Students who are going to appear for CBSE Class 12 Examinations are advised to practice the CBSE sample papers given here which is designed as per the latest Syllabus and marking scheme as prescribed by the CBSE is given here. Paper 7 of Solved CBSE Sample Paper for Class 12 Biology is given below with free PDF download solutions.

Question 3.
MOET is the programme employed for the herd improvement in lesser time. Which hormone is given to cow to induce follicular maturation?

Question 4.
Menstrual cycles in females are absent during pregnancy. Justify.

Question 5.
Mother secretes a yellowish fluid during the initial days of lactation. What roles does it play for infant?

Question 6.
Both mycorrhiza and cyanobacteria possess the similarity of fixing nitrogen yet differ from each other in some aspects. Discuss.

Question 7.
Mention the benefits that the female wasps derives from the fig trees by mutualistic interaction.

Question 9.
The bacteria growing anaerobically on cellulosic material to produce large amount of methane are called methanogens. Prepare a flow diagram to show the action of methanogens.
OR
It has been proved that the success rate of fertilisation is irhproved during the process of artificial insemination in animal husbandry programmes. How does this happen? Explain.

Question 10.
Jhum cultivation has been in practice from earlier days, but is considered more problematic these days. Why?

Question 12.
(1) What are the major techniques that had enabled the birth of modem biotechnology?
(2) What are the three basic steps in genetic modification an organism?
OR
Identify the different selectable markers ‘A’, ‘B’ and ‘C’ in diagram of coli vector given below. 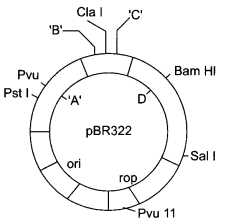 (3) How is the coding sequence of a-galactosidase considered better than the ones identified by you in the diagram? Explain.

Question 13.
Rohan, a plant breeder was interested in growing new and improved crop varieties in his field. His friend suggested him to cross different plants in order to get hybrid plants. Mention the process to get the improved variety of the following:
(1) Plants bearing bisexual flowers.
(2) Female parent producing unisexual flowers.

Question 14.
Hari was concerned about the stagnant water of his locality. He decided to take action regarding the issue. He advised his locality head that they should set up different plants to treat waste water. Mention the types of treatments to treat the same.

Question 15.
Pollen-pistil interaction acts as an essential step in fertilisation of all angiosperms which in turn determines the compatibility and incompatibility of pollen and a pistil. Describe the event how the pollen grain grows through the style of the female gametophyte. Explain briefly.

Question 17.
Transcription is considered to be more complex process in eukaryotic cells. Explain. 1+2=3

Question 18.
Populations or organisms of an ecosystem are connected to one another through a sequence of transfer of food and energy from one member to another. State the difference between the types of food chains found in different organisms.
OR

Question 19.
Various initiatives at international level were set up by the government for the conservation of biodiversity. Explain.

Question 20.
Draw a schematic sketch of pBR322 plasmid and label the following in it.
(1) Any two restriction sites
(2) Ori and rop genes
(3) An antibiotic resistant gene

Question 21.
What are fossils? List any two ways in which fossils support biological evolution of an organism.

Question 22.
Can a disease be detected before its symptoms appear? Explain the principle involved.

Question 23.
Rohan visited his grandfather’s village and saw on the way that people were cutting the roadside forests on a large scale. He asked his grandfather who told him that some America based organisation is estabilishing a factory there. Assuming yourself as Rohan, write some points highlighting the benefits of forest to encourage people out there to stop them from cutting of forests.

Question 24.
(1) The following is the flowchart highlighting the steps in DNA fingerprinting technique.
Identify the steps marked as (A-F).

Isolation of DNA from blood cell.

Cutting DNA by ‘A’

Separation of DNA fragments by electrophoresis using ‘B’

‘E’ of single strands with ‘D’

Detection of banding pattern by ‘F’

(2) What are the differences between DNA and RNA?
OR
How is Human Genome Project (HGP) advantageous for the mankind? Which objectives were associated with it? 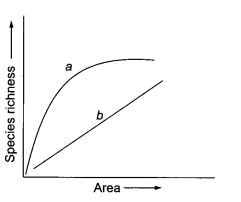 (a) If b denotes the relationship on log scale.

(b) Species diversity of plants (22%) is much less than that of animals (72%). Analyse the reasons for greater diversity of animals as compared to plants.
OR
What is the mechanism by which the AIDS virus causes deficiency of immune system of the infected person?

Question 26.
Answer the following.
(1) What depletes ozone in the stratosphere? How does this affect human life?
(2) What is El Nino effect? Explain how it accounts for biodiversity loss.
OR
Enumerate the effects of air pollutants on plants, animals and humans.

Answer 2.
Eco R1 stands for
E – Escherichia
Co – coli
R – RY 13 (strain)
I It indicates that it was the first enzyme being isolated from the bacterium E. coli.

Answer 4.
During pregnancy the release of gonadotropins required for the development of new follicles is suppressed due to the high levels of progesterone and ocstrogcns. Therefore, new cycles I cannot be initiated.

Answer 5.
It provides abundant antibodies (IgA) for passive immunity to protect the infant

Answer 7.
The wasp pollinates the fig inflorescence while searching for suitable oviposition (egg laying) r site whereas the fig provides the wasp some seed as a food for the developing wasp larvae.
Thus wasp get benefited in two ways by getting best site for egg laying and also obtaining food for nourishing its larvae.

Answer 8.
This means that the frequency of alleles of a gene or a locus is supposed to remain fixed and same from generation to generation. The gene pool always remains constant. Two factors that affects the genetic equilibrium are:
(1) Gene drift
(2) Genetic Recombination,

OR
The success rate of fertilisation  is improved  in animal husbandry programmes by the multiple ovulation embryo transfer (MOET) technology.

Answer 10.
Jhum, or slash or bum cultivation, is no more practiced as it reduces the nutrient quality of the soil, when practiced repeatedly. Chemical and bio-fertilisers yield for better results than restoring to primitive methods like Jhum Cultivation.

Answer 11.
(1) Phenotype and genotype of F1-generation 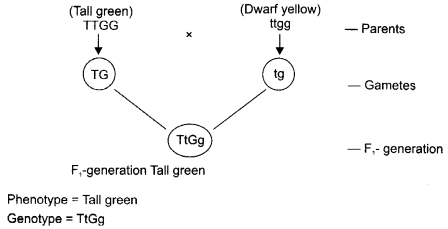 Answer 12.
(1) Major techniques that has enabled the birth of modem biotechnology are:
(a) Genetic Engineering: This technique alters the chemistry of genetic material (DNA and RNA) into host organisms and changes the phenotypic character of the host or­ganism.

(b) Sterilisation Methods: These methods are used to maintain the growth and manipula­tion of desired microbes or cells. It produces large quantity of products. For example, vaccines, enzymes, antibiotics, etc in sterile conditions.

(2) Three basic steps in genetic modification of an organism are:
(a) Identification of DNA with desirable genes and introduction of the identified DNA into the host.
(b) Maintenance of introduced DNA in the host.
(c) Transfer of the DNA to its progeny.

(3) Alternative selectable markers have been developed that differentiate recombinants from non-recombinants on the basis of their ability to produce colour in the presence of an enzyme (3-galactosidase which results into an inactivation of the enzyme. This is referred to as insertional inactivation.

Answer 13.
(1) Emasculated bisexual flowers are covered with a bag of suitable size generally made up of butter paper to prevent the contamination of its stigma with unwanted pollen. This process is called bagging which makes flower receptive. Mature pollen grains collected from anther of the male parent are then dusted on the stigma and the flower ares rebagged.
(2) No emasculation is needed in unisexual flowers. The female flower buds are directly bagged before the flowers open and when the stigma becomes receptive, pollination is carried out using the desired pollen and the flowers again are rebagged.

Answer 14.
There are two types of treatment to treat waste water.

(a) Primary treatment: It removes the physical particles from sewage by filtration and sedimentation. All solids that settle in setting tanks form primary sludge. Supernatant forms the effluents.

(b) Secondary Treatment: Effluent from the primary setting tank is kept in large aeration tanks where useful aerobic microbes grow into floes. Microbes reduces Biochemical Oxygen Demand (BOD) of sewage. Effluent is then passed into a setting tank to form sediment, called as activated sludge. A small part of activated sludge is pumped back into the aeration tank to serve as inoculum. Remaining of sludge is pumped into large tanks called anaerobic sludge digester. Anaerobic bacteria digest the other bacteria and the fungi in the sludge. Effluent, after treatment is generally released into water-bodies like rivers and streams.

Answer 17.
Transcription is considered to be more complex process in eukaryotic cells because it has additional complexities: First, there are atleast three RNApolymerase in the nucleus in addition to RNA polymerase found in the organelles. Secondly, the primary transcripts contain both the exons and the introns and are non-functional.

Answer 18.
Two types of food chains that are observed in the ecosystem. These are grazing food chain and detritus food chain.
Differences between the two are:


Answer 19.
Various initiatives which happened at international level for the conservation of biodiversity are:

Answer 20.
Preventive measures for diseases spread by contaminated food and water are: 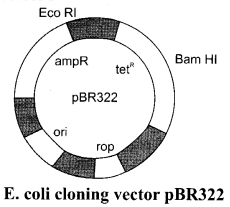 Answer 21.
Fossils are the remains of pre-historic organisms in sedimentary rocks or other media.
Two ways in which fossils support biological evolution are:

Answer 22.
Yes, detection of a disease before its symptoms appear can be possible by only amplifying the nucleic acids by the technique known as Polymerase Chain Reaction (PCR), which was not possible with conventional diagnostic tests.
A single DNA molecule can be copied endlessly using Primers, DNA polymerase enzyme, and free nucleotides under appropriate conditions in PCR.

Answer 23.
Forests are important for mankind because it helps to purify the air we breathe, mitigate floods and droughts, cycle different nutrients, generate fertile soils, provide and protect wildlife, maintain biodiversity, helps to pollinate crops, provide site for storage for carbon. From aesthetic, cultural and spiritual point of view, it is also not correct to cut down trees for our own benefits.

OR
Advantages of HGP:

Objectives of HGP are: 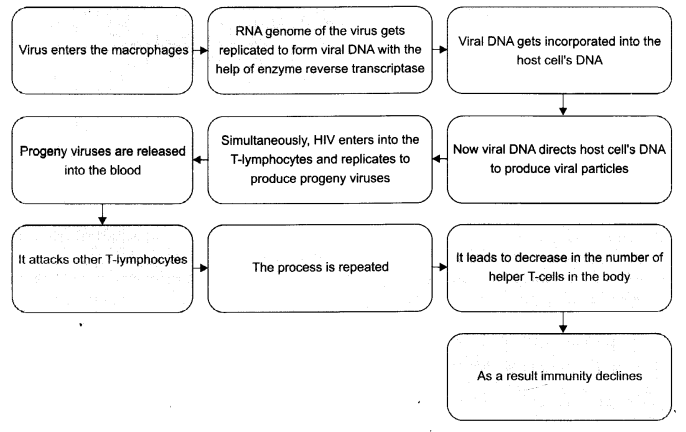 Answer 26.
(1) CFCs, i.e. chlorofluorocarbons, released primarily from refrigerators and other industrial emissions depletes the ozone in the stratosphere. It leads to more exposure of UV radiation, which is considered to be harmful for health of human life.

Effects of UV radiation on human health are:

(2) El Nino is an abnormal warming of surface ocean water in the Eastern Pacific Ocean. During El Nino, there is a movement of warm water to east, which causes bleaching and death of coral reefs. It changes the route of migration of birds, fishes and whales thereby, increasing risk for them. It is also known to be responsible for the sudden changes in rainfall pattern and drought. All this makes El Nino, a factor for biodiversity loss.

Effects of Air Pollutants:
1. On Plants

2. On Animals and Humans