Causes of World War 2 Essay: World War two was one of the biggest global wars of the twentieth century. It started in the year 1939 and continued till the year 1945. It had all the great powers of the world, dividing the war into two military alliances. The Allies were the countries like Britain, France, and the United States, while the Axis powers had Germany, Italy, and Japan.

The Soviet Union began the war on the Axis side but later changed stances and joined the allied forces. There are various socio-political causes of the Second World War. However, the immediate cause of the World war was the invasion of Poland by Nazi Germany on 1st September 1939.

We provide students with essay samples on a long essay of 500 words and a short essay of 150 words on the topic Causes of World war II.

The Second World war was an aftermath of the discontentment that arose among certain countries after the conclusion of the First World War. The first World War ended with the Treaty of Versailles in 1919. This treaty left Germany with little political and military influence and burdened the nation with heavy financial reparations. Germany was barred from unifying Austria and had to lose several territories.

With the Great Depression in 1939, Germany saw the rise of an autocratic Fascist ruler, Hitler, and his Nazi Party, alongside Italy and its fascist Government led by Mussolini. The Nazis attained a totalitarian character in Germany, driven by the idea of “supremacy of race.” Power craving Germany, Italy, and Japan soon took upon themselves to avenge their fallen territory. It hence was the beginning of World War II with the invasion of Poland by German forces.

Failure of the League of Nations:

The region of Sudetenland was a predominant German region with more than three million ethnic Germans. In the treaty of Versailles, Sudetenland was given to Czechoslovakia despite strong opposition. This angered the Germans.

Germany, under Hitler, pressed for the incorporation of Sudetenland into Germany.

Finally, the Munich Agreement was signed on 30th September 1938 by the British, French, and Italian Prime Ministers to appease Hitler and give him what he wanted. Sudetenland was given to Germany, but this did more harm than good. Germany regained its political and military strength.

In 1931, Japan faced a massive economic depression, and the people lost their faith in the Government. Hence, Japan turned itself into an imperial power and started capturing the resources and territory of Japan. This gave her authority over the East Pacific and made her crave for more.

Poland wanted to be in good relations with both Germany and the Soviet Union. However, Germany wanted Poland to join it as a satellite state. When Poland did not agree with this proposition, Germany invaded Poland on 1st September 1939 and triggered the Second World War.

During the time between 1936 and 1939, Germany and Italy supported the fascist General Francisco Franco while the Soviet Union started supporting the democratically elected state government. This became an issue among the world’s great powers since the League of Nations had a major involvement in the crisis.

These were the major causes of the Second World War. There are various major causes of the Second World War. However, the most notable was the aftermath of the First World War. To conclude World War I, the treaty of Versailles was signed in 1919.

However, this treaty was extremely biased towards countries like Britain, France, and the United Nations. Germany had to go through a loss of several territories and also was burdened with huge financial reparations.

Some other causes were the failure of the League of Nations, the Spanish Civil war, the Munich agreement, and mostly Japan’s rise as an imperial power. The immediate cause of World War II was the invasion of Poland by Germany on 1st September in 1939.

10 Lines on Causes of World War 2 Essay in English

1. World War II began in the year 1939.
2. It was triggered by the invasion of Poland by Germany.
3. The war was divided into two military alliances.
4. The two groups were Axis and Allied.
5. The war ended in the year 1945.
6. The war ended with the bombardment of Hiroshima and Nagasaki.
7. World War II witnessed the first use of Nuclear Bombs.
8. Re-militarization of Rhineland was a major cause.
9. The Germans were driven by the idea of the “Supreme Race.”
10. World War II led to the formation of the United Nations. 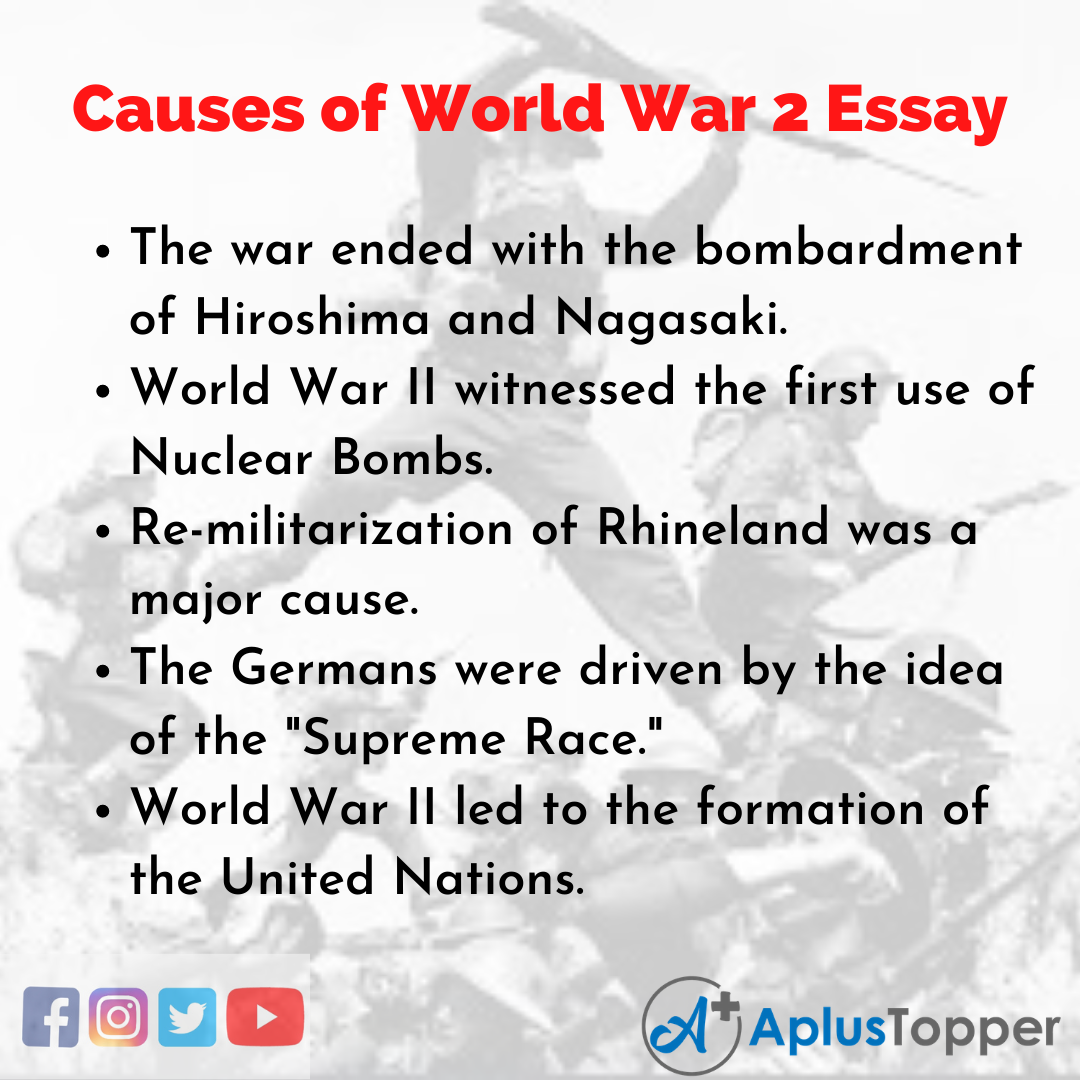 Answer:
World War II was initiated by Hitler and later resulted in his defeat.

Question 2.
Whose side was Russia on?

Answer:
Russia was an Allied force.

Question 4.
Was Spain a party to the war?

Answer:
No, Spain remained neutral as a country, but Franco supported Germany and the Axis powers.