Causes of the Great Depression Essay: One of the most devastating economic situations that occurred in the history of America is referred to as the Great Depression. It is known to have ruined the entire economy, destroyed the markets, and resulted in an increase in the unemployment rate.

The crashing of the stock market caused havoc and also affected each of the aspects of the economy. There was a shortage of money whereas the prices of all the goods increased drastically. This gradually led to the bankruptcy of several enterprises, companies, and banks. Besides, the actions and the measures taken by the government to be included in the system of the economy caused more significant damage. It also destroyed the economy.

We are providing students with essay samples on a long essay of 500 words and a short essay of 150 words on the topic Causes of The Great Depression for reference.

Long Essay on Causes of the Great Depression is usually given to classes 7, 8, 9, and 10.

The depression started due to the overpowering involvement of the government in the country’s economy and society’s everyday life. This was known as the most tragic and devasting period in history.

This period witnessed the havoc and crashing of the entire country’s economy. It was a frightening period that made the persons entirely overlook wealth, richness, and development of the previous decade since the conditions of living in this period was incredibly unfair, along with new problems and circumstances. The crash of the stock market took place in the year 1929. Back in the 1920s, the stock market witnessed a historical growth. Since the prices of the stock grew to a too high level, examining the stock market was eventually seen as the simplest way to earn money. Besides, several of the individuals had to mortgage their houses to purchase more stock.

The significant decline of the stock prices occurred in October 1929. This led to an instant spread of fear and panic amongst the shareholders. It resulted in the disbandment of their holdings which worsened the decline and increased the level of panic amongst the people.  During September and November, the prices of the stock reduced to around 33%. This created widespread fear and shock across the country. It also led to a decline in the economic confidence amongst the industries and customers.

Thus, the spending of the consumers on steady products along with the investments of the industries decreasing drastically. It gradually resulted in the reduced output of the businesses and increased the losses of jobs. This further reduced both investment and spending.  Another factor that is considered to be a cause of the great depression is the panics caused in banks and the reduction of financial growth. During the years of 1932 and 1930 US underwent a total of four banking waves of panic.

These four bank waves of panic led to the growth of the peoples few, which is why several clients tried to take out their deposits in cash. Since the banks can easily be destroyed with the growth of panic and terror amongst the people, it gradually led to the destruction of the banks.

The standard of the gold is also included in the increase of the Great depression beginning from the United Stated to few other countries. Since the US underwent a decreased level of output and deflation, the price range of its exports also reduced considerably. Also, the people in America were hardly purchasing any imported products. These imbalances eventually led to the growth of the gold outflows to the US. This resulted in the devaluation of the money of several countries where the reserves of gold had been exhausted.

Also, the rates of interests were increased by the foreign central banks in the hope of responding to the imbalance of trade. This affected the countries greatly by minimizing the output and prices and raising the rates of unemployment in their countries. Besides, the weakening of the economy was equally worse in Europe as that of the US. 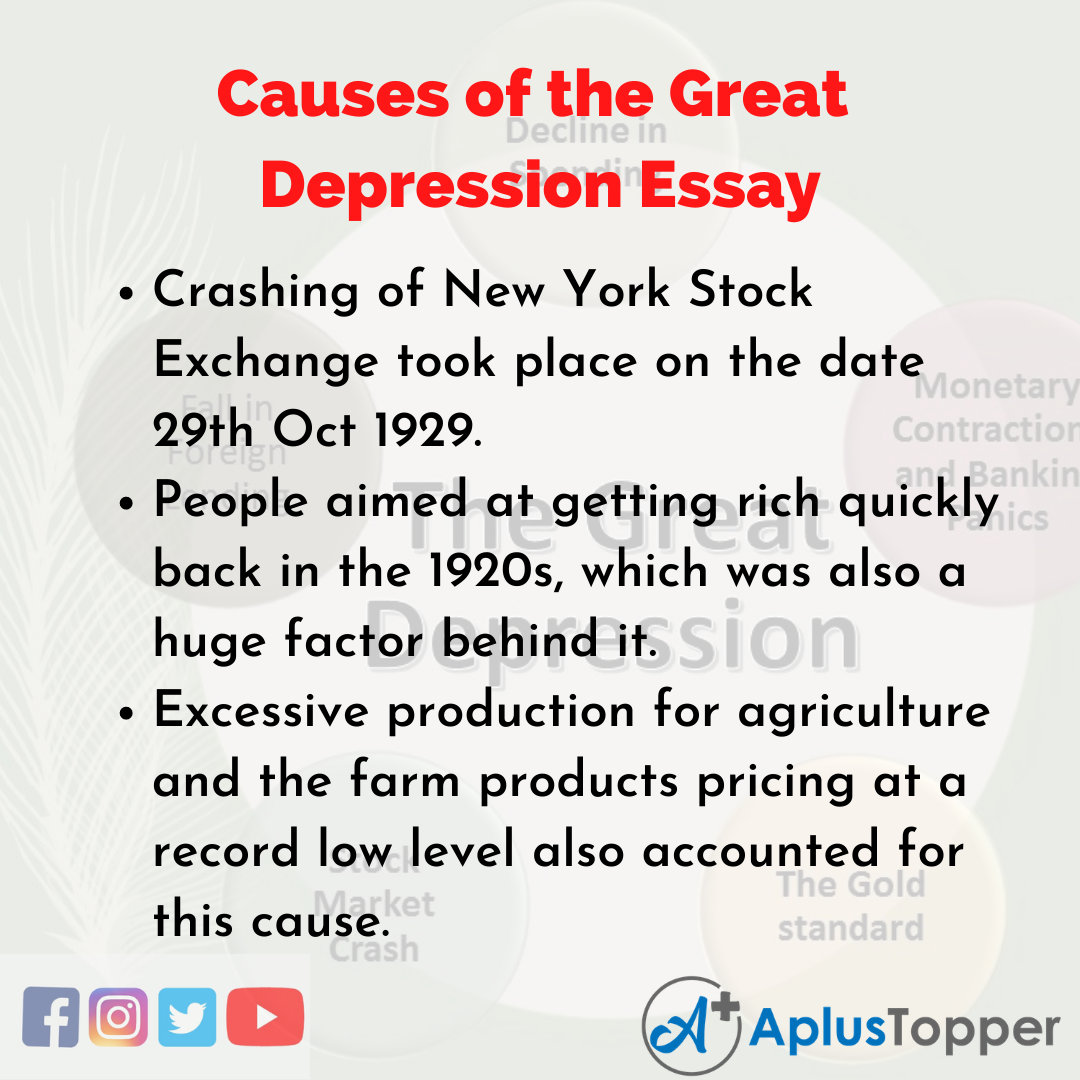 One of the most terrifying and serious economic downfalls in the modern historical background is known to be a great depression. This occurred in the late 1920s and 1930s. This lasted for around ten years and affected almost each of the country across the entire globe.

This phenomenon started with the continuous downfall of several industrial goods along with deflation. The number of unemployment in this period was extremely high. The drastic growth in poverty along with homelessness. The effects of the depression were fatal in the US during the years 1929 and 1933 when the production of the industries sharply reduced by 47%.

Besides, the GDP of the entire state decreased by a total of 30% along with a 20% decline in the rate of unemployment. However, there aren’t any accurate reasons behind the causes of the great depressions found by historians or economists. However, they highly believe that factors like declining international tariffs, destroyed stock markets, gold standard, and banking panics.

10 Lines on Causes of the Great Depression in English

FAQ’s on Causes of the Great Depression Essay

Question 1.
When did the Great Depression occur?

Answer:
The great depression started in 1929 in the United States.

Question 2.
How long did the Great Depression last?

Answer:
It lasted for as long as ten years.

Question 3.
Was the US the only state affected by the Great Depression?

Answer:
The great depression began in the US, but it eventually expanded across the globe.

Question 4.
What were the few causes of the great depression?

Answer:
Some of the major causes of the great depression were the panics in the bank, fold standards, etc.