Rectangular Or Cartesian coordinates of a point:

The French Mathematician and Philosopher Rene Descartes first published his book La Geometric in 1637 in which he used algebra in the study of geometry. This he did by representing points in a plane by ordered pairs of real numbers, called Cartesian coordinates (named after Rene Descartes). In this section, we shall see how points in a plane are represented by the ordered pair of real numbers. Cartesian coordinates of a point: 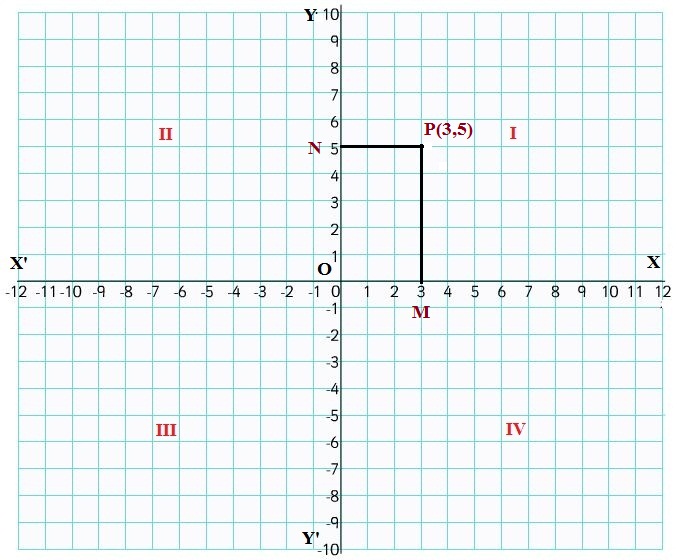 In order to plot the points in a plane, we may u the following algorithm:
Algorithm:
STEP I: Draw two mutually perpendicular lines on the graph paper, One horizontal and other vertical.
STEP II: Mark their intersection point as O(origin). The horizontal line as X’OX and the vertical line as Y’OY. The line X’OX is the x-axis and the line Y’OY as the y-axis.
STEP III: Choose a suitable scale on x-axis and y-axis and mark the points on both the axes.
STEP IV: Obtain the coordinates of the point which is to be plotted. Let the point be P (a, b). To plot
this point, start from the origin and move |a| units along OX or OX’ according as ‘a’is positive or negative. Suppose we arrive at point M. From point M move vertically upward or down ward through |b| units according as b is positive or negative. The point where we arrive finally is the required point P (a, b).
The following examples will illustrate the above procedure.
Example: Plot the following points on a graph paper:
(1) (3,4) 01) (- 2, 3) (iii) (- 5, – 2) (iv) (4, – 3)
Solution: X’OX and Y’OY be the coordinate axes. Then the given four points may be plotted as given below: