Bus Topology Advantages And Disadvantages: Bus topology is the simple form of network setup that involves computers and network devices including servers connected to a single cable. This central cable of the network is known as the bus which is considered the backbone of the system because it has all the control. The devices communicate with each other through this bus cable. A signal generated from the source travels to all workstations connected to the central cable. Only the intended recipient with a specific IP address receives the signal. Bus topology creates a simple localized area network that can be very effective for small area networks. Peripherals and computers can be added to this network in a linear fashion with a flexible length cable connection that is easier to be implemented.

A bus topology consists of a main central cable or ‘backbone’ as it is called, with a terminator at each end. All devices like workstations, printers, routers, servers, etc., are connected to the main cable through nodes in a linear configuration. The terminator is used at the end of the cable to absorb the signal thus preventing signal bounce. In Bus topology, each computer and network device connected to the single main cable receives a data signal at each node. The node checks the destination address with the IP address of the peripheral device and processes the data if it matches. In a bus topology, the source computer sends the signal that transmits through the cable length in both directions. This type of topology is very effective for small local area networks. 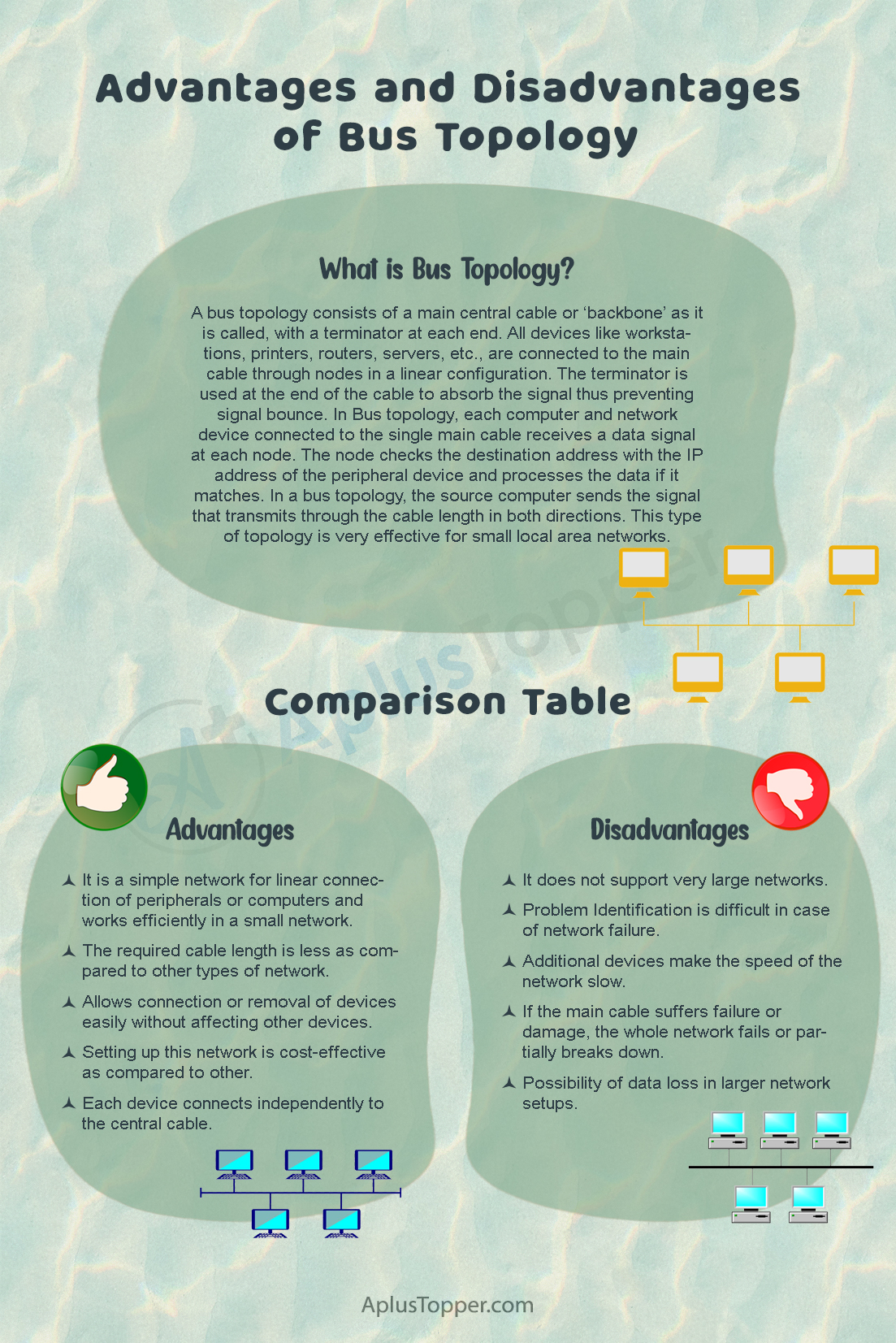 Additional devices slow the network: The bus topology allows every computer and peripheral to connect through a single central cable. So the addition of more devices tends to slow down the entire network. With more devices, there is a risk that collisions will occur within the network, and communication is affected. Speed issues may occur with a larger network using bus topology.

Size limitations: A bus topology generally has a limited length of cable, which causes a limitation to the number of nodes to be built on the network and restricts the connection of more computers to the network after a certain limit.

Limited Security options: In this topology, any computer connected to the central cable of the network will be aware of the data transmissions to the other computers from the source device. Each terminal has full access to every other terminal through the central bus. This makes it difficult to install security options on such a setup.

Higher maintenance costs: Although the installation of bus topology is cheaper, the costs of maintaining this type of network increases in the long run. This topology may not be an ideal choice when people are looking for growth and expansion of the network because it is not much scalable and involves extra cost over time.

Failure in the backbone can collapse the entire network: A failure in the central backbone cable may collapse the total network system because all computers are connected to the main cable. It becomes difficult to establish communication with the devices until the fault is repaired or the backbone cable is replaced. A break at any point in the central cable will cause computers to lose connectivity with devices on the other side of the network. This implies the vulnerability of this system with dependency on a single main cable.

Affecting the quality of the data: In large setups of bus topology, data quality issues can be experienced. Increasing the number of nodes on the network can have adverse impact on the quality of communication that occurs through this network and may result in data loss. This justifies the reason why the size of these networks is generally limited. It is also difficult to identify and troubleshoot issues of individual workstations.

Comparison Table for Advantages and Disadvantages of Bus Topology 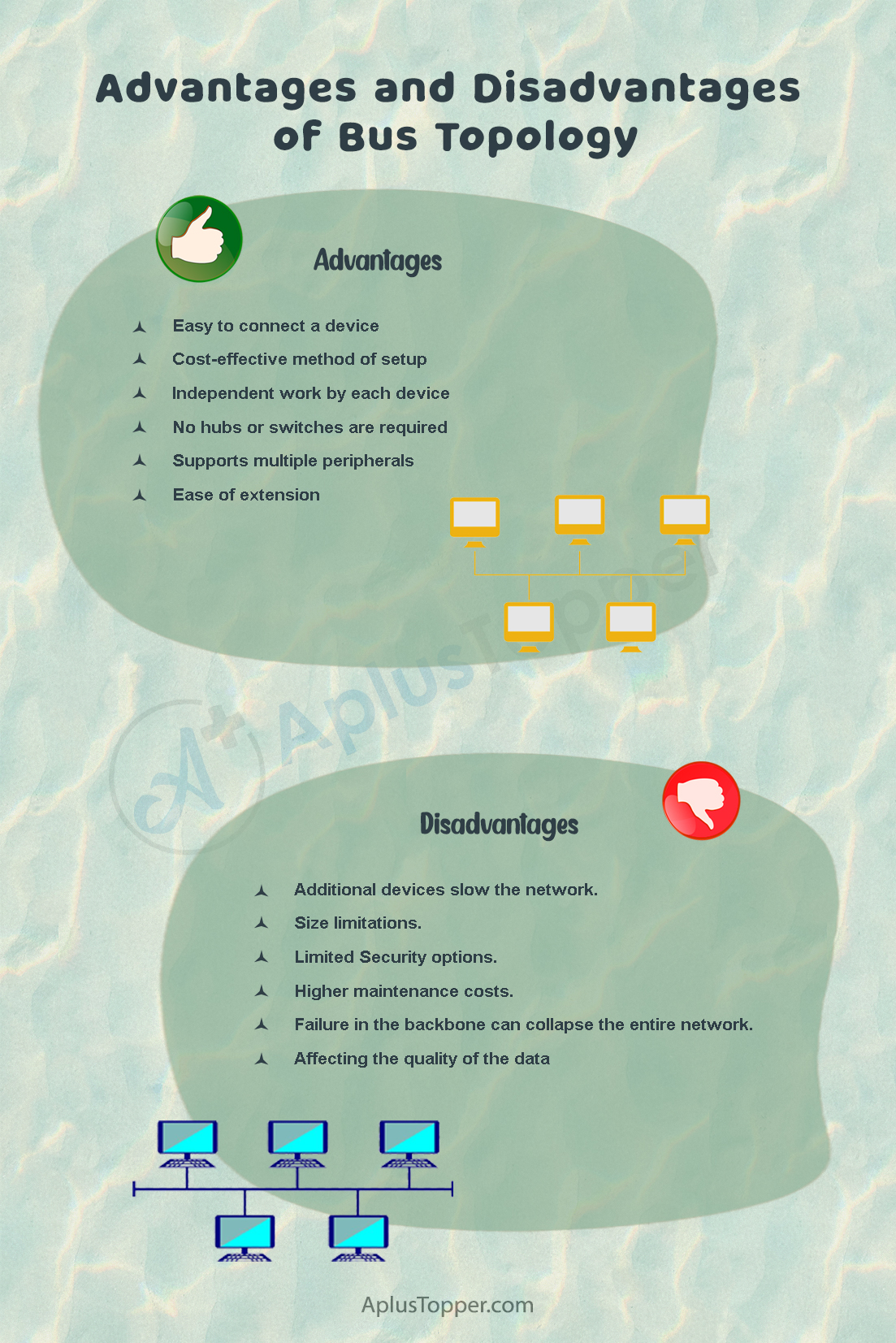 Question 1.
What does ‘bus’ stand for in Bus Topology?

Answer:
The ‘bus’ refers to the main central cable to which all the computers and other devices are connected.

Question 2.
Why is a larger network not efficient with bus topology?

Answer:
The speed of data communication in the bus network slows down with the increase in the number of devices connected to it, thereby reducing the efficiency of the system.

Question 3.
Why is the bus topology advantageous over star topology?