Breaking Social Norms Essay: Social norms are representations of collective acceptable group conduct and an individual’s perception of conduct in a particular group. Rules that prescribe to people what they should and should not do, given their social surroundings, are social norms.

Social norms are cultural products – that include traditions, values, and customs – representing an individual’s basic knowledge about what others are doing and what they should do. Violation of norms can result in formal punishment for the individual.

We provide students with essay samples on a long essay of 500 words and a short essay of 150 words on the topic Breaking Social Norms for reference.

Long Essay on Breaking Social Norms is usually given to classes 7, 8, 9, and 10.

In our society, every individual is expected to follow a specific unwritten set of rules or etiquette. Social norms are informal understanding governing the behavior of the society’s members. Social norms are unwritten rules for people about how to behave.

Norms are standard or representative value for a group. No one wants to feel unaccepted or outcast from a group or society; hence when people know that they are expected to behave in a particular manner, they tend to follow the unsaid rules to be accepted.

Social norms are a sociology concept, referring to the behavioral expectation a group or society holds from an individual. Social norms operate in both a small group – like a circle of friends – or a large group – like a national society. These norms can be implicit, something that everyone knows about, or explicit – e.g., written down as laws.

Breaking off a few social norms is considered a grave offense, and the person is subjected to formal punishment. People are punished by either being fined or imprisoned for breaking norms that disrupt a national society’s normal functioning. Sometimes people break social norms that are a part of cultural norms and don’t harm anyone, making them get a few stares or are shunned by others.

Social norms are usually enforced in a large national society to maintain law and order and a decent society’s functioning. Norms can be enforced formally through the proper existence of laws, informally – when the norm is known by everyone in the group, being communicated through body language, or any other non-verbal communication cues. When ignoring or breaking a social norm, one risks facing formal sanction or finding themselves unpopular o separated from a group facing social disapproval.

Social norms came into existence when people started grasping the concept of judgment by other people of the society, which led to a few unsaid rules that people are expected to follow. Patriarchy is an example of rules made by the male members of society as men believed that females are not capable enough to make their own decisions, let alone make decisions for society. This led to the existence of unspoken male domination in not only the society but also in families.

India is a country which has deeply rooted social norms that have been a part of the society for ages. India has a very interesting and old culture that is well-known worldwide; however, it comes to its norms, which people are expected to follow to be socially accepted. Social norms are widely spread worldwide but are more strict and culturally based in the Middle Eastern and South Asian countries.

Social norms start to become a problem when they serve as a restriction in letting people living their lives as they want to. The first step of making a change is becoming aware of social norms that are becoming restrictions and acknowledging them as a problem. Constructively addressing the norms will lead to solving many problems and still maintaining the proper etiquette in society. 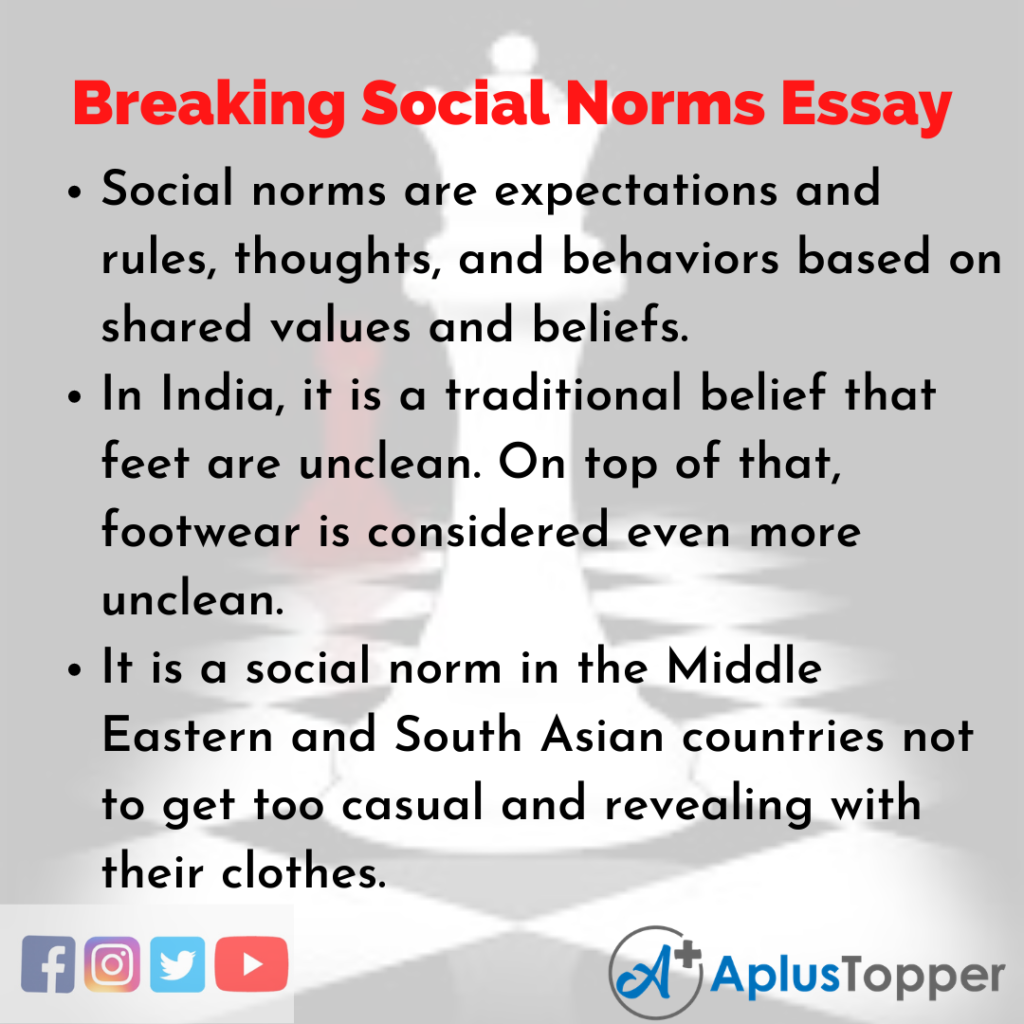 Social norms are unwritten rules based on beliefs and values, guiding people about what to do and what not to do. These sets of norms provide us with an expected idea of how one should behave in a particular culture or group.

Social norms are the standards that we live by, which are a set of shared expectations and rules that guide people’s behavior within a social group. Social norms are learned and reinforced by parents, friends, teachers, and others when living in society.

A social norm gives one the guideline about what to do in a given situation; breaking one such social norm can lead to the person being subject to formal punishment.

Social norms affect every aspect of one’s life – contributing to their clothing choices, the words one chooses to speak, one’s musical taste, and one’ s outlook on certain social issues.

1. Social norms are expectations and rules, thoughts, and behaviors based on shared values and beliefs.
2. In India, it is a traditional belief that feet are unclean. On top of that, footwear is considered even more unclean.
3. Violation of social norms can be punishable.
4. It is a social norm in the Middle Eastern and South Asian countries not to get too casual and revealing with their clothes.
5. Interrupting someone as they are talking is considered rude and breaking the social norm of respecting others’ turn to talk.
6. Dressing appropriately for the occasion, and the environment helps in maintaining the social norm for the scenario.
7. Indian’s consider their left hand to be unclean.
8. The act of violation of social norms is known as deviance.
9. Cultural believes they play a major role in determining social norms.
10. Society itself determines its social norms. Social standards are the standards that we live by. 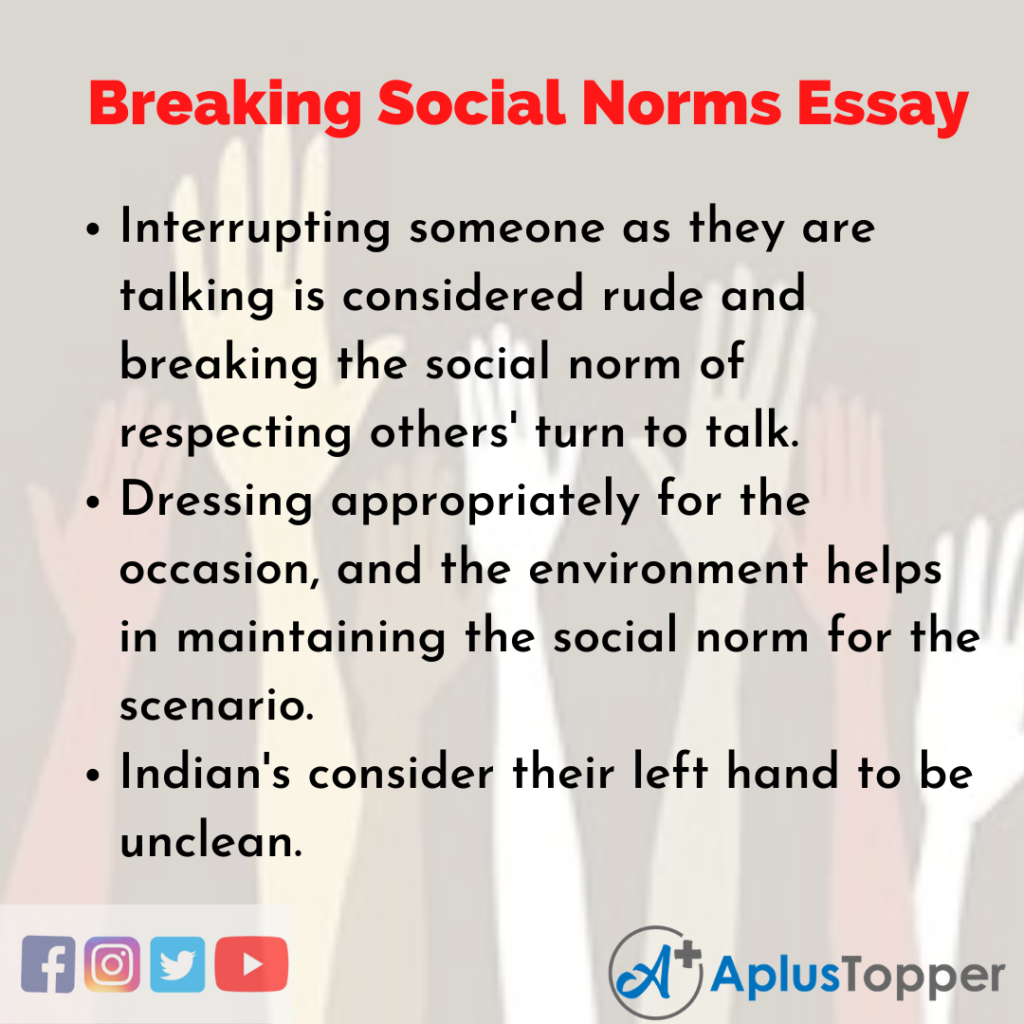 Question 1.
What are the four types of norms?

Answer:
Taboos, folkways, mores, and laws are the four types of social norms.

Question 2.
What is an example of a cultural norm in the US?

Answer:
Tipping service workers, waiters, bellhops, and valets is a customary and an example of the cultural norm.

Question 3.
What happens when one violates social norms?

Question 4.
What would life be like without social norms?

Answer:
With no social norms and no other factor guiding individual development, society would become chaotic with consequences of much slower community development and much slower intellectual. It would be much of a primitive existence.