Brave New World Essay: Brave New World is a novel by English author Aldous Huxley, written in 1931 and published in 1932, dystopian social science fiction. In which the citizens are environmentally engineered into an intelligence-based social hierarchy.

Primarily the novel anticipates huge scientific advancements in reproductive technology, sleep-learning, psychological manipulation and is set in a futuristic state of the World. The classical conditioning that is challenged by only a single individual: the story’s protagonist and combined to make a dystopian society.

We provide students with essay samples on a long essay of 500 words and a short essay of 150 words on the story of Brave New World for reference.

An era of infatuation with technology and comfort and the representation of the World State as the extreme culmination is referred to as the Brave New World By Aldous Huxley. Brave New World depicts the horror of human beings treated as machines manufactured on assembly lines and continuously monitored for quality assurance.

However, we understand that the same government control that provides peace and stability subjects also robs them of their essential humanity. The initial representation of John, the “savage” from New Mexico, is a kind of pure human being, one whose naturalness contrasts with the World State’s mechanization. However, Huxley undermines that interpretation, demonstrating that John has been socially conditioned just as the World State inhabitants have and that his conditioning leads to his downfall.

Today’s society is similar in how people are focused on feelings, the here and now, what you want, and what makes you feel right. Though everyone is conditioned to some extent, one can be glad that one experienced love, real joy, suffering, pain, or real emotions, not just interim ones.

Making your own decisions that will help you lead to genuine happiness. One grows and experiences real joy, love, and relationships when the person learns to deal with the hard things in life. In Brave New World, by Aldous Huxley, produce a deeper understanding of characterization and theme of a manufactured world where everyone disguises and teaches you never to sacrifice genuine emotions for artificial ones.

Brave New World forewarns the dangers of new and powerful technologies and giving over the state control. The distinction between technology and science is significant to be recognized. The betterment of technology, not increased scientific exploration and experimentation, is what the State means when it talks about science and progress. The results of scientific research, which contribute to control technologies, but does not support science itself, is what the State’s means when it claims its focus on happiness and stability.

It is important to understand that the story of Brave New World is a satire made on the society in which Huxley existed, and which still exists today and not merely just a warning about what things could go wrong to society. While at first appearance, World State citizens’ attitudes and behaviors are bizarre, scandalous, or cruel many clues point and the World State is defined as a society equated with economic growth and prosperity seem to have the ability to satisfy the needs and success.

In 1984, the control was maintained from before birth and last until death through technological interventions, changing what people want. By constant government surveillance, secret police, and torture, power is depicted in Brave New World. By making the citizens so happy and superficially fulfilled without caring about their personal freedom, the government of Brave New World retains control and maintains power through force and intimidation. In Brave New World, the consequences of state control are a loss of dignity, morals, values, and emotions—in short, a loss of humanity.

Aldous Huxley’s novel not only gives the warning to reject technology in favor of natural living but also ask to carefully examine what “natural” might genuinely mean. It’s a depiction of our society, its Reservations, and the State of the World’s naturalness and representation of its supreme values, which defines natural in a way that suits each of those communities’ needs. 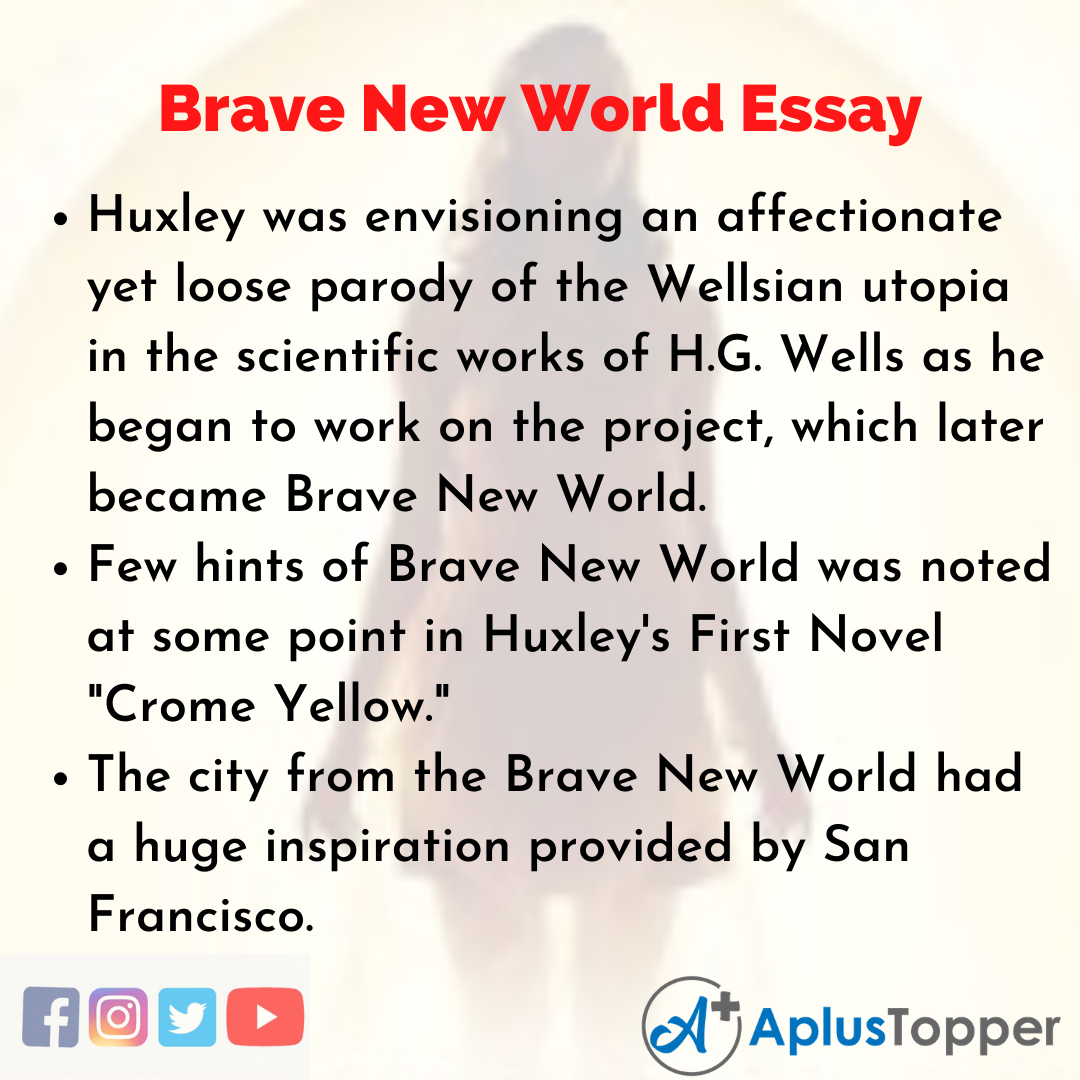 Aldous Huxley refers to an era of infatuation with technology and comfort and the World State’s representation of the extreme culmination in his Brave New World. Huxley’s story depicts the horror of humans being treated as machines manufactured on assembly lines, and humans continuously monitored for quality assurance.

Everyone is conditioned to experience love, real joy, suffering, pain, or real emotions at some point in their life; one can be glad that they did not have just the interim ones. It helps make decisions as one grows and experiences real joy, love, and relationships when the person learns to deal with the hard things in life and will help them lead to genuine happiness.

Huxley depicts our society, its Reservations, and the World State naturalness and representation of its supreme values, which defines natural in a way that suits each of those communities’ needs and asks to carefully examine what “natural” might genuinely mean.

1. Huxley was envisioning an affectionate yet loose parody of the Wellsian utopia in the scientific works of H.G. Wells as he began to work on the project, which later became Brave New World.
2. Few hints of Brave New World was noted at some point in Huxley’s First Novel “Crome Yellow.”
3. On his boat way from Singapore to the Philippines, Huxley happens upon a copy of Henry Ford’s 1992 manifesto ‘My Life and Work,’ which gave Huxley a significant character in the society created in Brave New World.
4. The city from the Brave New World had a huge inspiration provided by San Francisco.
5. The Billingham Manufacturing Plant in Stockton-on-Tees, North East England, made its mark on the novel.
6. An Indian-British Scientist, Physicist, Geneticist, and Biologist named J. B. S. Haldane has been credited with influencing Huxley in Brave New World Setting.
7. With all of his interaction and all these influences, Huxley completed the novel in just four months in 1931.
8. Huxley’s Brave New World was accused of partly deriving and plagiarising from George Orwell’s ‘We.
9. The book Brave New World by Aldous Huxley was banned in many countries like Ireland and Australia in 1932 and India in 1967.
10. In the first TV adaptation of the book in a movie, broadcast on NBC in 1980, Lenina’s last name was changed to “Disney.” 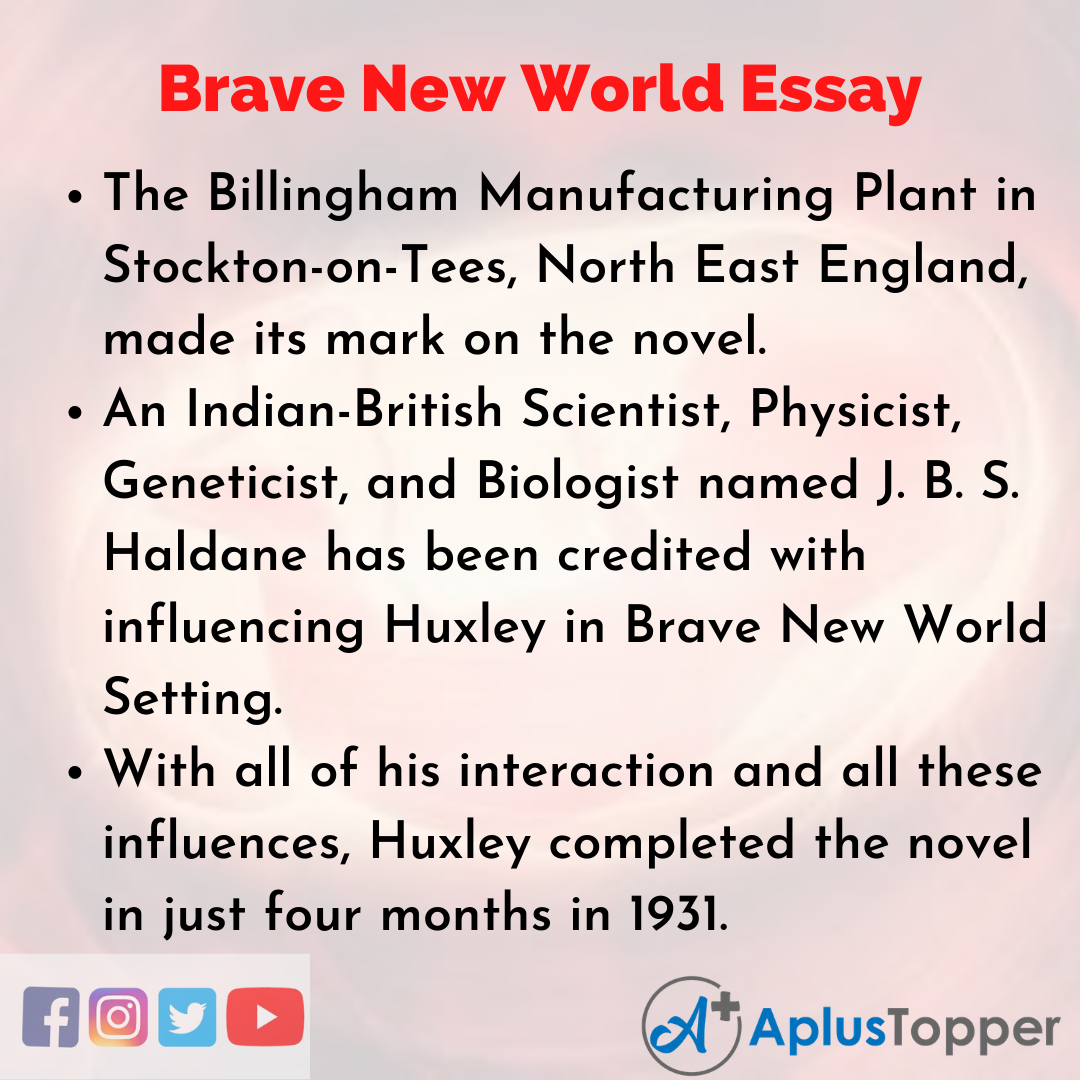 Question 1.
Why is Brave New World a banned book?

Answer:
A parent had complained that the book has a “high volume of racially offensive derogatory language and misinformation on Native Americans.

Question 2.
Is Brave new world drama based on a book?

Question 3.
What year is the brave new World set in?