Border Wall Essay: In the severely populated border areas such as Texas, San Diego, El Paso, and California, where the US Border Patrol was strengthened in 1995-96, due to illegal immigration, several miles of sturdy fences and sensors were installed.

Some of the operations focused on the region where the majority of undocumented people entered the United States. The Border wall was introduced to reduce the illegal activities at the US-Mexican border.

We provide students with essay samples on a long essay of 500 words and a short essay of 150 words on the topic Border Wall for reference.

The United States and Mexico’s border is one of America’s most debated issue today. The major part of the problem is the entering of foreigners without any entry pass or immigrant visa, and this issue is commonly known as an illegal immigrant.

President Trump’s solution was known as the ‘Border Wall,’ but this did not stop people from wanting a better life. This process was introduced to keep the people of America safe from terrorists and other dangers faced by the world, but every approach has its advantages and disadvantages.

Although the barrier along the US-Mexico border has already started being built, many think that it should not continue as the building cost is prohibitive, the environment is harmed. There is a significant drop in immigration rates.

During his presidential campaign, President Trump predicted that the cost of building the fence is going to be about twelve billion dollars. Still, the Department of Homeland Security (DHS) reported that it is about twenty-two billion dollars, which may also be an underestimate due to the high costs of materials and the money which is to be paid to the workers building the border.

The way the United States defined its relationship with Mexico and the border directly affects almost 12 million people living within 100 miles from the border. Although the border wall was majorly being built due to illegal immigration, another major cause of building was the smuggling of drugs through underground tunnels. The plan was to create a thirty-foot-tall wall and a six-foot-deep tunnel underground, but the DHS believes that it’s not possible. Also, smuggling tunnels can be as deep as seventy foot underground, due to which it is not possible to stop smuggling drugs even if the wall is built.

According to the researches done over years, it is shown that the barrier border which is suited between the United States and Mexico has interrupted movements and distribution of animals like bighorn sheep and the ferruginous pygmy owl in such a way that could isolate small populations of big mammals in Arizona including pumas and black bears. The wildlife will be inhibited from moving naturally within their natural habitats, and the ecology will also be disrupted by building the wall.

Humans will also be severely affected if ecology’s flow is disrupted, but the Trump administration ignored the environmental consequences. As the individuals who enter the United States come in with visas and live longer than their visit than those crossing the border without permission, the billion-dollar wall cannot stop undocumented immigration.

For the 2017 year, the Trump Administration has considered hiring 5000 more agents, increasing their budgets for hiring, maintaining, and training these agents, which estimates approximately 328 million dollars. The budget for the year 2018 estimates up to 1.884 billion dollars.

The main interest of the United States is to change the viewpoint on immigration as inclusive immigration reform and aid to these underdeveloped countries would be more justifiable for its own and other countries. 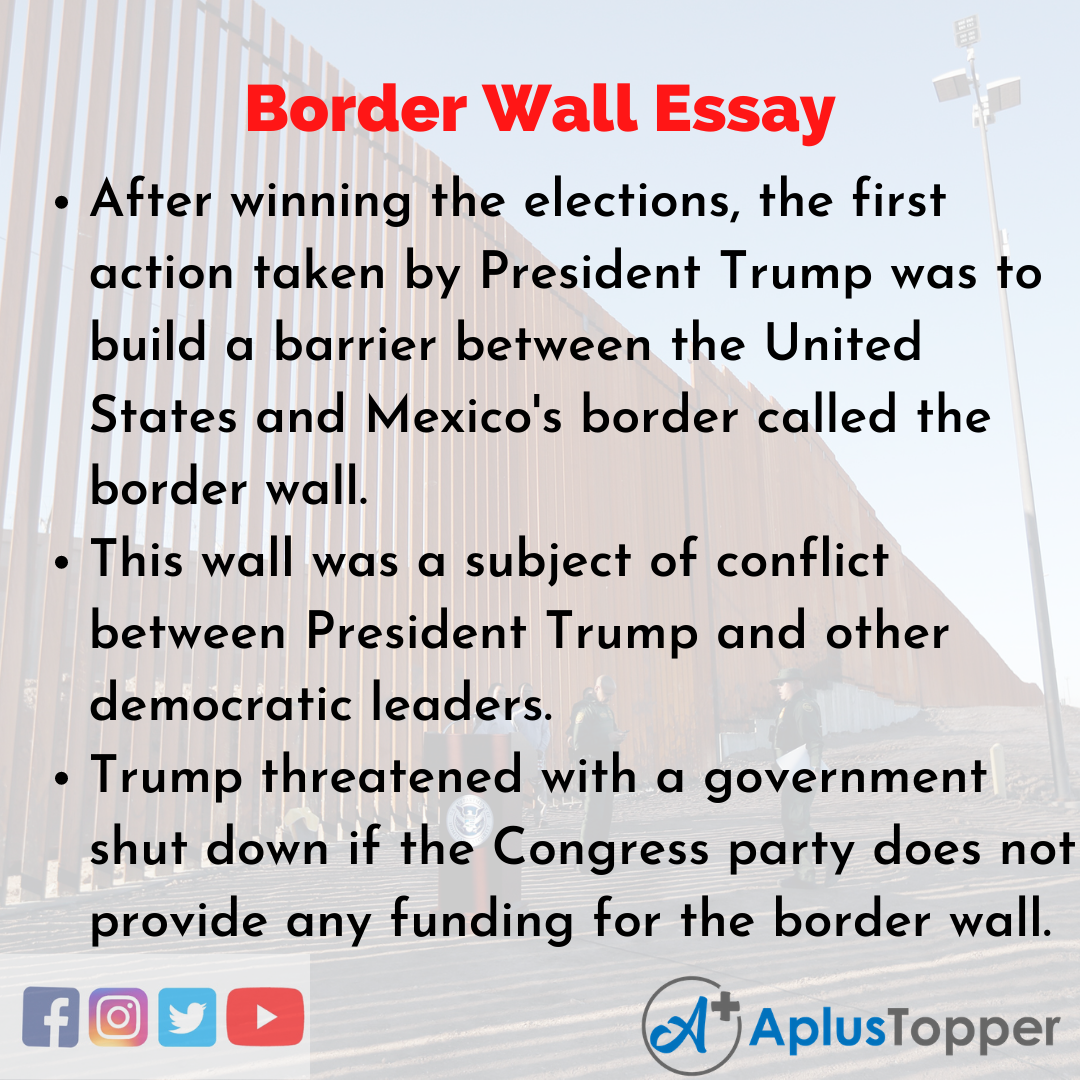 After President Trump’s main campaign, there have been many controversial talks about the United States-Mexican state border, which he proposed to build to stop illegal immigration and drug smuggling. Stretching from the Pacific Ocean to the tip of Southern Texas, the US southern border with Mexico is 1933 miles long.

The illegal immigrants of the country have taken on the responsibility of augmenting the American economy. According to the ACLU, also known as the American Civil Liberties Union, the immigrants receive about 5 billion dollars of welfare, whereas they pay more than 11 billion each year.

Although the actual statistics show that the standing Americans’ welfare benefits from undocumented immigrants, President Trump claims otherwise. The unwanted by legal Americans are taken up by illegal immigrants, increasing the economic stance of America.

1. After winning the elections, the first action taken by President Trump was to build a barrier between the United States and Mexico’s border called the border wall.
2. This wall was a subject of conflict between President Trump and other democratic leaders.
3. Trump threatened with a government shut down if the Congress party does not provide any funding for the border wall.
4. According to Trump, the estimated cost of the whole process was up to 12 million dollars, whereas the actual cost projected was 5 billion dollars, which became a topic of controversy among people as, according to them, the money could have been put to better use.
5. Although he promised to build the wall during Trumps’s election and force Mexico to pay for it, the President of Mexico said that they would not pay for the wall.
6. A government shutdown took place along with the national emergency declaration to get the money for building the Border Wall.
7. Executive Order 13767 was signed by Trump in January 2017, which directed the US government to start constructing the wall using existing federal funding.
8. According to Trump, the initial plan in September 2019 was to construct about 500 miles by the end of the year 2020.
9. Strong winds blew over a few meters of the wall under construction before the poured concrete foundations hardened in January 2020 in Calexico, California.
10. On October 29th, 2020, it was reported that only 400 miles had been built, among which about nine miles of the wall was replaced from the existing outdated barriers. 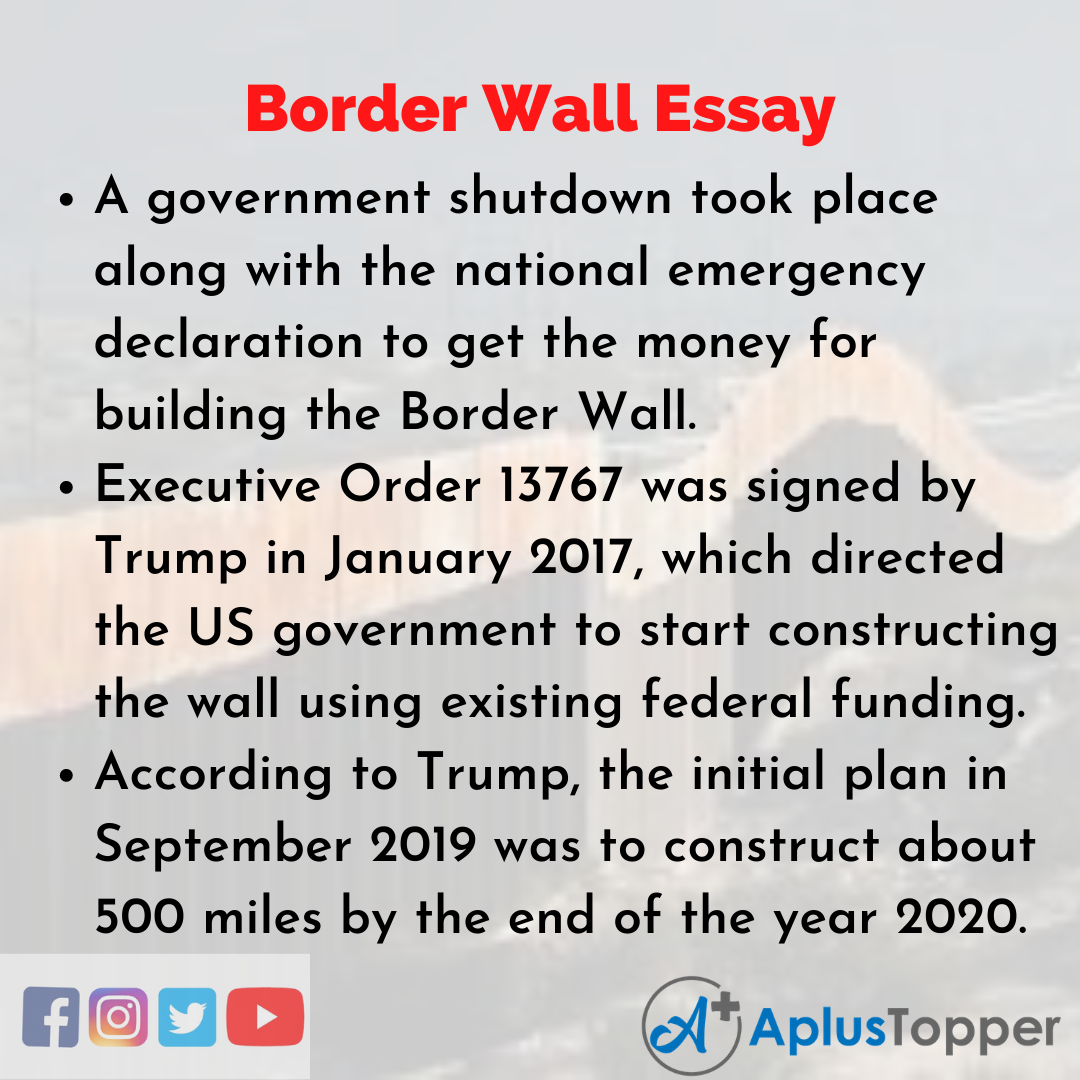 Question 1.
For how many days was the government shut down to get the funding of the Border Wall?

Answer:
The government was shut down for 35 days, and a national emergency was also declared to get the funding for the Border Wall.

Question 2.
Who built the Border Wall on the private property near El Paso, Texas?

Answer:
A private organization named We Build the Wall, with the encouragement of Trump, constructed under 5 miles of the new wall on the private property.

Question 3.
What are the main disadvantages of building the border wall?

Answer:
The main disadvantages of building the US-Mexican border wall are:

Question 4.
How long is the entire US-Mexico border?

Answer:
The approximate length of the US-Mexican border, which is one of the most crossed borders in the world, is about 1954 miles (3145 km).