Bill Clinton Impeachment Essay: Bill Clinton was the 42nd President of the United States Of America. His impeachment was initiated on 8th October 1998. His impeachment proceedings were on the grounds of “high crimes and misdemeanours.” Notable charges against him were “lying under oath” and “obstruction of justice.”

He was the second US President ever to be impeached, the first being Andrew Johnson who was impeached in 1868. The charges stemmed from a lawsuit of sexual harassment filed against him by Paula Jones and from Clinton’s denial of a sexual relationship with Monica Lewinsky, a white house intern.

We are providing students with essay samples on a long essay of 500 words and a short essay of 150 words on Bill Clinton’s Impeachment.

Long Essay on Bill Clinton Impeachment is usually given to classes 7, 8, 9, and 10.

Bill Clinton was the 42nd President of the United States of America who was impeached in December 1998.

In 1994, Paula Jones filed a lawsuit again Bill Clinton accusing him of sexual harassment when he was the Governor of Arkansas. In late 1997, a woman named Linda Tripp started recording conversations between a White House intern Monica Lewinsky and herself. In these recordings, Lewinsky disclosed her sexual relationships with Clinton.

These recordings were given to Jones’s attorney. However, Clinton decided on any sexual relation with her until late 1998 when he decided on a settlement.

With the approval of the United States of America Attorney General Janet Reno, Ken Starr, an independent counsel, conducted a wide range of investigations on all the allegations like the Whitewater controversy and the firing of White House Travel agents. Starr made a lengthy investigation, which according to a lot of people, was politically biased. He presented a report called the ‘Starr Report’ to the Congress. Star also concluded that Clinton had committed perjury.

Impeachment by the House of Representatives:

In the November 1998 House Elections, the Democrats picked up like five seats, yet the Republicans held a majority. Impeachment proceedings began after the elections. Since Starr had already investigated and produced a report, no major investigations were conducted by the house.

On 11th December, three impeachment articles, grand jury, perjury, and obstruction of justice were agreed to be sent to the full house. Later the fourth article for abuse of power was also introduced. Though proceedings were delayed due to the bombing of Iraq, Clinton was finally impeached by the House of Representatives on 19th December 1998, on the grounds of perjury to a grand jury and obstruction of justice.

Articles of the senate:

Article 1- It charged Clinton with perjury. It was alleged that on 17th August 1998, William Jefferson Clinton swore to tell the truth and the truth only. However, he wilfully gave false and misleading testimony on several issues:

He lied about the nature and details of his relationship with a subordinate government employee.
He gave false and misleading testimony in a civil rights lawsuit brought against him.
He allowed his attorney to testify falsely as well as misleading facts to the federal judge of his civil rights lawsuit.
He also tried to hamper shreds of evidence and influence the witnesses.

Article 2- Clinton was charged with obstruction of justice. This also included several acts:

All these led to a vote of impeachment, and he was finally impeached. However, Clinton continued in office for the remaining of his second term. Bill Clinton was the 42nd President of the United States of America. He served for two terms and was I peached on 19th December 1998. His impeachment was initiated by a civil lawsuit on sexual harassment, which was filed by Paula Jones. Though initially, it couldn’t gather much evidence, the case completely turned after a White House intern Monica Lewinsky diverged his secret sexual relationship with Clinton.

Several other allegations were brought against Clinton during the time. An independent counsel named Ken Starr took up a detailed investigation of all these allegations. After an expensive investigation, he concluded with his Starr Report that Clinton was guilty of perjury.

In the year 1998, just after the house elections, impeachment proceedings began. Three articles were presented to the house for voting, and they were the grand jury, perjury, and obstruction of justice. Later an article on abuse of power was also added.

Clinton did not receive any major support and was finally impeached by the House of Representatives. However, he continued serving the remaining two years of his second term. 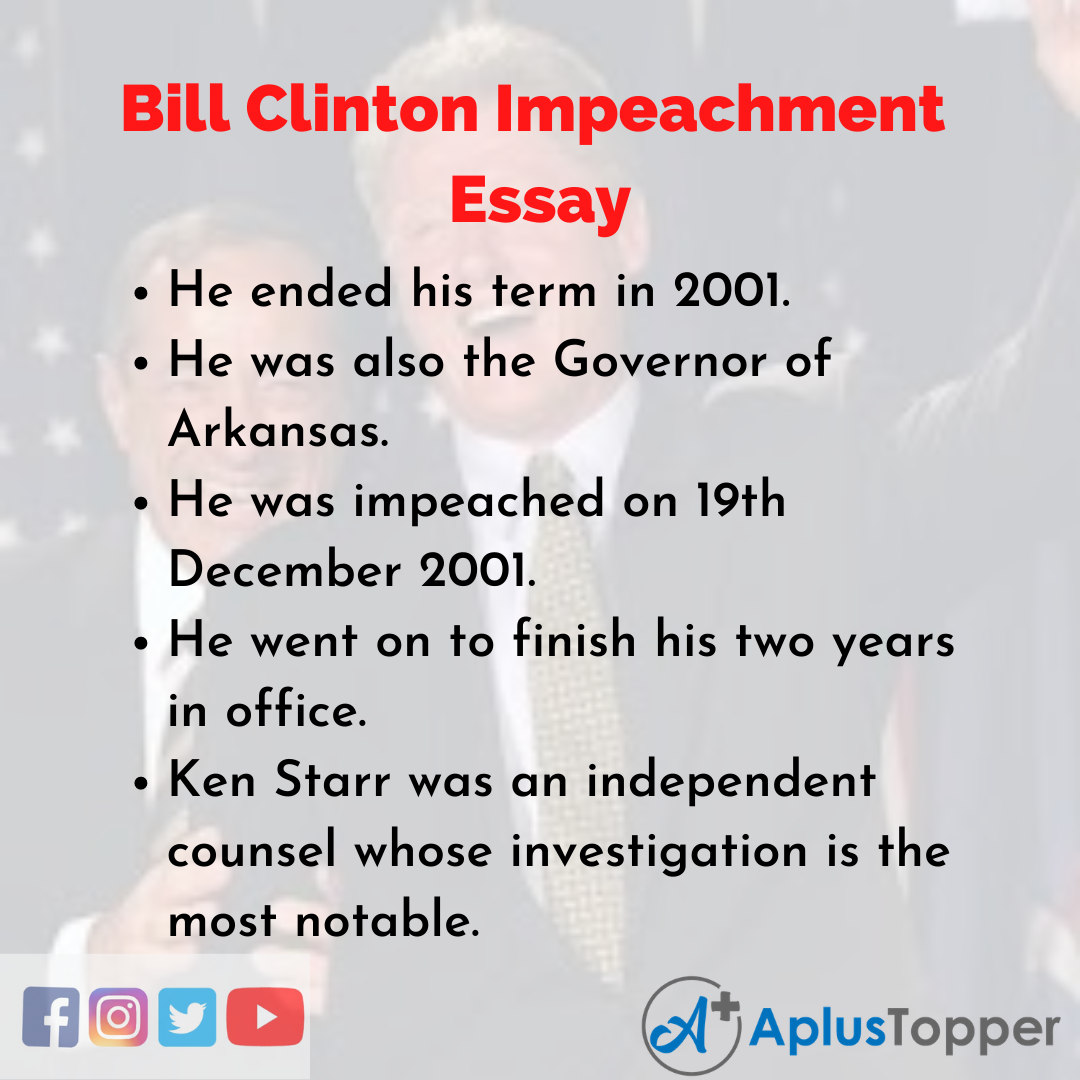 Question 1.
Was Clinton removed from office?

Answer:
No, he wasn’t removed from office.

Question 2.
Which party did he belong to?

Answer:
He belonged to the Democratic Party.

Question 3.
How long did he hold office?

Question 4.
What initiated his impeachment proceedings?

Answer:
A lawsuit of sexual harassment by Paula Jones initiated his impeachment crisis.