Bhagat Singh Essay: One evening, a 3 years old boy was walking besides his father along the edge of a field. Looking and pointing at the vast field, he said, “Father, I shall grow guns all over the field.” This little boy was Bhagat Singh, whose heart was soaked in patfiotism even at that tender age. He grew up to becom one of the foremost heroes of the freedom struggle who laid down his life happily for the sake of his country.

Below we have given a long essay on Bhagat Singh of 500 words is helpful for classes 7, 8, 9 and 10 and Competitive Exam Aspirants. This long essay on the topic is suitable for students of class 7 to class 10, and also for competitive exam aspirants.

Bhagat Singh was the third son of Sardar Kishan, who himself was a revolutionary and Vidyawati. He was a brilliant pupil, and cordial by nature. He used to say, “Everyone in the village is my friend.” He would ask his classmates what they wanted to become when they grew up. And he would state his wish as, “I will drive the British out of India.”

In the year 1919, when he was only 12 years old, he got deeply disturbed by the Jallianwala Bagh tragedy. He brought home a bottle of mud soaked in blood of the victims and worshipped it. He dropped out from school and took part in the Congress Movement. He actively supported the Swadeshi Movement. He would wear only Khadi and burn foreign clothes.

When Gandhiji withdrew the movement due to Chauri Chaura incident, his faith in non-violence weakened. He wondered where were the supporters of non-violence when a 19 years old revolutionary Kartar Singh was hanged by the British. He started believing that armed rebellion was the only way out. He studied the lives of revolutionaries of Ireland, Italy and Russia, and was convinced of his stand.

He joined National College which was patronised by great patriots like Lala Lajpat Rai. In the day time, he would attend classes and in the evening he would discuss about the revolution with his friends. He established contacts with the leader of Bengal revolutionary party, Sachindranath Sanyal. The condition to join the party was that the member should be ready to leave home when called. He agreed and left home in the wake of his impending marriage. He reached Kanpur and sold newspapers for a living. A revolutionary Ganesh Vidyarthi got him a job at his periodical office. He had to return home due to his grandmother’s illness. He supported Akali Dal’s meetings.

He went to Lahore and became secretary of Naujawan Bharat Sabha. He was arrested as police suspected his hand in the Dussehra bombing case. Two wealthy men bailed him out. After running his father’s dairy for a while, he left for Delhi. Here, he met Chandrashekhar Azad. He shaved his beard and kept short cropped hair. Thereafter, he learnt bomb making from Jatin Das at Kolkata. At Agra, they set-up a bomb factory. They themselves starved, but continued with their activities. 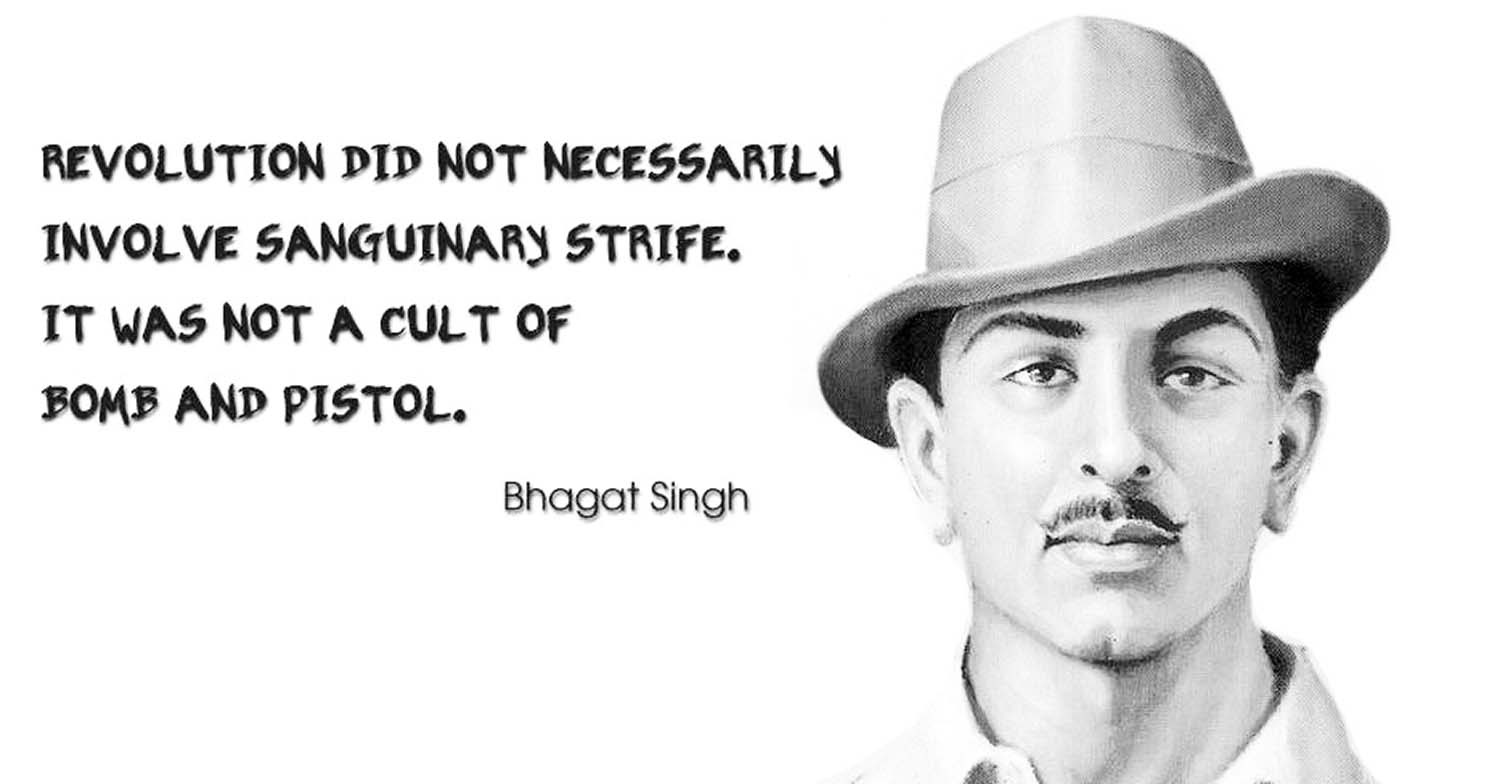 Below we have given a short essay on Bhagat Singh is for Classes 1, 2, 3, 4, 5, and 6. This short essay on the topic is suitable for students of class 6 and below.

In 1928, Lala Lajpat Rai died in a Lathi charge. Bhagat Singh and Rajguru shot Sanders to avenge his death. In 1929, he and Dutt threw a bomb at the Legislative Assembly Hall in Delhi, but they did not intend to kill anyone. Chanting “Inquilab Zindabad”, they surrendered. In Mianwali jail, he witnessed discrimination between European and Indian prisoners and led other prisoners in a hunger strike to protest against this. They demanded equality in food standard, clothing etc.. Finally, he, Sukhdev and Rajguru were ordered to be hanged on 24th March, 1931, but the schedule was preponed and they were hanged on 23rd March 1931 at 7:30 p.m in Lahore jail.

Even on that day, they were fearless and competed with each other to be hanged first. Kissing the rope, they died with the chant of ‘Bharat Mata Ki Jai’ on their lips. So in this way the three champions of the freedom struggle sacrificed their lives. That day, no one in jail touched food. Everyone cried. Their bodies had been secretly burnt on the banks of Sutlej. Even today, the undying spirit of Bhagat Singh is a source of inspiration for the youth of the nation. His unflinching dedication to free his nation, would be embossed in golden ink in the history of freedom struggle.