Beowulf Essay: Beowulf is seen as one of the greatest ancient English poems. The poem is difficult to understand as it is written in Anglian and West Saxon dialects. The poem consists of 3,182 alliterative lines.

The poem is considered greatest as it portrays perfectly the life in the days it was written. This poem was written when poems were stories and narrations about the heroes and gods like those from the Bible.

We provide students with essay samples on a long essay of 500 words and a short essay of 150 words on the topic Beowulf for reference.

Beowulf is seen as the most important and epic works of Anglo-Saxon literature written in Old English. Among the scholars, the date of the poem’s configuration is a matter of contention—the only certain data relating to when the manuscript was produced between 975 and 1025.

The story of Beowulf is set in the 6th century in Scandinavia. The hero of the Geats named Beowulf comes to the aid of the Danes king, Hrothgar, whose mead hall present in Heorot was under attack by a monster named Grendel.

After the death of Grendel caused by Beowulf, Grendel’s mother also attacks the hall, and she is also defeated. Beowulf then victoriously returns to his home in Geatland and becomes the king of Geats. While defeating a dragon fifty years later, Beowulf was mortally wounded. His attendants cremate his body after his death, and then they erect a tower on a peninsula in his memoir.

The poem explains the tribal history of the Jutes, Angles, and Saxons after the Roman Empire came to an end. The poems are taken from the Bible, Caedmon, and Cynewulf, other than Beowulf, mainly religious. The main character Beowulf has his origins from an early pagan era, even though the author who wrote the written version of Beowulf was considered to be a Christian.

Some authors refer to Beowulf as an elegy not just for how it was written but also because of what it was about. The poem is only existing in a single copy in the manuscript named Nowell Codex. The original manuscript has no title, so it has come to know by the name of the story’s main character. The Nowell Codex can now be found in the British Library.

If someone has to interpret Beowulf, they will observe that Beowulf’s pride, along with his desire for worldly prosperity and self-glory, places him in the earthly place. However, his seeming unselfishness and love towards his country’s people are features worthy of someone who belongs in the place where God lives.

As an ideal hero, he involves himself in battles that he always wins except one, and he has the strength to face and battle a monster that has defeated all individuals. He fears nothing, not even death, and possesses a unique physical strength; also, he is always prepared to sacrifice for his people’s welfare despite his old age as an ideal king.

Although at first glance, it might seem that Beowulf achieved his success solely due to his incredible physical strength, but later on, it is clear that he also had strong morale and the readiness for a wise ruler in the future. 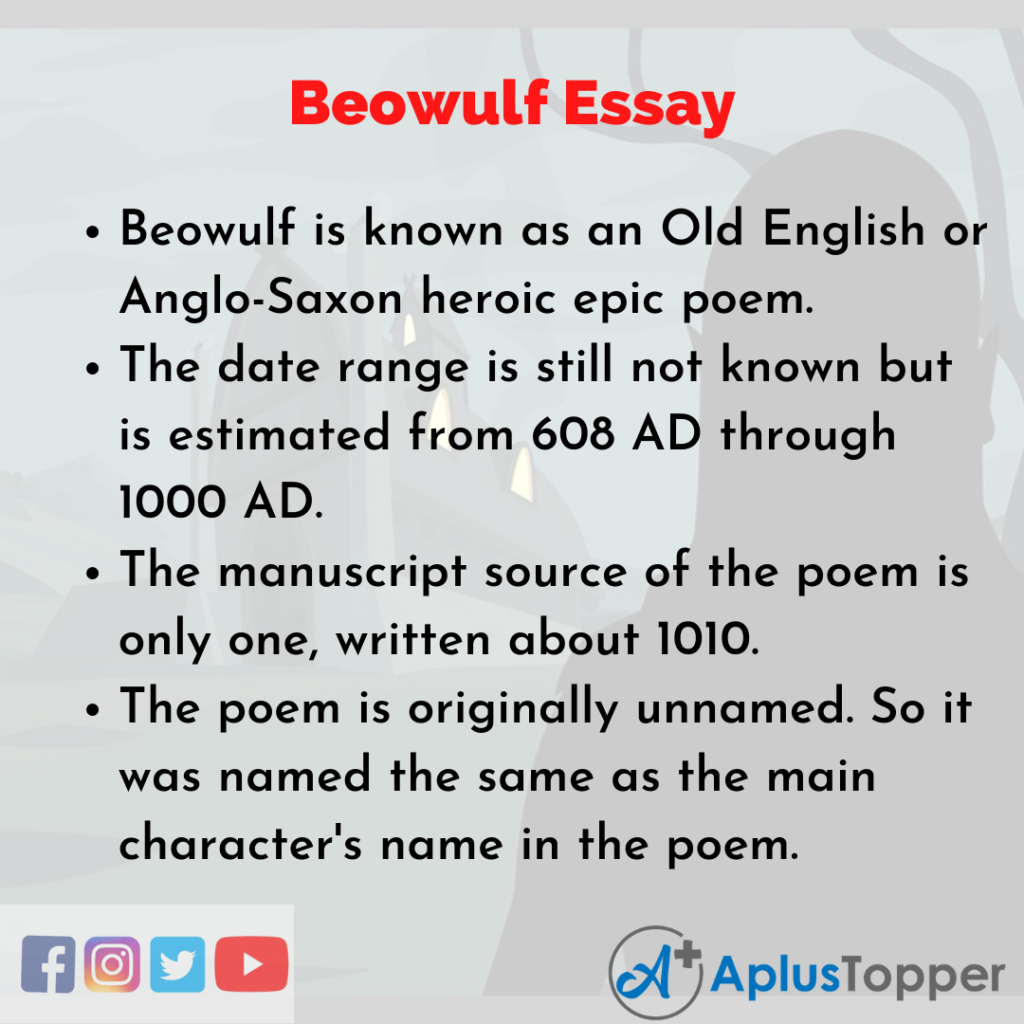 Beowulf, the epic Anglo-Saxon poem, takes place in a society where courageousness and valor are computed through noble yet violent actions. Paganism heavily influences the morality in Beowulf.

Bravery acts with righteous motivations is maintained by Pagan beliefs, which attains courage and glory. Even if they are defeated, these acts define an individual as a hero. Although the dragon slew Beowulf at the end of the poem, he was still known as the hero by Pagan and modern standards and was not a failure in any regard because of his willingness to sacrifice himself for his people.

Although some scholars may see Beowulf as materialistic, his intentions were noble, and he successfully defeats his enemies. Beowulf’s original manuscript, which survived in a single copy in the manuscript named Nowell Codex, was destroyed by a fire in the Ashburnham House that had the assortments of primitive manuscripts collected by Sir Robert Bruce Cotton. Still, now it survives in the British Library.

10 Lines on Beowulf Essay in English

1. Beowulf is known as an Old English or Anglo-Saxon heroic epic poem.
2. The date range is still not known but is estimated from 608 AD through 1000 AD.
3. The manuscript source of the poem is only one, written about 1010.
4. Total lines present in the poem Beowulf are 3182 lines.
5. The poem is originally unnamed. So it was named the same as the main character’s name in the poem.
6. The poem tells about the hero and the ideal king named Beowulf, who was ready to sacrifice his life for his people.
7. As Old English is difficult to understand, in 1940, Tolkien illustrates and describes all the poem’s characteristics in his essay.
8. Many movies and books adapted the ideas and themes of Beowulf.
9. The main verse form of the poem is the Alliterative verse.
10. The poem’s subject deals with Beowulf’s battles, the Geatish hero in his youth, and old age. 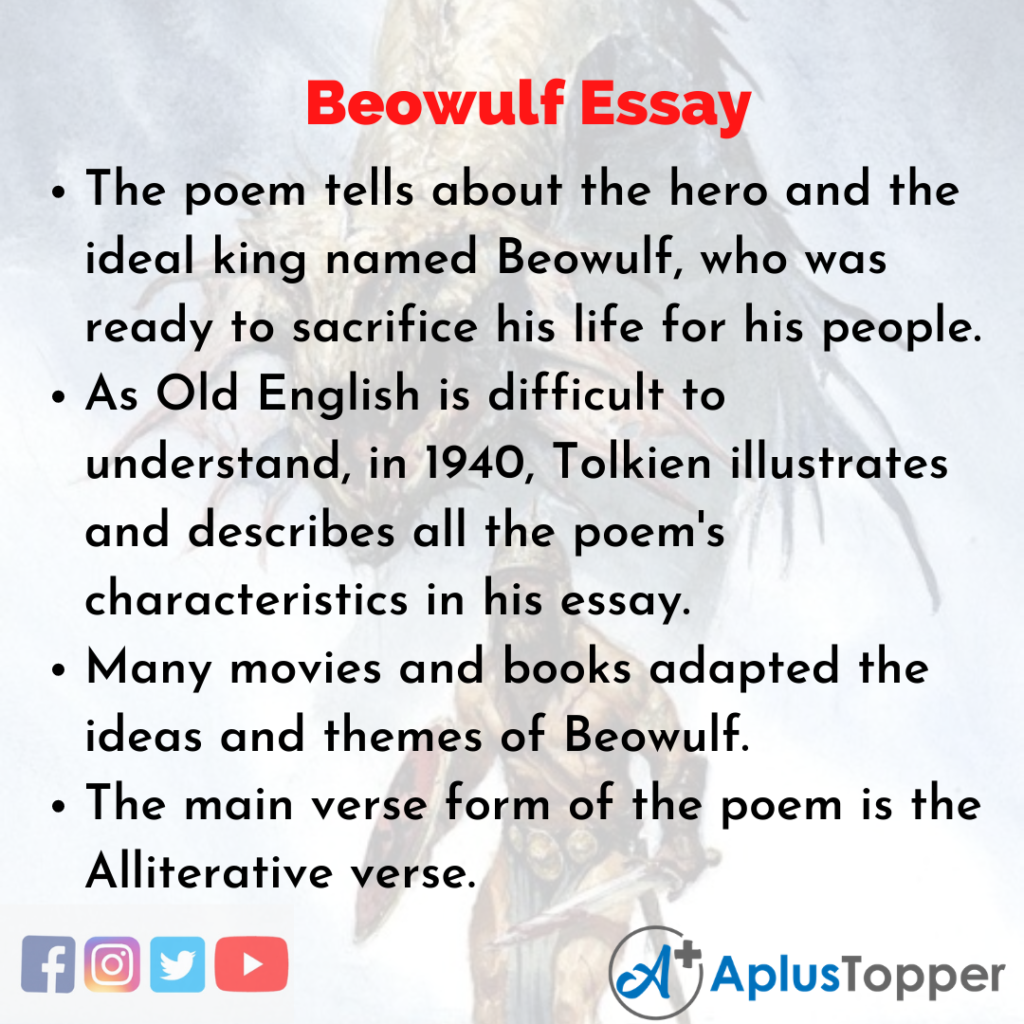 Question 1.
Who is the poet of the poem Beowulf?

Answer:
Beowulf’s poet is still unknown, so the scholars refer to the anonymous poet as the ‘Beowulf poet.’

Question 2.
When was the manuscript of the poem Beowulf first printed and by whom?

Answer:
The manuscript of the poem was first printed in the year 1815 by Thorkelin.

Question 3.
Is Beowulf based on a real person?

Answer:
There was no evidence found which proved Beowulf was real, and some scholars speculate as to whether or not the poet of Beowulf completely created him or not.

Question 4.
What is the cause of Beowulf’s death?

Answer:
Beowulf’s death was caused due to a deadly wound from the unnamed dragon. But the main cause of his death was his past and his pride, which blinded him to reality where he was an aging king who did not have the same strength and bravery, making him a catastrophic hero.