Beauty Definition Essay: It is probably the hardest task in the word to define the term “Beauty.” There’s a popular saying that beauty lies in the eye of the beholder. The saying throws light on the fact of how there are different perspectives of beauty and how it differs from person to person. Beauty can be vaguely defined as a specific characteristic that an individual or an animal or a place or an idea; holds.

The characteristic is precisely one of pleasure which also attributes to people getting attracted to it. “Beauty” is a human-made concept and also a psychological one. No physical or animated attribute makes someone or something beautiful.

We are providing students with essay samples on a long essay of 500 words and a short essay of 150 words on the Definition of Beauty.

Beauty, as defined by the English language, is a special characteristic that animate objects like humans, animals as well as inanimate or abstract objects like places and ideas can also possess.

The characteristic held by the objects which are termed “beautiful” must give pleasure to the ones perceiving it. Since pleasure and satisfaction are two very subjective concepts, beauty has one of the vaguest definitions. It differs from people to people as there can be several perspectives of looking at beauty as a concept. Beauty, the concept falls under the study of psychology, sociology as well as culture. It is a dynamic concept and has no stable viewpoint.

Ancient Greece- The concept of beauty can be traced back to ancient Greece. The classical Greek word that is the nearest to the meaning or translation of beauty was “kallos.” The word “Kallos” meant something good something of fine quality. It was also mostly used as a titillating connotation.

In the koine Greek, “beauty’ was also associated with the word “hour” which give us the perspective that it has some relation to time. Anything “of the hour” was considered beautiful.

The pre-Socratic period also had the Greek philosophers believing in the concept of beauty. The Pythagorean school found mathematics which was perfect and proportional to be beautiful. This idea of the proportional beauty has also been conveyed to the Greek architecture. Early Greek architecture is always based on geometric proportion and symmetry. Ancient Greece and Rome are also the generators of the idea of “classical beauty.” Greek and Roman sculptures were all well-crafted with distinct physical features. This portrayal of the human body prevalent during the Renaissance of Europe solidified the foundation and the idea of “classical beauty.”

Middle-Ages:In the idle ages, the idea of “beauty” was mostly portrayed through then gothic catholic churches like the Notre-Dame de Paris. Philosopher Thomas Aquinas believed that there are three aspects of beauty: ‘integritas’ which means ‘wholeness’, ‘consonantia’ meaning ‘proportion and harmony’ and ‘claritas’ meaning ‘clarity and radiance.’

Age of Reason- The age of reason brought with itself a new way of looking at the concept of beauty. It was a deviation from the classical ideal of ancient Greece and Rome. It gave less importance to physical appearances and more focus on the philosophical aspect of it. Immanuel Kant also divided the concept into “free beauty” which is mostly concerned with than nature and “merely dependent beauty” which is the beauty of the human body.

Romantic Period:The romantic period saw the emergence of writings and poems, all focusing upon the varied perspectives of the beauty of nature. It had poets like Keats and Wordsworth who turned beauty into something ethereal and sublime.

The 20th Century saw the deviation of thinkers and philosophers from the concept. There was a wave in the post-modern world to defy all the standards of beauty.

It popularised the view that boldness, confidence and personality are the aspects that make someone or something beautiful. Beauty has become more dependent on the virtues and qualities that a human possesses rather than the physical attributes he or she has. The notion of “Everyone is beautiful,” has become the anthem of the post-modernists. 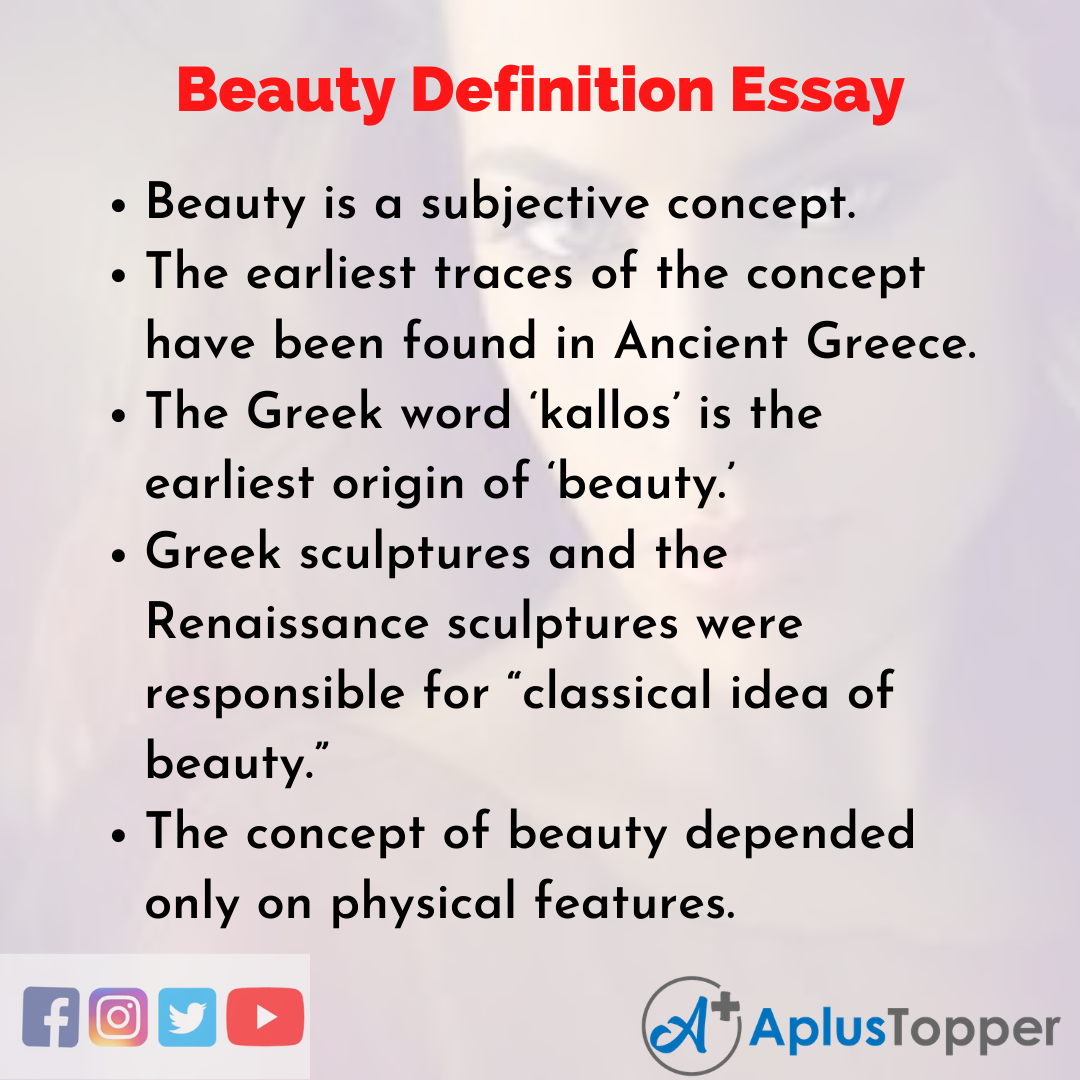 The concept of beauty is one of the hardest to be defined. It depends on several aspects and can also be looked at from different viewpoints. It is often said that beauty lies in the eye of the beholder. This saying is perfectly applicable to the concept because what one man finds attractive can be considered unattractive by the other.

Beauty is a human-made concept which traces its origin even back to ancient Greece and Rome. The word “kallos’ was synonymous to beauty in ancient Greece.

The pre-Socratic period also considered mathematical proportions and geometric symmetry to be beautiful. The “classical idea of beauty” also emerged from the Greek and Roman sculptures which gave more importance to physical attributes. The age of reason came with the renouncement of beauty as a defining concept and turned it into more of a philosophical aspect. Lastly, the post-modernist approach of the 20th Century has defied any physicality in the concept and believes in the notion, “Everyone is beautiful.”

10 Lines on Beauty Definition in English 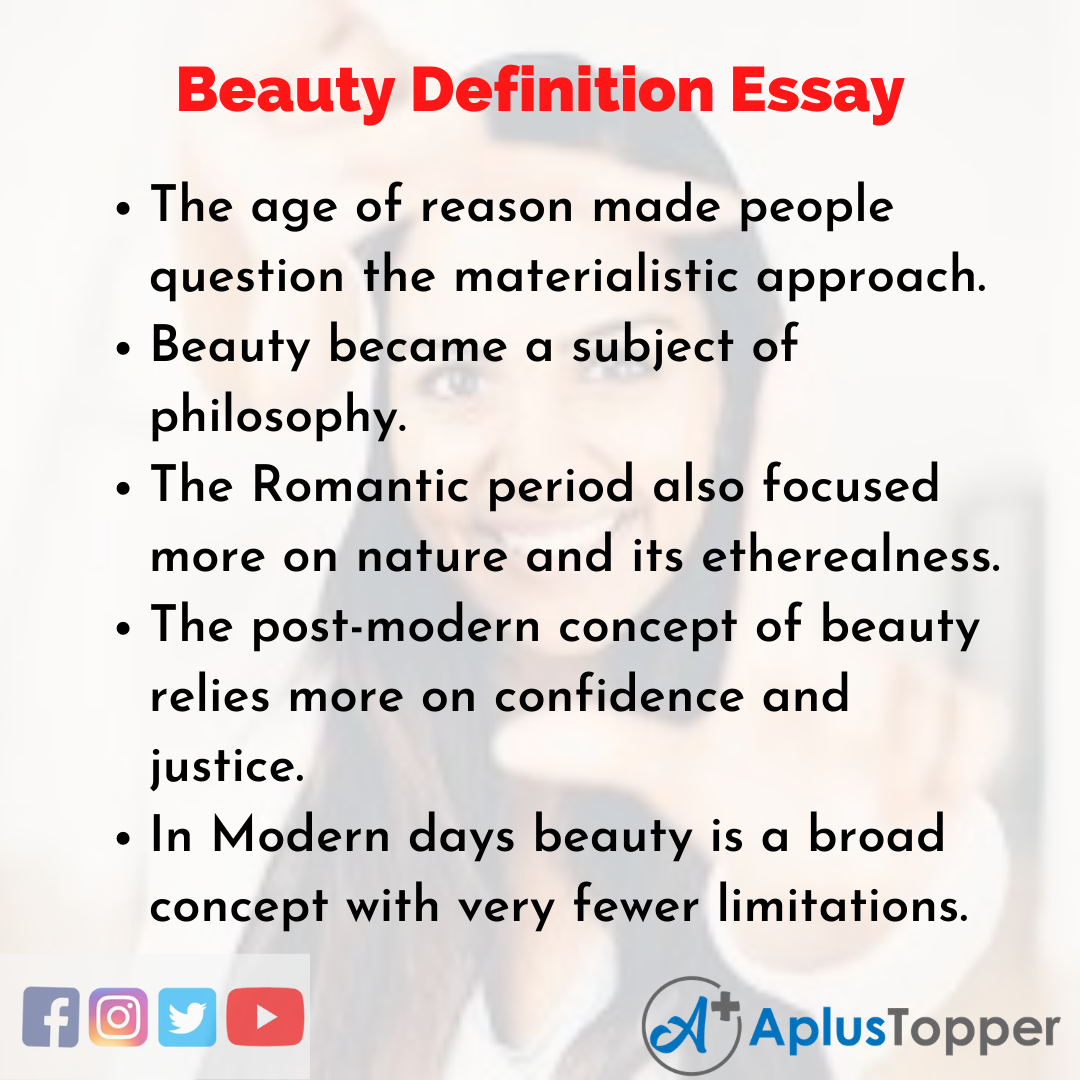 Question 1.
What was Thomas Aquinas’s concept?

Question 2.
Who are some Romantic poets?

Answer:
William Wordsworth, John Keats, P.B Shelley are some of the romantic poets.

Question 3.
Can beauty be defined?

Answer:
The definition of beauty is a tricky concept as it differs with perspective.