Autism Essay: Autism, also known as autism spectrum disorder (ASD), is a neurodevelopmental disorder. Problems with communications and social interactions, along with repetitive and restricted behaviour, are common in autism. The associated factors of autism include genetics and specific environmental influences.

Autism includes a wide range of disorders of which, Asperger syndrome, childhood disintegrative disorder and pervasive developmental disorders have been added recently. The symptoms of autism occur before three years in a child, as observed by doctors.

We provide students with essay samples on a long essay of 500 words and a short essay of 150 words on the topic Autism for reference.

Autism is a complex neurodevelopmental disorder and affects a person’s responsive and interactive behaviour. It requires sensitivity and a certain intensity of the traits that affect social development for diagnosis. Autism includes persistent deficits in social communication and interactions. People who have autism also face difficulties in social and emotional reciprocity and a reduced interest in sharing emotions or feelings and often fail to respond to social interactions. Autistic people often face difficulties in maintaining, developing, or understanding relationships. They exhibit poorly integrative verbal or non-verbal communications and abnormalities in making eye-contacts and body language.

Autism is characterized by stereotypical and repetitive movements, phrases and words, and reactions along with inflexible adherence to a particular routine. The abnormal intensity of attachment with unusual objects is often seen in autistic people, and they are hypersensitive to small changes around them. The symptoms of autism result from changes related to maturation in different brain systems. The mechanisms of autism can be divided into two ways. The pathophysiology of the brain structure and associated processes regulates the behavioural characteristics. There are individual neurophysiological connections between the brain and behaviours also.

Autism is a significant form of Pervasive developmental disorders (PDD) and is also classified as syndromal and non-syndromal. The extent of non-syndromal autism is unclear, but syndromal autism includes an intellectual disability or congenital syndromes. Diagnosed reports suggest some children lose their language and social skills at 15-30 months. Researches have been restricted due to identification problems in traditional boundaries between the subgroups and disciplines like psychiatry, neurology, paediatrics, and psychology.

According to doctors, very few people suffering from autism exhibit savant syndrome. A person starts to exhibit extraordinary skills and abilities in a specific field, like, calculating complicated sums at a very high speed, reading two books simultaneously, memorizing things quickly, etc. The exact causes leading to autism are still not known. It just occurs due to a different functioning of the brain and is often believed to be genetic, as the doctors found pieces of evidence. Autistic people experience changes in the significant areas of the brain that affect their speech and behaviour. In cases of twins, a strong correlation between them has also been observed in terms of autism. Environmental factors also cause autistic disorders. The risk factors during pregnancy, including rubella, toxins, autoimmune diseases, fetal growth restrictions, and air pollution, also play a vital role. 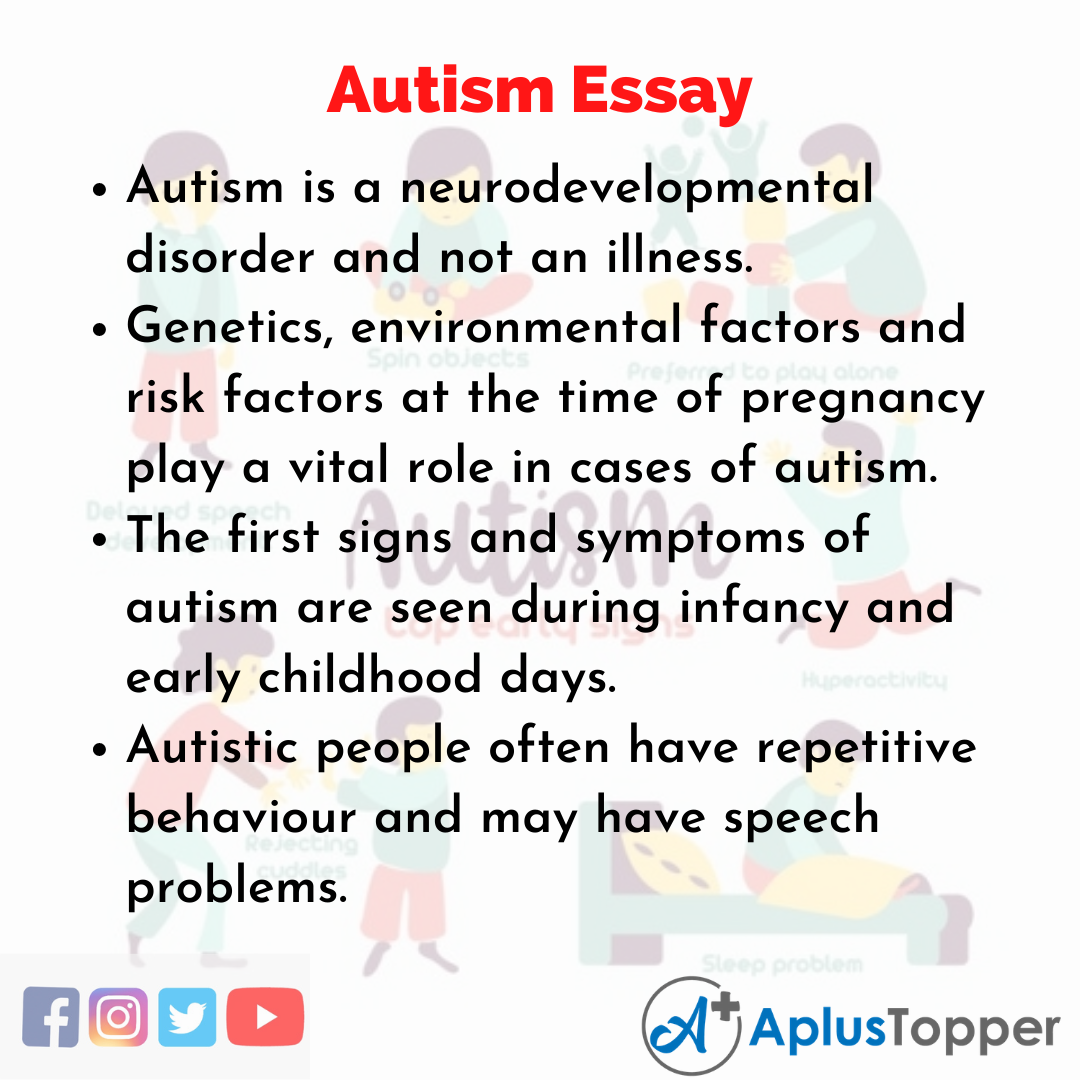 Autism is a neurodevelopmental disability that occurs at the age of three years. It affects the social, behavioural and communicative skills. The characteristics of autism vary from person to person. Parents start to notice the autistics characteristics in their child when he/she avoids social interactions, has behavioural issues and speech problems.

One of the important behavioural characteristics of an autistic child is aggressiveness or self-harming behaviour, either active or passive. They exhibit odd behaviours and have a resistance to change regular routines. However, in many cases, extraordinary talents and skills are observed in autistic people. The symptoms of autism first appear during infancy or early childhood days. Autistic people have specific impairments which include problems in social interactions, communications, repetitive behaviour. Atypical eating habits are also common.

The causes of autism have not been discovered yet, but genetics play an essential role along with significant risk factors during the time of pregnancy. It is a disorder and not a disease and is not curable. Medications, therapies and strategies help to improve the conditions, physically and mentally, and people need to get more aware and careful while dealing with autistic children.

10 Lines on Autism in English 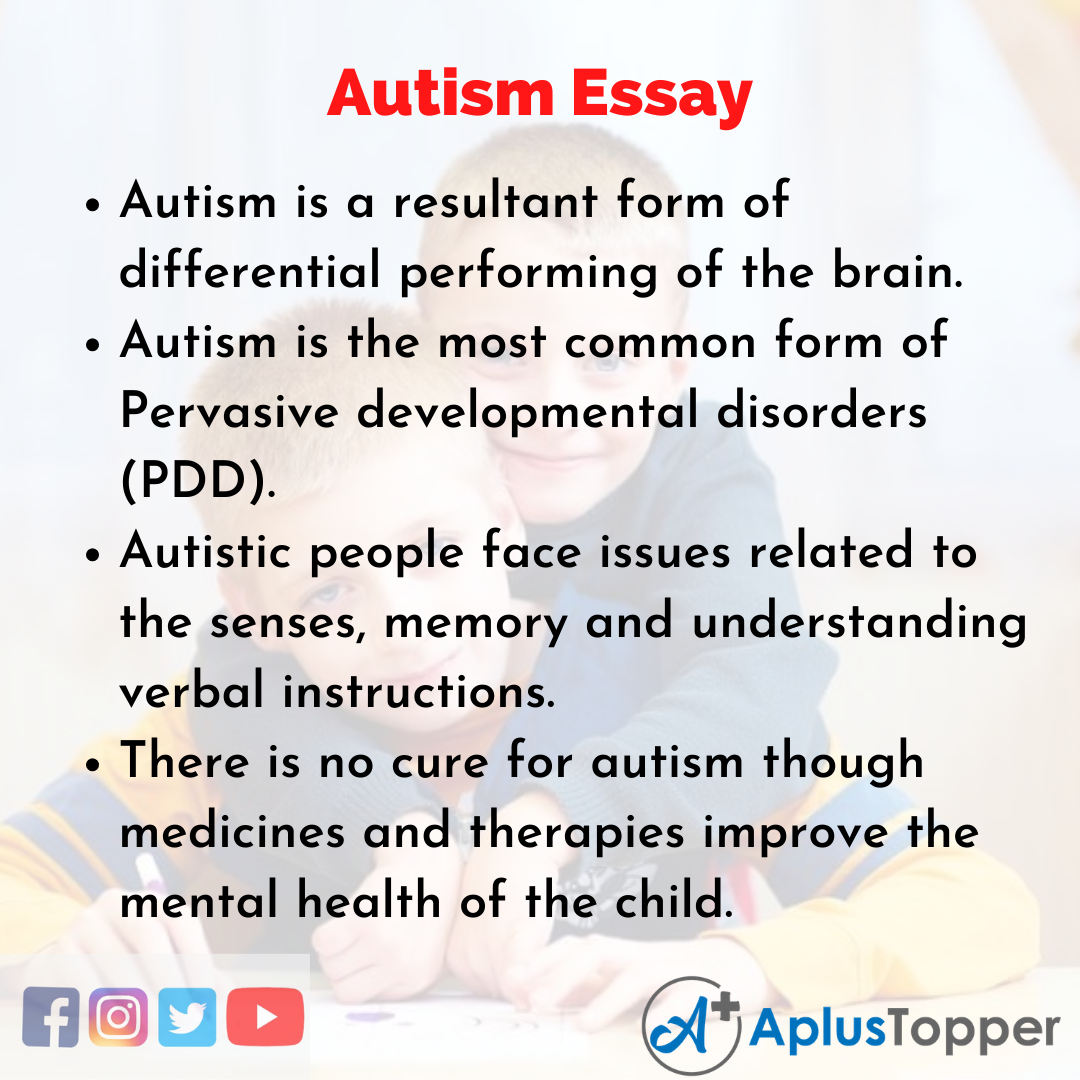 Answer:
There is no exact known cause of autism, but genetics and environmental often affect in cases of autism.

Question 2.
What does ‘spectrum’ mean in autism cases?

Answer:
Autism does not come with a single disorder. It has a range of conditions related to behaviour, speech, communication and memory, and hence it is often called Autism Spectrum Disorder (ASD).

Question 3.
How to understand if a child is autistic?

Answer:
The signs of autism are identified in early childhood when the child isolates themselves or faces speech difficulties or have a tendency of repetitive behaviour or phrases.