Aryabhatta Essay: The moment we hear the word Aryabhatta ‘zero’ is what comes to our mind but a lot of us don’t know that Aryabhatta has discovered and invented a lot many other things other than just inventing zero. Other than being a brilliant mind of the time, Aryabhatta is a true success story of India on how hard work and dedication can make you a great person.

Aryabhatta is a testimony for the intelligence and advanced thinking that Indian society had thousands of years back and in this particular Aryabhatta essay, we are going to discuss what Aryabhatta represents to today’s Indians and what has been his influence over the world in the recent times.

Aryabhatta, the great scientist and mathematician from India was born in a small place in Bihar known as Aryabhatta during the Gupta dynasty. He was one of the greatest minds of the millennium who discovered the basics of mathematics that children are taught today in every school around the world. Aryabhatta was the one who worked out the entire value of Pi and this value is used in various inventions and discoveries by scientists around the world.

Being a devout Hindu, Aryabhatta used many cultures and idiosyncrasies in the Hindu scriptures to discover various theories in mathematics one of which was the calculation of the volume of a sphere and the calculation of the area of a triangle. It is said that he came up with the formula of area of triangle and volume of Sphere through the “home”, a type of Hindu ritual, only that is performed in Hindu culture. Although there is no substantial proof to back this theory, the fact can’t be denied that Aryabhatta was a staunch devotee of Hindu culture and many of his inventions were influenced from the scriptures of Bhagavad Gita.

Aryabhatta is popularly known for inventing the number zero. He also invented the number system as we know today. Aryabhatta is not just a mathematician but a physicist and an astronomer too. Aryabhatta was good with words and had written tree astronomical books but only one of the books known as Aryabhata is known to man today.

He was the first person to establish that Earth and other planets in the solar system have its own axis and they rotate around its axis and revolve around the sun on its own axis. It is said that many of his theories, inventions and discoveries were ridiculed by the people then and were not accepted wholeheartedly in the scientific community back in the time but most of his inventions today are celebrated and his theories have given birth to many more inventions that have made the life simpler on earth.

Add 4 to 100, multiply by 8 and add to 62000. This is the circumference of a circle whose diameter is 20000. This was one of the most popular riddles stated by Aryabhatta that changed the way mathematics, physics and astronomy are studied around the world.

The life of aryabhatta has to be taught to children all around the world because his life is filled with stories of inspirations and struggles. Having been born into a humble family and at a time where scientific discoveries were frowned upon by religious leaders, Aryabhatta overcame all the odds and discovered various things in mathematics, astronomy and physics that the scientists today are thankful for. To stand up against the entire society of blind belief and establish scientific theories thousands of years back was in itself a great accomplishment by Aryabhatta.

I would like to conclude by saying that without the inventions and the brilliance of the first mathematician of India, Aryabhatta, the science as we study today would be very different. It was because of his inventions of a number system, area of triangle or volume of a sphere that many other inventions were given birth to. If science can be traced back, experts suggest that even the technological revolution that is happening today, for example, the writing of binary codes, was all possible because of the invention of the number system and the invention of the number zero by Aryabhatta. The people of India and people of the world owes a great amount of gratitude to this great scientist and mathematician, Aryabhatta 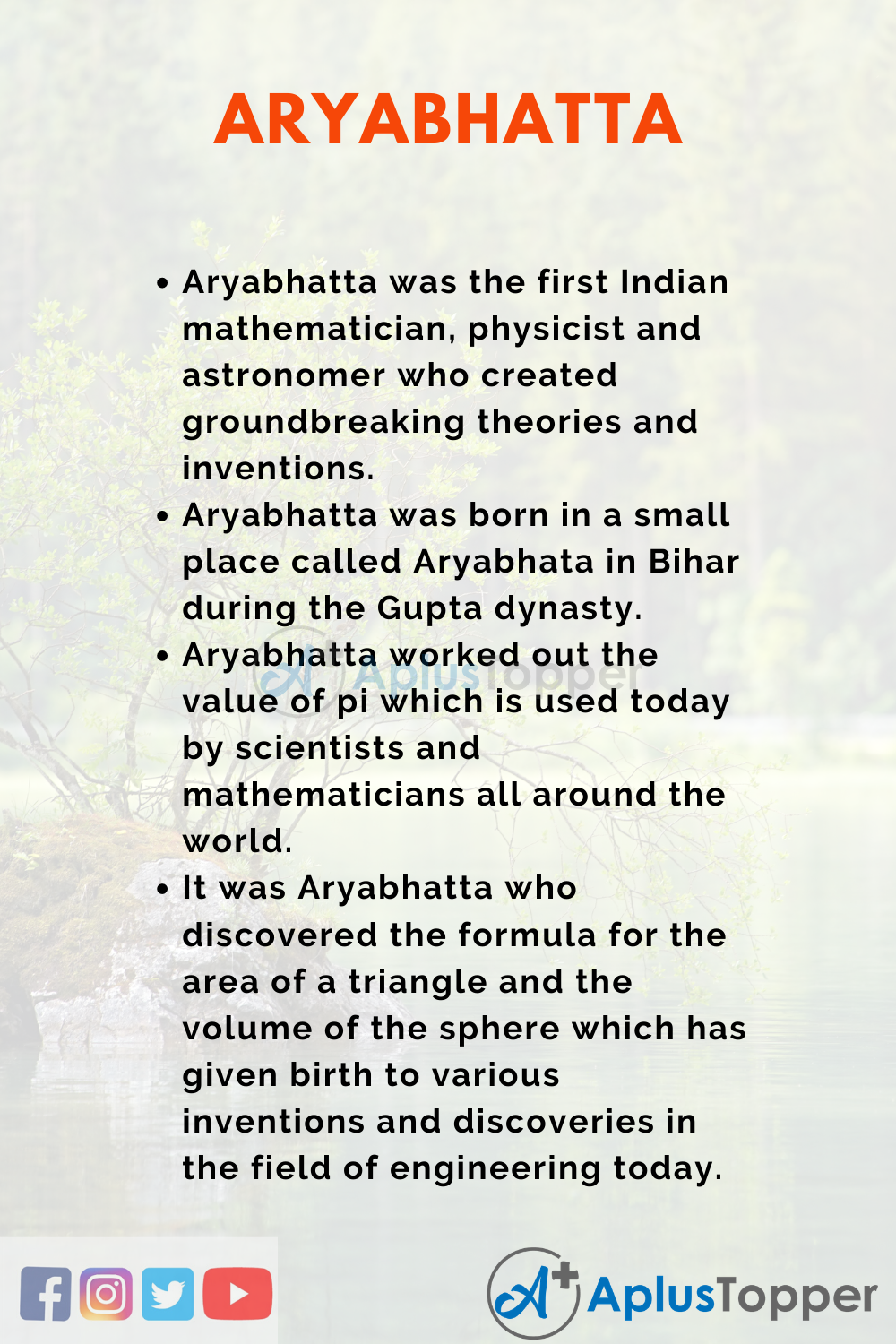 Aryabhatta is a mathematician who had a humble beginning during the Gupta dynasty in a small village in Bihar known as Aryabhata. Breaking all the religious stereotypes and social stigma at that point of time, Aryabhatta rose above all the difficulties and became the first mathematician and scientist of India and gave birth to the theories of modern science and mathematics that we study today.

Aryabhatta was the first mathematician, astronomer and scientist of India who created or discovered the number zero, the place value system, algebraic identities, trigonometrical functions, the value of pi, the shape of the solar system and the whole concept of rotation and revolution of planets. The contribution of Aryabhatta to the field of science and mathematics is immense. Because of his discoveries and inventions, a lot of other discoveries in various other fields from physics to medicine to engineering has been given birth to. The scientific community of today is forever grateful to the inventions of Aryabhatta thousands of years back.

I would like to conclude by saying that the inventions of Aryabhatta stand as a testimony for the intellectual brilliance and advanced thinking of Indian society thousands of years back. Although the credit for many scientific discoveries is taken by people from the west, the inventions and discoveries by Indians and Hindus in the country thousands of years back holds a special place in the world of science and mathematics.

10 Lines on Aryabhatta Essay in English 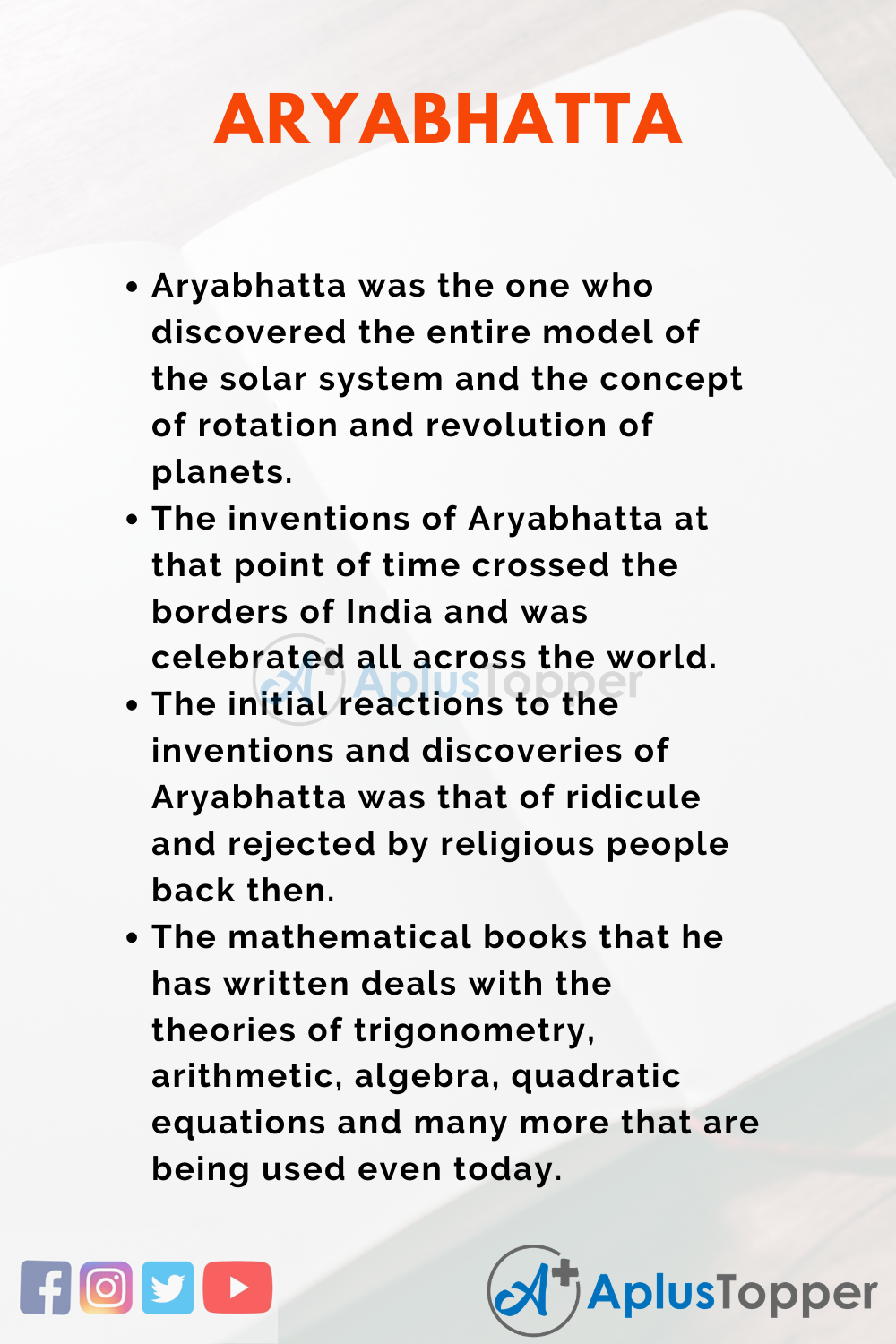 Question 1.
What did Aryabhatta Discover?

Answer:
Aryabhatta discovered the value of pi, the entire concept of rotation and revolution of the earth in the solar system, number system and many more.

Question 2.
Where was Aryabhatta born?

Answer:
Aryabhatta was born in a small village called Aryabhata in the state of Bihar of India.

Question 3.
What is the importance of the discoveries of Aryabhatta in today’s world?

Answer:
The discovery of the number system, the number zero and the structure of the solar system have cascading implications on the science that we study today. The engineering marvels that we see across the whole world today is possible because of the basic theories that was invented by Aryabhatta.

Question 4.
When was Aryabhatta born?

Answer:
It is predicted that Aryabhatta was born during 476 AD.