Article 370 Essay: One of the highly controversial topics in the country from last year was the abrogation of article 370. Given the depth of the impact it will have on the Indian subcontinent as well as on the people of Kashmir, lots of debates have happened over this particular article in the Indian constitution. It has created a political and legal storm in the county.

In this particular article 370 of the Indian constitution essay, we shall be talking about what the article is, a brief history of the law, and what will be the future of Kashmir and India with respect the abrogation of the law. A comprehensive article 370 of the Indian constitution essay can be used by students aspiring for IAS or IPS (UPSC Civil services) examination in the country.

When India obtained its independence from the British rule in the year 1947, many states such as the Deccan, Mysore region and Madras presidency joined the Indian union. Some were forced to join and others were given a choice of sorts. Kashmir, given the population of Muslims in the region, was reluctant to join either of the forces on their sides i.e, India or Pakistan. In the year 1949, October article 370 was added to the Indian constitution on a temporary basis under Maharaja Hari Singh and congress leader Sheikh Abdulla.  And ever since that day, article 370 has been a part of Jammu and Kashmir rule until 2019 when it was abrogated.

What is Article 370 of the Indian Constitution?

All this came to a sudden halt when article 370 was abrogated in 2019. As this article 370 of the Indian constitution essay in being written, a curfew is imposed all over the state of Jammu and Kashmir, for over a year now, to prevent unrest and violence in the state as a result of the abrogation of article 370.

Now that the special powers are taken away from the government of Jammu and Kashmir, two new union territories in India is formed, which are a union territory of Jammu and Kashmir and Union territory of Ladakh, Leh and Kargil. The whole region is under the control of the Indian central government and AFSPA (Armed Forces Special Powers Act), which gives powers to the Indian army to detain anyone suspicious without any kind of accountability and trial, is put in place in certain sensitive regions of the state.

Some say the abrogation was unconstitutional and authoritarian in nature. But the fact of the matter is that abrogation has caused enormous amounts of unrest in the state with curfews being imposed for over a year now and an unspeakable amount of humanitarian crisis looming over the state of Jammu and Kashmir.

Why was article 370 abrogated?

There are plenty of reasons that the central government has given to the people asking the reason for the abrogation of the article. Some of the reasons are:

These were a few of the reasons that the central government gave in defence of the abrogation of article 370.

Irrespective of what the future holds of Kashmiris, they’ve been under humanitarian crisis and turmoil for more than 6 decades now. With or without article 370, an entire generation of Kashmiris has been bearing the brunt of military power, both from the Indian army as well as the Pakistani army.  Kashmir should not be a guinea pig for a bigger diplomatic war between India and Pakistan.

Thousands of people (both civilians and soldiers) have been killed and thousands of crores of money has been spent on military resources in the state. Kashmir is one of the most militarized zones in the country. A proper and long-lasting solution has to be found out for the people of Jammu and Kashmir so that they prosper and grow in the future. 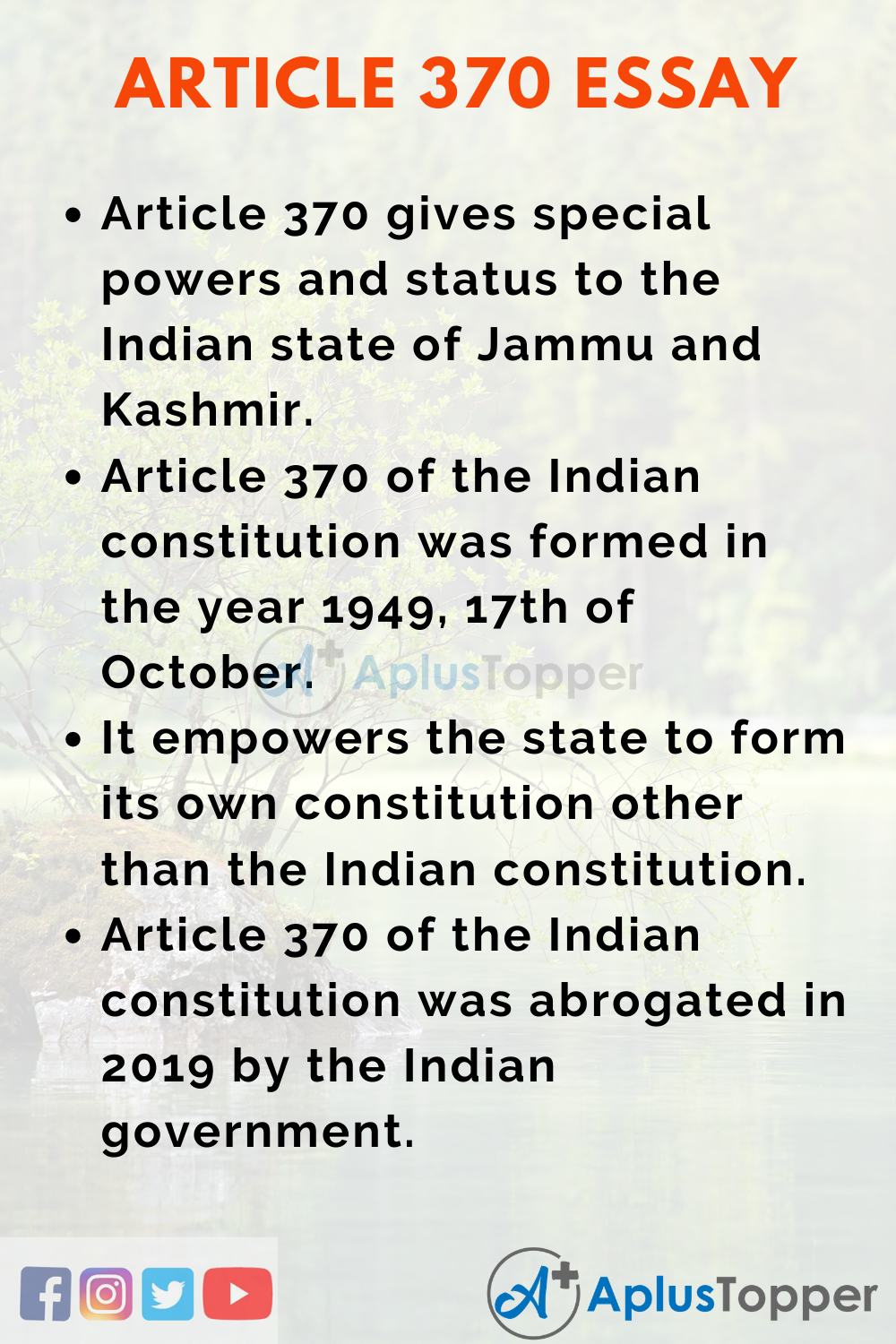 Find below a 200-word essay on  article 370 of the Indian constitution essay for students of classes 1,2,3,4,5 and 6, and also for UPSC civil services aspirants

10 Lines on Article 370 of the Indian Constitution Essay 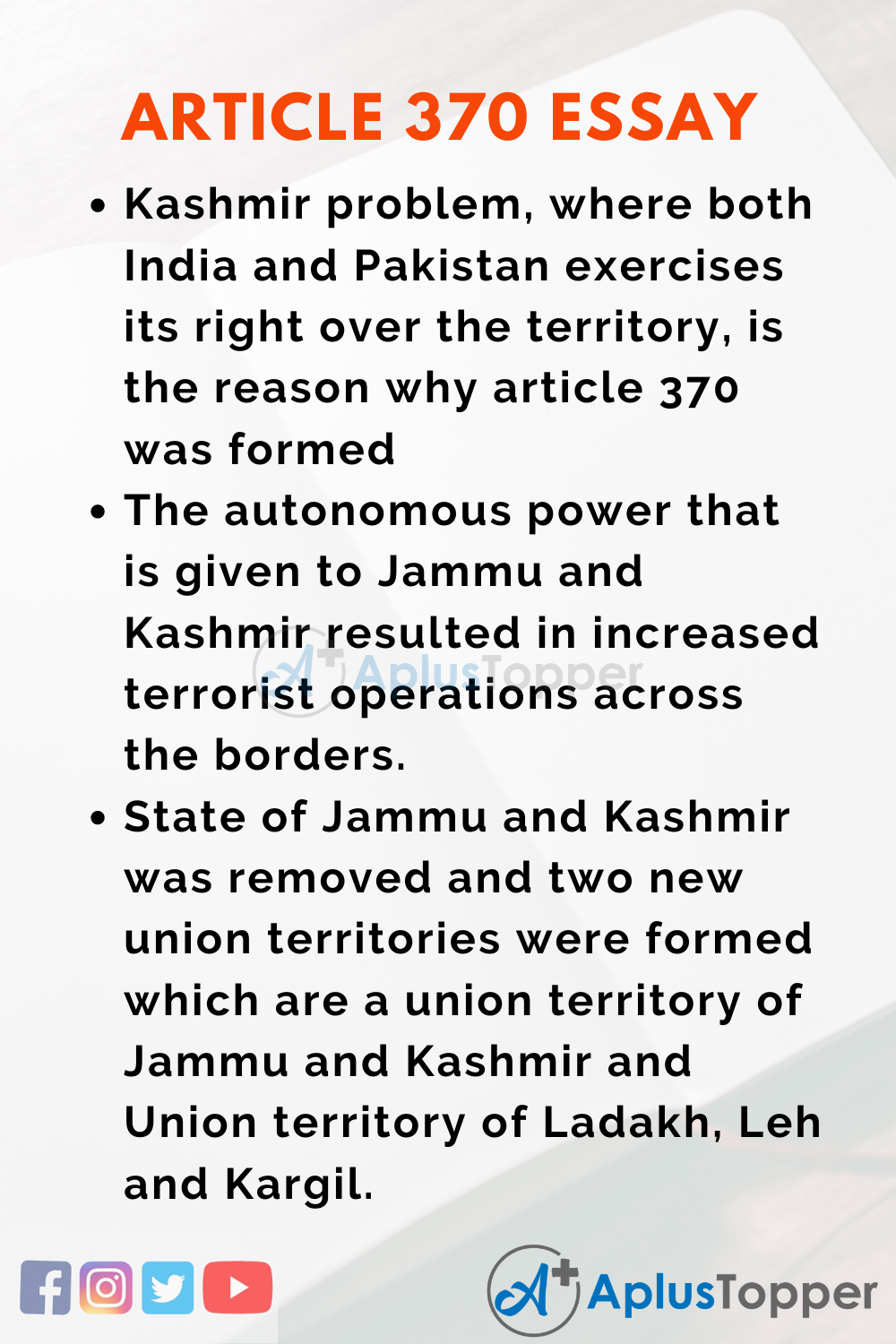 Question 1.
What happens if article 370 is removed?

Answer:
Special powers will be taken away from the government of Jammu and Kashmir and the state will be obligated to abide by all the clauses in the Indian constitution

Question 2.
What are the advantages of removing article 370?

Answer:
Ownership of land, decrease in terror operations and increased control by the Indian government over cross border infiltration are some the advantages of removing article 370

Question 3.
Why does Pakistan want Kashmir?

Answer:
Kashmir is a diplomatically and strategically apt location for both counties to establish their power. Also, Kashmir is rich in natural resources, which is why Pakistan wants Kashmir to be part of their country

Question 4.
Why is Kashmir the most militarized zone in the world?

Answer:
To prevent civil unrest and cross border terrorism, the Indian Army has deployed soldiers in high numbers in sensitive regions of Kashmir