Are we too dependent on Computers Essay: Computers are quite new inventions as they were invented just about fifty years ago. But the widespread use of computers started some thirty years back.

Nowadays people are so much dependent on computers that life deprived of computers is unimaginable. In a short period, computer made a tremendous impact on people’s lives.

We are providing students with essay samples on a long essay of 500 words and a short essay of 150 words on the topic Are We Too Dependent On Computers for reference.

Long Essay on Are we too dependent on Computers is usually given to classes 7, 8, 9, and 10.

A life without computers is something no individual can think about and the fact that they have become so significant because nothing can replace them. Anyone can find computers anywhere these days. Personal computers were introduced and put in use in the year 1980.

From the invention of computers, people worldwide have become hugely dependent on computers. As computers make life easier for any individual, they have found their way into almost every aspect of an individual’s life. Socializing with friends and families who live far away to visit, working from home, and providing ever-welcome stress relieve when coming home from work or school and having some fun, all of this can be done using computers.

The huge question which comes into one’s mind as people increasingly rely on computers to get through the day is: are we becoming way too dependent on computers? Despite the enormous advantages of computers, there are numerous arguments against them too, and one of the major negative effects is that some individual’s belief that its affecting children’s education. Children are unable to identify their mistakes while completing assignments on computers like spelling or grammar. Although most computer programs have the grammar and spell check, they are not dependable; as they can’t differentiate between homonyms and often suggest corrections that are not correct due to which children make mistakes.

Another negative impact of computers is when a person’s interest in computers becomes an obsession. Everyone knows that we can shop online, even study online, keep record and organize information and can entertain ourselves with endless games or music/movies. However, it is still very important to have a life outside of the cyber world as it is not real life. Suppose computers become the central point of an individual’s life. In that case, their behaviour changes, such as they become lazy and develop anti-social.

Individuals who share all their personal information online like names, address are hampering their safety as their information can easily get stolen. As our dependence on computer increases, our comfort level with computer increases too. Most businesses are unable to run without using computers nowadays, and along with the development of a country, computers have become must in an individual’s life. Car rentals, movie rentals, banking, along with credit apps all is now done with computers.

Our world will remain standstill with a screeching halt if we lose the use of computers. The stock market will crash, credit machines and gas pumps will go down too. All of these proves that we are way too dependent on computers which can become an extreme risk to the way all businesses and lives are running.

Although modern societies and developed countries are heavily dependent on computers, the survival of the human race is not dependent on computers. So, there is no possibility to live without computers nowadays, but one should also find ways to make the dependence on technology less harmful for individuals. 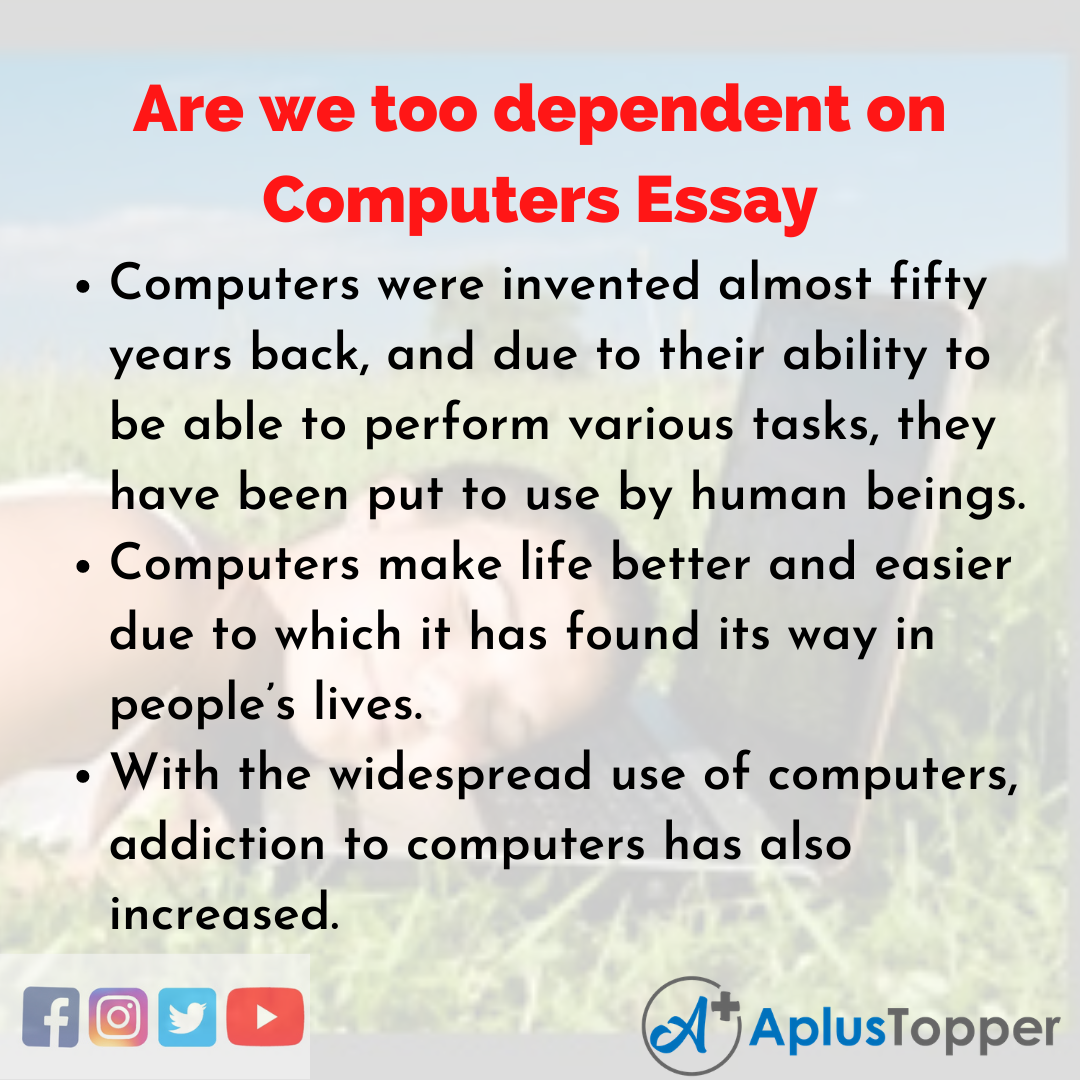 In today’s world, computers are something which almost everyone uses, and it is easily accessible from anywhere. But although there are many positive impacts of computers, they come with many negative impacts too. The creativity level of children is decreasing day by day because everything is available online and with a single touch, students can copy the answers and writings.

Strained eyes, obesity, laziness, along with an obsession with the cyber world is arising with the widespread use of computers. Over-reliance on computers has lead to the smallest thing that can be done without using computers are being computerized.

Hence, computers have become very important in an individual’s life, but humans must reduce over-reliance. Overuse of computers should be reduced as although it does make one’s life easier it has many disadvantages too. At first, people might not realize how dangerous it is for one’s life, but with time, people have to realize and take steps.

10 Lines on Are we too dependent on Computers in English 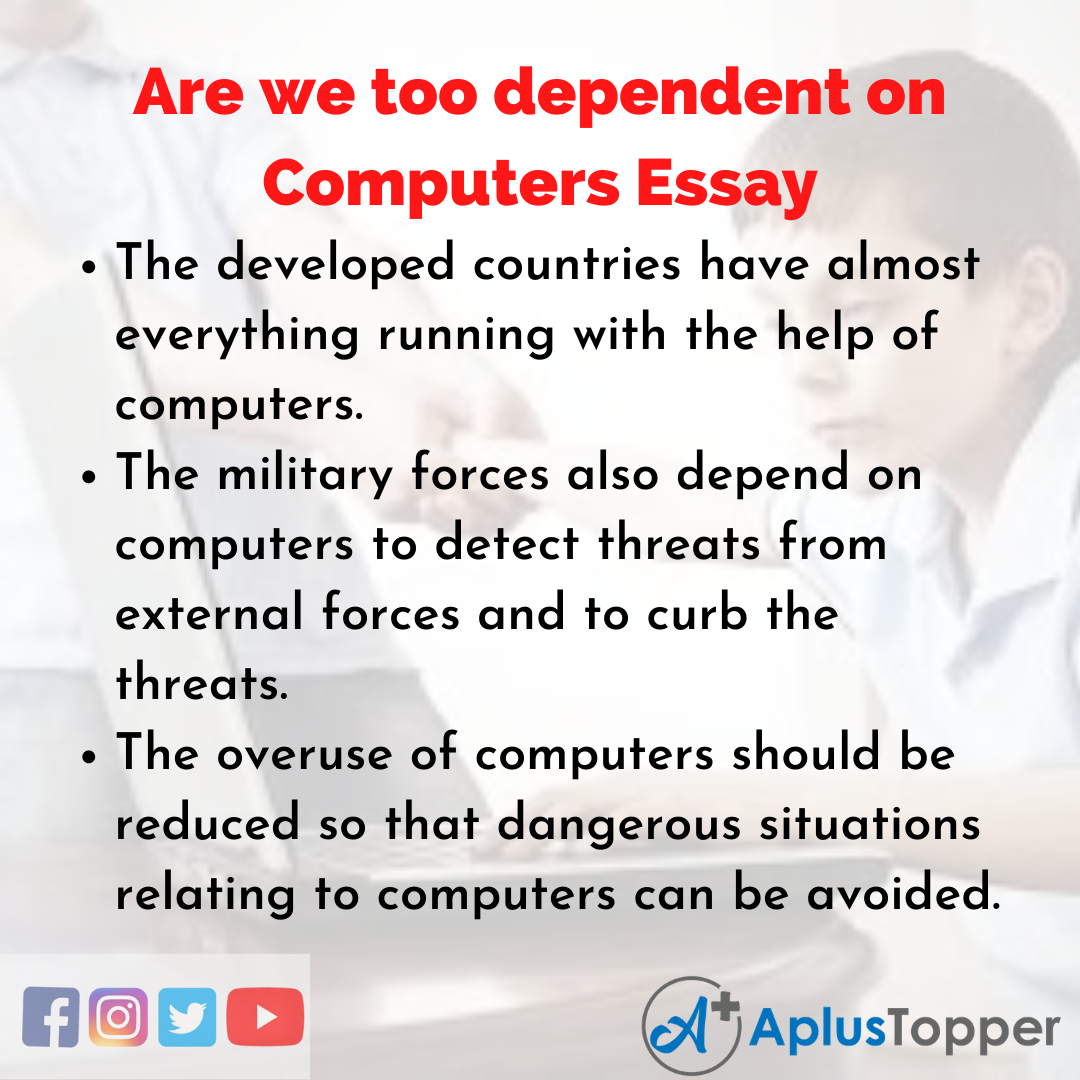 Question 1.
How do computers affect an individual’s mental condition?

Answer:
Due to the overuse of computers, an individual may experience stress, sleep disturbances, mental overload, less social interaction and exposure to bad ergonomics which leads to bad mental health conditions.

Question 2.
Are computers harmful to the environment?

Answer:
Computers are harmful to the environment because they contain heavy metals that contaminate groundwater and pollute the soil when dumped into landfills.

Answer:
Overuse of computers can cause arm, shoulder, hand or wrist strains and eye strains, and many other physical and psychological health problems.