Appointment Letter Meaning: The appointment letter is the first piece of document handed to the candidate who has gone through the interview and has been selected for the position. This is a confirmation that the person has been appointed for a particular job. This letter is a formal letter issued by the organisation where the candidate has been employed. It is an intimation letter given to the selected employee for a particular designation like a software professional, an auditor, a teacher, an accountant, a designer, etc., or for an internship.

The basic private company appointment letter format doc will consist of Name, date of commencement, date of joining, job location, designation name, roles and responsibility, CTC, working hours, condition for termination, amendment and enforcement, leave policy, notice period clause etc. The letter should comprehensively mention all the terms and conditions. Usually, the private company has such an appointment letter format. Even the government companies will provide the appointment letter sample for employee to the rightful candidate by sending them the post or directly through their website. Recently, the food corporation of India (FCI) has released the Appointment Letter for Selected Candidates 2021.

A sample letter requesting an appointment for a business meeting is also provided here, which can be mailed to the concerned person. These request letters can be sent by the employee asking for a meeting appointment with the boss or director of the company or to a client for a discussion over the business.

Every time a company has processed recruitment to hire job seekers who are willingly looking to get employed, they need to apply for such jobs by sending the application letter. The selected candidates will be sent the call letter through drafts or mails to the candidate’s address and called for the interview. After the selection of the right candidate for the job, they will be provided with an appointment letter as a confirmation of their appointment to the job. Here is the format of appointment letter template in the word. 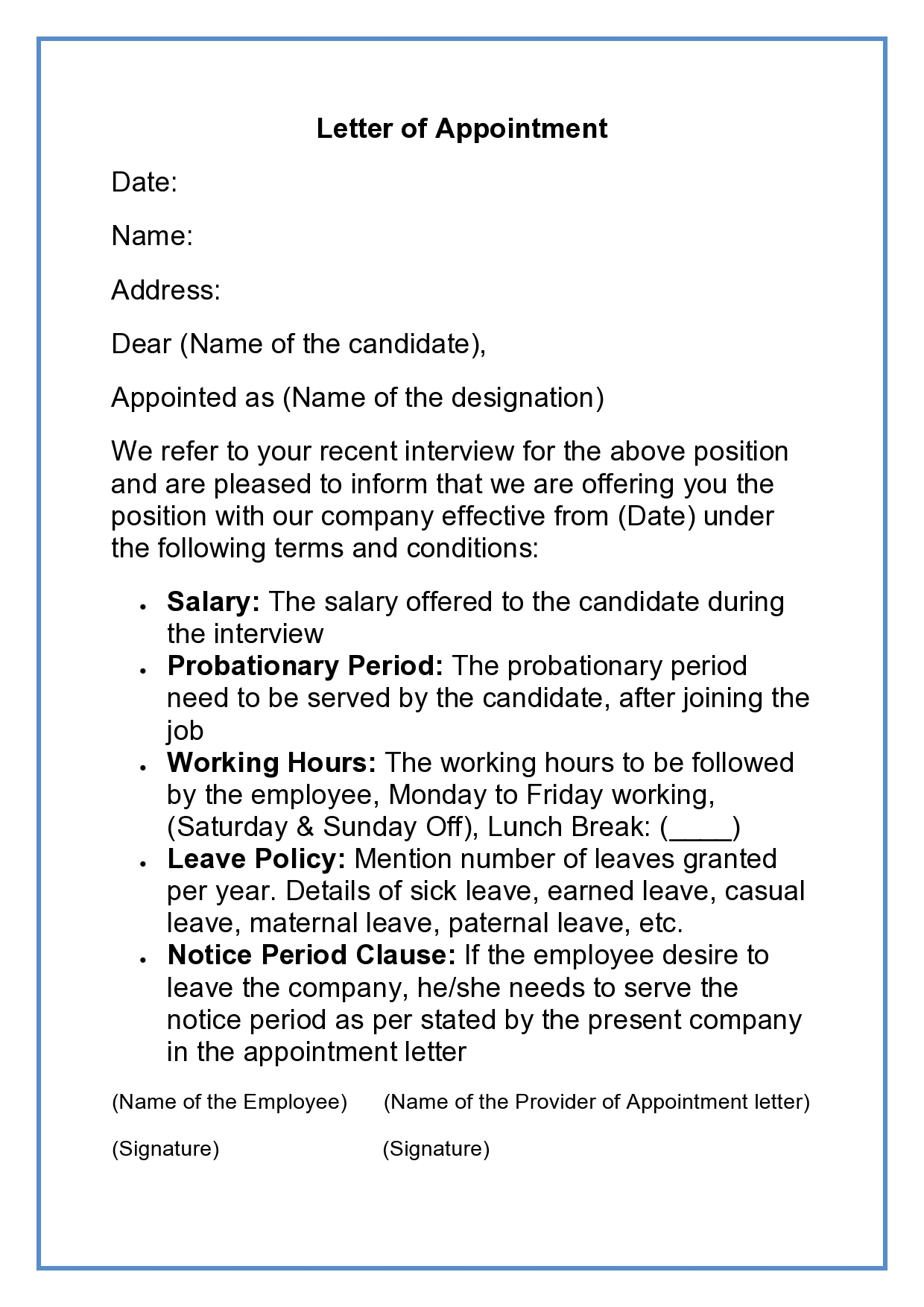 Appointment Letter Sample: Here are a few sample of appointment letters to be provided to the employee, after he has cleared the interview and selected for the designated profile, whether they have been appointed as a software professional, a teacher, an accountant, etc.

Sometimes the companies also offer internships to the freshers or students who are already seeking their graduation to give them the knowledge of the work atmosphere in the organisations. These internships will be of short duration, such as sometimes it is 3 months, sometimes of 6 months, depending on the company’s requirement. Interns tend to learn a lot through these internships. The letter to appoint an employee for a particular designation or job is called a job appointment letter. Below is the sample letter for a software professional job. 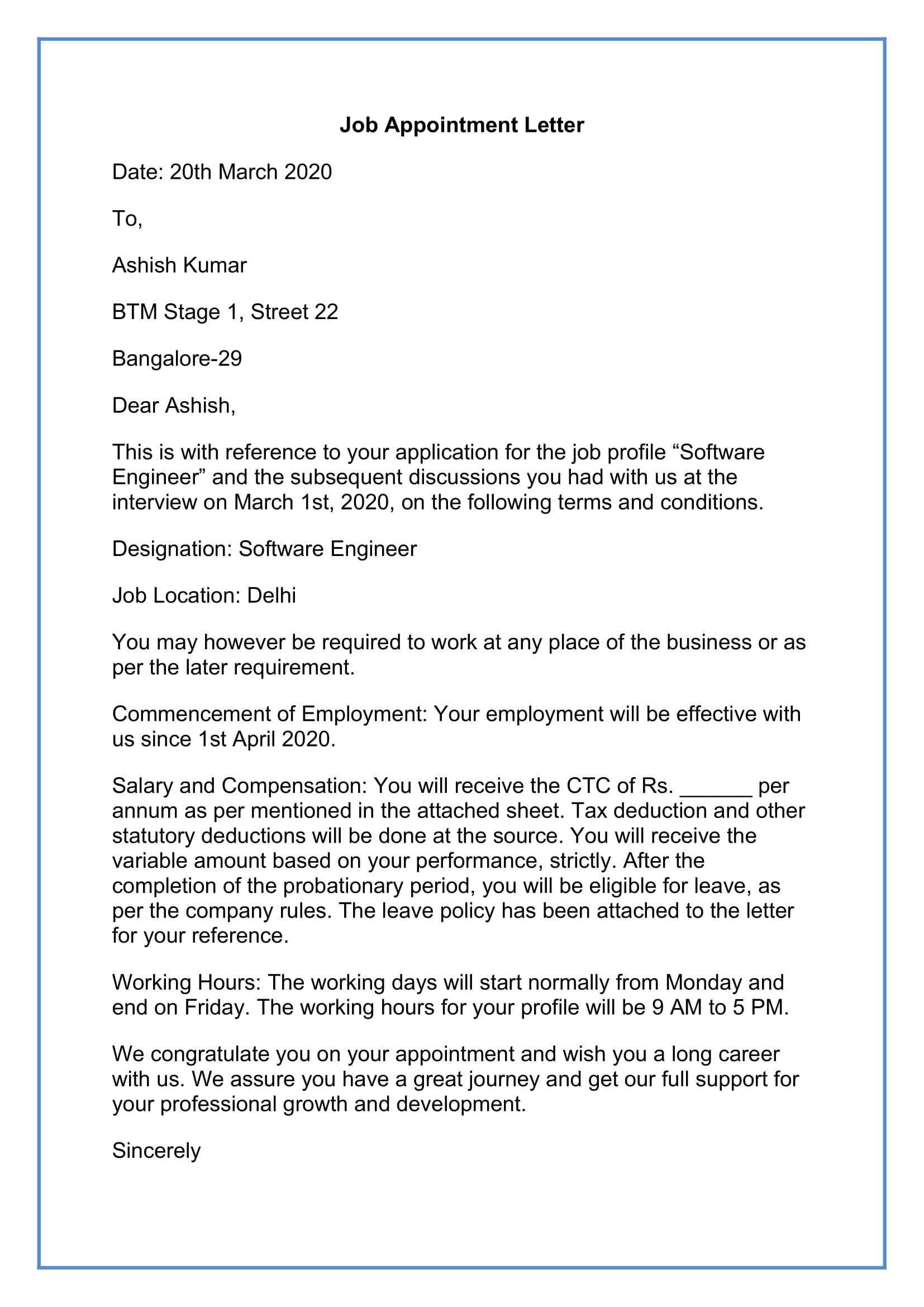 How do I Write an Appointment Letter? 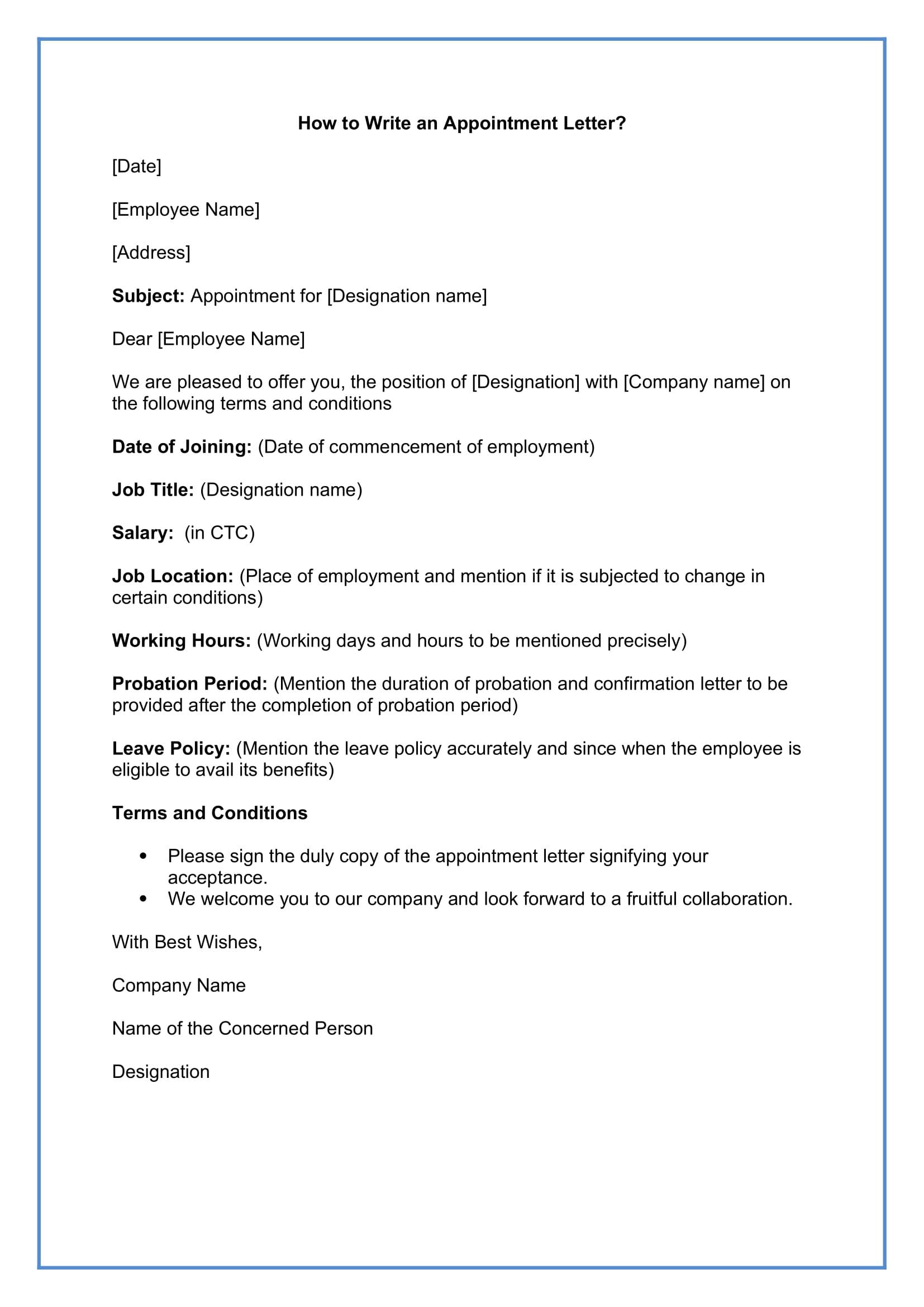 When a company is hiring an employee for a certain designation, they may send a number of correspondence before the position is actually filled. The two most important documents or letters provided by the company after the recruitment process is over are offer letter and appointment letter.

An appointment letter format India for the position of Accountant should consist of the date of joining, job location, salary and benefits, working hours specifically on it. A sample letter is provided below for reference. 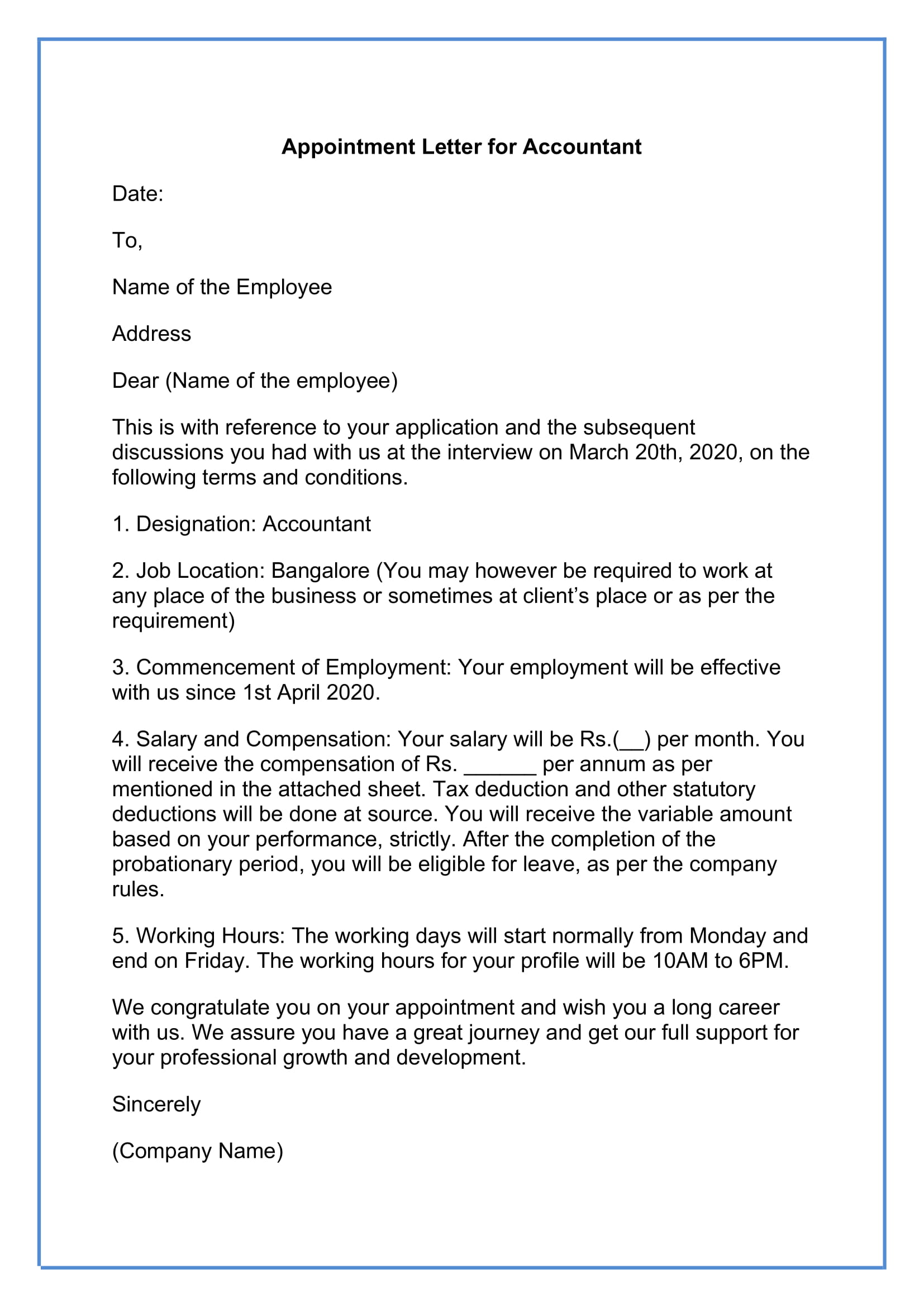 FAQ’s On Letter of Appointment

Question 1.
What is an Appointment Letter?

Answer:
An appointment letter is a confirmation letter sent by the company to the selected candidate, stating that he/she has been appointed for a particular position. This letter will usually consist of designation name, Date of joining, Job location, Salary at which both the parties have agreed, benefits, working hours, working days, and company’s terms and conditions.

Question 2.
What is the setup of the appointment letter?

Question 3.
What should be included in an appointment letter?