Apoptosis Essay: It can be defined as a form of programmed cell death that occurs in multicellular organisms. Biochemical events lead to characteristic cell changes (morphology) and death. These changes include blebbing, chromatin condensation, nuclear fragmentation, cell shrinkage, chromosomal DNA fragmentation, and global mRNA decay. Due to apoptosis, an average adult human loses between 50 and 70 billion cells each day. Approximately 20–30 billion cells die per day for an average human child between the ages of 8 and 14.

Defective apoptotic processes have been implicated in a wide variety of diseases, so its importance as a biological phenomenon. Excessive apoptosis causes atrophy, whereas an insufficient amount of results in uncontrolled cell proliferation, such as cancer.

We are providing students with essay samples on a long essay of 500 words and a short essay of 150 words on the topic Apoptosis for reference.

Apoptosis is a form of programmed cell death, or “cellular suicide.” The cell’s contents are packaged into small packets of membrane for “garbage collection” by immune cells in an orderly process. It is different from necrosis, in which cells die due to injury.

Apoptosis maintains balance in the body by removing cells during development, eliminating potentially cancerous and virus-infected cells. Apoptosis involves the death of a cell, but it benefits the organism as a whole (for instance, by letting fingers develop or eliminating potential cancer cells).

Cells that undergo apoptosis shrink and develop bubble-like protrusions which are called “blebs” on their surface and goes through a different orderly process. The DNA in the nucleus gets chopped up into small pieces as the endoplasmic reticulum, break down into fragments. In the end, the entire cell splits up into small chunks, each neatly enclosed in a package of the membrane.

The fragments of the dying cell display a lipid molecule called phosphatidylserine on their surface. Phosphatidylserine lets the phagocytes bind and “eat” the cell fragments. Many cells in the human body have the built-in ability to undergo apoptosis. Apoptosis is a general and convenient way to remove cells that should no longer be part of the organism.

The cell to carve an intricate structure like a hand out of a larger block of tissue, for instance, some cells need to be “deleted” during development. Cells with viral infections or DNA damage behaves abnormal and could hurt the rest of the organism if they survive. To make way for new cells in an adult organism, the other abnormal cells may be eliminated to maintain balance.

Apoptosis also plays a key role in human development. For instance, as we saw in the introduction, your hand started as a paddle-like block of tissue when you were an embryo. Apoptosis of the cells in between the developing fingers “carved” the block.

In all sorts of vertebrate species that have finger- or toe-like digits, and less the process apoptosis occurs and results in more webbing between the digits. Sometimes, if the process of apoptosis remains incomplete due to small mistake that happened during finger or toe development can lead to fused toes.

In some cases like DNA damage, pre-cancerous cells, and cells infected by viruses, a cell can pose a threat to the rest of the body if it survives. If the cells become a threat to the rest of the organism (such as cancer or spread of a viral infection), then it tries to repair but if the damage is beyond repair, the cell removed through apoptosis. When cells have DNA damage but fail to undergo apoptosis, they may be on the road to cancer.

The immune cells that when recognizes the pathogen it divides extensively, undergoing a huge increase in numbers to destroy the pathogen. Apoptosis maintains the balance of cells in the human body and is particularly important in the immune system. 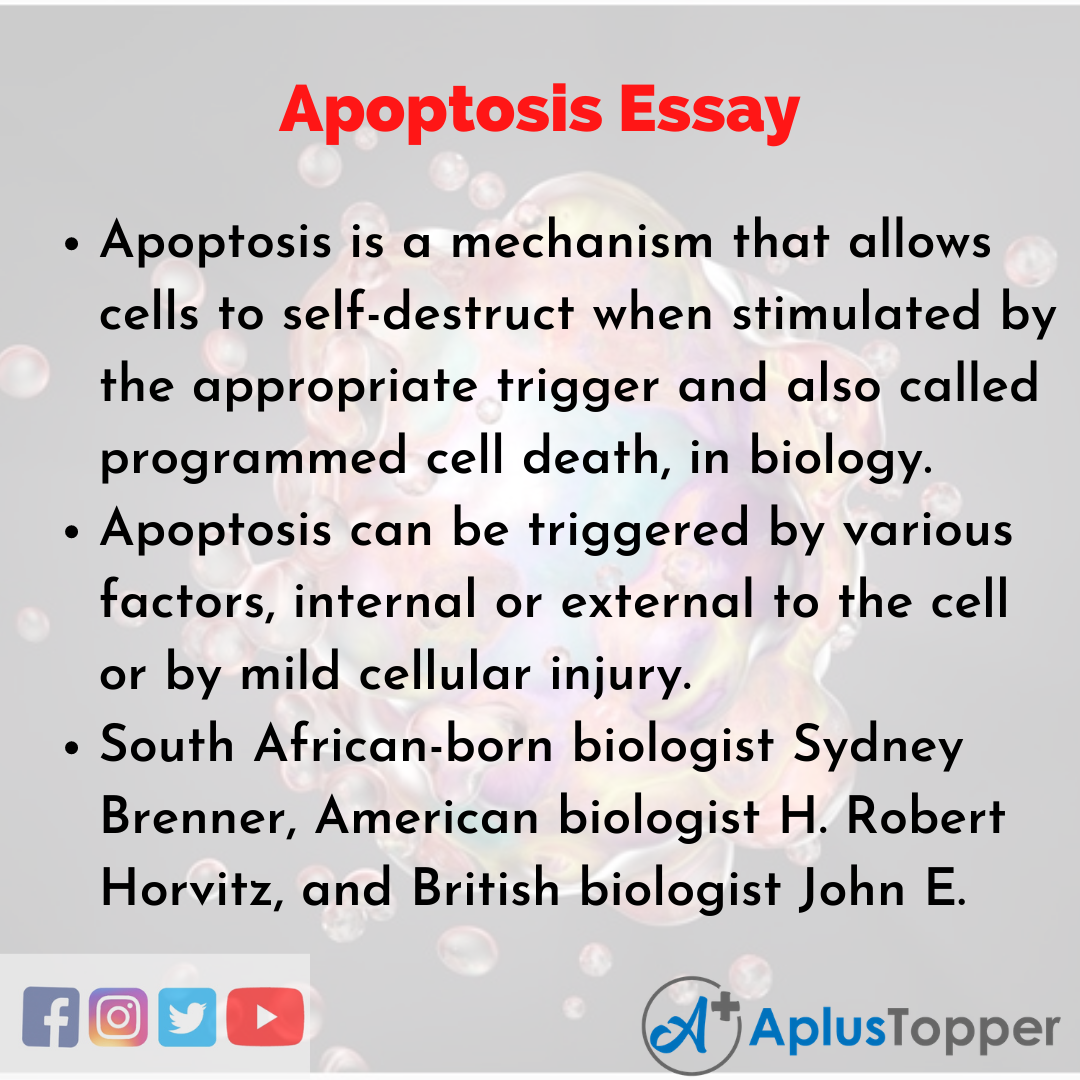 Apoptosis is a form of programmed cell death, or “cellular suicide.” It is different from necrosis, in which cells die due to injury. It contrasts with necrosis (death by injury), in which the dying cell’s contents spill out and cause inflammation.

Apoptosis is an orderly process in which the cell’s contents break down and are packaged into small packets of membrane for “garbage collection” by immune cells.

The damaged DNA, pre-cancerous cells, and cells infected by viruses become a threat to the rest of the organism such as cancer or the spread of a viral infection. It tries to repair, but if the damage is beyond repair, the cell removed through apoptosis.

Apoptosis removes cells during development by eliminating pre-cancerous cell, although the cells that manage to escape the process of apoptosis continue dividing. Apoptosis maintains the balance of cells in the human body and is particularly important in the immune system.

10 Lines on Apoptosis Essay in English

1. Apoptosis is a mechanism that allows cells to self-destruct when stimulated by the appropriate trigger and also called programmed cell death, in biology.
2. Apoptosis can be triggered by various factors, internal or external to the cell or by mild cellular injury.
3. South African-born biologist Sydney Brenner, American biologist H. Robert Horvitz, and British biologist John E. 4. Sulston shared the Nobel Prize in Physiology or Medicine in 2002 for the work of confirmation of each cell in the nematode Caenorhabditis elegans.
5. Necrosis another major process of cell death but has a morphologically distinct form of programmed cell death, is different from the apoptosis.
6. Apoptosis involves condensation of the nucleus and cytoplasm, followed by cellular partitioning into well-defined fragments for disposal. The cell number normally results from the rate of cell production minus the rate of apoptosis in multicellular organisms.
7. In adult animals, apoptosis is used to remove cells like cancer cells or cells that are infected with bacteria or a virus that have become a threat to survival.
8. Apoptosis can also be triggered in otherwise normal cells by external stimuli, including nutrient removal, toxins, hormones, heat, and radiation.
9. Cancer requires the suppression of apoptosis to allow survival of the abnormal tumour cells, which can contribute dramatically to cancer eradication.
10. Apoptosis has the potential to dramatically limit the damage resulting from episodes of ischemia in cardiac and neural tissue. It can improve therapy for diseases from diabetes mellitus to HIV/AIDS. Answer:
Apoptosis is mediated by proteolytic enzymes called caspases, which trigger cell death by cleaving specific proteins in the cytoplasm and nucleus.

Question 2.
What is one example of apoptosis?

Answer:
The resorption of the tadpole tail at the time of its metamorphosis into a frog.

Question 3.
What happens after apoptosis?

Question 4.
How do you detect apoptosis?

Answer:
Apoptosis can be detected by the process of annexin V staining, the TUNEL assay, caspase detection and measurement of mitochondrial membrane potential.