Annual Day Function Essay: The school annual day is perhaps the function that we most eagerly await each year. This year too we had begun to prepare well in advance. The teachers helped us to select the items to be put up and the practice began in the right earnest. As the final day approached, the excitement increased and preparations took on a hectic pace. On the day before the function, a full dress rehearsal was held and everything went off very smoothly.

On the final day we all began to dress up as soon as we reached school at 8 a.m. The function was to start sharp at 10 a.m. The school entrance had been beautifully decorated with flowers and a gleaming banner. A flower-bedecked path lead up to the assembly hall where the function was to be held. As the parents took their seats, the teachers went about making last-minute checks and adjustments. Besides, some short plays, the students had prepared a variety of songs and dances.

The first item was put up by the junior-most class. Dressed as flowers and butterflies they showcased the advantage of nature’s beauty. As the butterflies flitted around the stage two children got their wings entangled. In trying to separate, one of the wings came away. Much to the amusement of all the two children started blaming each other, blissfully unaware of the audience. Everyone was in splits of laughter till some teachers came and rescued the act.

Next came the group songs and folk dances. Dressed in colorful skirts, the whirling dancers were a sight to watch. The class V students had prepared a Hindi play from Panchatantra. Everything went smoothly till the angry tiger tripped and fell while chasing the fox. Instead of roaring with anger, the student playing the tiger began crying aloud.

Fortunately, he was not hurt and began laughing when the fox dropped his mustache. This child, being smart, picked it up and put it in his pocket. The audience roared with laughter, but everyone loved the children. The last act was the play about a man who had lost his memory. The senior students turned out be excellent actors and their efforts were met with well-deserved applause. As the curtains came down, everyone was requested to go to the grounds for refreshments. 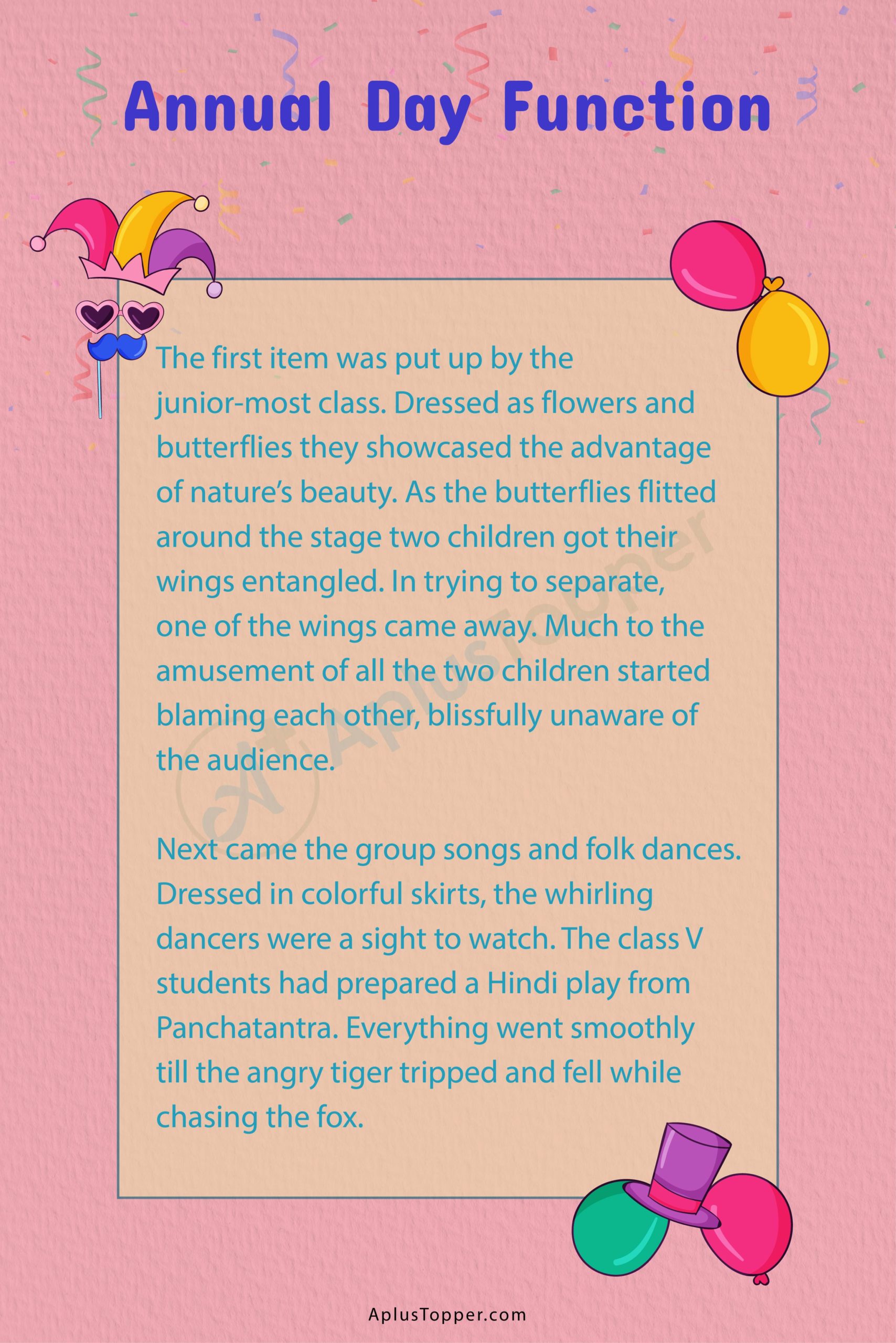 Students had put up food stalls and games. The handicrafts made by students were also put up for sale. There were beautifully embroidered handkerchiefs, colorfully painted boxes and sheets of hand-made paper for sale.

The atmosphere was relaxed and carefree as parents talked to teachers and also other parents. I went around visiting all the game stalls and won a prize for ‘looping the joker’s nose’. There were lots of tasty snacks for sale and for once my mother gave me and my sister full freedom with chaat and ice creams. As dusk began to descend, people started to leave. The annual function ended with a vote of thanks speech by our principal, wherein he also announced the next day as the holiday.