Names of Animals Whose Name Starts With V

List of Animal Names With Letter V At The Start

The Vagrant Shrew is a medium-sized Shrew with vast distribution in western Canada and the United States. One can find them in various habitats, from woods to grasslands, but they prefer drier scrub-like places.

Vampire Bats are the only creatures that only feed on the blood of other species. They exclusively provide at night, using heat sensors to locate the ideal feeding location. Because they solely eat blood, their teeth are only employed to pierce flesh.

They are fascinating since they are the only surviving members of the Vampyromorphida group and have characteristics of both Octopuses and Squids.

Because it is one of Canada’s animal conservation mascots, the Vancouver Island Marmot is Canada’s panda. The marmots are unique to Vancouver Island, and they are one of five animal species indigenous to Canada. According to surveyors, the Vanikoro flying fox is a little flying fox with giant heads and small ears that is roughly half the size of a Pacific flying fox. The pelage is dark brown, and the skin is dark brown-black.

Vaquitas are the world’s smallest porpoise, measuring up to five feet long and weighing up to 120 pounds. The vaquita’s distinctive facial characteristics, including a black ring around each eye and black curving lips, have been compared to those of a smiling panda.

Variegated squirrels are found in North and Central America, ranging from southern Chiapas, Mexico, to Central Panama. It is common in open forests, scrubland, and plantations.

The Arabian veiled chameleon, Chamaeleo calyptratus, is insectivorous but feeds on leaves when other water sources are unavailable. It can survive on a diet of crickets. They can consume up to 15–50 giant crickets per day. 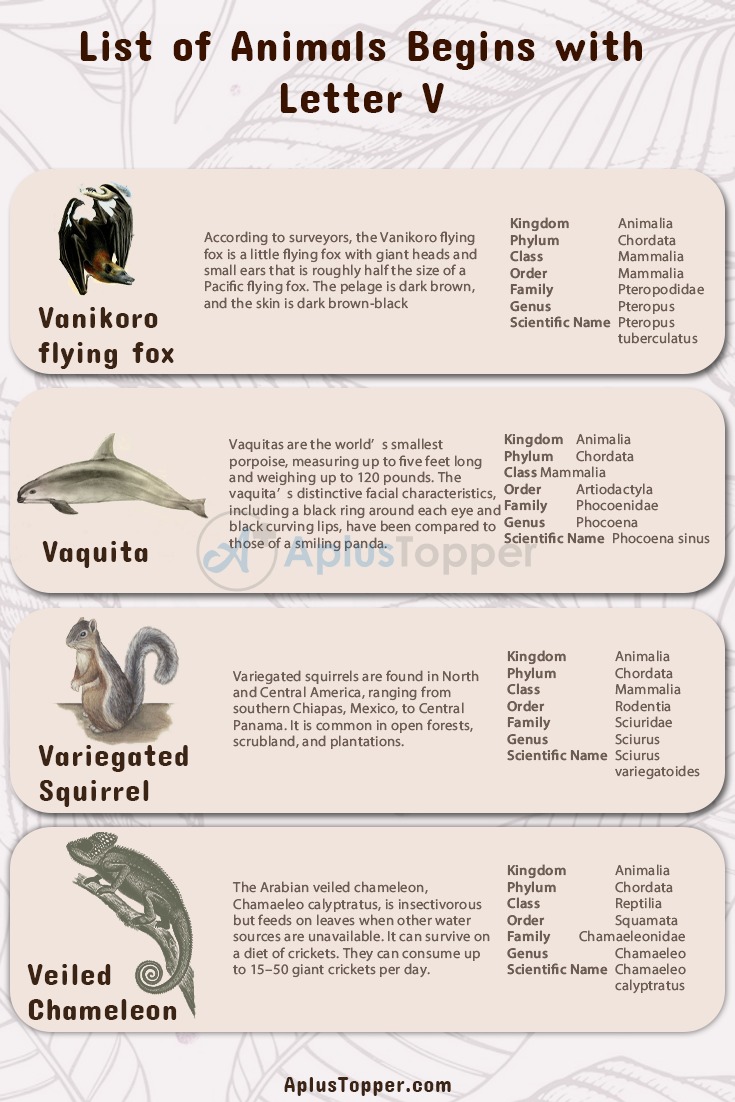 Madagascar is the sole destination where you can find them. It is a rotund, nearly tailless bird with short wings and brightly coloured head decorations contrasting with dark plumage. This species exhibits significant sexual dimorphism, with the female being noticeably duller than the male.

The Verreaux’s sifaka is an easily identified lemur with long, thick, fluffy, white fur that contrasts with a dark brown head crown that descends the back of the neck.

Vervet monkeys are distinguished by their distinctive greenish olive or silvery grey bodies. Their faces, tail tips, ears, hands, and feet are all black. Their brows are also adorned with a white ring that mixes in with their short beards.

Collared Lemmings are solitary animals that maintain their foraging territory and burrow systems. Collared Lemmings spend the winter searching for plant material that has been buried by snow.

The Vicuna is a type of Camelid that is found in the wild. They generate lovely wool. The wool can also be costly because one can only take the animals’ wool every three years. This animal is Peru’s national symbol.

Vinogradov’s jird is a rodent species of the Muridae family. Armenia, Azerbaijan, Iran, Syria, and Turkey are among the countries that have it.

Vipers are a huge snake family with the scientific name Viperidae. Except for Antarctica, Australia, New Zealand, Madagascar, north of the Arctic Circle, and island clusters such as Hawaii, they can be found everywhere over the world.

Viperfish are distinguished by their long, needle-like teeth and movable lower jaws. Viperfish prefer shallower depths during the day and deeper depths at night, mainly in tropical and temperate seas.

The vireos are a type of migratory warbler found in the Americas. They are tree canopy birds with somewhat plain plumage, a muscular physique, and large bills. Although they mostly eat insects, they will eat fruit if it is available.

The Virgin Islands dwarf gecko is one of the world’s tiniest reptiles. It is thought that if the tail becomes detached when fleeing a predator, it can regenerate.

Rusa alfredi is one of the world’s rarest, least-known, and most narrowly distributed deer species. Their upper body is covered in a silky, dense, and soft dark-brown coat. They have spots on their backs and flanks that they keep their entire lives.

The voalavoanala is a rodent species in the Nesomyidae family. Gymnuromys is the only species in the genus. One can only find it in Madagascar. It lives in tropical dry forests in its natural habitat.

They got their name because they only live on the high slopes of four volcanoes in central Mexico. Scientists believe the tiny rabbits, which have very short legs and feet and short ears, are among the most basic of all surviving rabbits and hares.

Voles are tiny, stocky rodents that look like field mice. A vole may appear to be a mouse at first glance. Voles have small rounded ears frequently concealed by their fur, small eyes, and short tails. Their hair is thick and light brown to grey.

Vultures are big birds that do not hunt. Instead, they feed on the carcasses of dead animals, which is known as carrion. Vultures soar over the sky on their enormous wings, looking for prey. They survey a large region of ground with their fantastic vision.