Animals that Start with L in English: The world is full of god’s unique creation. A diverse range of animals reside on the planet earth, and they are classified under various categories to differentiate between them. It is not humanely feasible to remember all these species, families, genus or varieties of animals living on earth. Hence, we have sought to prepare a list of animals whose name begins with Letter ‘L’ for this specific article for the convenience of people worldwide. In this article, you can find Sea, Farm, and Australian Animals that start with L.

Name of Animals Whose Name Starts With L

They are ground-nesting bird species similar to dotterels and plovers. They go from 10 to 16 inches in length and have a unique wailing cry. They are found in many regions of Europe, and they have slow and irregular wing movements.

They are a species of jawless fish. They are also known commonly as lamprey eels. They are funnel-shaped and have a toothed sucking mouth that is natively known as ‘stone licker’. They bore their teeth into the prey and suck blood to maintain their food source, and are found in freshwater regions around the world.

They are a vulture species of Western Asia. They fall under the birds of prey category and are called ‘Huma bird’. They are listed under the threatened species category and have a feather coat that appears like a beard. They are about 94 to 125 cm long and weigh about 7.8 kg.

They are a species of thickly furred mammals. They are found in places worldwide and are famous for tender meat and their fur cover, which is utilized to obtain cotton and make fabric. A large group of lamb or sheep is called a flock, and they weigh up to 160 kg.

Ladybugs are an insect species that resemble tiny beetles with a red exterior with black spots. Ladybugs live on trees and survive on eating leaves and other small insects. They are of various colours due to the different species and may vary minutely in size.

They are winged insects similar looking to dragonflies. They are called net-winged insects or lacewing. They have mouths for chewing food and wings that help them fly. They have lateral compound eyes, a generalized four-wing pattern and a sensory organ.

They are a dog species of Labrador. They are trained to help blindness and autism for therapy purposes and are also domesticated. They are sporty and playful, with a short and dense coat of fur (varying in colour from yellowish to chocolate or black). They have solid and powerful muzzle and muscular bodies that weigh around 25 to 36 kg. They are mixed breed dogs. They are a cross between Labrador and poodle. They are healthy domestic dogs with a low-shedding fur coat of chocolate brown to dark brown and mildly curly fur.

They are a tortoise species found in regions of Sudan, the South Cape region of the African continent. They have a hard calcareous shell that contains a design similar to leopards. They are herbivores and consume grass and lay eggs in their nests during mating seasons.

They are a seal species found in the Antarctic region. They are considered the second largest seal species and are only threatened by the killer whale species. Their diet comprises fish and other small marine animals. They have an average length of about 2.4 to 3.5 m and a weight of 200 to 600 kg.

They are a wild cat species of Eastern and Southern Asia. They are smaller than average wild cat species and have a coat similar to leopard prints. They are carnivores and are threatened by loss of habitat and deforestation. They reach a length of 66 cm and a weight of 3.8 kg.

They are a member of the cat family. They are primarily distinguishable from other species due to their uniquely designed fur coat that consists of a yellowish to chestnut base tone and black markings on top. They are known as black panthers and are an excellent example of carnivores of the Felidae family. Their length is about 60 to 200 cm, and their weight reaches 30 to 90 kg.

Lemurs are mammals of the primates order and are native to the regions of Madagascar. They have large eyes, a pointy snout and long tails, who reside on trees. Their average weight goes up to 9 g.

They are a rodent species of Antarctica. They are tiny rats similar to muskrats, who are mentioned in the story of the pied piper. They measure about 13 to 18 cm and weigh 23 to 35 g. They are herbivores.

They are a predatory blood-sucking worm species of the Annelida phylum. They have a soft, segmented muscular body with blood-sucking rings around their mouth. They can go up to 1 to 30 cm long and mostly live in damp areas.

They are a unique species of turtle, also known as leathery title or lute turtle. They are giant living turtles and have leathery or waxy skin texture.

They are a unique gecko species of the Madagascar region. These lizards have the appearance of dry leaves that help them camouflage from predators. They have a short tail compared to other lizard species and are sized around 99 mm.

These ants are tropical species found in parts of Central and Southern America. They chew leaves and make intricate designs for which they are named. They can carry the load of twenty times their body and have underground nests.

They are a reptilian species with a wide variety of subspecies. They have a muscular epidermal scaled body with tails and are vicious creatures. They travel in a side-to-side motion with successive movements of their limbs.

They are the smallest species of Penguins found on earth in New Zealand and Australia. They are also known as fairy penguins. They have a height of 30 to 33 cm and a weight of around 1.5 kg.

They are a deep ocean fish species found in the Mediterranean sea and Caribbean sea. They have fins with a unique design of red to brownish stripes. They are the length of 47 cm and have venom in their spines that help them catch prey and avoid predators. 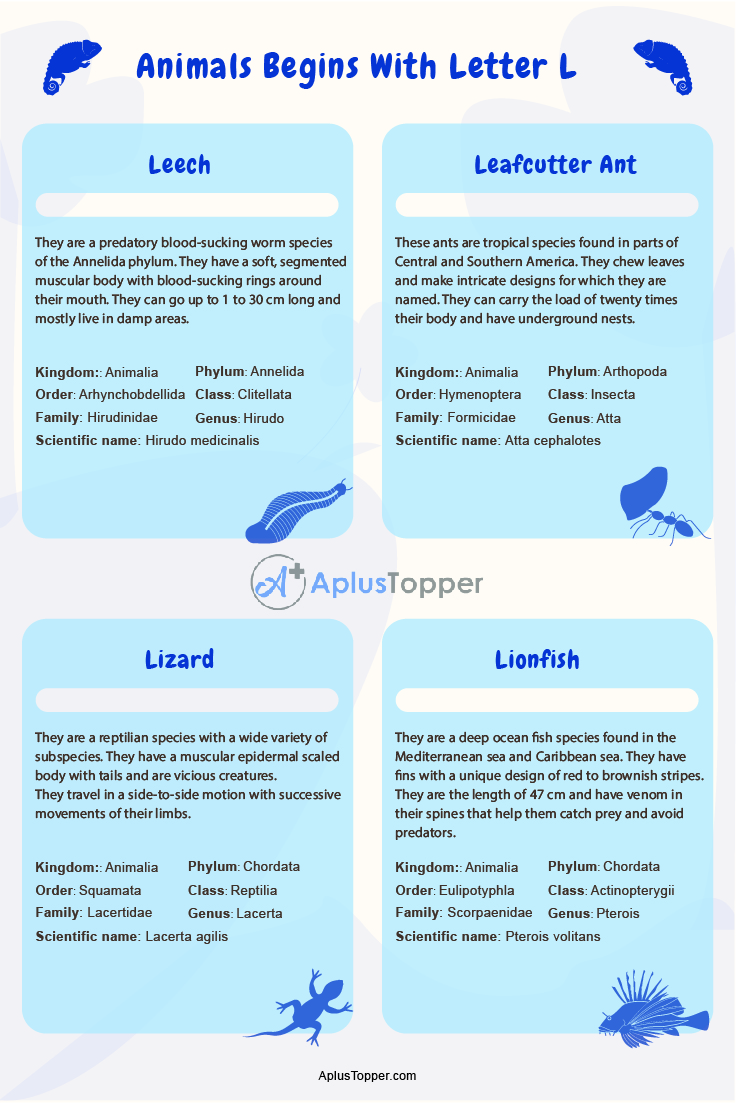 They are termed the ‘king of the jungle.’ they have a muscular build with very short fur coats of light brown colour and a bushy mane. They weigh 110 to 190 kg and have a height of about 160 to 208 cm.

The liger species is an offspring of a lion and a lioness. They are very similar to tigers a d sociable animals. They weigh around 400 lb.

They are a bird species similar to parrots. They are found in Africa and Madagascar. They are seen in pairs and live on trees. They can live up to 30 years.

They are a bird species that have a unique, distinguishable characteristic of feeding their mates’ nectar by their beaks to each other. They are known as Loriini and are found in Australia, New Guinea and Polynesia.

They are a primates species found in borders and areas id South-Eastern Asia, North-Eastern India, Bangladesh, Philippines, China and Java. They are flexible animals with small snouts and large eyes.

They are a bird species that is also called divers in the UK. They are found in parts of America and Eurasia. They resemble geese and have heavyset bellies.

They are a bird species found in areas of North America. They have a short flight range a d bright coloured feathers with a brick brown coloured patch on the back of their neck.

They are a bird species found in Europe. They are also known as Long-tailed bushtit. They have long tails (just like their name) and look somewhat similar to sparrows.

They are an owl species found in Europe, America who belong to the Strigidae family. They are considered to be predatory and hunt over open ground and live in nests on trees.

They are from the Arthropoda phylum, and they are sea animals. Lobsters have long bodies with muscular tails a d five pairs of legs. They are world-famous seafood.

They are freshwater fish that live closer to the seafloor. They are found in seas, rivers and creeks and feed on phytoplankton and zooplankton. Three animals that strat with l are as follows:

They are a domestic Camelidae species of South America. They live in a group and have long necks. Their bodies are coated with thick, dense fur and weigh up to 14 kg.

They are a bird species of Australia. They mimic sounds from their surroundings and have uniquely coloured feathers.

They are medium-sized species of wild cats. They have black hair behind their ears and body colour of beige tone with spots. They can be found across the US, Canada, Eurasia and some other regions.

They are a fish species that thrive in freshwater regions. They are found in areas of Africa, America and Australia. They are also known as salamanders and consist of two lungs (except Australian species).