Animals that Start with I in English: In this vast environment exists an extensive range of unique and bizarre creations. There is a broad range of animals living in this world whose identities are unfamiliar to us, social beings. Therefore, to familiarize you with these creatures, we have created a list of animals whose names begin with the alphabet I. And not just names, but along with that, some fascinating facts about those animals are also provided.

Name of Animals Whose Name Starts With Letter I

It is a species of frog that is native to Spain and Portugal. It is usually spotted in slow-moving streams, ponds, rivers with overhanging vegetation, and glacial lakes.

It is a type of gull that is medium-sized and is found in the Arctic regions of Canada and Greenland.

They are a type of frog that is endemic to Southern Europe.

Ibex is a type of wild goat available in the European Alps Mountain. It prefers steep, rough terrains for living and feeds on grasses, moss, leaves, flowers, and twigs.

They are a type of lizards that are endemic to the tropical areas of the Caribbean, Mexico, South America, and Central America. The meat and eggs of an Iguana are consumed in specific parts of the world.

It is a species of Python that is quite large and is endemic to the tropical and subtropical regions of Southeast Asia and the Indian subcontinent. It kills and feeds on mammals, birds, and reptiles.

It is a type of chameleon that is found in India, Sri Lanka, and some other parts of South Asia. They have the ability to change colors quickly, and the main motive of this color change is to communicate with other chameleons and also to control their body temperature since changing colors allows them to absorb heat.

They are a species of rodents that are found in Sri Lanka and India. They feed on nuts and berries and are very protective of their foods.

It is a migratory Old-World warbler found in mainland Europe and during winter migrates towards sub–Saharan Africa. They have a large head, a broad bill, long wings, and a short-ended tail.

It is a breed of sporting dog famous for its sophisticated build, grace, and mahogany-colored coat. 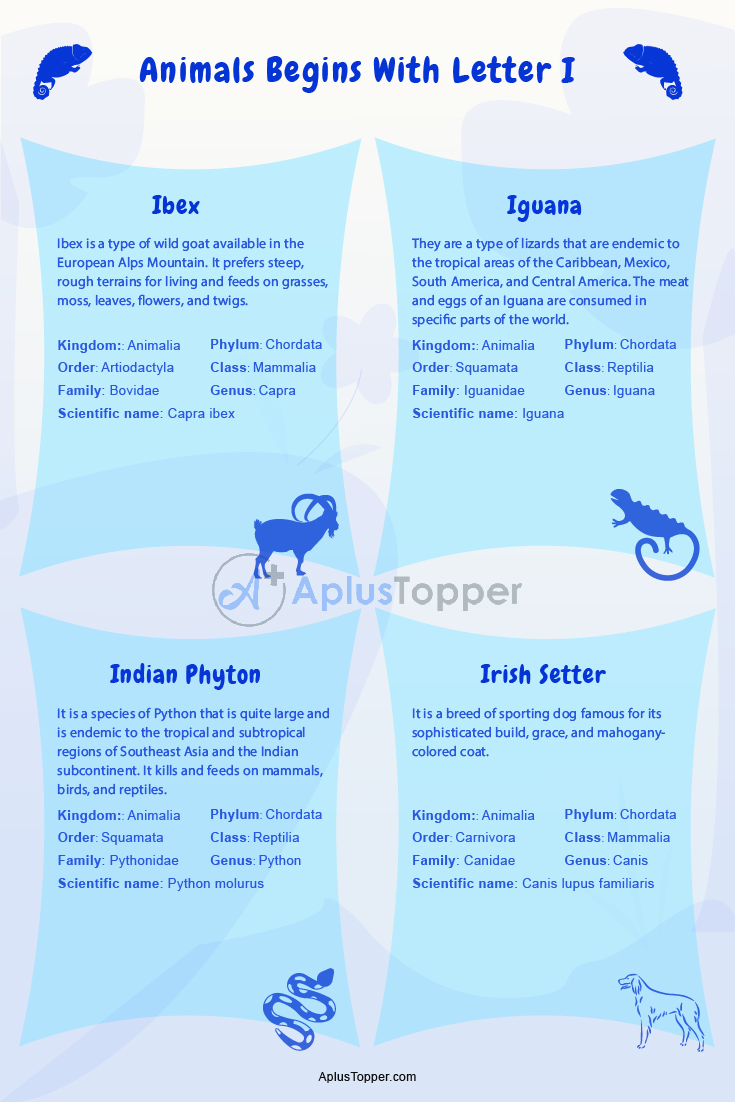 These are the subspecies of Asian elephants and are endemic to mainland Asia.

They are a species of rodents that are native to the North-western United States. These are found in Utah, Montana, Idaho, and Wyoming.

It is a type of small Jellyfish that is found in tropical and temperate waters worldwide. Just as the name says, these Jellyfish follow a process that makes them immortal though there are certain cases where they can still die.

It is a type of wild cat native to the Iberian Peninsula. It feeds on European rabbits, deers, rodents, ducks, etc.

It is a thick-tailed pangolin endemic to the Indian subcontinent. It is hunted for its meat, and body parts are endangered.

Impala is an antelope that is medium in size and is spotted in Eastern Africa and Southern Africa. They prefer shady places and hence inhabit woodlands. 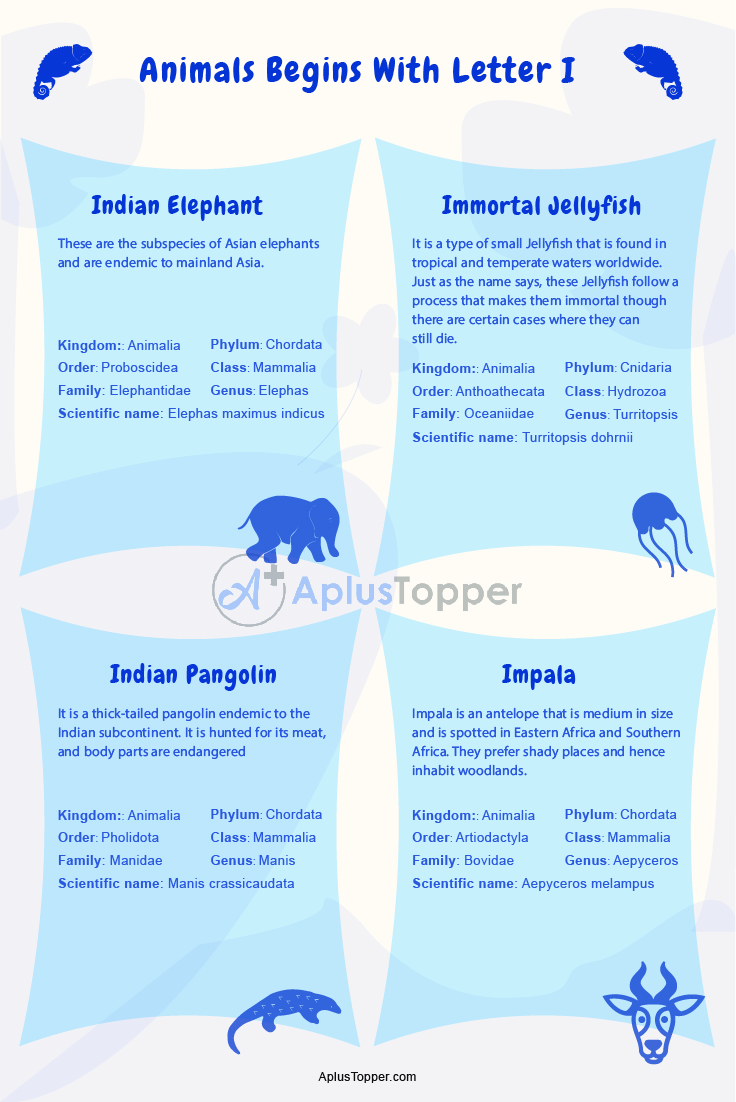 It is a type of rodent that is found in Southern Asia. It feeds on seeds, grains, plants, insects, small birds, roots, reptiles, and small mammals.

It is a type of tree squirrel native to the forests of India. It is arboreal and herbivorous.

It is a bovine that is endemic to South and Southeast Asia. It is the largest among wild cattle and feeds on stems, flowers, leaf blades, and seeds.

It is a type of insect that is distributed in a wide range, starting from Argentina to Canada and covering the Rocky Mountains to the Atlantic Coast.

It is a type of peafowl that is endemic to the subcontinent of India. It is the national bird of India and is celebrated in Greek and Hindu mythology.

It is a historic gazehound dog that is bred from Ireland. It is used in games where speed is required and also is known as a guardian dog.

It is a bird of prey and is endemic to Bangladesh, India, Myanmar, and Nepal.

It is a type of mongoose that is endemic to the Indian subcontinent and West Asia. It lives in burrows and climbs very well, and feeds on rodents, birds’ eggs, snakes, lizards, and different types of invertebrates.

It is a type of frog found in India, Pakistan, Myanmar, Afghanistan, Nepal, and Bangladesh. They are also spotted in Madagascar and Maldives. 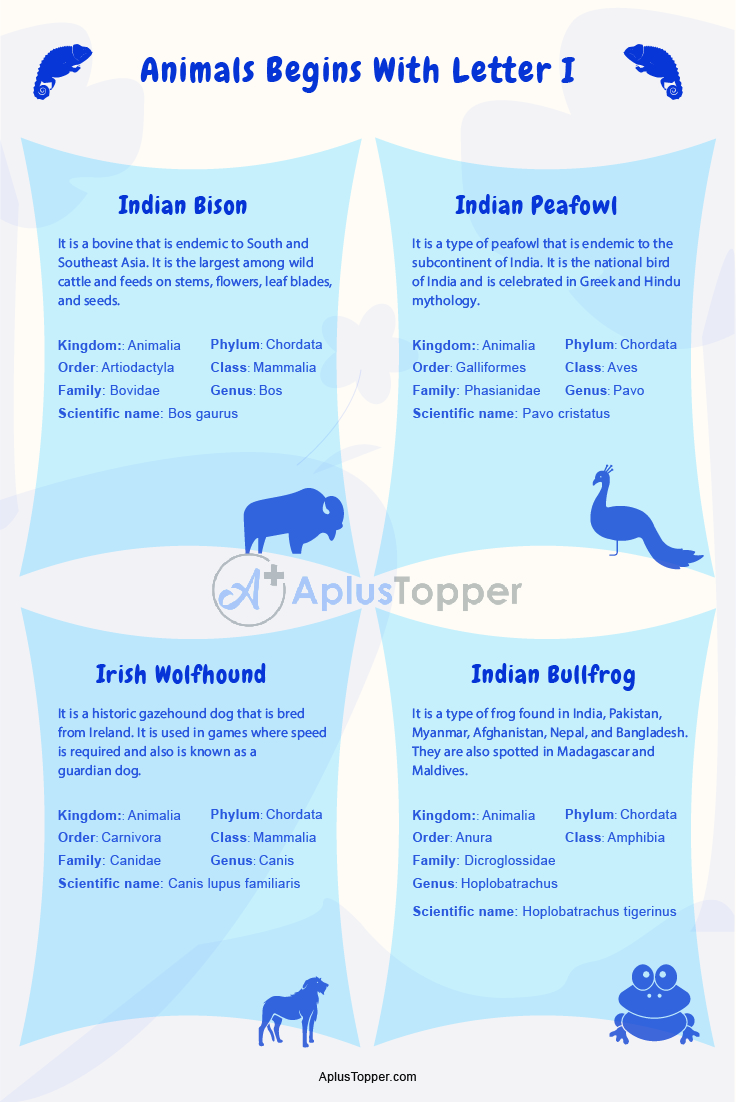 It is a type of rodent found in the Indian subcontinent.

It is a type of hound dog and is very lean, elegant, and agile.

It is a type of flying fox found in the Indian subcontinent. In the whole world, it is among the giant bats. It destroys fruit farms and can transmit various viruses to humans, but its seed propagation and pollination also have a lot of benefits.

It is a type of venomous box jellyfish found in the Northern marine waters of Australia. In the whole world, it is the most odious and the smallest Jellyfish. It even causes a syndrome in humans after stinging that is known as Irukandji Syndrome.

They are small foxes that are native to the six Channel Islands of California. They are not in the least intimidated by humans and are easily tamed.

It is a type of Hawaiian honeycreeper endemic to the Hawaiian Islands. It has a long bill that helps it to extract nectar, and it also feeds on small arthropods.

It is a species of gazelle endemic to India, Afghanistan, Pakistan, and Iran. They prefer to live in arid hills and plains, dry scrub forests, deserts, and light forests.

It is a type of hare endemic to the subcontinent of India and is very common. It is also found in Andaman Islands, Mauritius, Irian, Papua New Guinea, Madagascar, Comoro Islands, etc.

Indri is a type of lemur endemic to Madagascar. Among the living lemurs, it is the largest. It lives in small groups, communicates with each other by singing, and feeds on seeds, flowers, leaves, and fruits.

It is a type of tortoise that is found in dry areas and scrub forests of India, Sri Lanka, and Pakistan.

It is a tiger that is endemic to Southeast Asia.

It is a type of terrier dog that is bred from Ireland. It is an active dog with a red coat that protects it from every kind of environment.

It is a type of rodent found only in Madagascar.

It is a type of Italian gazehound dog. It is used for hunting and is also kept as a companion dog.

It is a type of venomous snake that is native to semi-arid regions of east-central Australia. It feeds on House Mouse, rodents, and other mammals.

The insect is the largest class of the Phylum Arthropoda. They possess a three-part body, three pairs of jointed legs, compound eyes, and one pair of antennae. They are found in almost all environments and cover ninety percent of the animal life forms on Earth.

Insular mole is a type of mammal that is found in Taiwan and China.

It is a type of mammal that is native to Nevada and Eastern California.

They are the subspecies of leopard cats and are found only in the Japanese Island, Iriomote.

It is a type of crab living in freshwater water, sea, and land that is found worldwide. Some isopods feed on dead and decaying plants and animal matter, some are grazers, some of them are predators, and some are external or internal parasites, mainly fish.

They are a type of lizard that is endemic to France, Slovenia, Croatia, Bosnia, Herzegovina, Serbia, Italy, Montenegro, and Switzerland. They are also found in Canada, Turkey, Spain, and the United States and feed on different types of insects and invertebrates.

They are the subspecies of grey wolf endemic to the Italian Peninsula and are found in the Apennine Mountains and the Western Alps.

They live in packs of two to seven animals.

It is a small gull that is bred in the high Arctic and is found in Northernmost North America, Greenland, and Eurasia. They feed on rodents, fish, eggs, and petite chicks and also tend to follow polar bears and such other predators to feed on the remains of their kill.

It is a type of medium-sized bird that is endemic to Asia. It is a boisterous bird as it has a very sharp call. These birds feed on different types of insects.