Animals that Start with H in English: In this vast world exists a wide range of unique creatures. The field is so vast, and we hardly remember the names of all those creatures. So, to ease your worry, this article consists of a list of animals whose names begin with the alphabet H. Along with the list, some fascinating facts about those animals are also provided. These animals inhabit different parts of the world, and each of them has its unique and different characteristics. In this article, you can find the sea, Farm, Cool, Slow, weird and Australian Animals that start with C.

Name of Animals Whose Name Begins With H

They are not true crabs but are a different order of arthropods. They live in brackish water and marine water.

It is a ray-finned saltwater fish. It is found in the North Atlantic Ocean and the seas associated with it. It is a widespread fish for eating.

They are a type of slime-producing marine fish. They are eel-shaped and hence are often known as slime eel. Hagfishes are eaten in Korea. Their slime and skin are used for clothing purposes.

It is a large species of Wrasse. They are found in the coral reefs of the region of Indo Pacific and on the east coast of Africa.

Herons are coastal and freshwater birds. They have long necks and long legs. They also have long beaks. Except for Antarctica, they are found everywhere. They are not the highest mountains, coldest extremes of the Arctic, and dry deserts. Herons live on wetlands and are carnivorous. They feed on aquatic animals.

Hamsters are a species of rodents. They are tiny and are kept as pets. During the day, in the wild, they remain underground to hide from predators. They are an omnivorous species and eat meat as well as vegetables. It is a species of baleen whale. They are found around the world, and they usually feed on small fish and krill. The shape of their body is very distinctive since they have a knobbly head with long pectoral fins.

It is a species of seal. It is known to be a true seal and is spotted along the marine coastlines of the Northern Hemisphere. Their nostrils are V-shaped. Harbor fishes feed on salmon, crabs, sea bass, herring, flatfish, squid, shrimp, etc. They also kill and eat different kinds of ducks.

It is an African Antelope. It consists of a particularly elongated forehead and oddly shaped horns. The neck of Hartebeests is short, and they also have pointed ears.

Hares are similar to rabbits. Their sizes and diets are identical. Unlike rabbits, they do not dig burrows and instead make nests on long grass. They are long-eared and live alone or in pairs. Hares are endemic to Eurasia, North America, and Africa.

It is a species of Earless Seal. It is endemic to the Arctic Ocean and northernmost the Atlantic Ocean. They are carnivorous and feed on invertebrates and fishes. 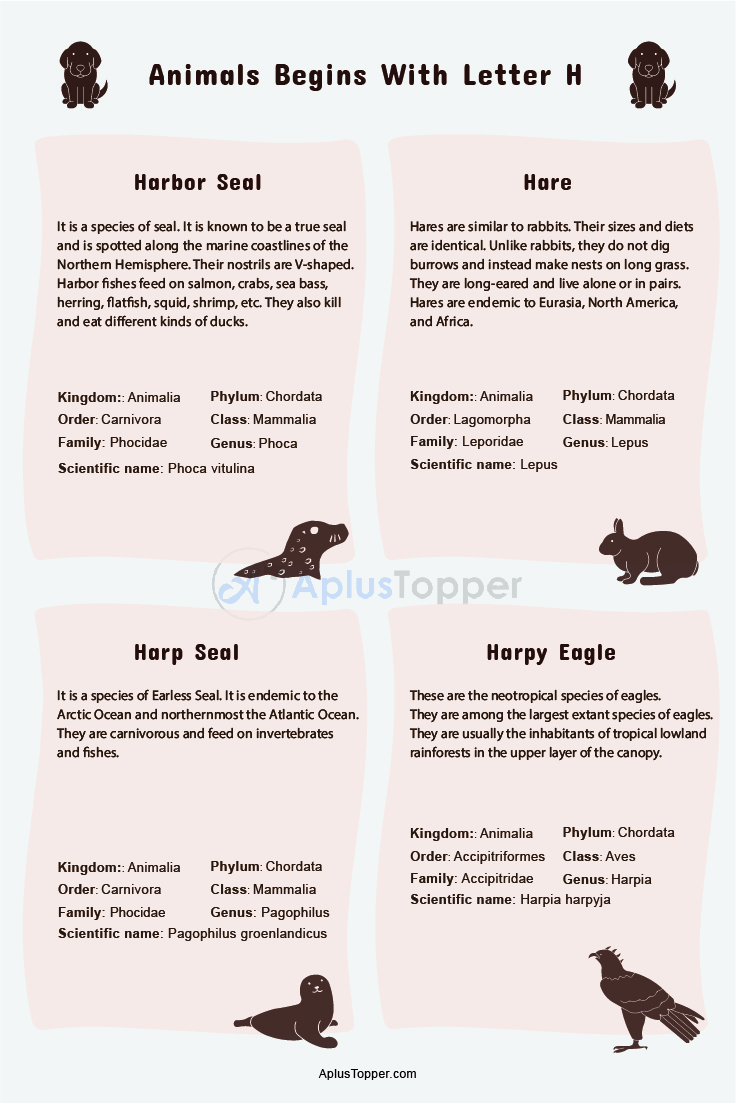 It is a bichon-type dog and is also the national dog of Cuba. It is small in size and has a very dynamic nature, and for this reason, it is considered an ideal pet.

It is a species of bird crow which is the most endangered. In the wild, currently, it is extinct. Before extinction, it was found only in the western and southeastern parts of Hawaii.

It is a species of diurnal hawks. They fly low and hunt on reptiles, small mammals, and birds.

Hawks are a species of medium-sized diurnal birds. As it is easier to find prey in deserts and fields, they prefer to live in those places, and since they can live anywhere, they are found in moist areas, mountainous plains, and tropical regions. They feed on small animals.

These are tiny mammals and are endemic to northern Europe and Asia Minor. They feed on berries and nuts.

It is a spiny mammal. It is spotted in parts of Asia, Europe, Africa, and New Zealand. It feeds on mushrooms, berries, melons, frogs, snails, watermelons, etc.

It is a small mammal. It has a pointed snout, large rounded ears, and a tail that is hairy and long.

It is a large semi-aquatic mammal that is the third-largest land mammal. It is herbivorous and is endemic to sub-Saharan Africa. They live in rivers and lakes and are among the most dangerous animals in the world. 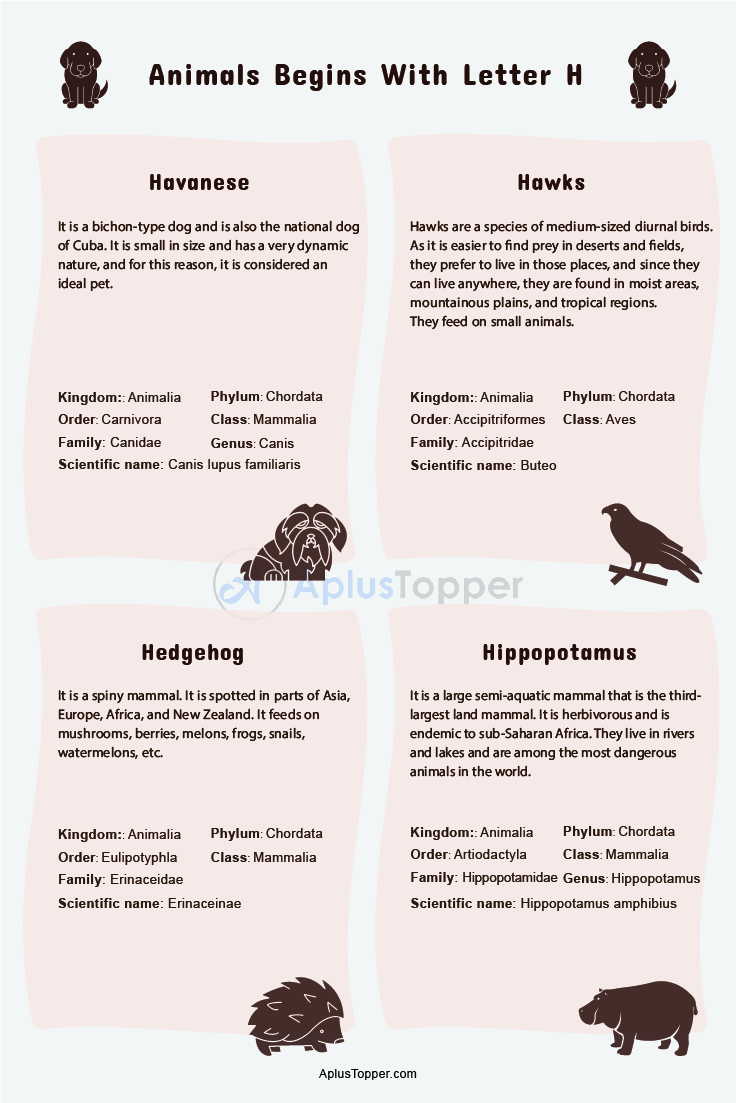 It is a small bird that belongs to the species of sparrows. It is found in most parts of the world and lives in urban and rural areas.

It is a species of rhinoceros beetle endemic to the rainforests of South America and Central America. It is the giant flying beetle globally, and it feeds on peaches, grapes, apples, and pears.

It is a forage fish and moves in large schools. It is found in shallow and temperate waters of the North Atlantic Ocean, West coast of South America, Arabian Sea, Indian Ocean, Bay of Bengal, and North Pacific Ocean. Consumed as food, this fish can be: pickled, smoked, fermented, salted, etc. for eating.

Highland cattle are the breed of rustic cattle that originated in the Scottish Highlands. They are bred for beef.

Hellbender is a species of giant aquatic salamanders native to the Central and Eastern United States. They are more extensive in size when compared to other salamanders, and it eats crayfish and small fishes.

It is a mammal that is found in the Indian subcontinent, Africa, and Southwest Asia. Beehives are raided by this animal in search of honey and bee larvae. It has very thick skin, and other than honey, it also feeds on frogs, berries, rodents, snakes, roots, bulbs, insects, birds, turtles, tortoises, etc.

It is a species of cockroach and is endemic to Madagascar Island. Despite being wingless, it can climb excellently. It makes a hissing sound while expelling air through its respiratory organ, and hence it is named as such.

It is a flying insect and, except Antarctica, is spotted on every continent. Not only are these insects famous for their honey, but the wax produced by them is also used for making lip balms, soaps, candles, etc. The sole natural source of protein for a honey bee is pollen. It obtains all of its nutrients from nectar and pollen.

It is a colorful bird that is notable for its distinctive crown of feathers and is spotted across Europe, Africa, Madagascar, and Asia. It feeds on seeds, small insects, small reptiles, and berries.

It is a species of tropical bird known for having chicks with claws on their wing digits. It is found in riparian forests, mangroves, and swamps of the Orinoco and Amazon basins in South America.

They are a species of bullhead shark and are native to the subtropical and warm-temperate areas of the East Pacific Ocean from Central California to the Californian Gulf. They are often spotted in public aquariums as well.

It is a type of bird spotted in Asia, Africa, and Melanesia. It feeds on insects, fruits, and other small animals.

They are a species of North American lizards, and they tend to move very sluggishly. They tend to adapt to semi-arid or arid regions.

It is a type of seabird seen in the North Pacific Ocean, including the coasts of Siberia, British Columbia, and Alaska. It lives among rocky cliffs and steep slopes and feeds on fish.

It is a giant wasp and is found in the tropics of Asia, although there are certain species of hornet that are found elsewhere as well. It feeds on plants with high sugar and nectar.

The horse is a domesticated mammal. It is used in a variety of sports competitions, police work as a source of entertainment and therapy. Milk, meat, hair, hide, bone, and pharmaceuticals are some of the products derived from horses.

Hyenas are carnivorous mammals found in Africa and Asia and are proficient hunters. They possess excellent vision and have a great ability to hear and smell their prey.

It is a migratory bird found in North Africa, Europe, and across the Palearctic. During winter, the house martin migrates toward sub-Saharan Africa and tropical Asia. It catches insects while flying and also prefers to migrate to those places where flying insects are plentiful.

It is a type of bird that is endemic to the Americas. Hummingbirds are named as such because by beating their wings, they create a humming sound that is audible to humans at high frequencies. Even though these birds consume spiders and flying insects, they still specialize in feeding flower nectar.

It is a species of porpoise, i.e., a marine mammal. As the name suggests, it stays near coastal areas or river estuaries and is a common sight for Whale watchers. It is spotted in the Black Sea, North Pacific, and North Atlantic.

It is a small songbird that is found from Canada to southernmost South America and is the only wren that is typical. It has a specialty of disappearing in crevices while hunting or while seeking for shelter.

It is a type of insect that hovers over flowers. Except for Antarctica, they are found almost everywhere. The larvae feeds on a wide variety of foods while the adults-only feed on nectar.

They are the largest type of New World monkeys and are endemic to the South American and Central American forests. As the name says, they are well-known for their loud howls, which can travel 5km in a dense forest.

It is a South American penguin that lives mainly in the Pingüino de Humboldt National Reserve located in the North of Chile; however, most of coastal Peru is under its habitat. They have also become a focus of ecotourism.

It is a medium-sized thrush found in North America. The song of this bird is ethereal and is known to be the finest sound in nature.

It is a giant spider that is famous for its mode of hunting and speed. Their venom contains deadly poison and can inflict severe bites on humans.

It is a type of shark that is found worldwide in warmer waters along continental shelves and coastlines. Since the structure of its head resembles a hammer, it is named as such. During the day, these sharks swim in schools, and at night, they swim alone.

Hamerkop is a middle-sized wading bird spotted in Arabia, Madagascar, and Africa. It feeds on shrimps, fishes, amphibians, insects, and rodents.

These are small and thickset mammals that are limited to Africa. They are herbivorous and are also closely related to elephants.

They are a type of crab available worldwide. These crabs use empty shells for protection. They are usually found in muddy buttoned water or sandy marine waters and sometimes on trees and land.

It is a type of bird endemic to western North America and has been introduced in Hawaii and the eastern part of North America. It feeds on berries, seeds, and grains.