Animal Farm Essay: George Orwell’s “Animal Farm” published in 1945 brought him worldwide fame as a writer of political allegory. Through the novel, George Orwell tells us about the problems of the Russian revolution (1917) and the rise to power of Joseph Stalin and its oppressive communist state.

One of the main ideas of the novel is about the abuse of power. The phrase ‘power corrupts, absolute power corrupts absolutely. Power often leads to corruption. There cannot be equality under totalitarian rule.

We provide the students with essay samples on animal farm essay of 500 words and a short piece of 150 words on the same reference.

The novel starts by introducing us to a setting where one night all the animals at Mr Jones Manor Farm gather together to hear old Major an old – well-respected boar pig’s dream.

He described that all animals should be free from the tyranny of their human masters. They should all start an uprising against Mr Jones and other human beings. After that meeting, old Major died.

The philosophy of animalism inspired all the animals of the farm: the plot starts with the main two characters of the novel two pigs, Napoleon and Snowball are successful in doing so, and a revolution occurs, and Mr Jones and his men from the farm. Initially, the rebellion is a huge success, and the animal farm prospers.

Pigs, because of their intelligence, became the supervisors of the farm. Napoleon emerges as a greedy, selfish influential leader. Napoleon would steal the cow’s milk and apples to feed himself and other pigs, and he had even entrusted Squealer, a pig with the ability to pursue other animals that pigs are always morally correct. They had to justify the action and decision of Napoleon. There was a fight between Napoleon and Snowball fought to gain power and influence over the farm. Napoleon then emerges as the leader of the farm, and his lust for power increases to a point where he became a dictator.

Napoleon himself led a luxurious life in Mr Jone’s house, and the other animals of the farm led a harsh life, and they received less and less food, while the pigs grew fatter. Years passed, and the animal farm expanded its boundaries more and more after Napoleon purchased fields from neighbouring farm.

Napoleon and the pigs rewrite the written and oral histories of the farm in addition to the slogans, songs, commandments and poems to serve their needs and maintain their authority. The pigs’ catchphrases brainwashed the other animals to such an extent that even if the dogs kill dozens of animals to supposedly having conspired with Snowball, no one questions Napoleon’s leadership.

Many readers believe that Orwell tried to show Animal Farm as an influence of the Russian revolution due to the naming of the pigs, the story’s plot and the condition of the farm. The pig experiences different types of struggles in the story. One of the conflicts is separating the pigs from the rest of the animals, which represents a large-scale man vs culture conflict on the farm, and these explain how oppression arises from manipulation. The conflicts are solved by Napoleon’s deception, cruelty and deviousness.

Eventually, we see in the story that the pigs begin walking upright, carrying whips and wearing clothes and also adapting the qualities of their human oppressors. Through the tale, Orwell gives us a message that in their attempt to set up an equitable order the pigs like their human counterpart misused power and became oppressors and manipulated the ignorance and innocence of the other animals and birds of the farm. 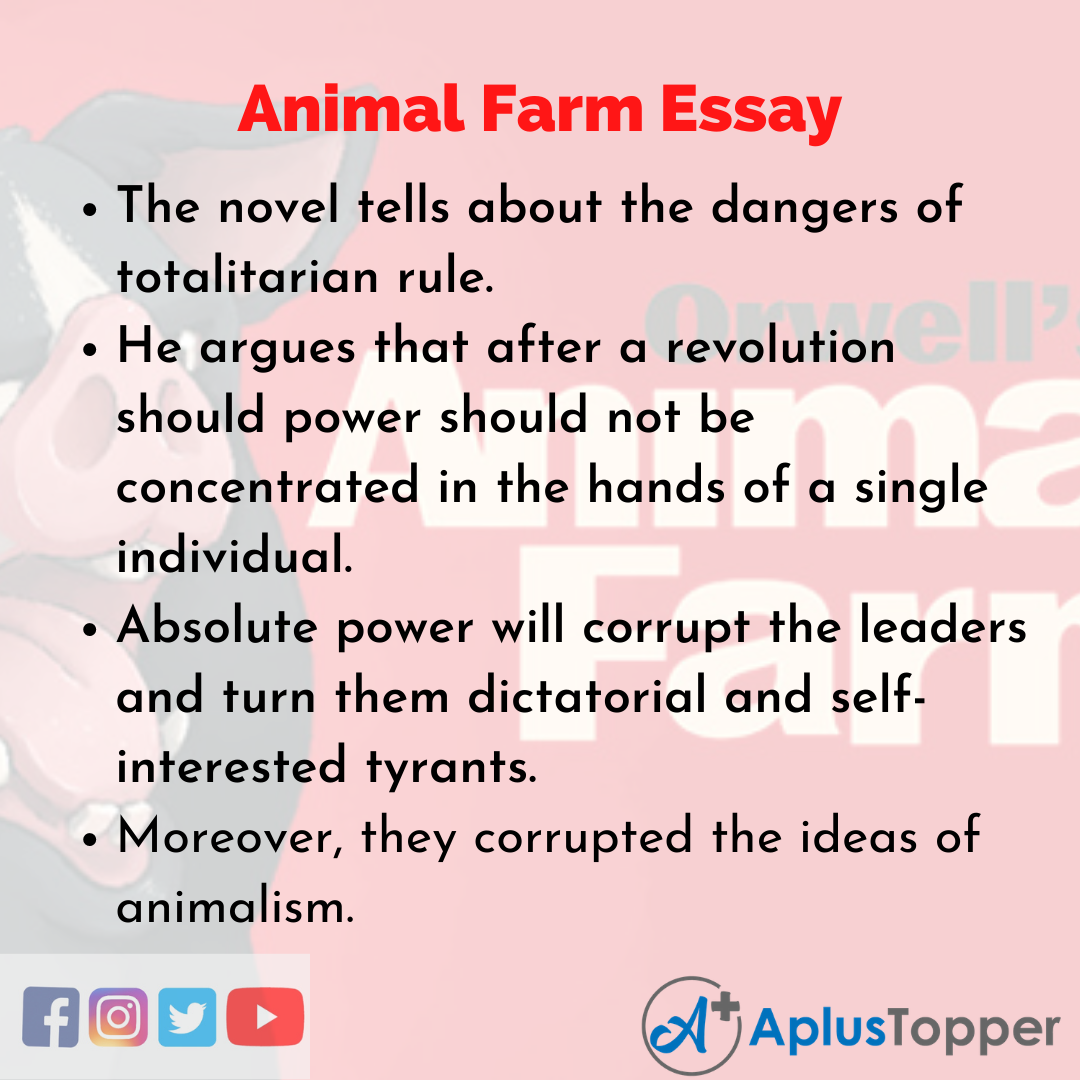 Through the novel, the writer George Orwell conveys the message of how selfish, political leaders work only for their vested interests and consolidate power, and take away the civil and political rights of the people.

Ignorance and uneducated masses can be easily manipulated, oppressed and controlled under an authoritarian rule. The characters of the novel reflect the political figure of the time and the unjust and oppressive regime of Stalin.

Most of the events in the story have some significance with the Russian revolution (1917). Through ‘Animal Farm’ George Orwell tells us that in communism, most of the political leader misused their excessive power and that corruption may turn into violence as it was in the animal farm.

In the same way in the novel, Napoleon misused his power, cheated the animals and deprived them of their freedom and welfare and invaded the laws just as it happened in the then Soviet Union under the leadership of Stalin.

10 Lines on Animal Farm in English Question 1.
What is the moral lesson of the Animal Farm Essay?

Answer:
The main moral lesson of animal farm is that “Power corrupts and absolute power absolutely”. Throughout the novel, we see how Napolean gradually became all power and ultimately misused power.

Question 2.
What was the purpose of the novel Animal Farm written by George Orwell?

Answer:
The purpose of the novel ‘Animal Farm’ by George Orwell was to satirise the then communist government of Joseph Stalin.

Question 3.
Why is Animal Farm important?

Answer:
The novel ‘Animal Farm’ is important because it throws lights on the potential dangers of totalitarian rule.

Question 4.
Why is Animal Farm a fable?

Answer:
The novel ‘Animal Farm’ is a fable because, in, the novel, the writer uses animal characters to reflect the political realities of his time.