In this revolutionary war, Great Britain’s 13 of North American colonies were given political independence. Local militiamen clashed with the British soldiers on April 19th, 1775 in the Battles of Lexington and Concord in Massachusetts.

We are providing students with samples of essay on a long essay of 500 words and a short essay of 150 words on the topic American Revolution for reference.

Long Essay on American Revolution is usually given to classes 7, 8, 9, and 10.

These tensions had been building for more than ten years, even before the beginning of the American Revolution in 1775. The French and Indian War or Seven Years’ War that happened from 1756 to 1763 brought new colonial territories under the British crown.

When in 1770, the British soldiers openly fired on the mobs of the colonists, five men were killed. This incident led the colonial residence to engage in violence. The people of today know this incident as the Boston Massacre.

After December 1773, a group of Bostonians dressed as Mohawk Indians boarded some British ships and put 342 chests of tea in the Boston Harbour.  Boston Tea Party was happening at that time. The Parliament became outraged, and they passed a series of measures designed to assert imperial authority in Massachusetts again. These acts were named as Coercive Acts.

In response to this Coercive Acts, some delegates of the North American colonies including big names like George Washington of Virginia, John and Samuel Adams, Patrick Henry from Massachusetts and John Jay from New York held a meeting in September 1774 in Philadelphia.

This continental congress denounced maintenance of the British army in the colonies without their consent and even issued a declaration of rights for each citizen of those colonies in North America. These rights included liberty, property, assembly and the last one, trial by jury. The First Continental Congress agreed to meet again in May 1775 to take further necessary steps, but unfortunately, the violence already broke out at that time.

On April 18th, 1775, tons of British troops marched from Boston to Concord that was nearby and Massachusetts at night to seize an arms cache. Paul Revere and some other riders sounded the alarm, and thus, colonial militiamen started mobilizing to intercept the Redcoats.

On the next day, the British soldiers clashed with the local militiamen in the Battles of Lexington and Concord in Massachusetts ad that officially started the Revolutionary War of America.

During the Second Continental Congress meeting, delegates that included two new additions Benjamin Franklin and Thomas Jefferson decided to form a Continental Army. George Washington was appointed as the commander in chief of the army. On June 17th, the Battle of Bunker Hill was won by the British Army.

By June 1776, while the Revolutionary War was in full swing, a growing number of colonists had come to earn independence from Great Britain. On July 4th, 1776, America’s Continental Congress voted to gain the Declaration of Independence. This petition was drafted by a five-person committee including Franklin and John Adams.

Washington made a surprise attack in Trenton, New Jersey, on Christmas night and won another victory and then the Battles of Saratoga. And, this is how the British Government were forced to hand over independence to the residence of 13 colonies of North America that were under the British crown for a long time. 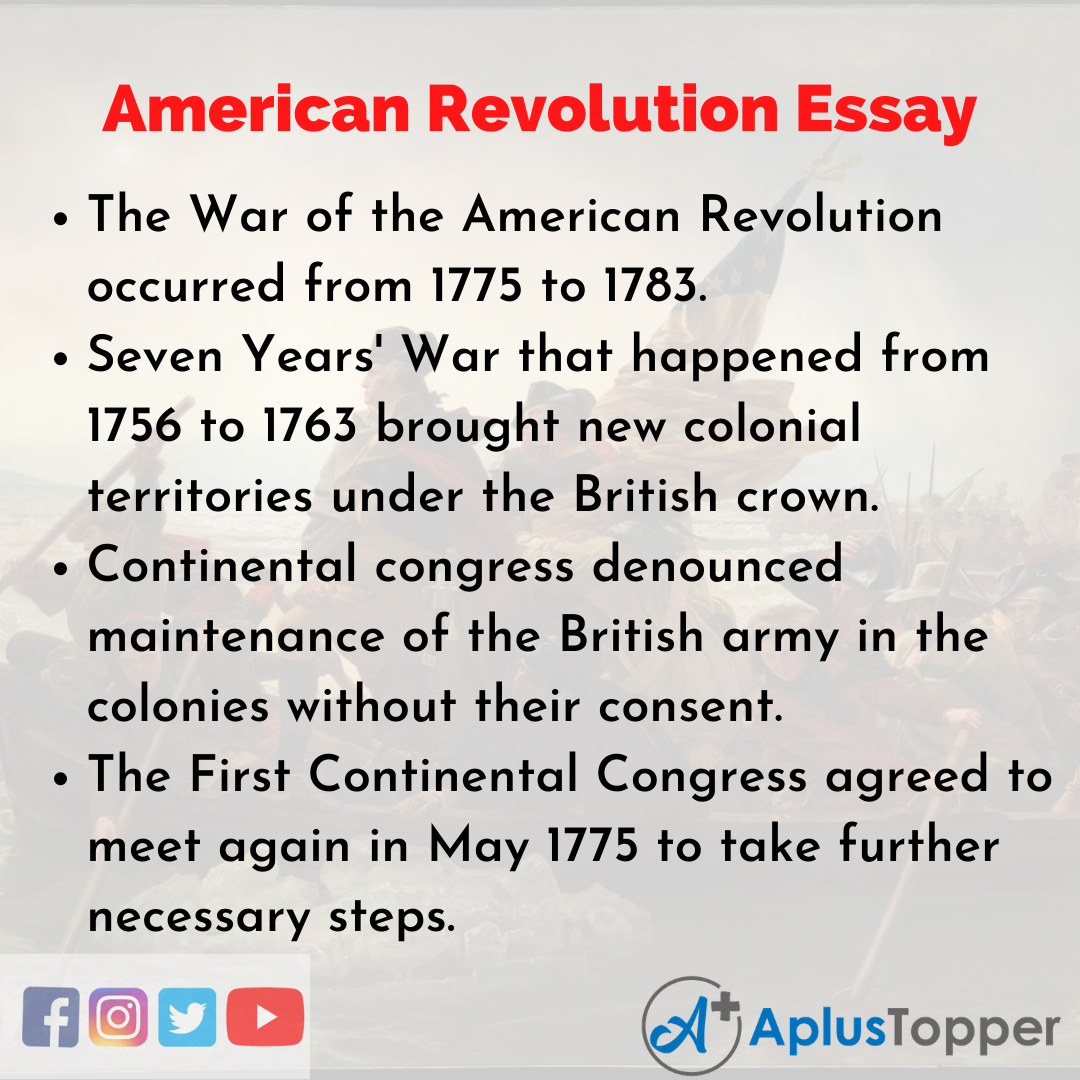 Afterwards, this revolutionary war took an international look when, in 1778 and 1779, France and Spain joined the colonies against Britain. And, the Netherlands at that time was already involved in a war against Britain.

Americans won the war on lands with the help of two types of organizations, namely the Continental Army and the state militias. Militias were poorly disciplined, and elected officers summoned them for less than three months.

Later Washington took the command of the Continental Army and fought the Battle of Bunker Hill where the British army won. In the next war, i.e., the Battle of Trenton and Princeton was won by the American force under the leadership of Washington. In 1777 the Battles of Saratoga was fought, and Washington brought victory for America, and then the British Government agreed to give North America their independence.

1. The War of the American Revolution occurred from 1775 to 1783.
2. Seven Years’ War that happened from 1756 to 1763 brought new colonial territories under the British crown.
3. Continental congress denounced maintenance of the British army in the colonies without their consent.
4. The First Continental Congress agreed to meet again in May 1775 to take further necessary steps.
5. Delegates that included two new additions Benjamin Franklin and Thomas Jefferson decided to form a Continental Army.
6. Washington took the command of the army.
7. On July 4th, the American Continental Congress voted to gain the Declaration of Independence.
8. Washington fought the Battle of Bunker Hill, where the British army won.
9. The American force won the Battle of Trenton and Princeton under the leadership of Washington.
10. The war ended in 1783, and from the United States of America got their recognition as an independent country. 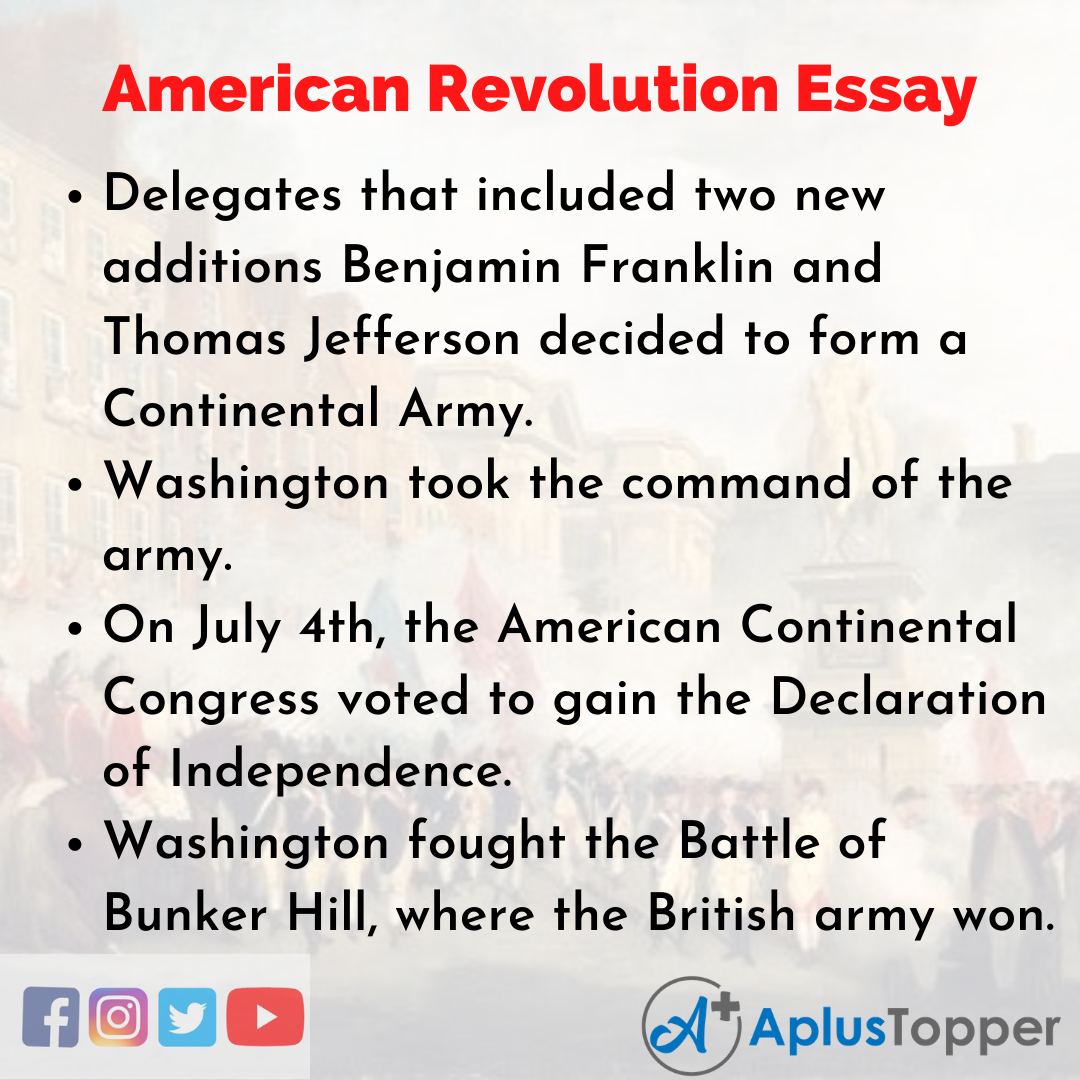 Question 1.
When did the American Revolution happen?

Question 2.
Who was the commander in chief of the Continental Army?

Answer:
George Washington was the commander in chief of the Continental Army.

Question 3.
Who won the Battle of Bunker Hill?

Answer:
The British Army won the Battle of Bunker Hill.

Question 4.
Which battle is considered as the turning point of the American Revolutionary War?

Answer:
The Battle of Saratoga is considered as the turning point of the American Revolutionary War.