American Exceptionalism Essay: American exceptionalism is a perspective of the United States of America that the nation sees its history as innately different from that of other countries.

It started from the emergence of the American Revolution and developing a distinctively American ideology, “Americanism”, which is based on equality before the law, liberty, republicanism, representative democracy, individual responsibility, and laissez-faire economics. This ideology is referred to as “American exceptionalism.”

We are providing children and students with a long essay sample of 500 words and a short essay of 150 words on the topic “American Exceptionalism” for reference.

Long Essay on American Exceptionalism is usually given to classes 7, 8, 9, and 10.

American exceptionalism is a concept which portrays that the United States of America is a unique and distinct country compared to the rest of the world. According to a variety of research conducted over the years, it can be deduced that most Americans consider the United States as an “exceptional” nation.

But the question one might ask is- what makes it unique, and is it a good thing? Based on the above explanation, it can be imagined more on the positive side since it is displayed as having preponderance over others.

On the contrary, exceptionalism shows us its own set of disadvantages; for example, the United States has been predominantly exposed to negative traits like racism, discrimination, violence, and so forth, which all contradicts with the factors in America’s unique aim, which is to uphold human rights and to display liberty and democracy.

Fortunately, Eleanor and Franklin Roosevelt, in 1948, the United States started the process of becoming a United Nations by writing a universal declaration of human rights. Thanks to this decision, it made America be at the top at the international level.

Long before the term existed, the thought of American exceptionalism was constructed into our culture, a thought linked to the idea of freedom. The USA’s idea as a unique representation of liberty in a world infested with oppression goes back to the American Revolution. The phrase “American Exceptionalism” seems to have originated in debates in the 1920s and 30s among American communists on whether American society’s distinctive characteristic inhibited the transition from capitalism to socialism.

Exceptionalism transformed into a weapon in the Cold War in the 1950s, which suggested a national responsibility to lead military forces of the “Free World” in the containment of Soviet power or communism. The terrorist events of September 11, 2001, again triggered the idea of exceptionalism as Americans came to think of it as an act of hatred because they are free. A new sense of American mission was born, now identified with the global war on terror.

Most recently, American exceptionalism had emerged when President Obama said that he does not believe in American exceptionalism. It caused an issue in his electoral campaign in 2012. It was because of his race and his lack of birth certificate. Ultimately, like his predecessors, Obama explained the uniqueness of the United States as a rationalization for America’s right to intervene in the affairs of nations throughout the world. 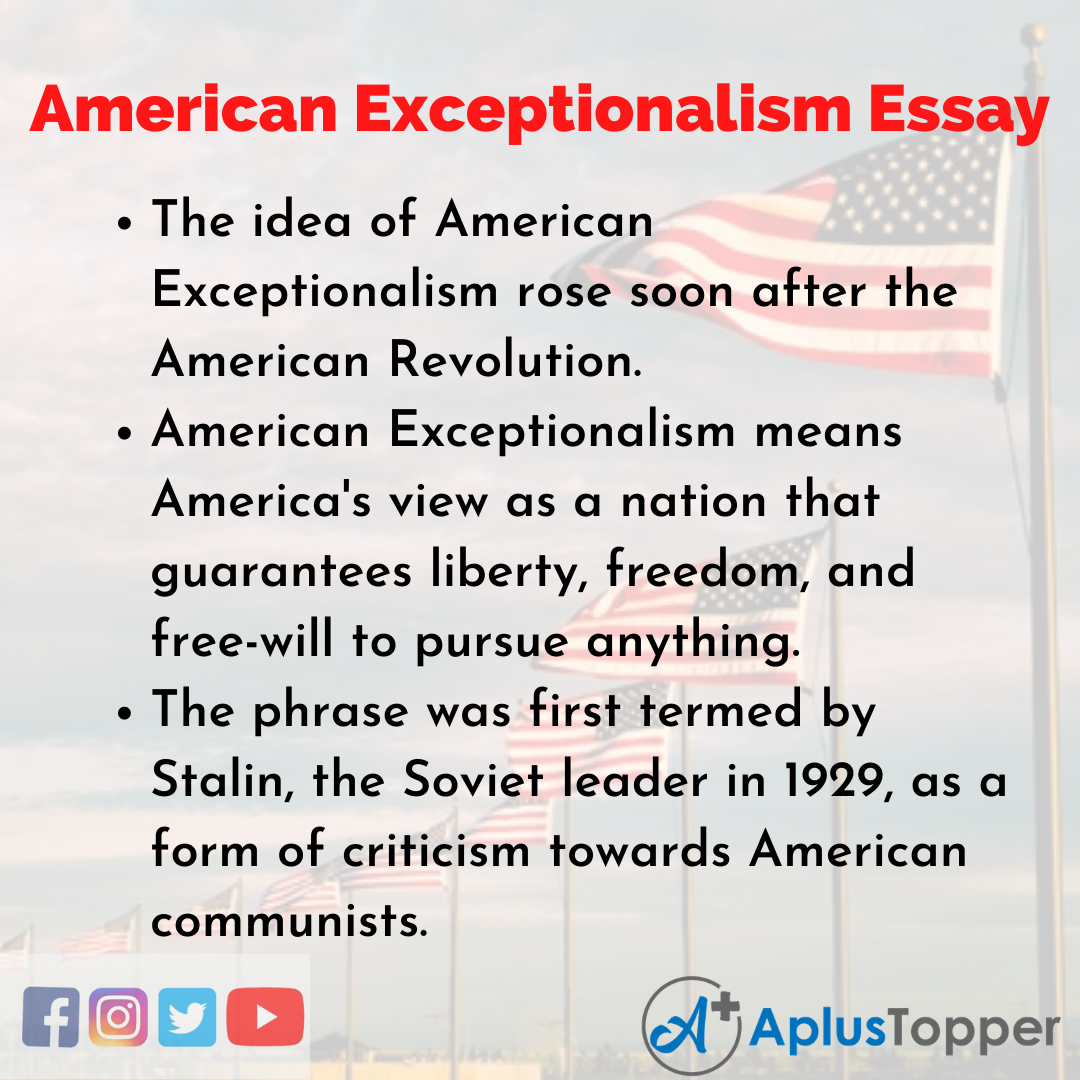 The term ‘American Exceptionalism’ has a long history and has been applied to a whole range of unique features to US society, particularly its history, identity, and culture.

The phrase means the United States view as a country that embodies liberty, equality, and freedom. This idea of exceptionalism rose soon after the American Revolution and identifies America as the ‘free world’ where people from different backgrounds can pursue their dreams. However, those ideals are contradictory to how America works in reality.

Few can also describe American exceptionalism as a belief that the US has the authority to intervene in other nations’ matters. The United States feels a duty to spread its ideals around the world.

American exceptionalism is indeed a complex topic and shall need not to explore all the twist of it. Lastly, exceptionalism bothers every non-American in America’s ignorance to learn from other cultures and nations and having pride that portrays them as superior to all the other nations.

10 Lines on American Exceptionalism in English 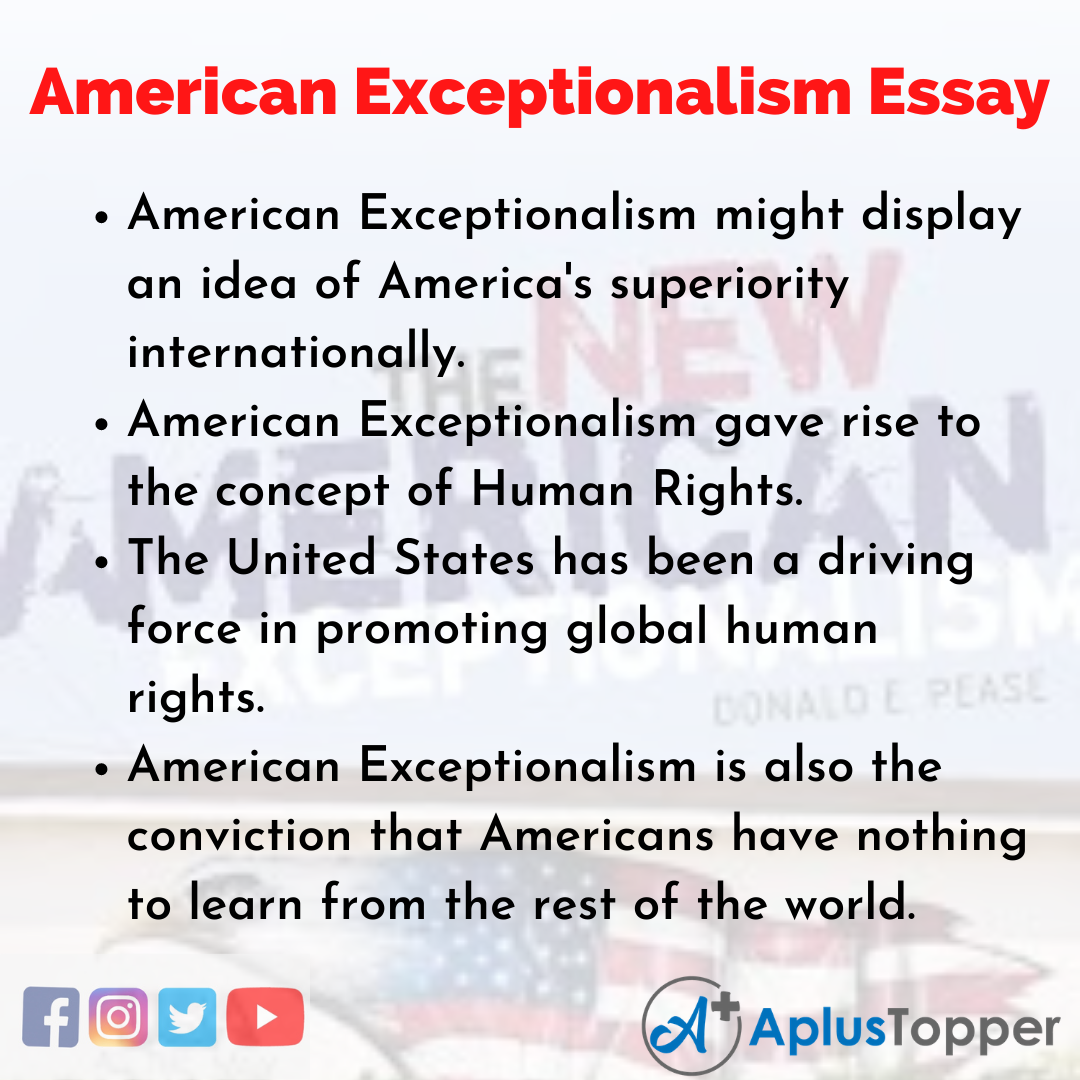 Question 1.
What is the meaning of American exceptionalism?

Answer:
American exceptionalism is the view that the USA is marked by a distinct set of qualities such as equality, self-rule, and limited government. The US gives the ability to pursue one’s desires without interference.

Question 2.
Where did American exceptionalism originate from?

Answer:
The phrase “American exceptionalism” was originally termed by the Soviet leader Joseph Stalin in 1929. Critiquing a revisionist faction of American communists that deemed American political climate was unique and made it an ‘exception’ to certain factors of Marxist theory.

Question 3.
When did the US ratify the Universal Declaration of Human Rights?

Answer:
America was one of the leaders in creating the Universal Declaration of Human Rights, which was signed in 1948.