Alexander endeavoured to reach the “ends of the world and the Great Outer Sea” and invaded India in 326 BC, winning an important victory over the Pauravas at the Battle of the Hydaspses.

We are providing students with essay samples on a long essay of 500 words and a short essay of 150 words on the topic Alexander the Great for reference.

Long Essay on Alexander the Great 500 Words in English

Alexander the Great was a king of Macedonia who conquered an empire that stretched from Balkans to modern-day Pakistan. He was born on July 20th, 356 BC in Pella, which was the administrative capital of Macedonia.

Alexander was the son of Philip II and Olympias, one of Philip’s eight wives. He was brought up with the belief that he was of divine birth. From his early days, Olympias had encouraged him to believe that he was a descendent of heroes and gods. Nothing he had accomplished would have discouraged him from believing. The personality of Alexander the Great was a paradox. He had great charisma and force of personality, but his character was full of contradictions, especially in his later years. However, he had the ability to motivate his army to do what seems to be impossible.

Alexander was a visionary. His ability to dream, plan and strategize on a large scale allowed him too many battles, even when he was outnumbered. It also helped motivate his men, who knew they were part of one of the greatest conquests in history. Alexander could be inspiring and courageous, continued Abernethy. He was devoted to training his mean, rewarding them with honours and spoils, and going into battle beside them, which furthered their devotion and confidence. The fact that Alexander was young, beautiful and empathetic only helped to increase his influence on his soldiers and subjects.

His father was often away, conquering neighbouring territories and putting down revolts. Nevertheless, King Philip II of Macedon was one of Alexander’s most influential role models. Philip ensured Alexander was given a noteworthy and significant education. He arranged for Alexander to be tutored by Aristotle himself. His education infused him with a love of knowledge, logic, philosophy, music and culture. The teachings of Aristotle would later aid him in the treatment of his new subjects in the empires he invaded and conquered, allowing him to admire and maintain these disparate cultures.

Alexander watched his father campaign nearly every year and win victory after victory. Philip remodelled the Macedonian army from citizen-warriors into a professional organization. In early 324 BC, Alexander reached the city of Susa in Persia. Wanting to unite the Persians and Macedonian and create a new race loyal to him, he ordered many of his officers to marry Persian princesses at a mass wedding. He also took two more wives for himself.

The Macedonian army resented Alexander’s attempt to change their culture, and many mutinied. But after Alexander took a firm stand and replaced Macedonian officers and troops with Persians, his army-backed down. To further diffusion the situation, Alexander returned their titles hosted a huge reconciliation banquet.

Many conquered lands retained the Greek influence Alexander introduced, and several cities he founded remain important cultural centres even today. The period of history from his death to 31 BC, when his empire folded, would come to be known as the Hellenistic period. Alexander the Great is revered as the most powerful and influential leaders in the ancient world ever produced. 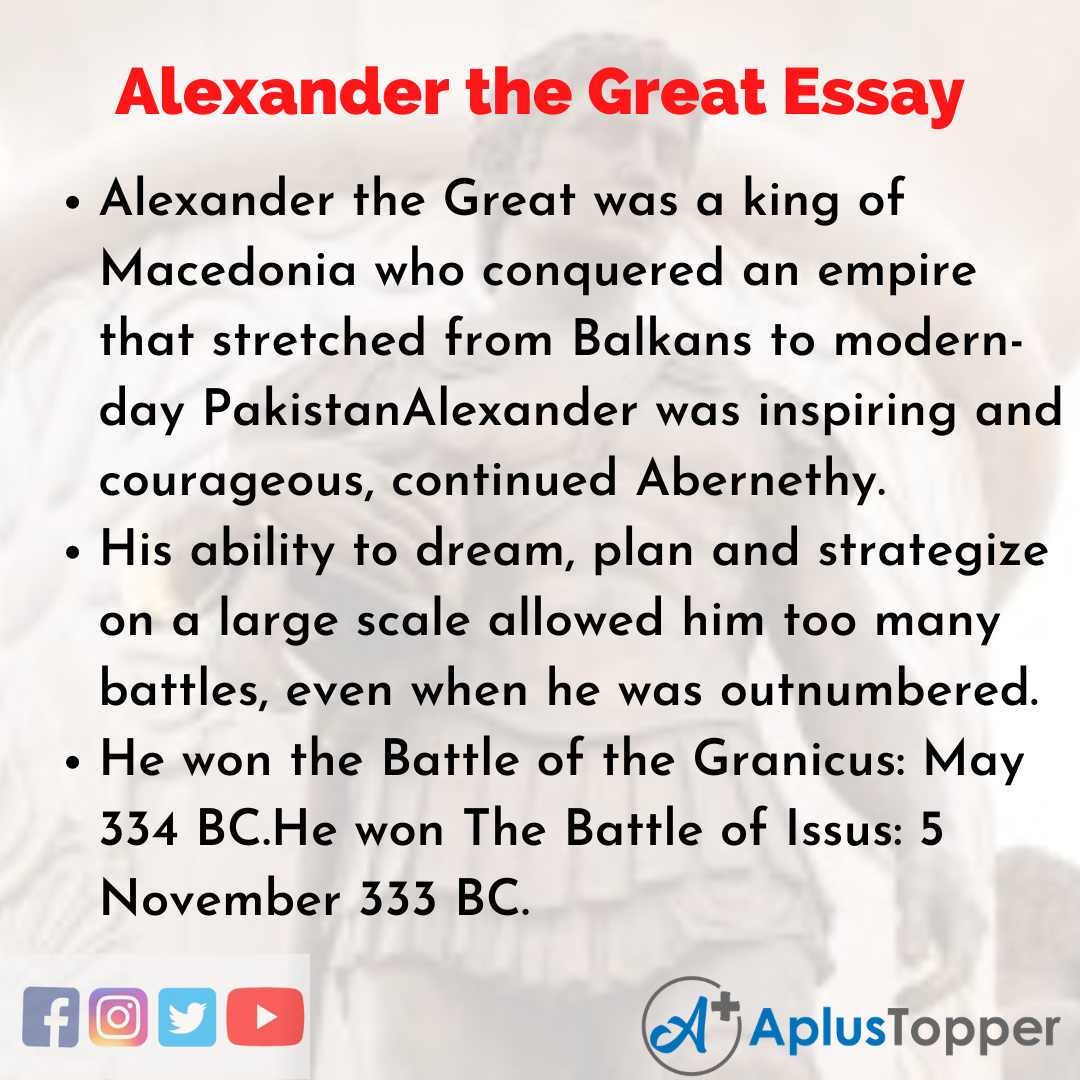 Short Essay on Alexander the Great 150 Words in English

In 334 BC Alexander III of Macedon better known as Alexander the Great set out on his grand campaign of conquest against the Persian Achaemenid Empire, aged just 22. Benefitting from the conquests, diplomacy and military reforms of his father, Philip II, Alexander has inherited a powerful professional army that utilized the Phalanx formation.

He would go on to forge one of the largest empires the world had yet seen, conquering the mighty Persian Empire and marching his army as far as the Beas River in India. Alexander won four victories against the Persians: the Battle of the Granicus: May 334 BC, The Battle of Issus: 5 November 333 BC, The Battle of Gaugamela: 1 October 331 BC, The Battle of the Persian Gate: 20 January 330 BC. His ability to dream, plan and strategize on a large scale allowed him too many battles, even when he was outnumbered.

10 Lines on Alexander the Great in English 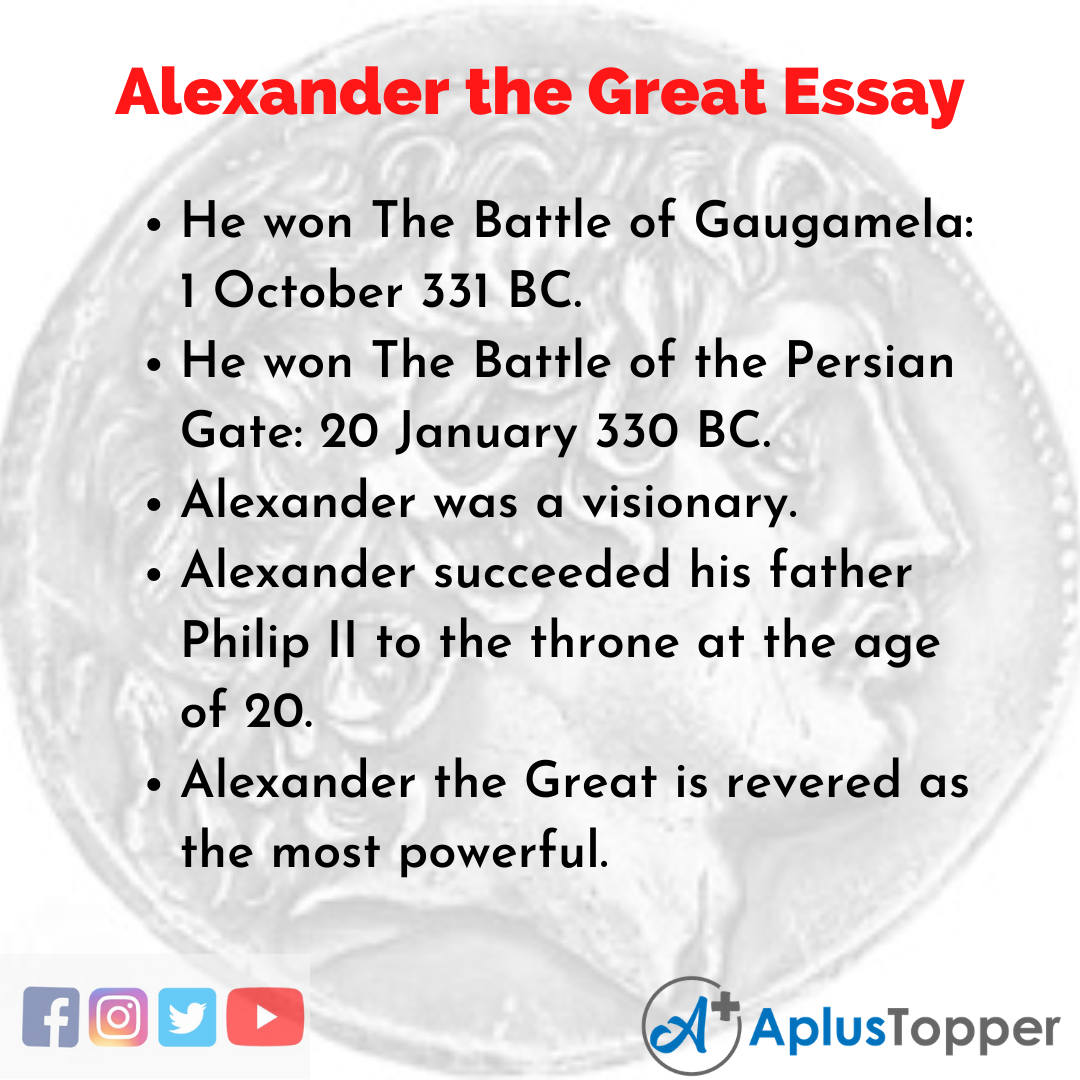 FAQ’s on Alexander the Great Essay

Question 1.
Why Alexander the Great famous?

Answer:
Alexander changed the course of history. He created a vast empire that stretched from Macedonia to Egypt.

Question 2.
How did Alexander the Great die?

Answer:
Alexander became ill after a prolonged banquet and drinking. He was thought that he either contracted malaria or typhoid fever or that he was poisoned.

Question 3.
Who defeated Alexander the Great?

Answer:
King Porus defeated Alexander the Greta in the Battle of Hydaspes.

Question 4.
What countries did Alexander the Great conquer?