What Is Agriculture And What Are Agricultural Practices

Growing plants and rearing animals for food, clothing, and other useful products is called agriculture. Plants of the same kind grown on a large scale for food, clothing, etc., are called crops. For example, several plants of maize grown in a large field form a crop of maize. Examples of food crops are cereals (e.g., rice, wheat, and maize), pulses (e.g., urad, arhar, and mung bean), fruits (e.g., mango, apple, and banana), and vegetables (e.g., spinach, potato, and onion).

Based on the growing season, the crops grown in India can be classified as kharif and rabi. Kharif crops are generally planted in June and harvested in October. Rice, maize, cotton, and groundnut are examples of kharif crops.
Rabi crops are generally planted in November and harvested in April. Wheat, barley, pea, and gram are examples of rabi crops.

For growing crops, farmers perform a series of activities, in a particular sequence, over a period of time. These activities are known as agricultural practices.
The major steps involved in this process are- 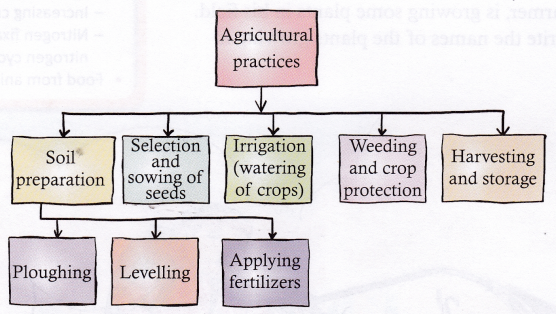 Soil is the main medium in which plants grow. Roots of plants absorb water, air, and vital nutrients from soil. In order to ensure that these are readily available to the roots, the soil is ‘prepared’ before growing a crop. Soil preparation involves ploughing, levelling, and applying fertilizers.

Ploughing   The process of loosening and turning the soil is called ploughing or tilling. This process is important because of the following reasons.

Organisms like earthworms also help in ‘ploughing’ the field, as their burrowing action helps in loosening and turning the soil. These organisms also help in the decay of dead plants and animals in the soil. This process leads to the formation of a substance called humus, which is rich in nutrients for plants.

Soil is ploughed with the help of a tool called plough. Plough and other tools needed for large-scale production of crops are called agricultural implements. Ploughs are drawn either by bullocks or other animals like horses and camels or through a tractor. A plough can be made of wood or iron.

Nowadays, implements called cultivators, which are driven by tractors, are increasingly being used for ploughing. This saves both time and effort.

Levelling   Even after ploughing, big lumps of soil (called crumbs) may remain in the field. These are crushed using wooden or iron planks called levellers and this process is called levelling.

Applying fertilizers   When crops are grown in a field, they absorb nutrients from the soil. After growing many crops in the same field, the level of nutrients in the soil may decrease as they are being used up by the crops. Eventually, the soil may even turn infertile (i.e., not allow growth of crops at all). To avoid this situation, farmers often add substances called fertilizers to the soil. Fertilizers are natural or chemical substances that contain one or more nutrients essential for plant growth. Fertilizers can be natural or chemical.

Chemical fertilizers may get washed into water bodies through a process called leaching and harm fish and other aquatic animals. Their overuse should, therefore, be avoided.

Selection and Sowing of Seeds

Selecting good-quality, healthy seeds is the next important part of crop production. In India, a government body called the National Seeds Corporation (NSC) is involved in the production of good quality agricultural seeds. NSC has also helped in setting up seed-testing laboratories in different parts of the country.

Aim: To separate healthy grains from unhealthy ones
Materials needed: A beaker or glass bowl, water, and wheat grains
Method:

After the seeds have been selected, they need to be sown in the field. Sowing is the process of placing seeds in the soil. The following points must be kept in mind while sowing seeds. Seeds should be sown at appropriate distance from one another. Overcrowding may result in competition for air, sunlight, and nutrients among the young plants that emerge from these seeds. Such competition is harmful for the young growing plants. Seeds should be sown at the correct depth, neither too shallow nor too deep. Sowing can be done manually (i.e., by hand) or with the help of an implement called seed drill.

Manual sowing   This process (also called broadcasting) involves direct sprinkling of seeds into the soil. Seeds sown in this manner are distributed unevenly (which may result in overcrowding). Also, this method may not ensure that all seeds are sown at the correct depth.

Seeds sown in the soil require water for their growth. Water requirements differ from crop to crop. For instance, paddy needs a constant supply of water whereas wheat requires water at regular intervals. Rainfall is one of the sources of water for crops. As one cannot always depend on rainfall, other ways of supplying water to crops have been devised. Irrigation refers to artificial application of water to the soil for assisting the growth of crops.
Water for irrigation is obtained from wells, rivers, lakes, reservoirs, and tube wells. Methods of irrigation can be considered under two broad categories: traditional and modern.

Modern methods: Sprinkler irrigation and drip irrigation are examples of modern methods of irrigation. These methods help in saving water. Care must be taken not to water the field excessively. Excess water on the field may cause a condition called waterlogging, which may harm the crops by decreasing the amount of air available to the roots and leading to an increase in the salt content of the soil.

Sometimes, undesirable plants called weeds grow along with the crop. Amaranthus (chaulai), wild oat, grass, and Chenopodium (bathua) are examples of weeds. Weeds need to be removed as they start competing with the crops for air, sunlight, and nutrients. Some of them may even be poisonous to human beings and animals. The process of removing weeds is called weeding. Weeding can be done either manually or by using chemicals called weedicides.

Manual weeding Weeds can be uprooted either by hand or with the help of implements like harrow, trowel, and hoe.

Manual weeding has the following disadvantages.

Animals like rats and insects also damage crops. Such animals are called pests. Most pests can be destroyed by using chemicals called pesticides.
Weedicides and pesticides have the following disadvantages.

Threshing is done either manually, or with the help of a machine called thresher. A machine called combine harvester can be used for both harvesting and threshing. Winnowing, which involves the separation of the grain from chaff (seed coverings and tiny pieces of leaves or stem), can be done manually, or using a winnowing machine.

Harvested grains need to be stored before they are made available for consumption. To prevent their spoilage, it is necessary to ensure that both the grains and the storage area are free of moisture. The grains are dried in the sun to remove as much moisture as possible. They are then weighed and packed in gunny bags or bins. Bulk storage of grains is done in granaries and silos.

The storage area should be kept clean and dry. Pesticides should be sprayed beforehand to keep away pests. Periodic inspection of the storage area is necessary to ensure the safety of grains.