Advertisement Slogans: Advertisement is a form of notice that tries to promote a particular service, or product, or even an event. It is a flyer that helps in propagating a concept or belief. Most of the companies that want to promote their product they resort to circulating advertisements.

There are several forms of advertisements that various companies use. There is online advertising, some use the radio, a few promotions take place through theatre ads, print media is another type, but the online type is most commonly used nowadays mostly social media.

Slogans on Advertisement in English

Once upon a time, television ads were the most popular. This took place in the pre-internet times, and the first TV ad came in America. TV ads in those times used to portray their products with the help of eye-catching characters.

With the development of the internet, hand advertisements have modified, but many ways have come up for blocking ads too. The public must know what ads are for, and slogans are best ways to depict that. 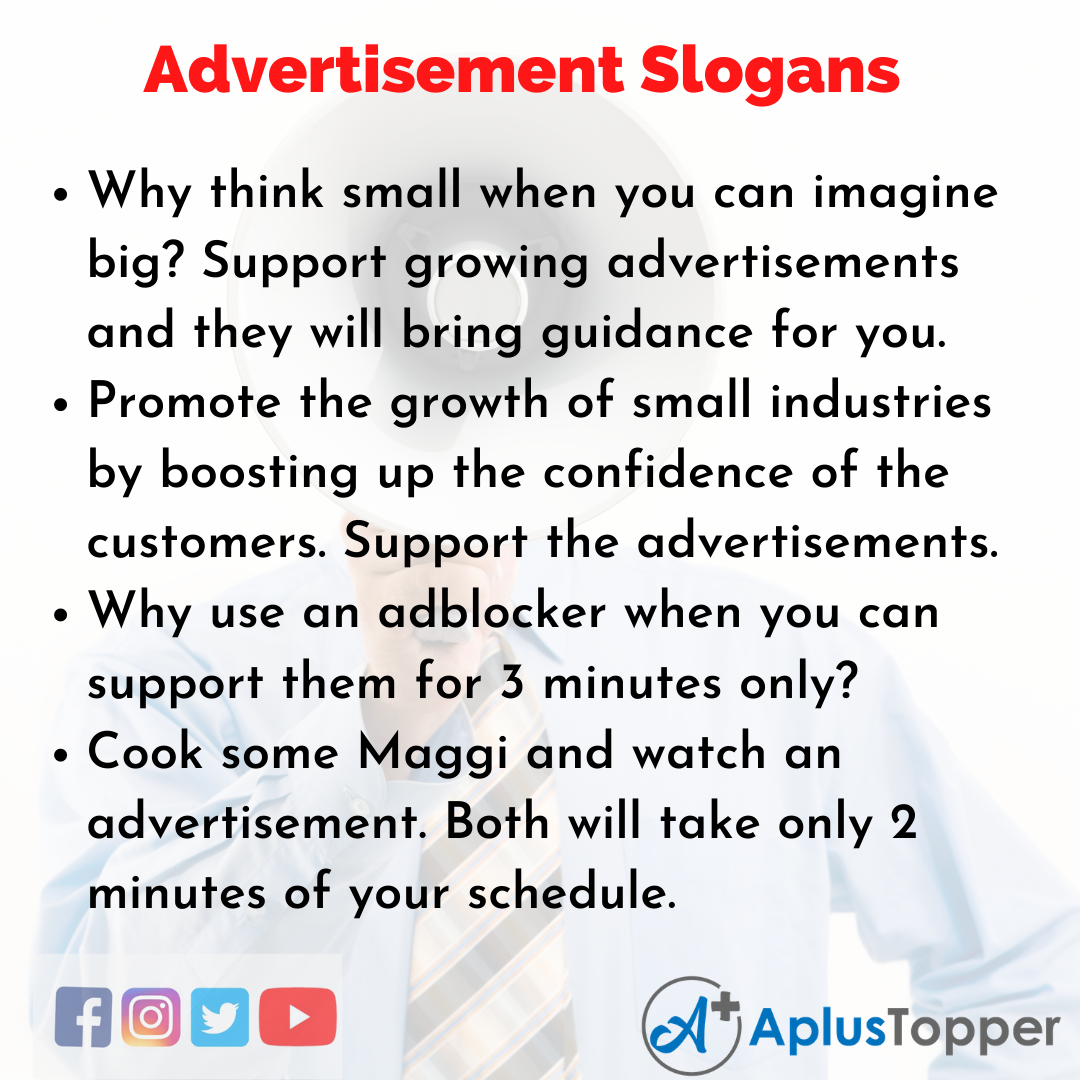 15 Unique and Catchy Slogans on Advertisement

1. Why think small when you can imagine big? Support growing advertisements and they will bring guidance for you.
2. Promote the growth of small industries by boosting up the confidence of the customers. Support the advertisements.
3. Why use an adblocker when you can support them for 3 minutes only?
4. Cook some Maggi and watch an advertisement. Both will take only 2 minutes of your schedule.
5. Advertisements have an aim to build relations between customers and the company. Why not venture in something new?
6. The ads get depressed when you skip it. Think different and watch them. Who knows that new information you might come across.
7. Will you feel good when another person ignores you? Why ignore advertisements and make them feel sad?
8. In five minutes you can make a cup of coffee, you can make noodles twice, and you can also watch an advertisement.
9. Speed is injurious to health—both in drive and in the watch. Do not speed up advertisements and try a taste of it.
10. Advertisements can change your mood from the monotonous web series. Take a break with an advertisement and some KitKat.
11. Advertisements help in the growth of a company. Can we give at least two minutes of our time to support that growth, right?
12. A good advertisement is something which once you get the hang of, you will always want more of it.
13. A quirky advertisement lights up your life like the crackers in Diwali. It will cheer you up and lighten your mood.
14. If a company can work for us, provide us with our essentials, then can we not support it a little? Advertisements are essential too.
15. How much time does your tea break take? 5 minutes? So does our advertisement. Enjoy both.

Question 1.
What is the importance of advertisements?

Answer:
A proper advertisement is always beneficial for the company it is being portrayed for. For the launching of a new product, a good advertisement is always needed. It helps in boosting the goodwill of the customers and attracting new customers too. Some advertisements also look forward to educating and propagate messages for a targeted audience. Such topics usually include family planning, drug abuse, abortion of girl child, etc.

Question 2.
Are advertisements good or bad?

Answer:
The approach to this question can be taken in two ways, in the sense of audience, and the sense of business. Concerning business, it is profitable, as it makes sure that people are encouraged to buy the product. The quality of it, its content, determines whether the advertisement is good or bad. The response to a particular advertisement can be very different in different groups of people. For instance, some audience may respond well to an advertisement for family planning in a positive way, but some orthodox audience might take it negatively.

Question 3.
What do we need to keep in mind while designing an advertisement?

Answer:
The first thing that we need to keep in mind is competition. For one particular commodity, several brands are coming up with an array of advertisements, so the content has to be good enough to compete for that. It needs some extra features that need showing off. Exaggerating in this field will create no harm. Please make use of the right words for it. Instead of a single person narrative, it is often seen that advertisements with an interactive tone often have better reception among the audience.