Advantages and Disadvantages of Wave Energy: Wave energy or wave power is the transportation and capturing of energy by ocean surface waves. The energy captured is then used for every kind of valuable work, including electricity generation, water desalination, and water pumping. Wave energy is one form of renewable energy and is the most extensively estimated global resource form of ocean energy.

Wave energy is produced when the wind blows over open water and creates waves. The energy produced and caught up in that waterpower is enormous. Even though wave energy has proved challenging to harness effectively and economically, the world is suddenly looking at wave power as a viable option and source for our ever-increasing energy needs.

It is a renewable form of energy derived from the waves as they move across the water. Wave energy gets produced when electricity generators are placed on the surface of the ocean. The factors determining the energy output are wave height, wave speed, wavelength, and water density.

Wave energy can be harnessed in several different ways. Still, the approach generally depends on the condition and structure of the body of water where the wave energy is being sourced. Although many methods of harnessing wave power have been developed, there are three primary forms used today – Oscillating Water Columns (OWCs), Surface-Following Attenuators (Line Absorbers), and Buoyancy Unit/Point Absorbers. All three methods involve equipment that floats at the surface (or just below the surface) of the water, with additional equipment below the water that converts the force and power of the waves into electricity. 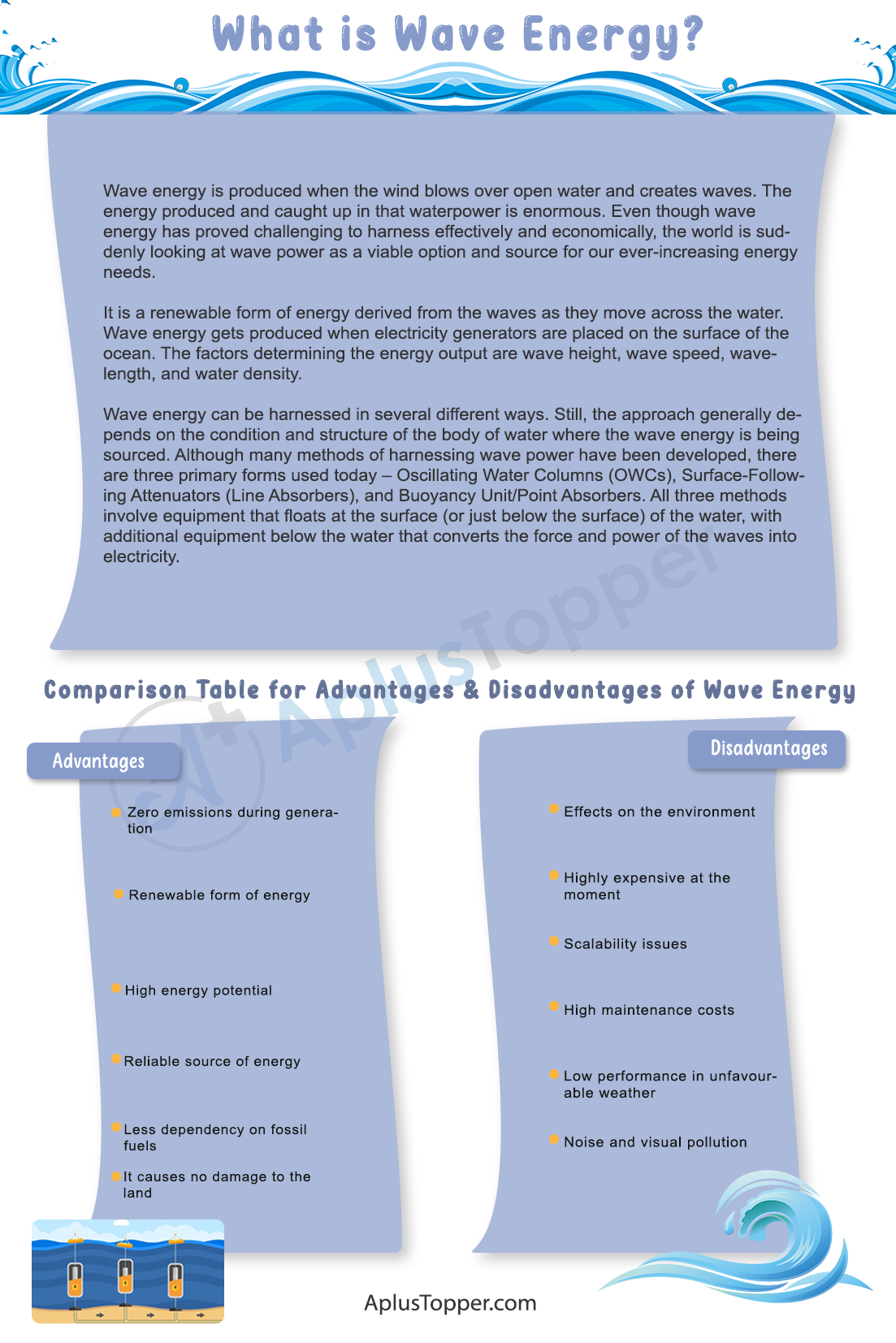 The advantages of using wave energy as a source of energy are listed below:

Besides the good advantages of wave energy, it has few disadvantages, which are listed below: 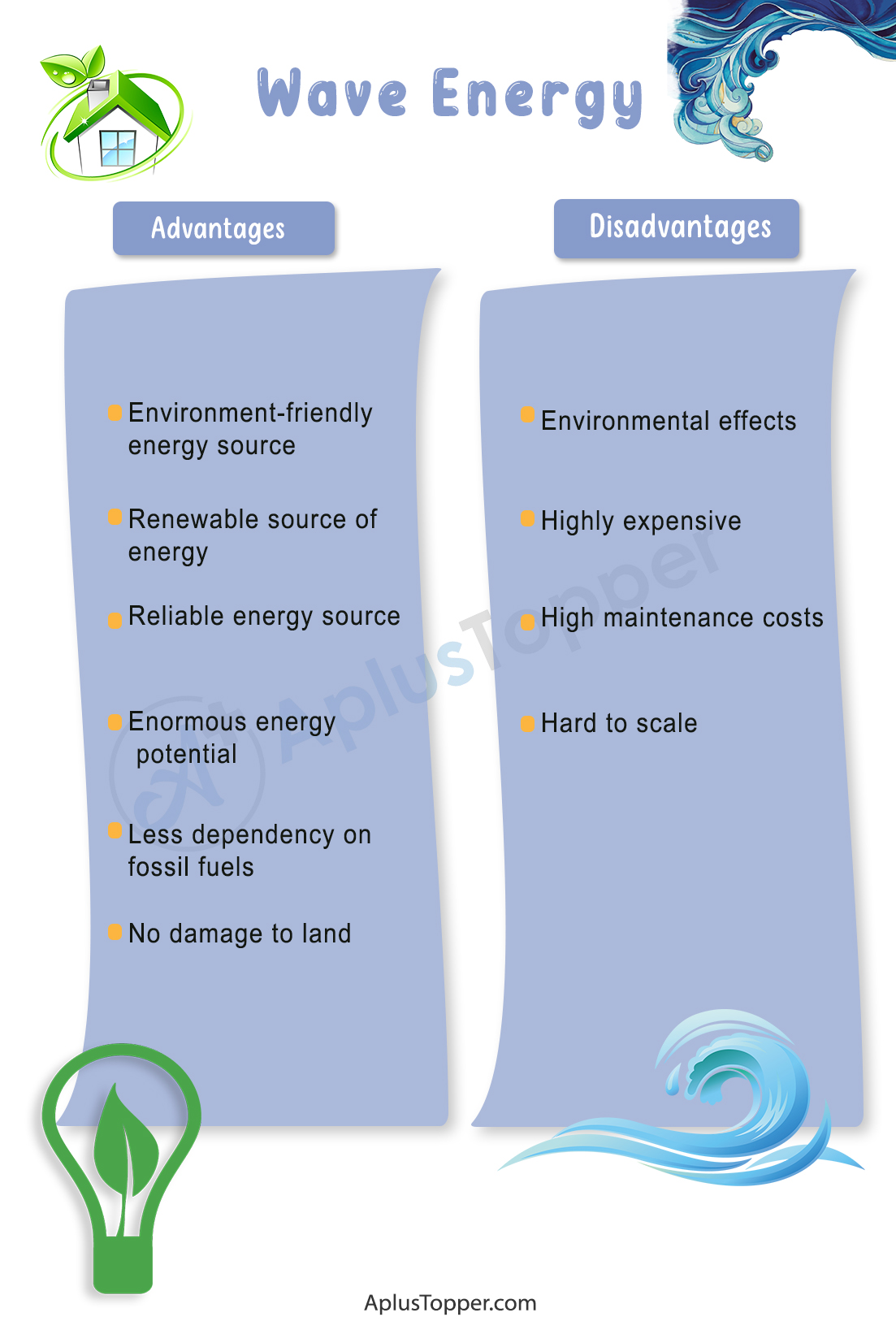 Wave Energy is a growing industry, although just emerging. It is clean, renewable, and environmentally friendly. Wave energy absorbers can absorb much more energy than solar or wind power per square foot, and they do so with considerably less cost to the environment. Every year new technology is developed, and with 75% of the world population projected to live within 40 miles of the coast by 2025, the ocean is the most viable and accessible energy source we possess.

But the disadvantages and drawbacks mentioned earlier in this article make us think twice before choosing to use this energy. However, with the development in science and technology, these drawbacks can certainly be solved, and we can opt for wave energy as an alternative source of energy due to its numerous advantages.

Answer:
Wave energy is consistent and better at producing energy than other sources dependent on the wind or sun. A wave farm refers to the instruments placed in the high seas to successfully utilize wave power and adapt it to wave energy.

Question 2.
What is the cost of wave energy?

Answer:
According to The World Renewable Energy Report, wave energy is estimated at an average of 9 cents/kWh and tidal and current at 8 cents/kWh average.

Question 3.
Is wave energy good for the environment?

Answer:
Wave Energy is perceived as a non-polluting and renewable source of energy. These renewable energy sources are also important because they reduce our dependence on carbon-based fossil fuels, enhance energy efficiency, and reduce harmful greenhouse gas emissions.