Advantages And Disadvantages Of Friction: Friction is the force acting between two surfaces. It is a resistance that acts between two moving objects resisting motion.

Friction is essential for offering traction, which facilitates motion. All vehicles depend upon friction for speeding up, slowing down, and even for changing directions.

Our day-to-day activities, like walking to your favorite bookstore to piling dishes on top of each other, friction is what makes all that possible. Burning meteors before they hit the earth’s surface and causing forest fires, friction can have many forms.

But as you all know, anything good cannot exist without some bad. The same is the case with friction. Doing some basic things in our day-to-day life would not be possible without friction, but it comes with lots of disadvantages. Friction is a necessary evil, and you can’t expect to go a day without having some friction encounter.

Let’s discuss some advantages and disadvantages of friction here.

Walking is such an ordinary day-to-day activity that no one gives a second thought about it. A static frictional force acts when a person is walking. Frictional force offers you the ability to walk without sliding.

When you try to walk, your foot pushes against the ground, and without the frictional force acting, you would slide backward. Friction pushes your foot in the direction you are trying to walk and thus helps you move in the forward direction.

You must have noticed how walking on ice, wet or muddy surfaces gets complicated, and you may even slide if not careful. It is because there is less frictional force between the surface and your feet.

Piling objects on top of each other is a great way to store things without taking too much ground space. But have you ever wondered how things stay on top of each other without falling? Between the surfaces of the two objects, there is a friction force acting which resists the sliding of the objects and thus makes piling things possible.

You can’t imagine keeping every dish you own lined up separately, and that is made possible because of friction.

The frictional force is responsible for stopping moving vehicles. Whenever you apply brakes on a vehicle, the friction causes the vehicle to slow down and eventually come to a stop.

Riding a vehicle to work, movies, grocery stores is a common thing to do. If you have ridden or driven a car, you know how important brakes are. Braking in a vehicle either slows down the speed or completely stops it.

Whenever you apply brakes on your vehicle, your car’s brake pads come in contact with your car’s brake discs, and this causes a frictional force between the discs and pads. The friction also generates heat energy and resists the wheels’ motion which eventually brings the velocity down to a lower speed or zero, which slows down or stops the vehicle.

Lights Up A Fire:

Even today, we use a matchstick to light up a fire by rubbing the tip of the match stick on the red stripe on the side of the matchbox. The rubbing leads to friction that creates heat that starts a series of reactions which leads to fire.

Writing is such a common thing to do. Frictional force assists you in writing on a paper or a board using a pencil, pen, or chalk. While looking from a naked eye, the surface of paper or a board seems smooth when rough.

If there is very low or no friction, we can not write using our regular pens and pencils. Have you ever observed how hard it is to write on a plastic sheet or a glass slab due to the absence of friction?

Wearing accessories like caps, rings, or belts is a part of our attire. Whenever you wear any accessories, it has to cling to you for it to stay on your body. Without using adhesives, it is made possible due to frictional force. Without the frictional force between the hat or ring and your body, they will slide off.

People with lower eyesight wear glasses. The glasses stay on the top of your nose because of the frictional force.

Gripping On To Things:

Every time you go out, you take multiple things, like your keys and phone wallets. Holding all these things in your hands is possible due to friction.

Imagine waking up someday and realizing you cannot hold onto things, and they keep slipping off your hands. When you hold something into your hand, the frictional force acts between your hands and the object, which resists slipping.

The frictional force acting between two surfaces generates heat. This phenomenon is used in several machines like a spin welding machine which requires heating. We often rub our hands whenever we feel cold. The rubbing of palms causes friction, and that generates heat which causes our hands to heat up.

Often we hear news of a meteor shower visible in the sky. Meteors are rocks that are from space that enter the earth’s atmosphere.

The meteors enter the earth’s atmosphere, and due to the gravitational force, they start falling toward the ground with speed. This speed results in a significant amount of friction between the air and the meteoroid.

Energy is something that is never lost, only transformed from one form to another. It is the case with friction. The frictional force acting between two surfaces causes heat. The two surfaces in motion have kinetic energy, and some of that energy is transformed into heat energy. It results in the loss of kinetic energy, and that slows down the momentum of the objects.

Two objects rubbing against one another, then frictional force acts between them. The frictional force is the resistance of motion between two objects. It works in the opposite direction of movement and makes it difficult to slide one thing off another. If no friction sliding off, any object would not require much effort, no matter how heavy the object is.

The frictional force decreases the lifetime of moving machinery parts. When two parts of a machine are constantly rubbing against each other, it can quickly wear the parts.

The frictional force between two surfaces generates heat. Machines with moving parts are in friction, and operating them for long times can cause overheating. Overheating of machinery parts results in energy loss or has a risk of damaging the machine.

Forest fires occur naturally and cause a significant loss of wildlife and plantation. It also increases carbon emission and thus, in turn, aids global warming. Most of the time, a forest fire is caused by natural reasons. The trees and plantations are dried, and a high-velocity wind blows through them, causing the tree branches to rub against each other. It causes friction between them, which generates heat and eventually catches fire.

Constant friction leads to the wear and tear of objects and reduces their lifetime significantly. Things wearing down will need replacement, and that adds to the economic cost. If there were no frictional force acting upon objects, they wouldn’t wear down quickly.

Frictional force results in decreased efficiency of machines. The efficiency of a machine is calculated in how efficiently it can converse energy.

Friction causes the transformation of mechanical energy to heat, which can not be converted back, which leads to wastage. The constant friction also leads to the wear and tear of objects. The energy consumption is also increased due to friction.

Moving machinery parts like a door on a hinge create unnecessary noise if not greased properly. If two rough surfaces are rubbed against each other, they produce noise. This noise is caused due to friction, and it results in noise pollution. 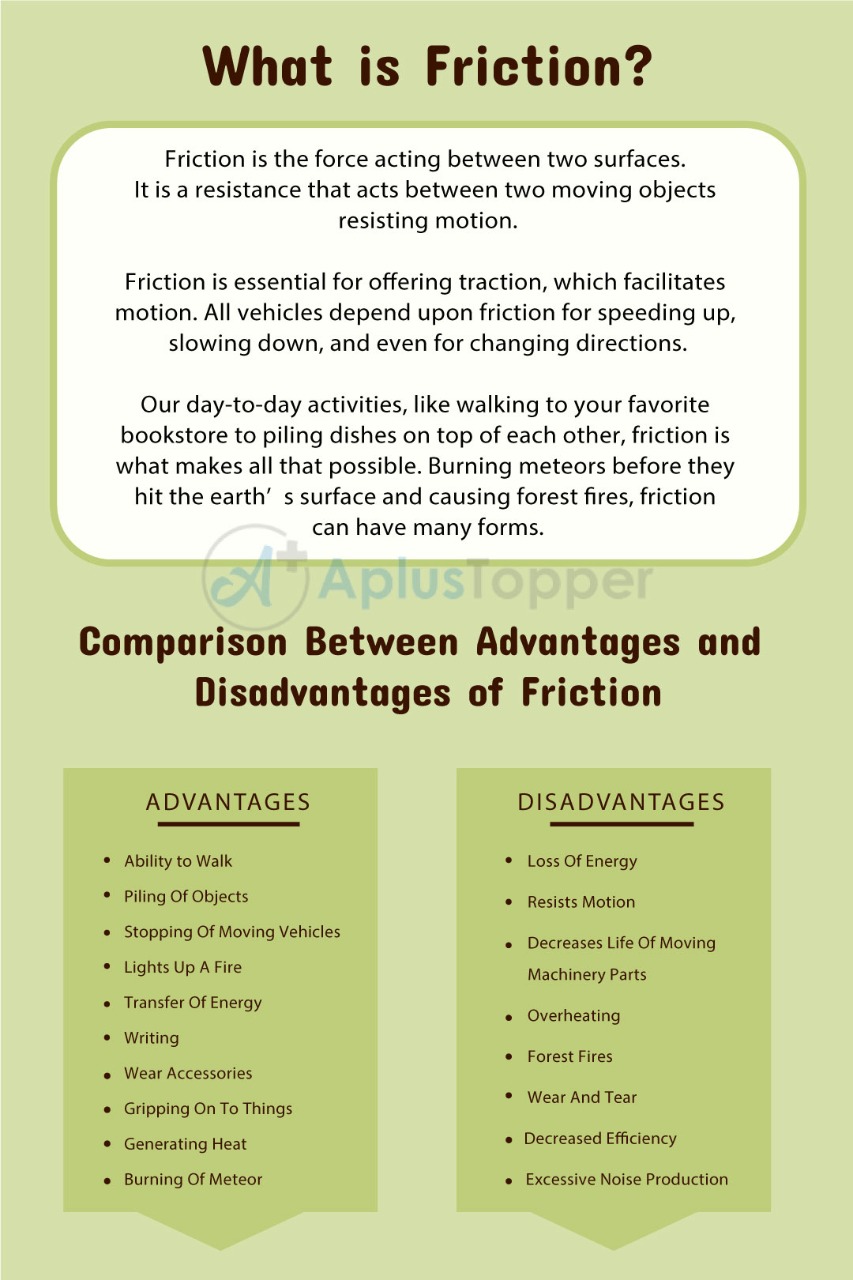 Conclusion on Advantages And Disadvantages Of Friction

The Frictional force is a necessity for completing even our day-to-day work. We need friction to perform our basic tasks like walking, writing, or even holding things. However, the friction also leads to wear and tear of machines and other objects, and the replacement is costly. It also leads to loss of energy by generating heat. Friction is a necessary evil that we have to endure.