Advantages and Disadvantages of Cell Phones: Cell phones are a staple of modern life, with such ubiquitous reach that it would be impossible to not have one in your pocket or handbag. But how does this affect us? Cell phones have been around for a while, but now more and more people are getting smartphones. It’s a difficult choice as some people like the convenience of a cell phone and others are forced to use it as the times have changed.

However, a cell phone is more than just a phone. It also functions as a computer, an MP3 player, a camera, a timer and even a game console. However, it is so much more than that and over the last few decades, cell phones have completely changed the way we live our lives. In this article, we shall explore the advantages and disadvantages of cell phones.

Cell phones are a powerful tool for communication, sending and receiving information. Cell phones allow people to store music, keep in contact with friends and family, play games, surf the internet, and so much more. Cell phones can also be helpful if you have an emergency but they can also cause problems when used irresponsibly. Cell phones have become very popular in recent years, due to their convenience, modern features and the way they can integrate with social media. While cell phones can be helpful, they must be used properly in order to avoid problems. When people misuse their cell phones, they are creating unwanted stress and causing serious health risks. 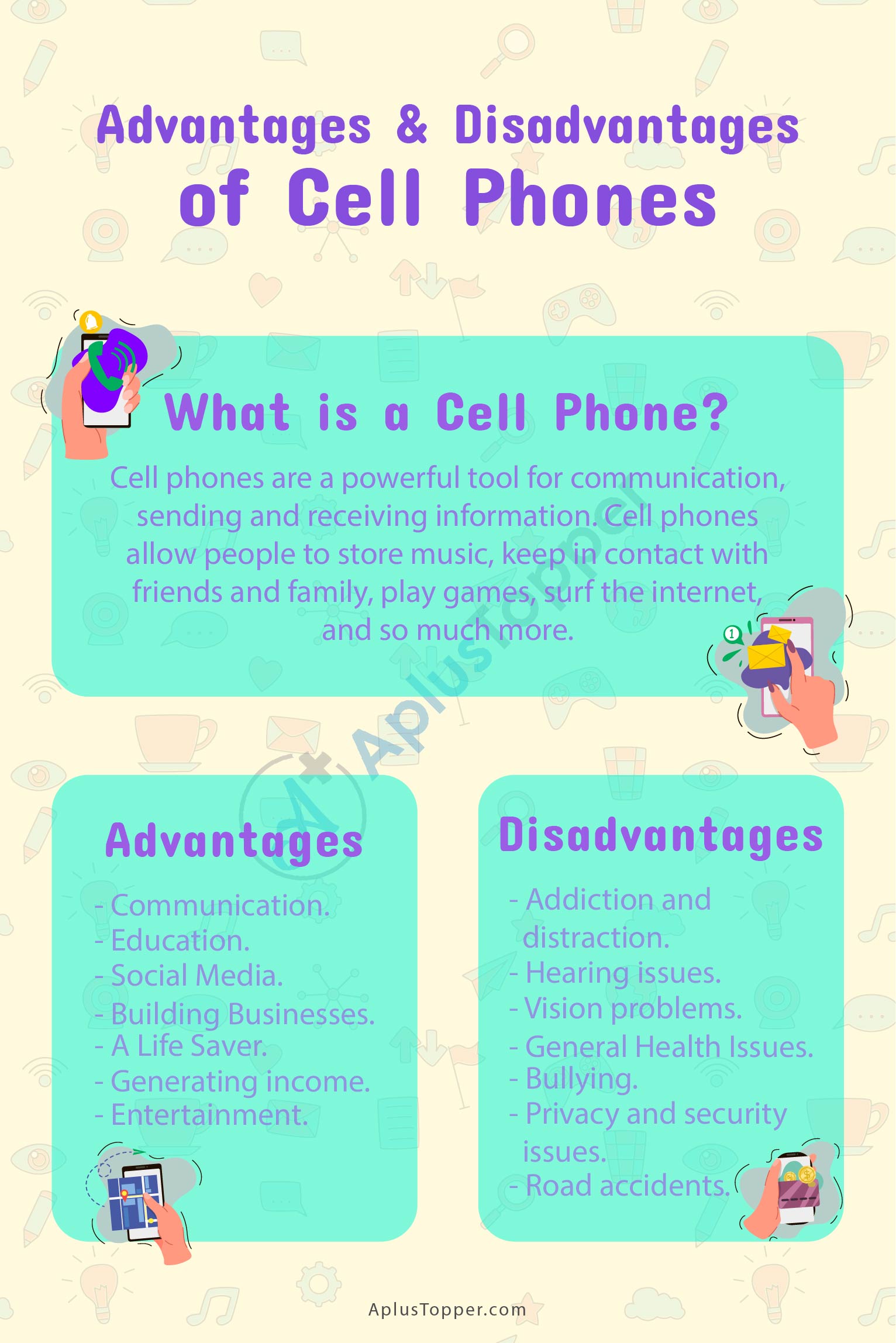 The use of a smartphone has many positive aspects. They are not only good for convenience, but also provide information such as maps without the need to look up directions. It is easy to download and store music or videos on your phone. It has many other features as well like being a camera, tablet, and a handy flashlight. In other words, smartphones offer many conveniences and often make life easier. They are no longer just devices for communication.

For instance, smartphones are seen as an entertainment device, able to stream, play and listen to anything you like. As technology advances, the smartphone will only continue to rise in popularity. The following points summaries the advantages of a cell phone in more detail:

As we are already aware, smartphones are a big part of society today. People often depend on them for the day-to-day tasks that they need to do like work, school, or leisure. On the other hand, there are also some disadvantages associated with owning a cell phone – and these include loss of privacy when your phone is stolen or hacked. Cell phones can also lead to addiction because many apps and games are designed to keep users engaged.

For instance, PUBG  is an extremely popular mobile game and has caused many kids to be extremely addicted. In addition, smartphones can also disrupt sleep, which can have very detrimental effects on health.  The following points summaries the disadvantages of a cellphone in more detail: 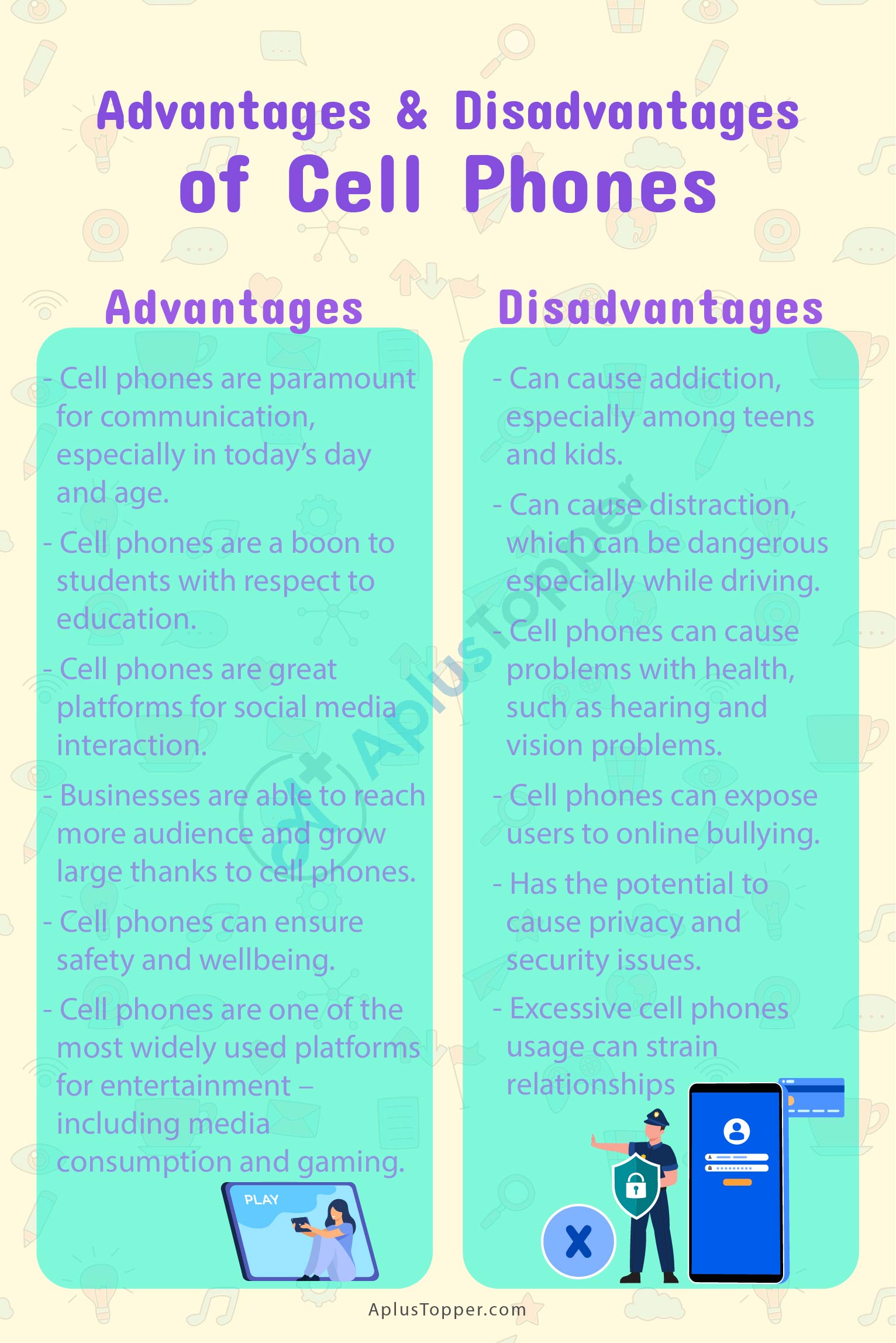 Comparison Table for Advantages and Disadvantages of Cell Phones

Following are the advantages and disadvantages of using cellphone:

Conclusion on Advantages And Disadvantages Of Cell Phones

Cell phones are one of the most important inventions in modern society. They have been providing us with a way to communicate and stay connected with others. There are many things that cell phones do well. They make it easy for us to keep up with friends, get information about our surroundings, and find out where we need to go. However, cell phones have an equally significant number of disadvantages, and some of these are more concerning than others.

FAQ’s on Advantages and Disadvantages of Cell Phones

Question 1.
What are the advantages of cell phones?

Answer:
Cell phones are an amazing resource that every individual should take advantage of. They offer a great deal of advantages and can be used in many ways. The most important advantage to cell phones is the fact that they allow you to stay connected with friends and family. Cell phones are also powerful tools for announcements and emergency calls which can help prevent an accident that might otherwise have been fatal.

Question 2.
What are the disadvantages of cell phones?

Answer:
One of the biggest disadvantages of cell phones is that it is easy to waste time. This could be detrimental to their academic / professional and social life. Cell phones can also promote a sedentary lifestyle, which can lead to many lifestyle diseases like obesity and hypertension.

Question 3.
What are the advantages of cell phones to students?

Answer:
Cell phones are an important part of students’ lives. It provides a lot of advantages that students would be hard-pressed to live without. For example, cell phones allow students to stay connected with friends and family, participate in class through video calls, and access required information.

Question 4.
What are the disadvantages of cell phones to students?

Answer:
Cell phones have become a staple in society, but they come with many disadvantages. One of the biggest reasons why students should not be using them is because their constant use can lead to poor grades and distraction. The constant stimulation of notifications and calls also causes a lack of focus.