The advantages of Artificial Intelligence applications are gigantic and can transform any sector of a profession.

Let’s discuss some of them: 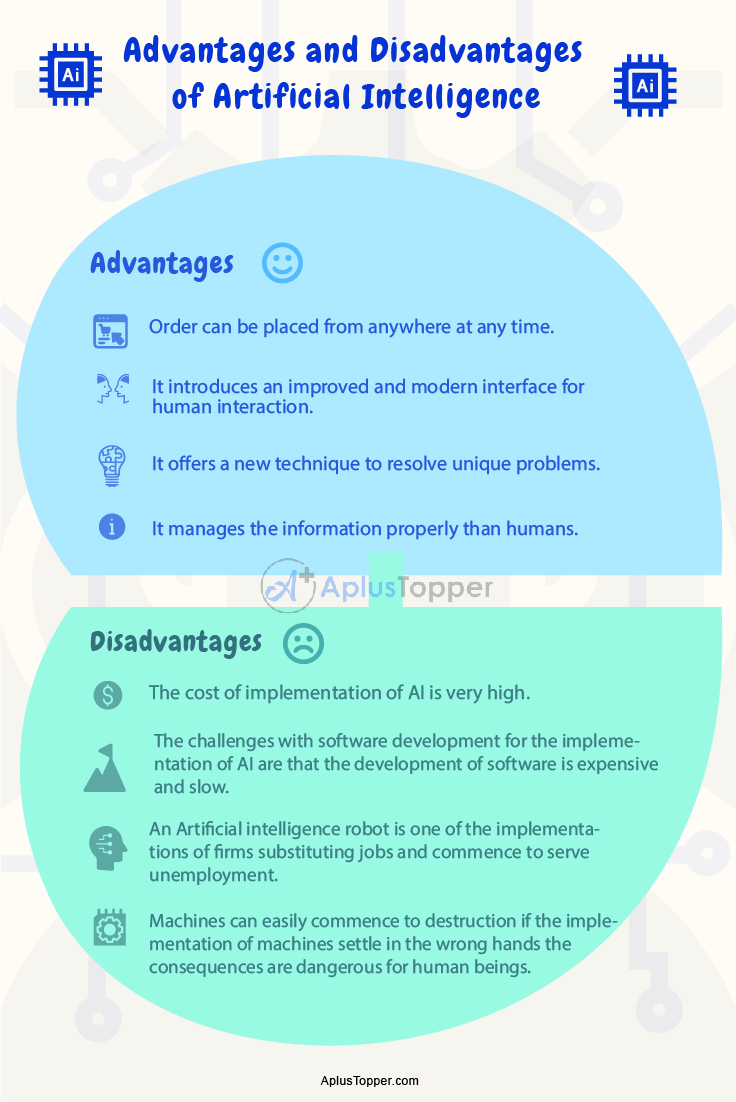 Because humans from time to time make mistakes, due to which the phrase “human error” was born. Computers, however, do not execute these mistakes if they are properly programmed. With Artificial intelligence, the decisions are obtained from the beforehand accumulated information applying a certain assortment of algorithms. So errors are decreased, and the chance of attaining accuracy with a more prominent degree of accuracy is a possibility.

Example: Using AI in Weather Forecasting, they have reduced the majority of the error caused by humans.

The technology of AI is considered one of the most significant advantages of Artificial intelligence. We can overcome many dangerous limitations of humans by developing an Artificial Intelligence Robot, which in an emergency can perform risky things for humans. Let it be travelling to Mars, explore the deepest parts of oceans, mining for coal and oil, or defusing a bomb; it can be utilised effectively in any sort of man-made or natural disaster.

Example: Have one has heard about the nuclear power plant explosion in Ukraine named Chernobyl? At that time, there were no Artificial Intelligence-powered robots that can support us to depreciate the effect of radiation by controlling the fire in the initial stages, as any human that proceeded close to the core was dead in a matter of minutes. They eventually poured boron and sand from helicopters from a small distance.

Artificial Intelligence Robots can be used in such circumstances where intervention can be dangerous.

An Average human, excluding the breaks, will work for around 4–6 hours a day. Humans are constituted in such a way to take some time out for refreshing themselves and become ready for a new day of work, and they even have weekly offed to stay unimpaired with their personal life and work-life. But using AI, people can make machines that hold the capability to work 24×7 without any breaks, and unlike humans, they don’t even get bored.

Example: Educational Institutes and Helpline centres are perceiving many issues and queries which can be handled effectively using AI.

In our day-to-day work, few people may be required to perform many works that are repetitive, like verifying certain documents for errors, sending a thanking mail, and many more tasks. Using artificial intelligence, people can productively automate these ordinary tasks and can even eliminate “boring” tasks for humans and free these people up to be increasingly creative.

Example: In banks, people often observe many verifications of documents to obtain a loan which is a monotonous task for the owner of the bank. Using Artificial Intelligence Cognitive Automation, the owner can hurry up the process of checking the documents by which both the owner and the customers will be benefited.

Few of the profoundly progressive organisations utilise digital assistants to communicate with users, which saves the necessity for human resources. Digital assistants are also utilised in many websites to implement things

that users want. People can chat with them regarding what they are looking for. Some chatbots are devised in such a system that it’s become hard to conclude that people are chatting with a human being or a chatbot.

Example: Peoples are quite aware of organisations that have a customer support team that requires to clarify the queries and doubts of the customers. Using Artificial Intelligence, organisations can set up a Chatbot or Voice bot, which can assist customers with all their inquiries. Many organisations have already commenced using them on their mobile applications as well as websites.

Using Artificial Intelligence alongside other technologies, people can take decisions faster than a human and bring out actions faster and make advanced machines.

Humans will analyse many factors both practically and emotionally before making a decision, but an Artificial Intelligence-powered machine operates on what it is programmed and presents the results more quickly. 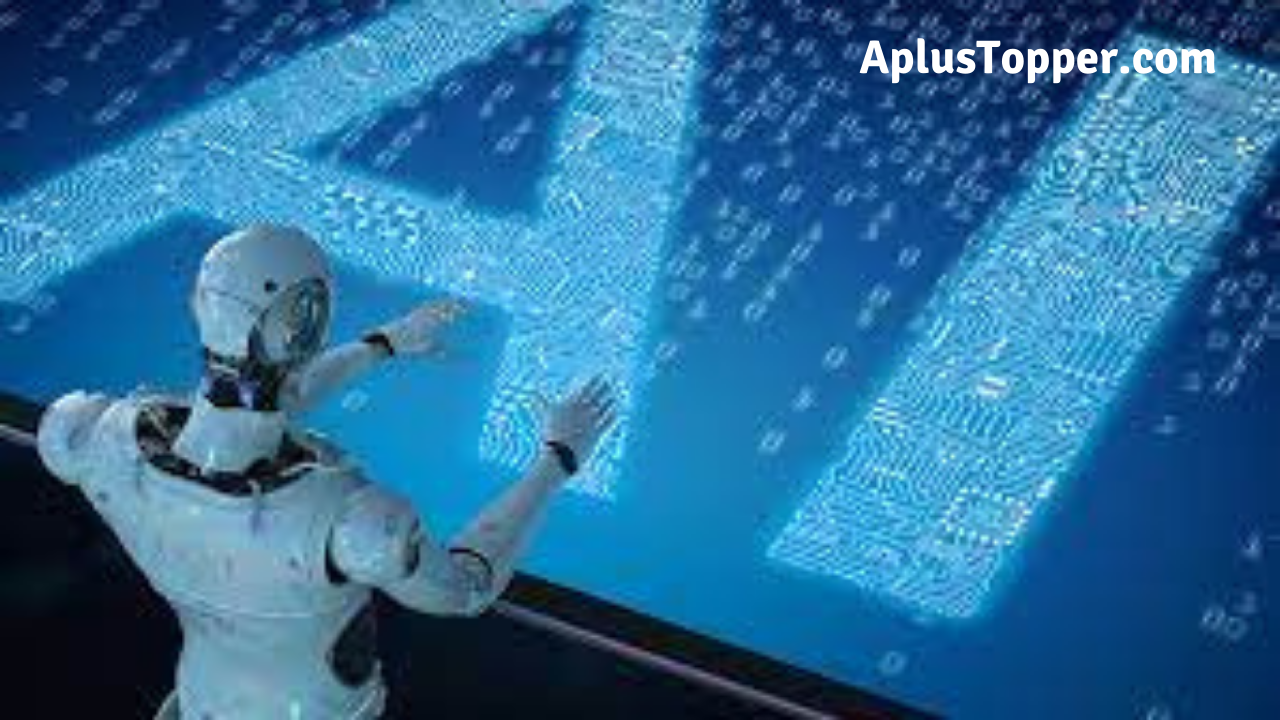 Artificial Intelligence also has few disadvantages as all bright side has a darker version present in it.

Let’s discuss a few of them.

Extraordinary Costs of Creation: As AI is modernising every day, the software and hardware necessitate getting updated with time to engage the latest requirements. Machines require maintenance and repairing, which necessitate plenty of costs. Its creation needs huge costs as they are very complicated machines.

Shaping Humans Lazy: With its automating applications in the majority of the work, AI is making humans lazy. Humans tend to become addicted to these discoveries, which can generate a problem for future generations.

Unemployment: With robots, human interference is becoming less, as Artificial Intelligence is substituting the majority of the repetitive jobs and other tasks, which will create a major problem in the standards of employment. Every organisation contemplates replacing the minimum qualified people with AI robots that can perform similar work with more increased efficiency.

No Emotions: Machines are much better when it happens to work efficiently, and there is no doubt in that, but these systems cannot substitute the human connection that performs the team. Machines cannot acquire a bond with humans, which is a necessary attribute when it comes to Team Management.

Lacking Out of Box Thinking: Machines can execute only those tasks which they are programmed or designed to do; anything out of that, they tend to give irrelevant outputs or crashes, which could be a major backdrop of an AI system.

Comparison Table for Advantages and Disadvantages of Artificial Intelligence 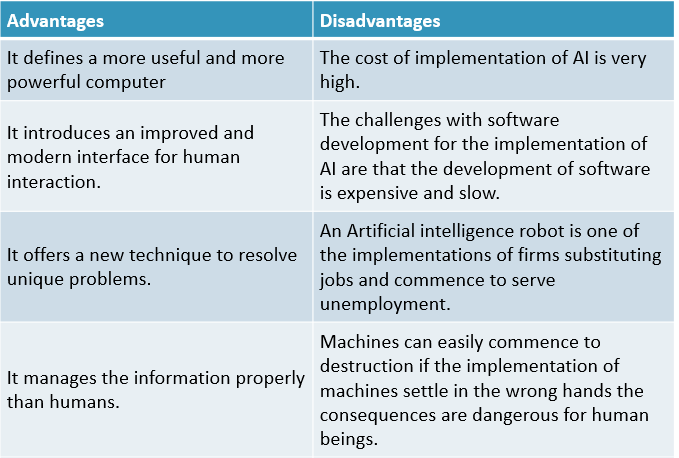 FAQ’s on Pros and Cons of Artificial Intelligence

Question 1.
What is the main advantage of AI?

Answer:
Artificial Intelligence drives down the time necessary to perform a task, facilitates multi-tasking, and lightens the workload for existing resources.

Question 2.
What are the cons of artificial intelligence?

Answer:
The cons of AI are: