Abortion Argumentative Essay: The ending of pregnancy by the removal of a fetus or an embryo is known as Abortion. Abortion is one of the most controversial topics.

When done with proper care, Abortion might be called one of the safest medical procedures. Abortion is safer than childbirth, but knowledge and awareness regarding the procedure need to be spread at a wider rate. When two people are asked about Abortion, their views completely differ from each other. Many oppose Abortion because either they are religiously bound to do so or lack knowledge regarding the said topic. When someone supports Abortion, they, by religious fanatics, are called the devil.

Long Essay on Abortion Argumentative is usually given to classes 7, 8, 9, and 10.

Abortion is what is known as ending a pregnancy by the removal of an embryo or fetus by will. In medicinal terms, Abortion is called one of the safest procedures. It is said that even, childbirth is far more dangerous than an abortion and risks the life of the mother. Hence, when done by following the rules and safety precautions, Abortion is safe and effective. However, risks sprout out when done through unsafe methods.

It is estimated that around 56 million abortions take place every year out of which 45% of the procedures follow unsafe methods. These unsafe methods are usually used when the procedure of Abortion is illegal. People have extremely opposing views when it comes to Abortion. Most people who do not support abortion base their arguments on religious terms and call themselves ‘pro life’.

In the United States of America (the land of the ‘free’) for example, Abortion is legal but might be under restraints by the respective states. One main argument that has risen with Donald Trump’s rise if the conservatives are supporting Abortion based on religious laws. They call themselves ‘pro life’ and believe that an embryo can feel emotions, and we have no right to end it’s life.

However, the republicans support Abortion and believe that it is only the mother who will decide what happens with her body. According to them, no one has the right to intervene. Above was the view of the American society, but this, in reality, represents the views of the whole world.

It is weird how most of the men are actually not in favour of Abortion, whereas they are one of the main reasons why a woman chooses Abortion. If one is not ready or stable enough to provide for the child, why bring the child into the world to make it suffer. It is the woman who, in reality, should be the only decision-maker in regards to Abortion.

The embryo or fetus in the stomach feels emotions. In contrast, none of us remembers being an embryo or a fetus, and there is absolutely no proof that they feel emotions, so why base arguments on such claims. Sex is a physical need and desire, being normal and not a sin, and it should be open and free of taboo. Promoting sex lives of humans will, in turn, promote sex education and might even reduce the rates of Abortion if people are so concerned about what others do with their bodies.

If one believes that Abortion is a sin, then one should also not view sex as a taboo. As it is the world is full of hunger, poverty, and lack of resources, overpopulation and pollution—the cause of all the mentioned above-being lack of knowledge regarding sex and taboos regarding Abortion. Although, no matter what one does to remove the taboo regarding Abortion, thought processes of certain individuals would never change. The most someone can do legalize Abortion is decrease mortality rates and to promote safe methods of Abortion. 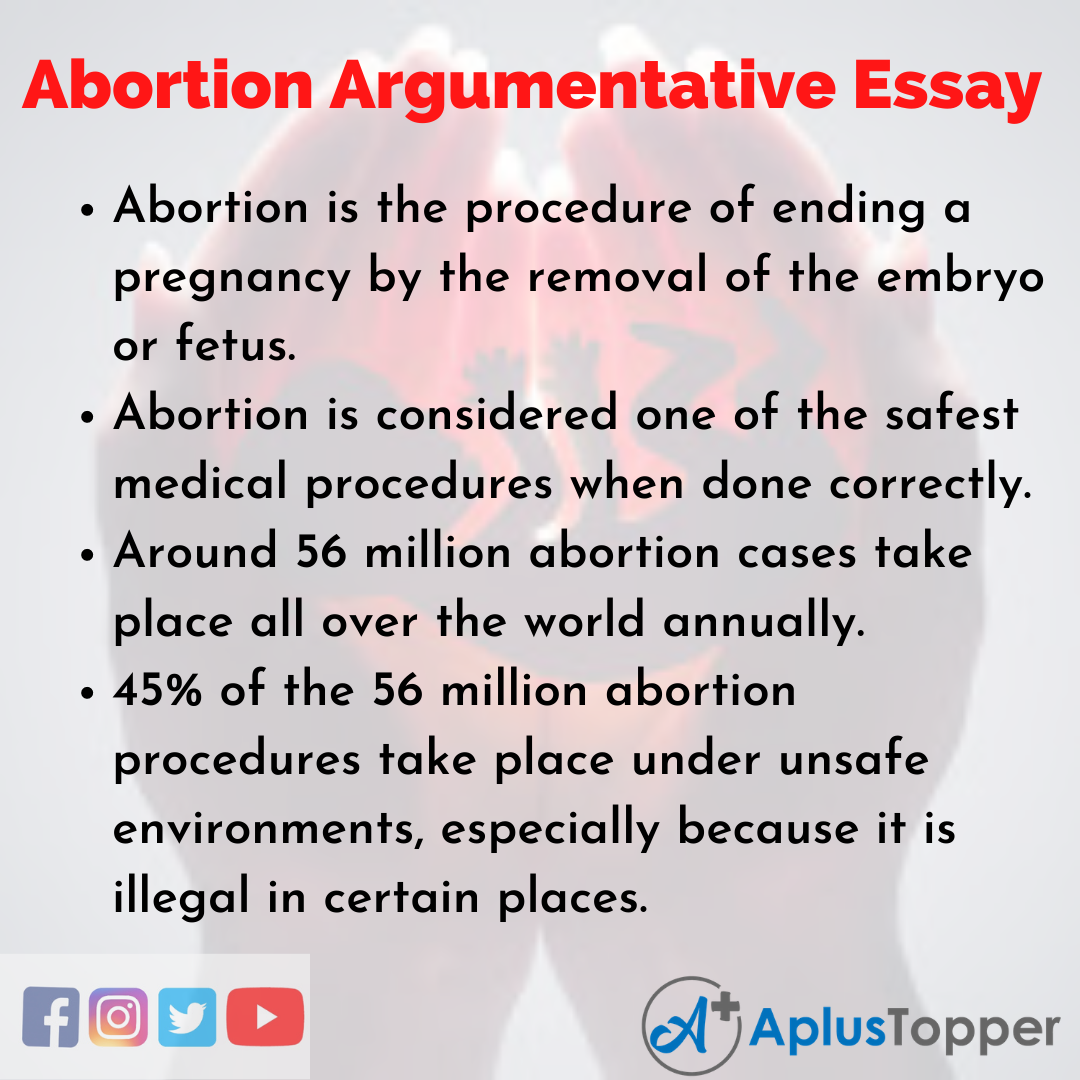 Abortion is a term everyone is familiar with. The procedure of ending a pregnancy by removing the embryo or fetus is called Abortion. If two people, randomly are asked on their views on Abortion, it is most likely that their views will defer from each other, and this represents the views of the whole world.

Some people are opposing Abortion, being called ‘pro life’ for making ‘ethical’ choice, while others are in favour of Abortion. The one’s who are against Abortion do so mainly because of religious fanaticism but under the curtain of being ‘ethical’. At the same time, those who support Abortion know that it is practical, and every woman deserves to decide what they want to do with their bodies. Education and awareness regarding Abortion are extremely crucial because some people are denied the procedure while some people fear the procedure. Once it is legal, all safety measures will be used, and the mortality will also decrease.

10 Lines on Abortion Argumentative in English 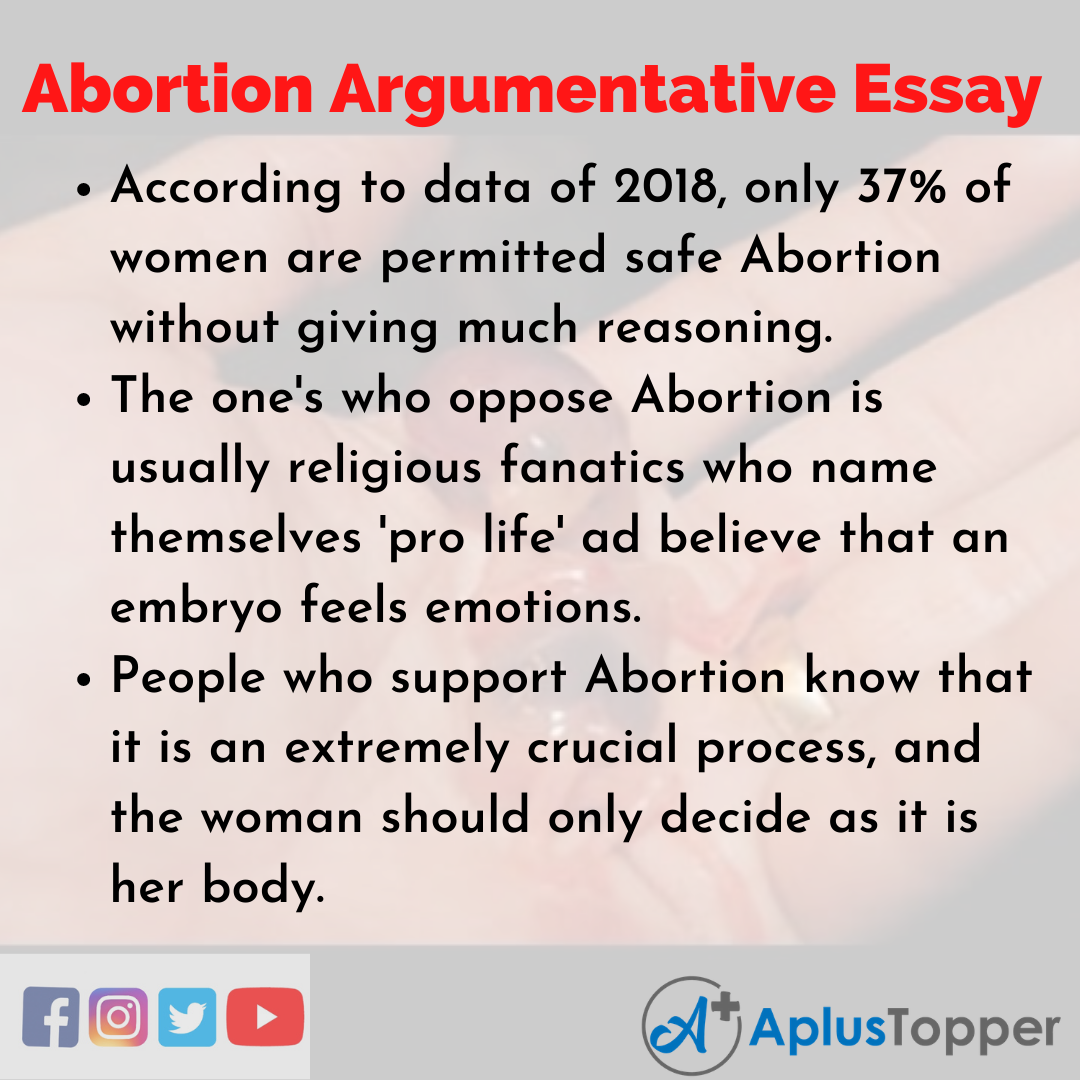 Answer:
Yes, Abortion is legal but only depending on the time of pregnancy. The answer differs from country to country.

Answer:
Yes, it is completely safe.

Question 3.
Should I abort?

Answer:
Depends on what you want. Always listen to yourself and not others.

Question 4.
How safe is Abortion?

Answer:
Abortion is safer than childbirth.