Cinema today forms one of the most important means of mass communication, instruction and a source of entertainment and amusement.

Last Sunday, I happened to visit Plaza theatre where Shaheed was being screened. As I saw the posters pasted on the wall outside the theatre, I longed to watch this movie. The posters showed Bhagat Singh in many moods, sometimes in prison and sometimes kissing the gallows. I purchased a ticket and entered the cinema hall. The entire hall was packed to its full capacity. When I entered, the newsreel was being shown. Soon the movie started.

From the very beginning to the end, the film was lively, inspiring and thought-provoking. Bhagat Singh, the great martyr of India, was shown in his most buoyant moods, performing heroic deeds and playing courageous roles. How he faced the tyranny and cruelty of the British government, is really a story of agony. But his unalloyed patriotism withstood all the cruelties and tortures of the Britishers. 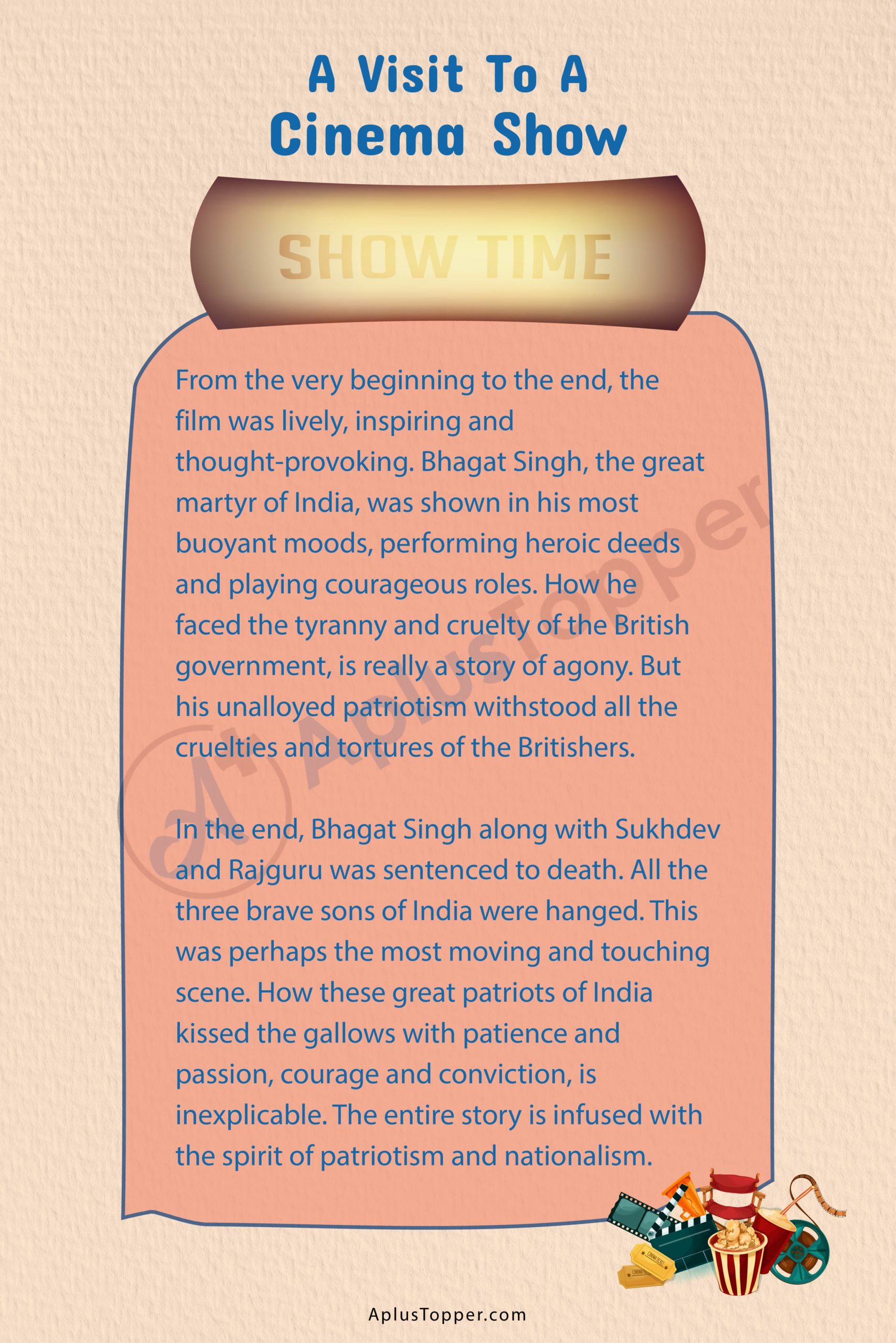 In the film, Bhagat Singh has been portrayed as a strong and staunch nationalist for whom the freedom of motherland was the mission of his life. The cruelties of the British regime were borne by Bhagat Singh and his friends, Rajguru and Sukhdev. While in prison, he was shown as a free and fearless son of India, determined to undergo all the troubles, trials and tortures, in order to liberate his motherland.

In the end, Bhagat Singh along with Sukhdev and Rajguru was sentenced to death. All the three brave sons of India were hanged. This was perhaps the most moving and touching scene. How these great patriots of India kissed the gallows with patience and passion, courage and conviction, is inexplicable. The entire story is infused with the spirit of patriotism and nationalism.

Bhagat Singh’s role is unique and marvellous. The courage and convictions of Bhagat Singh and his acts of bravery, gallantry and poise would be the most inspiring acts for the coming generations. The story, depicts the struggle of India’s Independence and the part played by Bhagat Singh in winning freedom from the British rule.

I really enjoyed the movie. The experience of watching a movie in a theatre is always a kind of refreshing joy to me.