During the rainy season, many rivers in India are full to the brim. Some of the rivers are so flooded that they create havoc. During the month of August, I happened to visit my uncle. He lives at Dhilwan, a village on the banks of the River Beas in Punjab state of India. There were torrential rains during the month because it was monsoon season. Once, it rained for thirty-six hours continuously. The villagers were at a great inconvenience due to the rains. One day, when I woke up, I heard the cries of the people. The people were crying for safety. In the meantime, I heard that the bridge on the Beas River near Dhilwan was washed away by the torrential rains.

As I was listening to the cries of the people, a farmer came and broke the news that gurgling waters of Beas river were hurtling towards their village. Soon. I saw it submerging the streets and the roads. The forceful currents of the water carried with them animals—cows, buffaloes and dogs. Many trees were uprooted and carried away by the strong currents of the water. 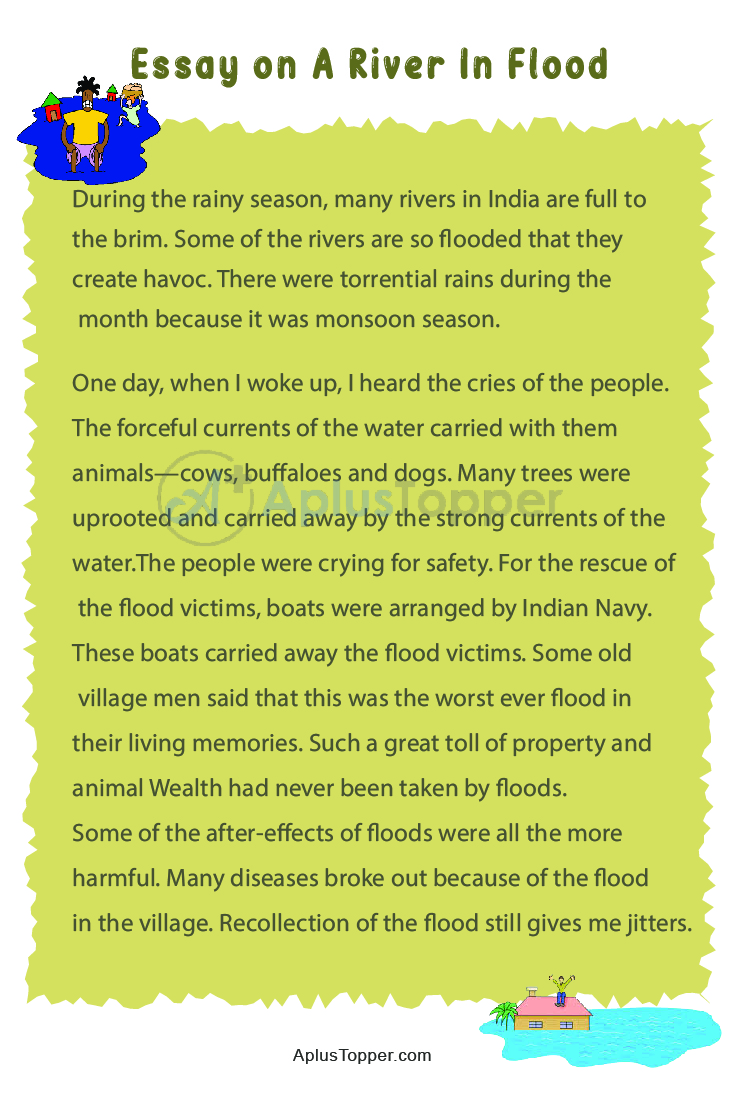 Within two hours, the flood water entered the houses. I saw from the house top that the plight of the village people was pathetic. Many houses had collapsed. Walls made up of mud were washed away by the powerful currents of water. The entire village was so flooded by the water that it appeared as if it were an island in the sea. There was water and water everywhere.

The flood caused great harm to the property and the animal life of the village. Many houses collapsed and huts were submerged. People were rendered homeless. For the rescue of the flood victims, boats were arranged by Indian Navy. These boats carried away the flood victims. Parched grams, clothes and garments were distributed by various welfare organisations as well as by the government. The people were badly harmed by this flood. Loss of life and property was worth millions of rupees.

Some old village men said that this was the worst ever flood in their living memories. Such a great toll of property and animal Wealth had never been taken by floods. Some of the after-effects of floods were all the more harmful. Many diseases broke out because of the flood in the village. Recollection of the flood still gives me jitters.