Modest Proposal Essay: “A Modest Proposal” is the shortened title of a 1729 essay by satirist Jonathan Swift, where he has given an ironical theme in which he says that the people of Ireland sell their children for food. The phrase “modest proposal” has been used to suggest something in jest to clearly point out to a problem by giving a logical point of view to it.

This essay holds up the terrible situation of poverty in the eighteenth century in Ireland. The Irish parents being so poor that they have to give up their children to survive. It takes the theme of religious prejudice, with the narrator’s assurance that Ireland eating its young will decrease the number of Roman Catholics.

We are providing essay samples to students on a long essay of 500 words and a short essay of 150 words on the topic A Modest Proposal Essay for reference.

Long Essay on A Modest Proposal Essay 500 Words in English

“A Modest Proposal For Preventing the Children of Poor People From being a Burthen to Their Parents or Country and For making them Beneficial to the Publick” is commonly referred to as “A Modest Proposal”. It is a Juvenalian Satirical essay that has been written and published by Jonathan Swift a satirist essayist in the year 1729.

Satire is a specific classification of writing that occasionally makes utilization of realistic performing expressions to scorn society into self-change. The first part of the essay explains the plight of the starving beggars of Ireland. Swift takes the readers with a surprise in the essay in its latter part.

Presented in the guise of an economic treatise, the essay reflects that Ireland ameliorates poverty by butchering the children of the Irish poor and selling them as food to the wealthy English landlords. The proposal made by the author Jonathan Swift is a savage eye-opening comment on England’s legal and economic exploitation of Ireland.

The satirical hyperbole mocked at the heartless attitude of the rich towards the poor, as well as the British policy towards Ireland. This essay is held as one of the greatest examples of sustained irony in the history of the English language. Across the country of Ireland, the poor children are living in squalor because their families are too poor to keep them fed and clothed.

Swift, argues by hard-edged economic reasoning as well as from a self-righteous moral stance finding a way to turn this problem into its solution. He proposes to flatten up these undernourished poor kids and to feed them to Ireland’s rich land-owners. It is a dark satirical solution, which would bring in profit and decrease the surplus population of Ireland.

You can now access more Essay Writing on this topic and more.

Through his proposal, Jonathan Swift had used plenty of elements to describe how the rich land-owners of Ireland should be eating the children, treating them as penniless farm animals. His proposal takes a trim describing the rich giving up their luxuries. Swift has used three techniques for his proposal, which were irony, satire and sarcasm. In the latter part of the essay, he expressed a proper proposal of taking away the rich people’s luxuries to lend a hand in the Irish economy.

In the first technique, he used irony. In reality, Swift does not consider people devouring their children because children are a sign of hope. He advises if people decide not to help out in this crisis, they should eat their children. Swift via satire shows the pain of the beggars and shows that status is everything. The sarcastic proposal of Swift has been made to belittle the attitude of the manufactured revolution that saw people as being a product to be exploited.

Swift was able to recognize a problem and was able to offer a solution to it. Using irony and sarcasm as his main tools, he was able to point out the errors of both the poor and the rich of Ireland. 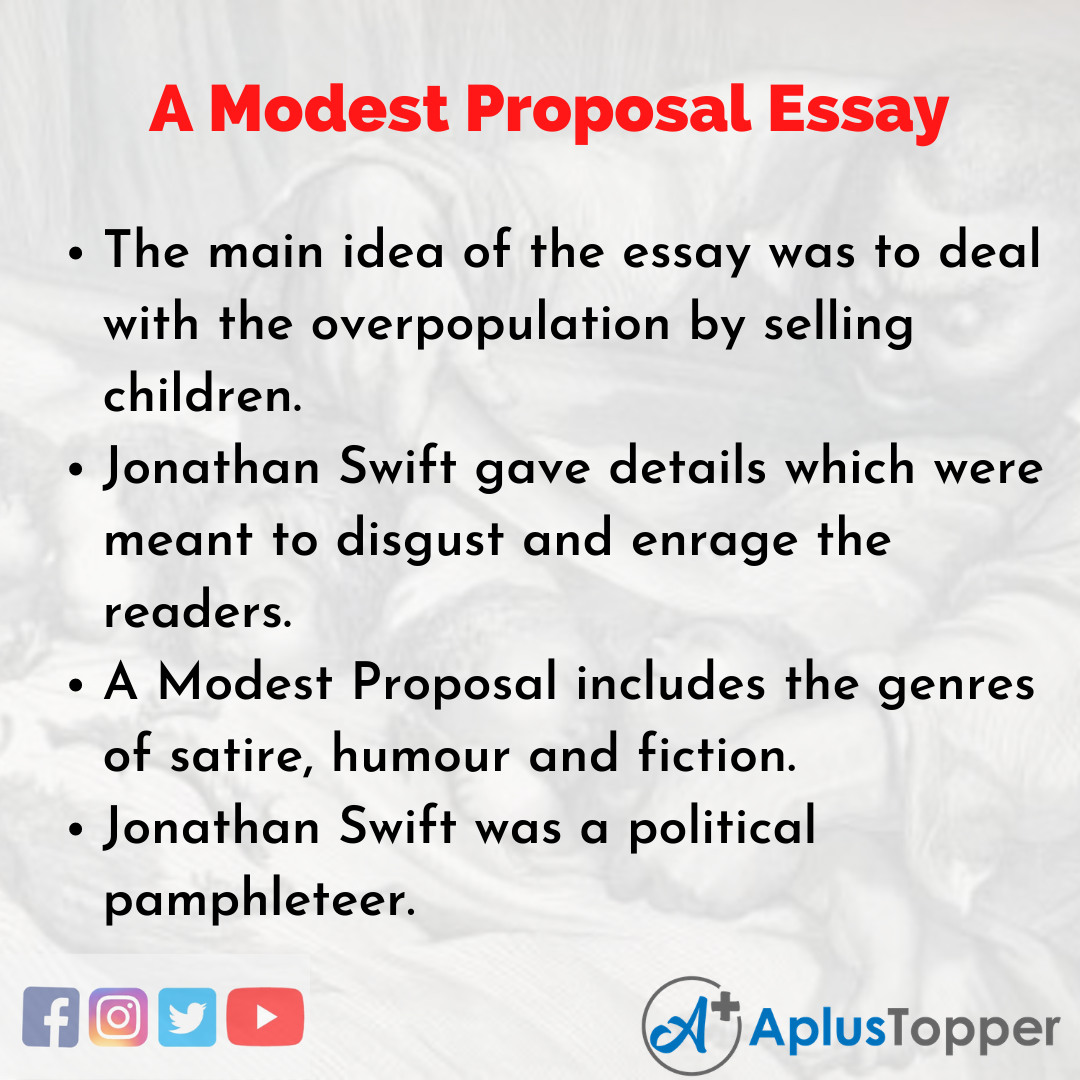 Short Essay on A Modest Proposal Essay 150 Words in English

A Modest Proposal is a satiric essay by Jonathan Swift that was published in pamphlet form in the year 1729. The essay is considered as a masterpiece of satire with a blend of natural deliberation and an unthinkable conclusion. Its title has been able to symbolize a problem that can be solved with an outrageous cure.

This masterpiece talks about how the poor of Ireland tend to survive by selling their children as food to the rich land-owners. The main basis of the argument of the mordantly ironic essay is to capture the attention of the audience by stringing a dreadful set of untenable positions.

It is a despicably, vivid satire to call for a change in the world of misfortune and abuse. Swift uses dark sarcasm as his main device to deliver a satirical impact. A turn of events with a trimming of Swift’s proposal takes place in the latter part, where his main aim was to find a solution for the ongoing crisis in Ireland.

10 Lines on A Modest Proposal Essay in English

1. The main idea of the essay was to deal with the overpopulation by selling children.
2. Jonathan Swift gave details which were meant to disgust and enrage the readers.
3. A Modest Proposal includes the genres of satire, humour and fiction.
4. Jonathan Swift was a political pamphleteer.
5. Swift was cleric, poet and the Dean of St. Patrick’s Cathedral in Dublin.
6. The phrase “A modest Proposal” is now an illusion to this style of straight-faced Satire in English writing.
7. Various authors argue that Tertullian’s Apology influenced A Modest Proposal.
8. It was originally published in the year 1729.
9. It was a response to the 1728b essay “The Generous Projector”.
10. Jonathan Swift was an Anglo-Irish satirist born on 30th November 1667. 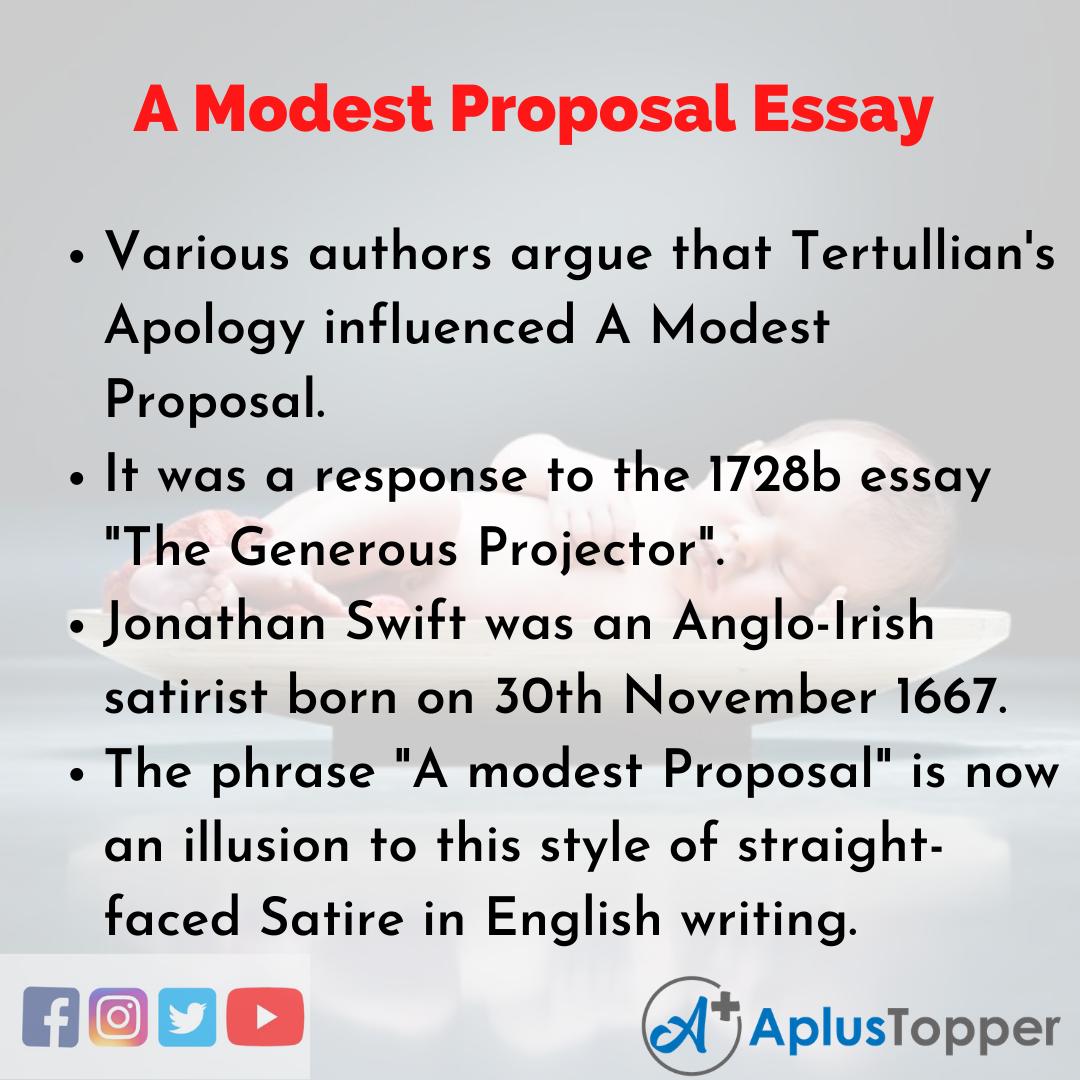 FAQ’s on A Modest Proposal Essay

Question 1.
What does satire mean?

Answer:
Satire is the use of sarcasm and humour to expose people’s mindsets and the reality of critical situations.

Question 2.
When did Jonathan Swift die?

Question 3.
Name one principal advantage of A modest Proposal.

Answer:
It would call attention to the problems that were being experienced by the Irish people.

Question 4.
What does A Modest Proposal revolve around?

Answer:
It revolves around the irony of the author, whose opinion is later understood as solutions to the ongoing problems.