The short story is a part of the anthropology of stories. It is a popular piece of literature studied and analyzed by generations. The story starts with a family going on a road trip and ends tragically with an accident and religious doctrines.

We are providing a long essay on A Good Man Is Hard To Find of 500 words and a short essay of 150 words on the same topic, and ten lines about the topic to help readers.

A good man is hard to find is a short story written by Flannery O’Conner. She was an American writer, novelist, and essayist. Her contributions to the literary world involve two novels and 32 short stories. She has also actively stated commentaries and reviews. Her writings mostly comprised of grotesque characters, violent settings, and religious doctrines. Her writings depicted her roman catholic faith and addressed the questions of ethics and morality.

A good man is hard to find was written in 1955. The short story was later published in many anthologies. The story consists of a serene scene proceeding towards a violent climax. The short story characters are seen to be questioning catholic doctrines and, in the end, evolving with a spiritual change. The story has catholic expressions related to life and death scenarios.

A good man is hard to find start with a grandma wishing to take a road trip and visit her connections. She tries to convince her son Baily of taking the trip, but he denies considering the fact that a criminal has escaped from the bars, and he is headed towards Florida. Grandma monologues on how careful she is and would never let her family and grandchildren take a perilous road. The grandchildren, on understanding her motives, convinces Baily to take the trip.

The Grandma is painted as a self-centered narcissist woman. This character and nature of her are vividly depicted at the beginning of the story. Grandma becomes the reason for the family to take a road trip; she is the first human to take her place in the car; she bring s her cat without a hint to the family and keeps talking about herself all the way. A great turning point of the story takes place when Grandma asks Bailey to take the other road because she imagined an old mansion on the road where she must find connections.

On taking the other road, the family encounters the misfit that led to a tragic climax. The cat suddenly jumps to Baily’s body, and Baily loses control over the car. This leads to the car falling into a ditch. Following this, the entire family is shot by the misfit except for Grandma. Grandma and the misfit converse on the edge of the road that is the key conversion of the story depicting a spiritual thought process.

The conversations go on to be one of the most acclaimed religious molds into literature. The misfit argues how the god was cruel to him and made his life miserable and full of suffering and wrongdoings. The Grandma tries to cast positive arguments on Christianity, knowing that the misfit will eventually shot her. At last, the Grandma yells out to the misfit that she recognizes him, and he is her son. This was a moment of Christian sympathy.

The misfit says his last words to Grandma as “She would have been a good woman if it had been somebody there to shoot her every minute of her life.” Following this, he shoots her, and the Grandma is left dead with a smile to the sky. 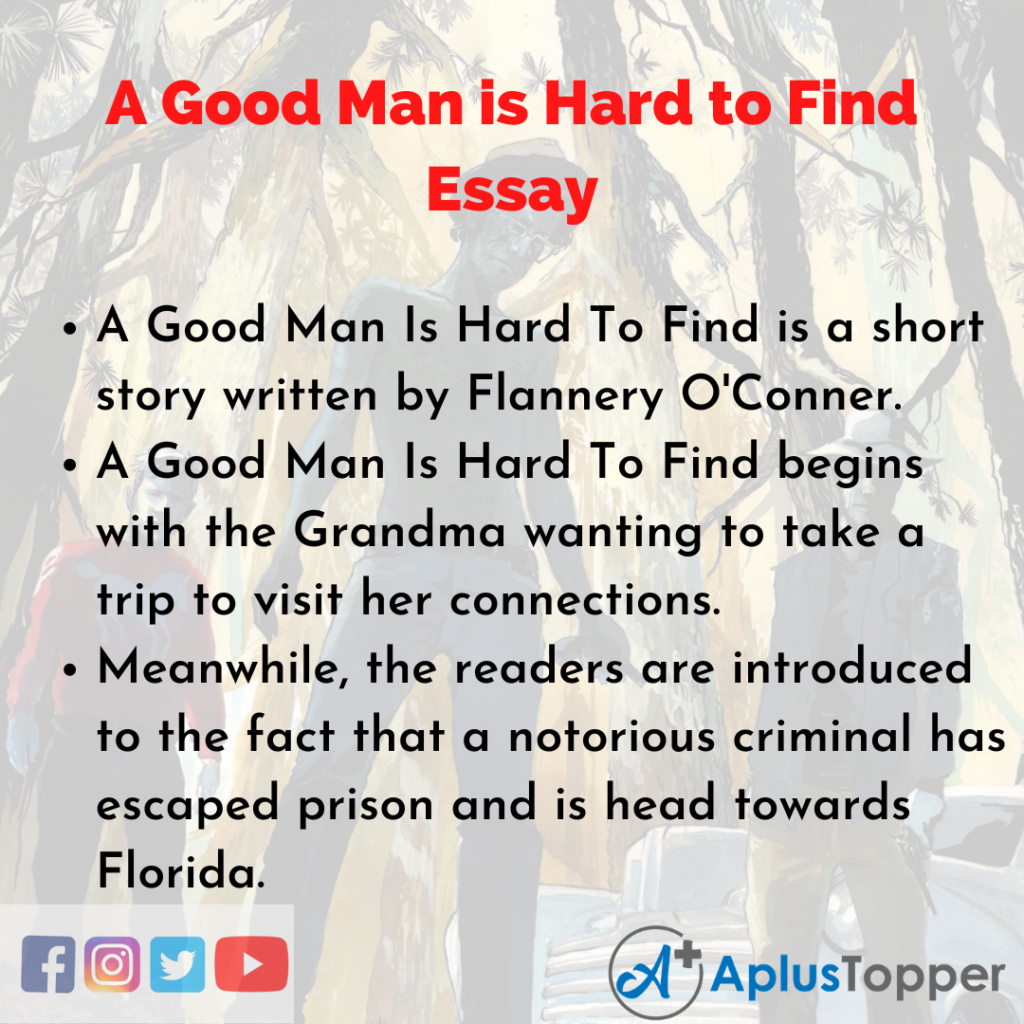 This short story begins with a narcissist grandma wanting to take a trip and visit some of her connections. In the meanwhile, the news of a misfit escaping the bars and heading towards Florida is introduced. Baily, Grandma’s son, hesitates to take the trip because of safety issues, but the children convince him. This trip evolves to be tragically ending with the misfit murdering the entire family.

The climax is very much spiritually inclined, and the readers witness an argument on catholic religion. The consequence of the story is a way for the writer to depict her religious belief.

1. A Good Man Is Hard To Find is a short story written by Flannery O’Conner.
2. The short story was issued in 1955 in anthropology.
3. A Good Man Is Hard To Find is a story based on a spiritual upbringing.
4. A Good Man Is Hard To Find begins with the Grandma wanting to take a trip to visit her connections.
5. Meanwhile, the readers are introduced to the fact that a notorious criminal has escaped prison and is head towards Florida.
6. Grandma convinces her son Baily that she will never want to put her family in danger and take the safest road.
7. Baily is finally convinced, and the family set foot on the road.
8. While driving, the family takes a different road as the Grandma has a wild imagination.
9. This leads to tragic events, and the car eventually falls into a ditch.
10. The end is marked by the murder of the entire family by the misfit. 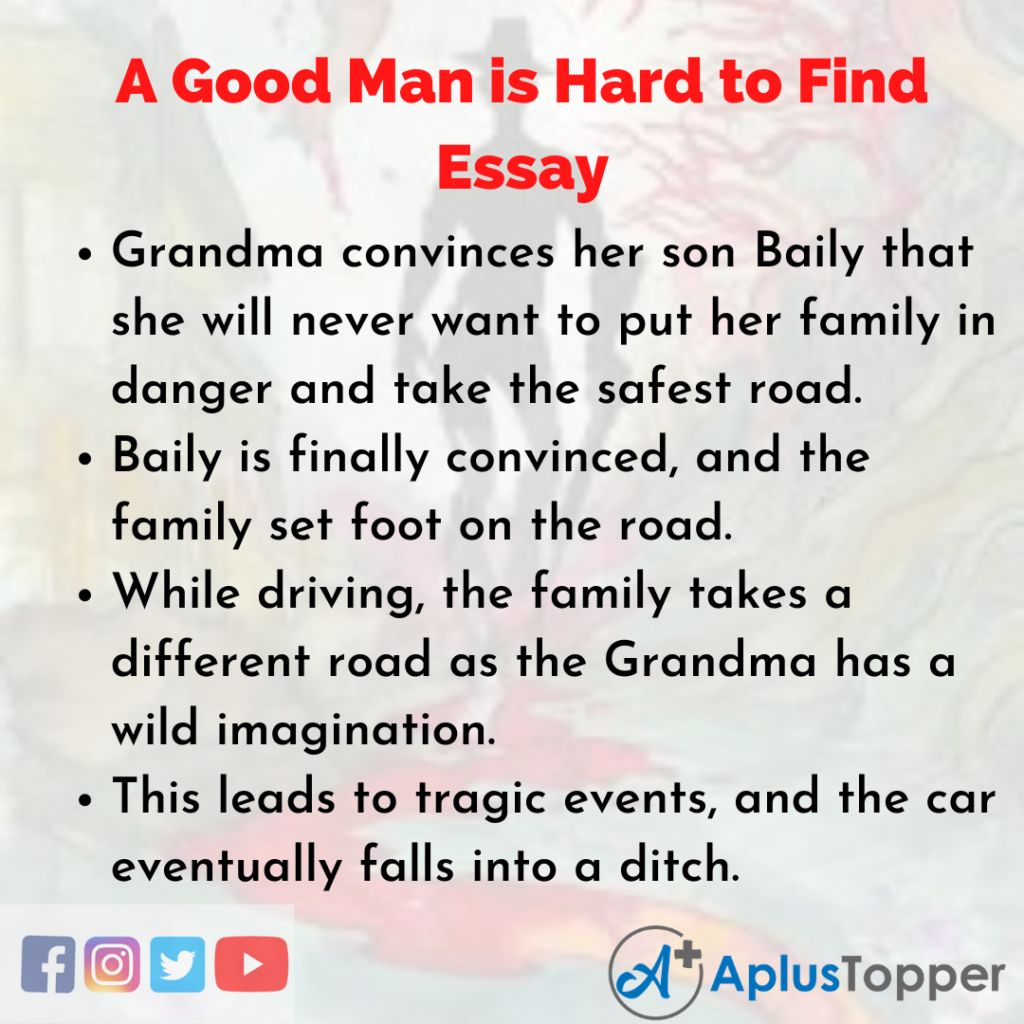 FAQ’s on A Good Man is Hard to Find Essay

Question 1.
Is A Good Man Is Hard To Find a religious piece?

Answer:
No, A Good Man Is Hard To Find is not a religious piece in particular. It has spiritual and religious inclinations as the storylines.

Question 2.
Is A Good Man Is Hard To Find based on real events?

Answer:
A Good Man Is Hard To Find is not based on real events. However, relativity to reality is a complete coincidence.

Question 3.
When was A Good Man Is Hard To Find published for the very first time?

Answer:
A Good Man Is Hard To Find was published in 1955 for the very first time.

Question 4.
What is the moral of A Good Man Is Hard To Find?

Answer:
A Good Man Is Hard To Find is a spiritually evolving story that tells the morals of Catholic doctrines.