It was the month of July. A fair was being held on the banks of the lake near my town. The lake was flooded due to heavy rains. I, along with my friends, went to see the fair as well as to bathe in the lake.

There was a great rush of people. On the banks of the lake, there were many stalls and hawkers. The bathers also kept their belongings on the bank. There was a great hustle and bustle. Many people were taking a bath in the lake. I also took off my clothes and jumped into the cool, clear water. Hardly, had I swum for a few minutes, when I heard the cries of a drowning man. I swam towards him and saw that, he was in a precarious condition.

Sometimes, he went under water while at other time he again came to the surface of the water. Many swimmers swam towards the deep waters of the lake in which the man was trapped. The drowning man was caught in a whirlpool. 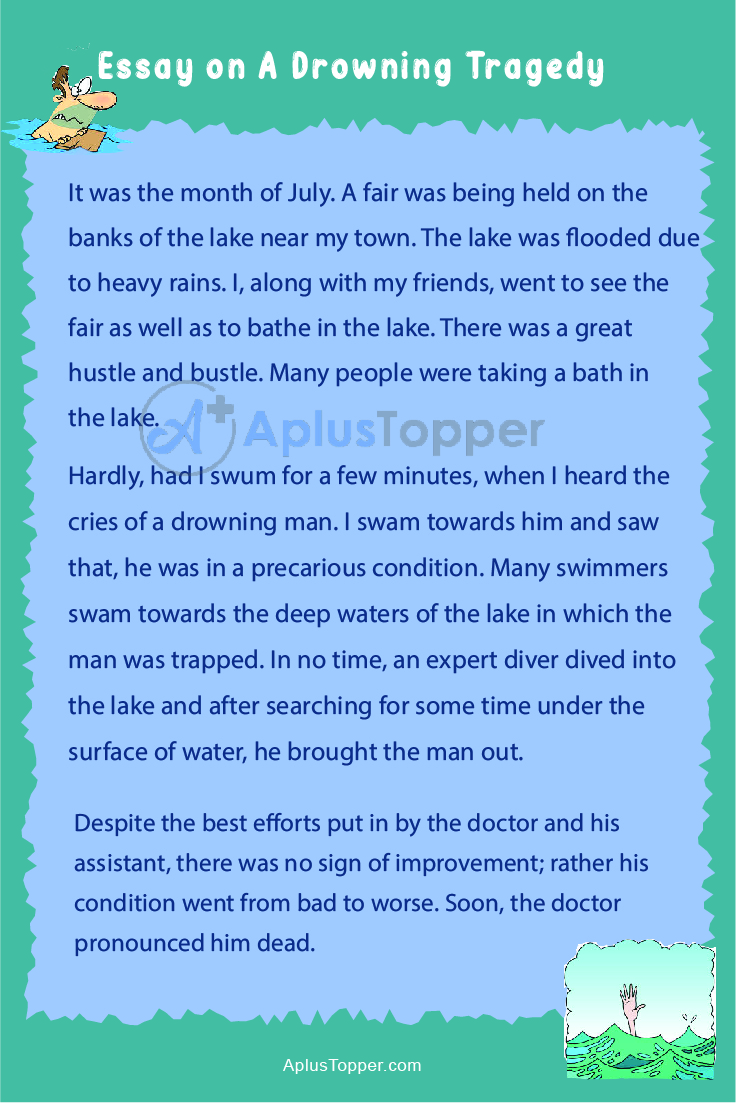 People tried their best to rescue the man but in their attempts they failed to catch hold of him. By this time, there was a huge crowd on the banks of the lake. In no time, an expert diver dived into the lake and after searching for some time under the surface of water, he brought the man out. The man was unconscious. He was made to lie on the side of the bank. He was taken to the nearby dispensary where he was given artificial respiration. Everybody was worried about him.

The parents of the man arrived in a short while. They were shocked to hear the news and burst into tears upon seeing the condition of their son. Everyone was praying to God for his life.

Even after being administered oxygen for an hour, he did not regain consciousness and there seemed to be no signs of improvement. People, friends and relatives were standing silently and solemnly, waiting for the man to recover. Despite the best efforts put in by the doctor and his assistant, there was no sign of improvement; rather his condition went from bad to worse. Soon, the doctor pronounced him dead.

Upon hearing this sad and tragic news, everyone related to the deceased cried while his parents wept bitterly. I too was shocked as I could not save the man back to life. This was the worst ever drowning tragedy that I happened to witness.