Sidney Lumet gave the direction of the film. The story of this film says that a jury of 12 men tried to cover the guilt of a person who was acquitted of a dependant basing on the reasonable doubt. The following forced the jurors to question their morals and values.

We are providing students with easy samples on a long essay of 500 words and a short essay of 150 words on the topic of “12 Angry Men” for the reference.

The essay is an abbreviation of a courtroom film which was filmed in the year 1957. Sidney Lumet directed the film. The film is about a jury of 12 jurors who had to deliberate on the outcome that a young man who is brought for the trial of his own father’s death is guilty or not. The trial at a time worsens enough to question the morals and values of the jurors.

In the United States, a group of juries are consulted for a trial. The sentence of the person over trial depends on the statements of the juries. If the majority of juries decide to give death sentence to the person on trial, then it is decided that he would be hanged till death.

The film is a collection of activities that took place in the film inside the courtroom. In the next movie, not a single character is given a name. Their numbers even identify the juries. Only the name of 2 juries is revealed at the end during a conversation taking place between them. The defendant is referred to as “the boy”.

The Foreman or the first juror in the movie is an assistant football coach outside the jury room. The second juror in the film is a shy clerk working in the bank. The 2nd juror takes some time to participate in the discussion. The 3rd juror in the movie owns a small business outside the courtroom. A group of 34 workers work under the person. The same person has a bad relationship with his son, which proves to be a contributing factor in the case against the defendant.

The fourth juror is a stockbroker outside the courtroom. The character is a serious one who deals with facts of the case logically. The fifth juror in the field works in Harlem hospital and claims that he has spent his entire life in slums due to which he has an insight of such details. The sixth juror is a painter who paints house and is happy that the case doesn’t stop because he won’t have to go to work till then. He is against the defendant in the following case. The seventh juror is also an interesting character who has nothing to do with where the case heads. He wants to leave before his ball game starts.

The eighth juror is the only juror to vote “not guilty at his first statement”. The following juror is dedicated towards the case and wants to head the caser towards the proper direction. A ninth juror is an old man who respects the views of the eighth one. The tenth juror is the one who attacks the defendant and is entirely against the defendant. The eleventh and twelfth juror is a German immigrant and marketing agency worker, respectively. The eleventh one talks about how good the American justice system is whereas the twelfth one seems distracted from the case. 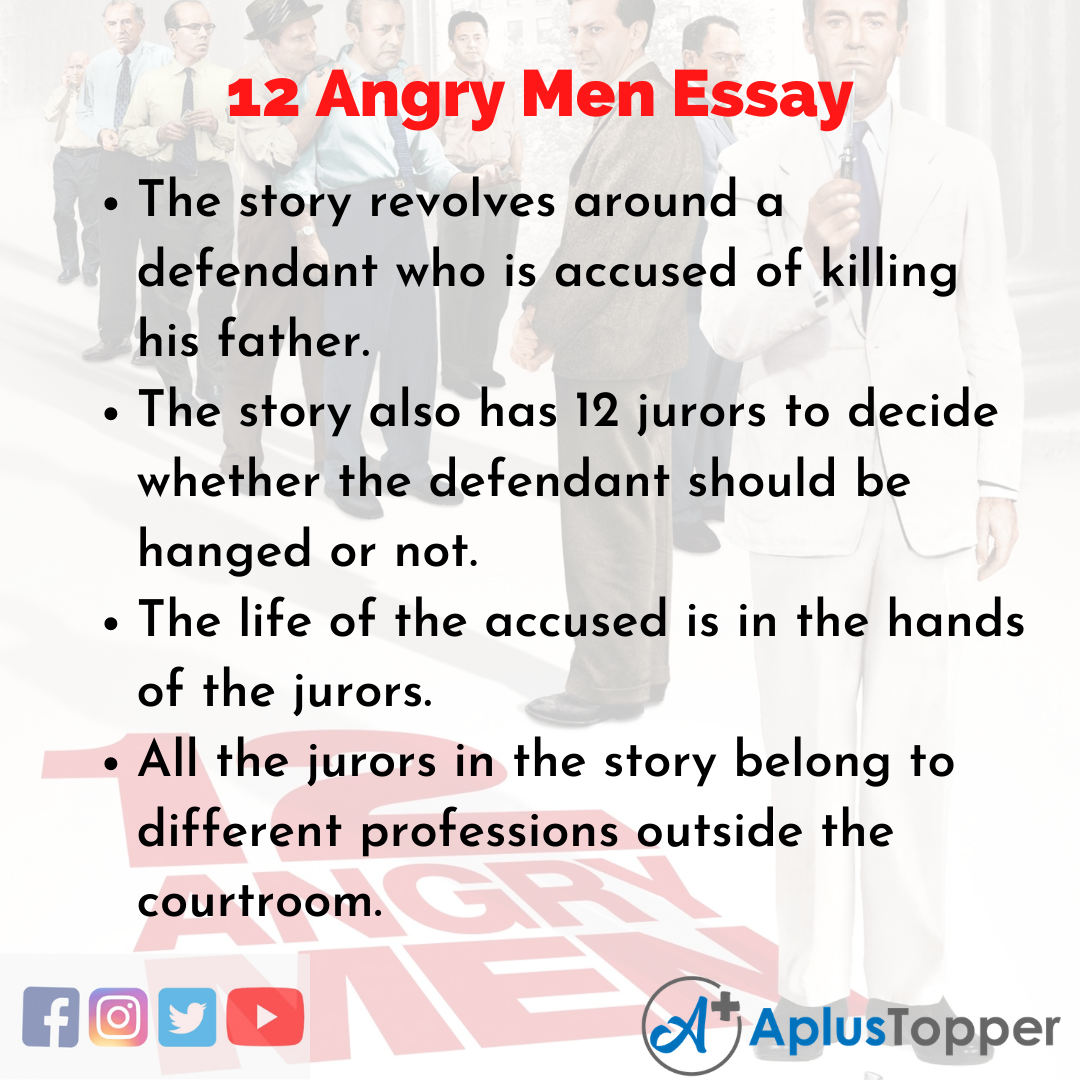 12 Angry Men is one of the finest films of that time. The story revolves around a defendant and 12 jurors over a case. The trial of the defendant is in the hands of the jurors. All the 12 jurors in the courtroom belong to the different profession outside the courtroom.

The film can be called as a suspense-thriller. The happenings of the film are not easy to predict. The story dwells into the depths of the human brain and tests the psychological and ethical limits of the human mind. People should give themselves a psychological dilemma once in a while to feel alive as some movies and books tend to test their limits. Question 1.
What kind of story is the essay based on?

Answer:
The essay is based on a suspense-thriller story.

Question 2.
Who are the characters of the story?

Answer:
The characters of the story are 12 jurors and the defendant who is accused of killing his father.

Question 3.
Is the film worth watching?

Answer:
Absolutely, the movie is worth watching because it will put people into a dilemma about the ending of the story.