Why Southwest Essay: The airline industry is a very popular part of the tourism industry and has grown tremendously over time. It has received modifications in technology and has transformed the concept of air travel.

We are providing students with samples of essay on a long essay of 500 words and a short essay of 150 words on the topic “Why Southwest” for reference.

Long Essay on Why Southwest 500 Words in English

Southwest Airlines stands today as one of the major airlines in America. It has its headquarters in Dallas, Texas, and has made its presence felt with its absolute low-cost flying.

Ever since its establishment in the 1960s, Southwest Airlines had faced many ups and downs. It has seen lots of struggles to even stay alive in the airline’s industry. The company owes its present glory to its CEO, Herb Kelleher. He is the person who developed the fun culture in the airlines, and his aura is an inspiration for many.

The CEO is an incredible human being, who, during his tenure, never accepted any pay raise. He specifically chose minimal operating costs and avoided larger airports for the sole reason of expanding his business.

Southwest Airlines provide the safest flights that are put at minimal prices. The customer service given by this airline is excellent, and the safety rating of Southwest is one of the highest. This airline has dedicated itself to provide some high-quality services to its customers and has always welcomed with warmth, freshness and friendliness.

Another reason for choosing this airline would be its punctuality. This airline maintains the timings of both the arrivals and departures with great consistency which is a great problem for many other airlines. The main factor behind this punctuality is Southwest has an average time for a turnaround of only 20 minutes.

Within the flights, there are free entertainment options. The planes are well equipped with wifi facilities, and there are options of live television, free movie streaming, free in-app messaging and radio.

The flight experience in Southwest is all-inclusive, where there are no baggage charges, no assigned eateries, with a promise of comfort. As the market is competitive, the crew is handpicked. This airline chooses its staff members very carefully, which ensures that business image is reflected very carefully. Unlike other airlines, there is no stern regulated flight experience.

Concerning the crew, there are no prejudices in hiring. This airline is not afraid to think outside the box and hires from all cultures and customs. Concerning passengers also there is something for every traveller. There are seats reserved for people who pay earlier, and there are also a variety of features for every reason for travel. The crew members work very hard for making the journey comfortable, and the travellers get the best of what Southwest has to offer.

The rapid reward offer from Southwest is a bonus. This reward lets the passenger earn points based on his ticket value. This offer started in 1987 when it was named as The Company Club but later changed it to Rapid Rewards in 1996.

Although Southwest is surely missing out on easy money by providing such a wide range of discounts, its major goal of making its customers happy is very much fulfilled. This airline hires only those people who have it in their hearts to serve the customers. The quality of flights indicates a long term dedication from such a popular airline. Short Essay on Why Southwest 150 Words in English

The largest airline of the United States, which is headquartered in Dallas, Texas, is Southwest Airlines. This airline is known for offering the most comfortable flights at very cheap rates. Not only the rates are cheap, but there is also a bonus of no extra baggage charge. With over 60,000 employees, Southwest has been successful in providing 4000 flights daily.

The crew in this airline is friendly, and the hiring takes place from all cultures. With flights taking place across 103 destinations, Southwest has a reputation for maintaining its punctuality. This airline also offers the Rapid Rewards offer, that allows any traveller to earn points against his ticket amount.

The travellers are always welcomed with mellowness, and the ground staff has a reputation for being cordial at all times. Apart from the excellent flight quality, every traveller also has the opportunity to reserve his seat in advance if he wishes to pay beforehand.

10 Lines on Why Southwest Essay in English

1. Southwest Airlines operates across 103 countries.
2. There are eleven operating bases.
3. The headquarters are in Love Field, Dallas
4. There are no flight change fees in Southwest.
5. Travel credits are provided against ticket cancellation.
6. Non-alcoholic beverages are provided free of cost.
7. There is a provision for unaccompanied minor travel.
8. It has a record for carrying maximum passengers in the year 2006.
9. The maximum carrying record is for both domestic and international passengers.
10. The planes have free wifi system. 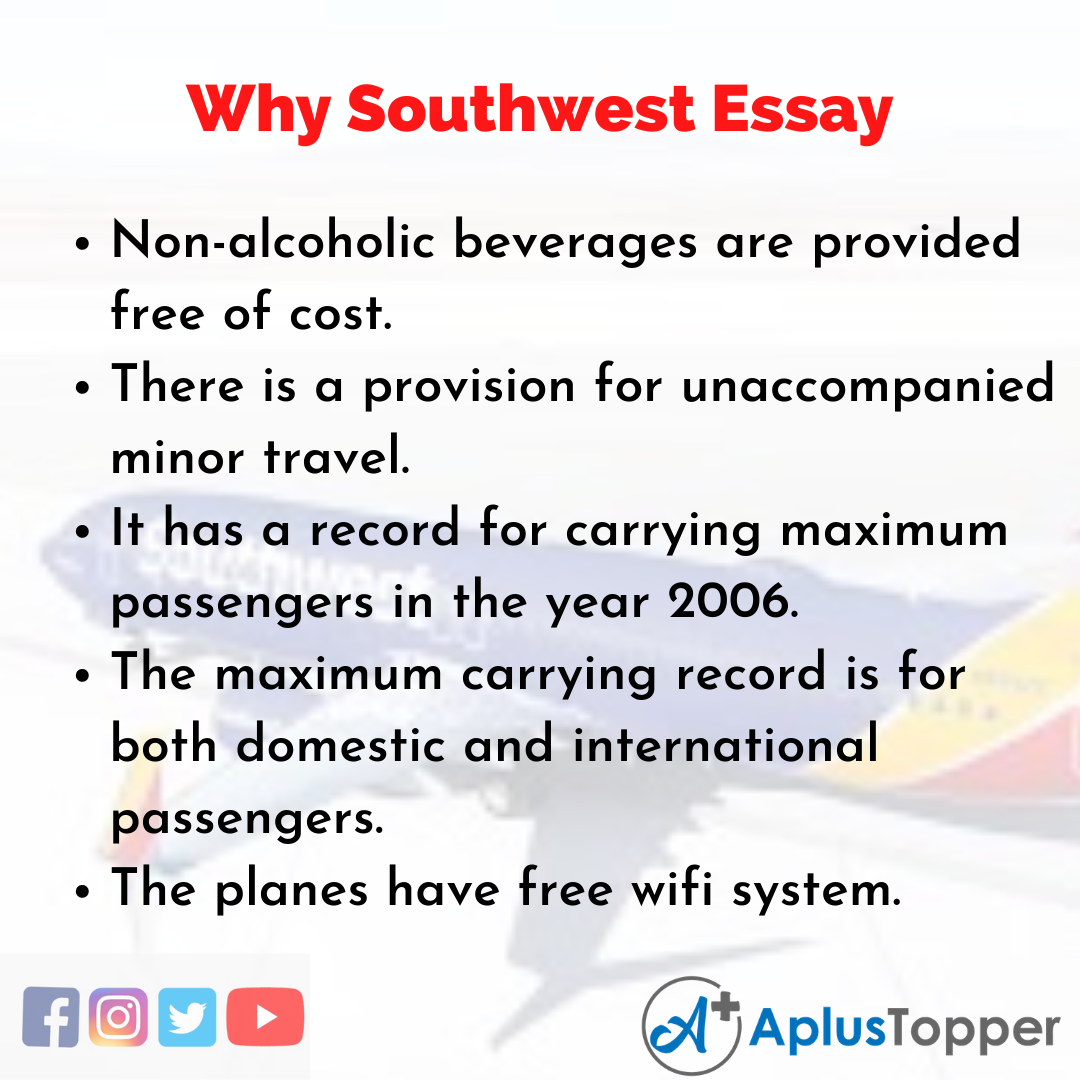 FAQ’s on Why Southwest Essay

Question 1.
Are all employees in Southwest required to wear uniforms?

Answer:
Although uniforms can be sometimes controversial, in the Southwest, every employee has to wear one.

Question 2.
What is the Unaccompanied Minor (UM) charge is southwest airlines?

Answer:
Any child within the age group of five to eleven, who travel without a guardian are Unaccompanied Minor (UM), and the charge is $50 for one trip.

Question 3.
How many bags can I carry?

Answer:
Per ticket, there is a limitation of two bags: one smaller or personal bag with a bigger one.

Question 4.
What is the cost per in-flight service?

Answer:
The wifi service comes at $8, but the TV, or movies or messaging comes at no extra cost.