War on Drugs Essay: Supply and demand is the major problem we have with battling drugs. Many Central governments are often earmarked as objects of its now age-old and publicly pulverised “War On Drugs.”

Many of these governments have been picked out as cooperated in the production on the trafficking of drugs. Throughout history, drugs have been marked as nothing but a social evil.

We provide students with essay samples on a long essay of 500 words and a short essay of 150 words on War On Drugs for reference.

Long Essay on War on Drugs 500 Words in English

The rise in drug usage began around the time American soldiers came back home from the Vietnam War addicted to heroin. At that time, drugs were only being taken by a small group of people, and they were excluded from society.

It was not until the 90’s when the usage and consumption of drugs became fashionable among young, white and middle-class American citizens and were readily available. The United States government finally “put its foot down” and thus slowly started developing agencies like the Bureau of Narcotics and Dangerous Drugs. It also started passing laws like the Comprehensive Drug Abuse Prevention and Central Act in 1970.

It was not until June 17, 1971, when the war was initiated and implemented. At a press conference in the White House, the then President of United States Richard Nixon officially declared War On Drugs. He stated drugs to be a public enemy, being number one in the United States. He also officially announced the creation of the Special Action Office for Drug Abuse Prevention.

Though President Nixon resigned, he was the founder of one of the greatest forte for the war on drugs, the Drug Enforcement Agency. Also known as, superagency considered of officers from the ODALE, Customs and CIA. This agency’s objective was to handle all the aspects of the drug problem in America.

Throughout the initial years of the programme, the agency established its main aim: to stop the availability of marijuana from Mexico to America. Around the mid-seventies the “enemy” image became to change, the enemy was now cocaine, and it was readily available from the country of Columbia. In the years of 1975, the Columbia police seized over 600 kilograms of cocaine from a small aircraft at the Cali airport.

The DEA agency, along with other agencies, is fighting cocaine and many other till date. One of the crucial reasons the war on drugs is still on is because of the cost; the war on drugs is very expensive, and thus the federal governments have spent on this never-ending war. The reason for the cost being so high is because there are so many different agencies and programmes that need higher financial aim.

The “Just Say No” campaign was founded by Nancy Reagen and soon became the centrepiece of the Reagen Administration’s anti-drug campaign. The campaign mainly focused on TV commercials and public advertisements. In the initial stages, the government wanted to know the source of the illicit substances. The answer was simply Mexico; it was the greatest exporter of marijuana in the sixties. Though in the mid-seventies, the Mexican smugglers were subdued due to stricter customs and border patrol. The lack of income is the reason that the choice of America changed to cocaine.

Cocaine was majorly exported from Colombia. Cases of kidnapping and assassination increased in the States. The Meridian Drug Cartel was mainly responsible for these violent actions. It became the first market selling dope. At the other end of the war on drugs, is the treatment for the addiction. The cost of drug abuse is high and is financially draining for both the abuser and his/her family. The aftermath of having fun often leads to destruction and death. 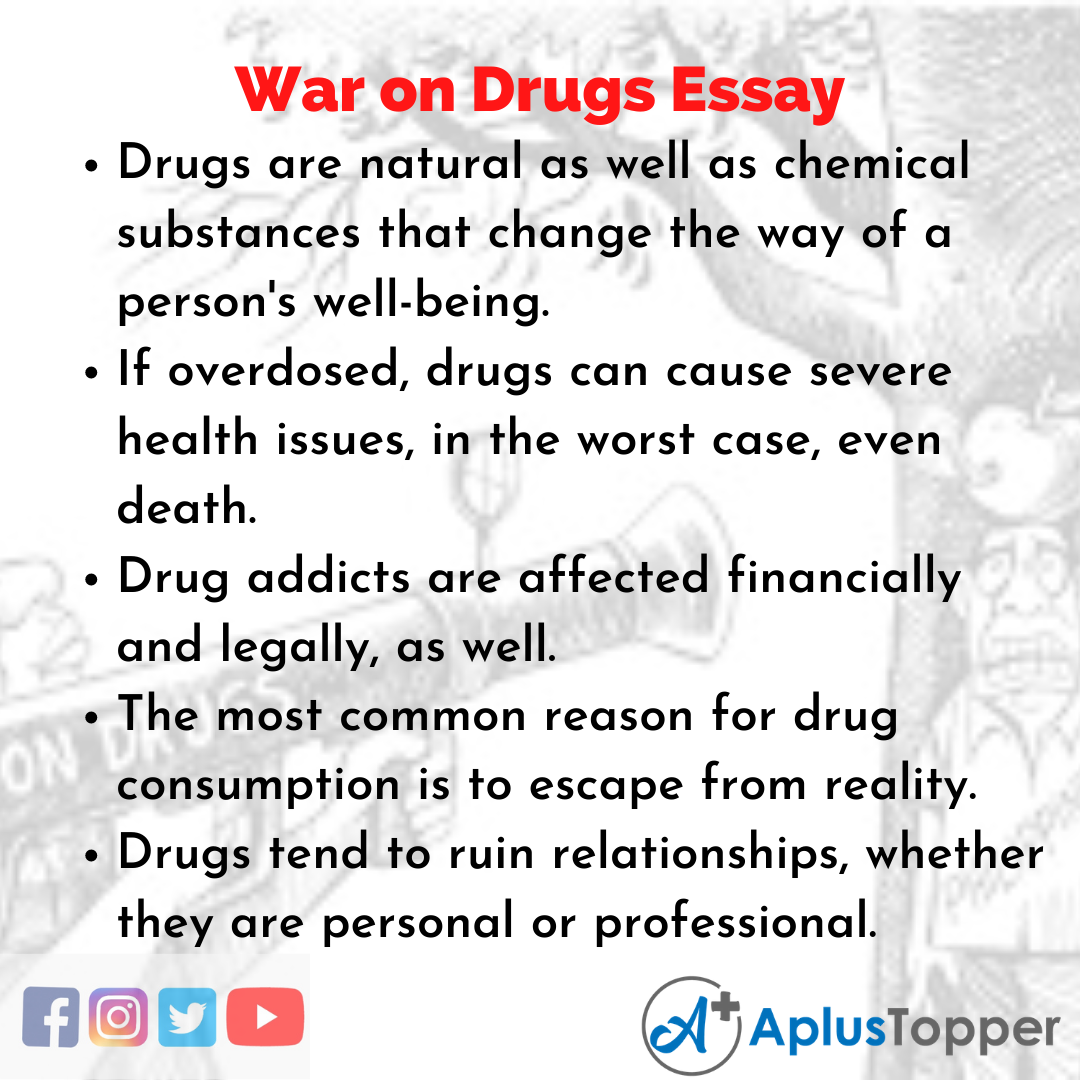 Short Essay on War on Drugs 150 Words in English

Drug addiction is one of the life-risking problems faced by many people in the world today. The war on drugs campaign was initiated to define and thus reduce the illegal trade of drug and fight against smugglers.

The government issued laws that were not only meant to reduce the export or production of drugs but also the count of drug addicts. Consumption of drugs often leads to addiction.

Drugs lead to drug dependency that results in complete psychological seizure and creates a compulsion to use a drug to experience hallucinogenic effects. The most prominent Act under the war on drugs was the Harrison Act. It abolished the selling of drugs like cocaine and heroin. If the consumption of drugs is not controlled and overdosed, then it may prove to be fatal. Drug addicts are affected financially and legally, as well. Drugs are often consumed to increase physical stamina.

10 Lines on War on Drugs in English FAQ’s on War on Drugs Essay

Question 1.
When was the war on drugs initiated?

Answer:
The war on drugs was officially initiated on June 17, 1971, by the then President of U.S., Richard Nixon.

Question 2.
What are the ill-effects of drug consumption?

Answer:
Drugs tend to ruin relationships, whether personal or professional. It induces a significant behaviour change. Drug addicts are affected financially as well as legally.

Question 3.
What are the symptoms of drug consumption?