Utilitarianism Essay: Utilitarianism is one of the most influential theories of morality. It mainly advocates actions that lead to happiness and avoids any form of negativity. The purpose of mortality is to make lives better. It is the greatest principle of happiness. It determines right from wrong. It mainly focuses on the outcomes.

Utilitarianism usually uses actions that maximize happiness and well-being of an individual. It is a version of consequentialism, which means that the consequences of any actions are either right or wrong. It considers all the interests of humans in an equal manner.

Utilitarianism is about people who care about everyone capable of suffering and capable of making their lives better by improving it. It also refers to those actions that maximize pleasure and minimize pain. This theory is based on the elucidation that a consequence of an action justifies the moral acceptability of means to reach an end, and the results of the action outweigh any other considerations. Utilitarianism believes that sacrificing one man to save a community is the right choice because the happiness of a whole bunch of people is being maximized.

Utilitarianism does not take into account personal relationships. It is the duty of every person following utilitarianism to help people without thinking about the consequences. Utilitarianism is based on three principles which are as follows, happiness or pleasure is the only thing that holds intrinsic value, all actions that promote happiness are correct, and the actions that do are not right. Everyone’s happiness counts equally.

Utilitarianism in socio-political construct aims for the betterment of the society as a whole. It is a reason-based approach that determines the right and the wrong. It also has certain limitations based on the consequences of the situation. In the world of business and commerce, utilitarianism holds the most ethical choice that a person will produce the greatest good for the greatest number. If a limitation is applied to utilitarianism, it tends to create a black and white construct of mortality. There are no shades of grey in utilitarianism. It is either black or white. 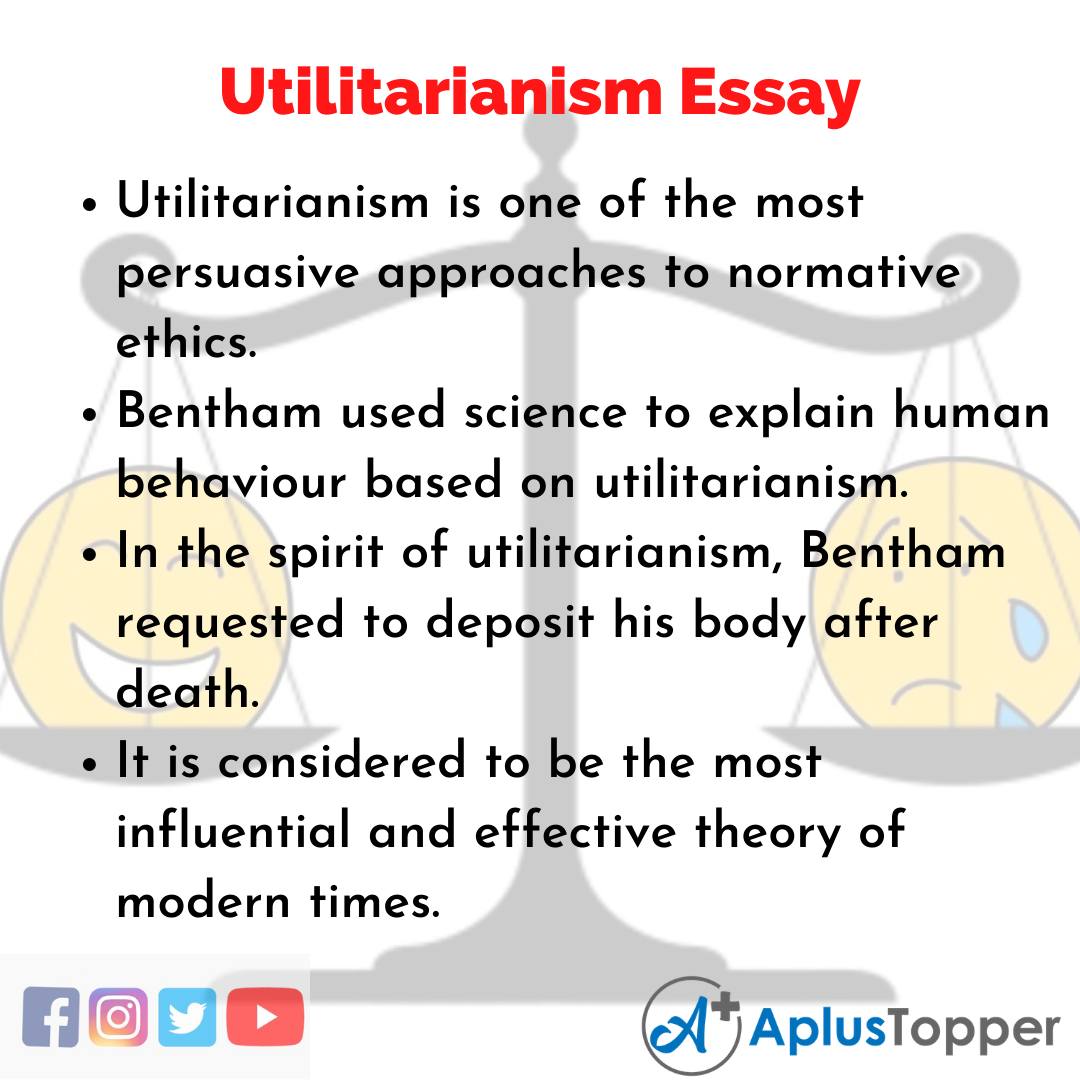 Utilitarianism is a traditional and ethical philosophy that is associated with Jeremy Bentham and his fellow mate John Mill. Both were British philosophers, economists and political thinkers. The concept of utilitarianism promotes that an action is right if it leads to happiness.

A utilitarian philosophy aims at making society better. It says that if an action is right, it results in happiness and would lead to the betterment of a group or a society. Utilitarianism also has its types. Apart from act-utilitarianism and rule-utilitarianism, there is a concept known as negative utilitarianism. R.N Smart introduced it. This concept seeks the quickest and the least painful method of killing the existence of humanity.

People who follow utilitarianism are known as utilitarians. The utilitarians believe that the purpose of mortality is to make life better by increasing the number of good things in the world like pleasure and happiness and reducing the bad things in the world like pain and unhappiness. This concept rejects any kinds of moral codes like taboos and commands based on different traditions or any order given by any leader.

10 Lines on Utilitarianism in English 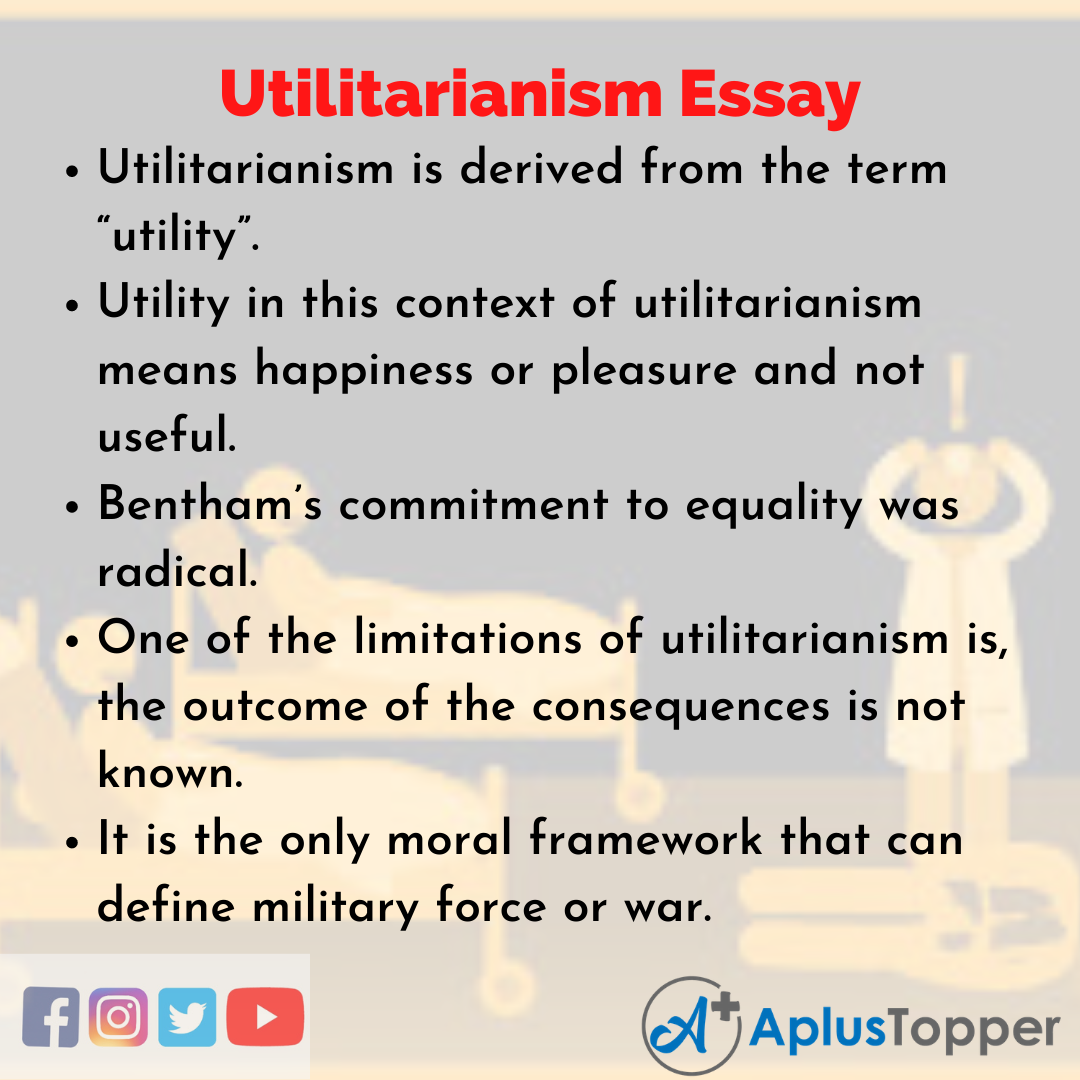 Question 1.
What is the main theme of utilitarianism?

Answer:
The main theme of utilitarianism is, it morally promotes everyone’s values with equal treatment to everyone, centring around happiness.

Question 2.
Name one drawback of utilitarianism.

Answer:
It fails to take into consideration the concept of justice since its main focus is on happiness and pleasure of the individual, no matter what be the outcome of a situation.

Answer:
It does threaten individual rights to some extent. It weakens the notion of individual rights, making it useless in its context. It talks about sacrifice for the sake of others’ happiness.