The Lottery Essay: “The Lottery” is a short story of an unusual town that is bounded by the always following traditions. This story consists of a theme. There are various connections to the theme made by the author.

The story is based on an American setting. This story questions tradition. It questions the relationship between civilization and violence.

Long Essay on the Lottery 500 Words in English

The story is based on an American setting and has been written by Shirley Hardy Jackson in the year 1948. It is about a town that has been caught up in a trap of a tradition that is being followed from a very long time.

The tone and setting of “The Lottery” are the important aspects of the story. At the beginning of the story, Jackson very specifically describes the setting. In the beginning, she talks about the 27th of June, which was a clear and sunny day. The day beamed with freshness and warmth, just like a normal summer day with normal people doing their daily work. The writer gives a very misleading beginning to the story, by describing it as a new beginning for a very normal town. But this is not the case. Later on in the story, it takes a turn, and it is rather an end and not a beginning. It is a day of lottery in the town resided by only 300 people. The lottery is run by Mr Summers, who along with Mr Graves the postmaster brings a black box at the setting.

Mr Warner was the oldest man in the town and had participated in seventy lotteries presenting the tradition of lottery in the town. In the current setting, a new black box has been used by Mr Summers because the old traditional one used by Mr Warner had become shabby. No one in the village wanted to fool around with the traditions, but Mr Summers did.

Mr Warner feels that the lottery is the only thing that had kept the town stable. According to him, the only way to ensure good crops is human sacrifice. This short story mainly aims at highlighting the fact that following traditions blindly can be dangerous. The reader shows the bizarre level of superstition through the ritual of murdering innocent people just for the sake of tradition. This story shows an innocent being stoned to death just to fulfil traditional beliefs and happenings and making a sacrifice to nature and the harvest.

There are two main symbols in the story, Mr Warner and the black box. Both symbols give a sense of tradition to their readers. Mr Warner did not want to stop the traditional lottery, and the black box was just a mere symbol of tradition. The story consists of a traditional plot structure and has narrative elements like back story and foreshadowing. This story shows how some traditions are not worth continuing. Death of a fellow human just for the sake of extra corn is not worth taking place.

The story begins by lulling the readers into a false sense of calm, showing the present-day connotations of winning a lottery and then finally striking with the harsh reality, where the prize of the lottery was death. Following traditions is a good thing but to a certain extent. It is good to keep past beliefs alive, but not at the sake of taking a person’s life. 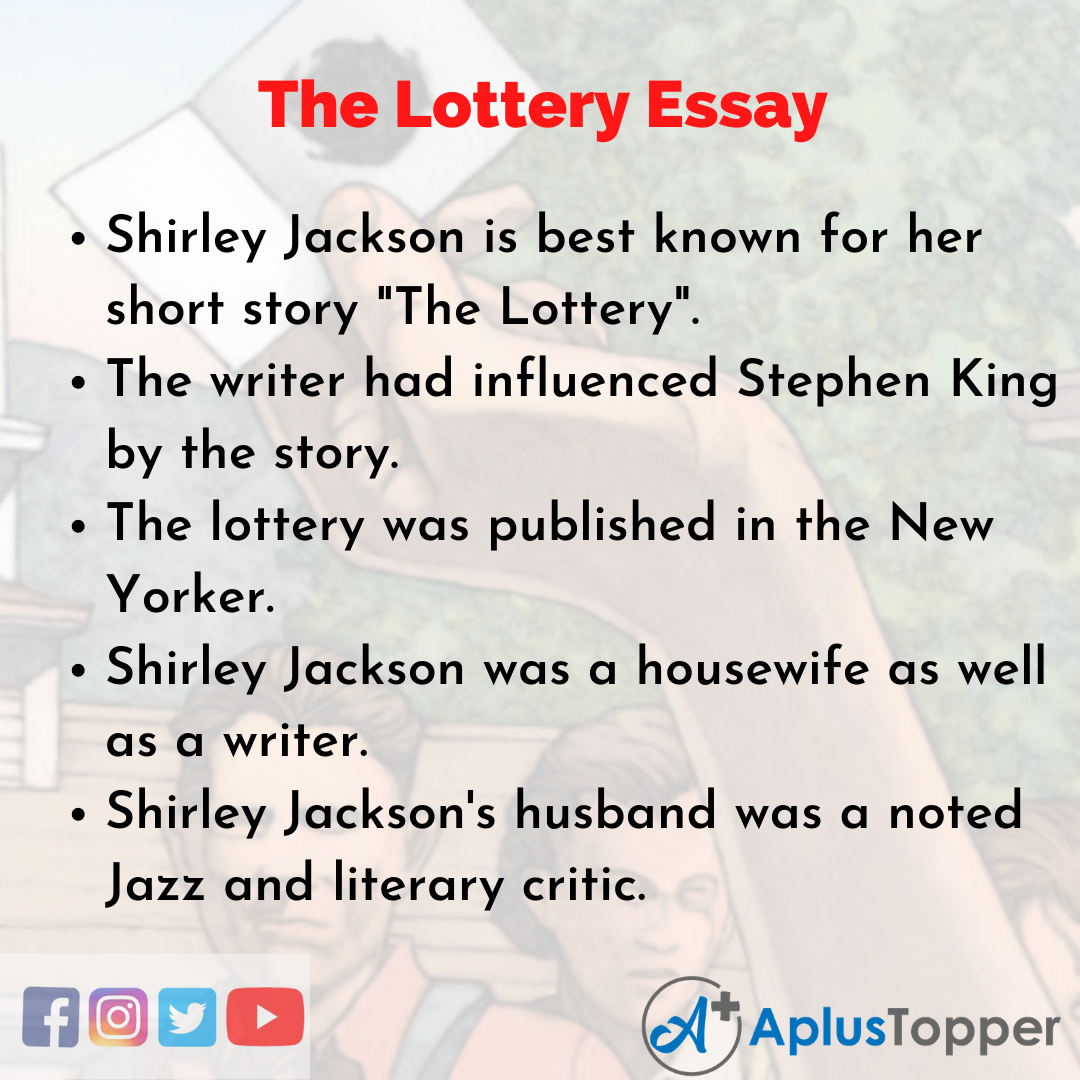 Short Essay on the Lottery 150 Words in English

“The Lottery” is a famous short story written by Shirley Jackson. In this story, the individuals are vulnerable to persecution by a group. The annual lottery breaks down the relationships and bonding of the families and communities with the town and builds them back again.

Just to serve the previous traditions, an innocent is killed to satisfy nature for a good yield of crops. Justifying the death ritual and considering it as a sacred act is wrong. The lottery has been taking place since the past seventy years with Mr Warner being one of the oldest men in the town.

The theme of parenting in this story is also heart-wrenching when a woman puts a stone on a child’s hand. Fostering the traditions of violence and ultimately killing scapegoats by stoning them for good crop yield. Bounded by tradition, the town had lost its feelings and emotions. Selfishness overpowered the people leading to the murder of an innocent, awarding the winner with the garland of death.

10 Lines on the Lottery in English 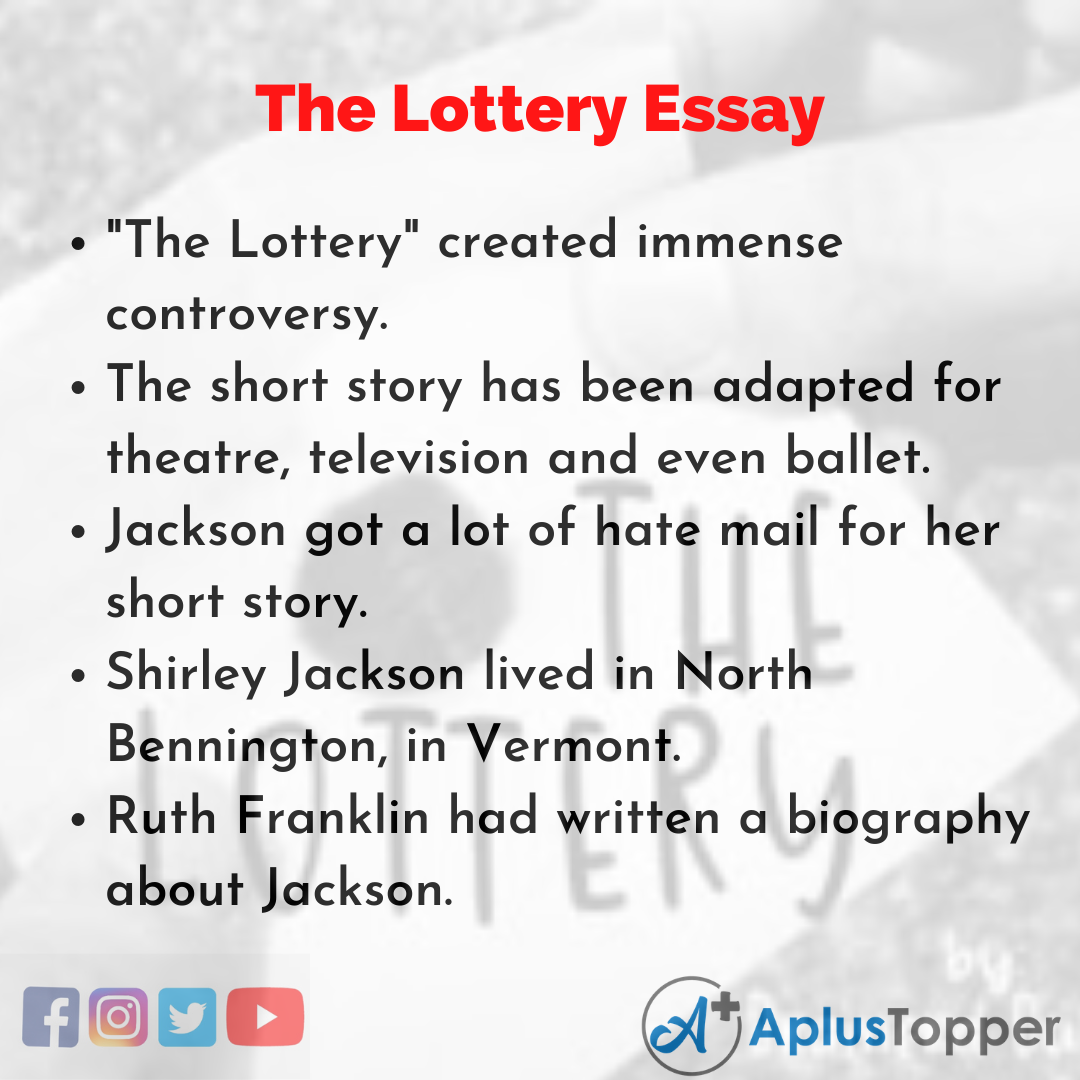 FAQ’s on the Lottery Essay

Answer:
Human nature and the power of traditions are the two themes of The Lottery.

Question 2.
When was the lottery conducted in the story?

Answer:
It was conducted on the 27th of June where the entire community gathered in the time square.

Question 3.
Write is the moral lesson of the story.

Answer:
The moral lesson is, if something has been done traditionally, it does not mean it has to be continued. The lottery rightly mentions the dangers that lie ahead of following traditions blindly.

Question 4.
What is the representation of the black box in the story?

Answer:
The black box represents a symbol of tradition and illogical loyalty of the villagers.