Status Of Women In India Essay: Jawaharlal Nehru once stated that the status of women could determine a nation’s worth. The ancient Indian culture deprived women of rights and equality with men. As a result of their deprivation, eminent people like Raja Ram Mohan Roy and Swami Vivekananda started a movement against women’s struggle with subjugation and inequality.

Mahatma Gandhi induced the revival of women’s position through active participation in the Freedom Movement. Since Independence, the status of women in India has slowly gained momentum.

Through social evils like the Female Infanticide, Sati system, Child Marriage, and Dowry system, a nation’s overall growth decline. The true liberation for women is possible only when people change their conservative attitudes towards women.

Below we have provided a Long, descriptive Essay and a Short, brief Essay. The extended essay consists of 400-500 words and is a guideline to help students with their essay topic. The short essay contains 150-200 words to help and guide children and kids.

Women are considered as the soul of a society. They are self-trained and self-empowered humans responsible for the moral and overall development of their children. They are a great inspiration to the family and a leading example to the society.

The social stratification of women in India considers them as a second rate citizen of the country. This subjugation is no more atrocious than the violence a woman experiences in her domestic setup. The act of violence and sexual abuse against a woman is active even today in every society in the boundaries of education, class, age, and culture.

The social stigmas dominated the early age of the Indian era in society. Even though women of the early days were educated, they battled the sufferings of the existing social evils. However, people like Ishwar Chandra Vidyasagar, Swami Vivekananda, Raja Ram Mohan Roy, others started various Freedom Movements for women.

Women acquired revered positions in Politics and acquired skills in Martial arts. The First Indian woman to obtain the area as the president of the Indian National Congress and Governor of an Indian state was Sarojini Naidu. Since then, the status of women in India has seen momentum growth.

Modern India or Free India has witnessed some to many developments in the social position and status of women. Many reformers in India have worked for the betterment and upliftment of women’s condition in society.

They have attained consciousness of their privileges and rights in the country. They are educationally, politically, socially, and economically progressed and take active participation in various fields. Their participation is vital for the development of the country, and yet there is any room for compliancy.

The government abolishes social practices like child marriage, Female Infanticide, Dowry, and Sati. Despite abolishment, due to lack of awareness, women struggle with their Freedom. A woman cannot attain complete Freedom unless she comes forward and organizes the power to elevate herself in society.

Many parts of Rural India still practice Child Marriage and Female Infanticide, there is much that needs to be done regarding the improvement of women’s status. To combat these, women should raise their voice against those dominating them. They need to fight against the social evils that restrains them.

Status of Women In India

Women have been given gender equality in terms of work and payment. They are provided with provisions for maternity leave and are supplied with equal opportunities under Article 16 of the Indian Constitution.

Today’s era sees the active participation of girls in schools and universities. The girls are at equal par with boys in terms of Education. The Government of India under Article 14 of the Indian Constitution has made Education compulsory for every girl child up to the age of fourteen.

Women have occupied significant positions in the field of Politics such as President, Prime Minister, Governor, Lok Sabha Speaker, etc. Late Indira Gandhi was the first female Prime Minister of India, while Pratibha Patil was the first Women President of India who has led India to its best.

In short, even not a complete change, the current status of India sees a steady transformation of women compared to the past ages. The current status of women notices active participation in politics, military, economics, technology, and various other sectors. Thus, women occupy an elevated position in their family and society. The short essay mentioned below is for kids and children up to class 6. The essay is to help with essay assignments, comprehension, and school events.

In a country that worships women deity, women are often mistreated in society. The Indian womanhood since the days of folklore has remained as pawn played by dominated figures. For instance, in Ramayana and Mahabharata, both Sita and Draupadi were mistreated through incidents like ‘Agni Pariksha’ and ‘Exile.’

Through the Freedom struggle, women slowly started coming out, breaking through their shell to partake in various movements, activities, and even Education.

India homes women who have reached success through struggles, battling with the social stigma. Education and self-consciousness among women have elevated their progress over the period. Women of today’s world are empowered and have gained advancement leading to success in every field. There is no shortage of women doctors, nurses, judges, police officers, governors, etc., in this cosmopolitan era.

India has seen the growth of empowered women take high positions in various fields. For instance, Indira Gandhi was the first women Prime Minister who guided India for fourteen years and has contributed massively in domestic and foreign policies.

Education has played a vital role in elevating the status of women in India. It teaches and creates awareness among women about their rights and grants them access to become independent.

Thus, women overtime have attained equal power with men and use their rights to fight against discrimination and other social evils in the society.

10 Lines about Status of Women in India in English 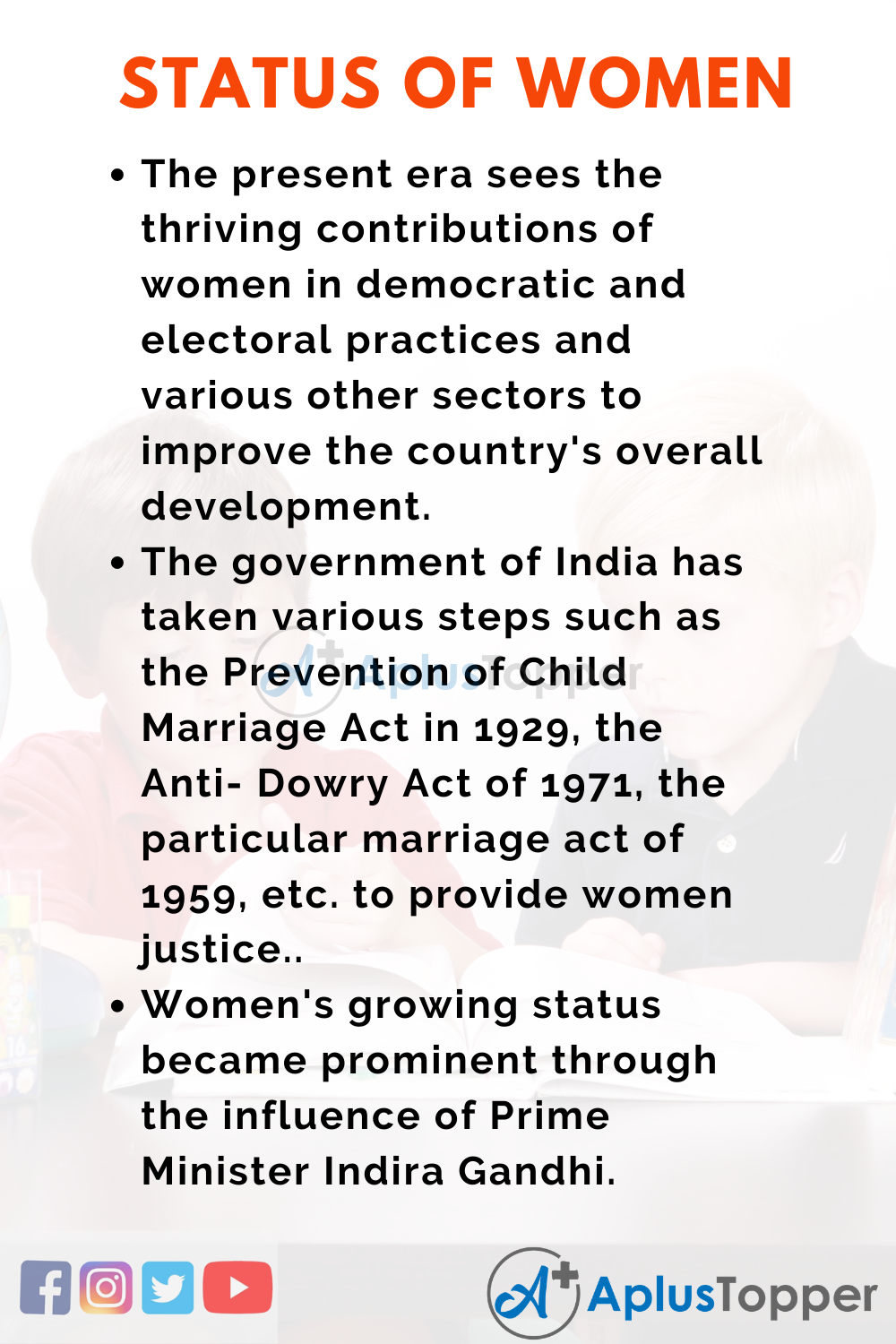 FAQ’s On Status Of Women In India Essay

Question 1.
What does the sentence ‘women status’ mean?

Answer:
The term ‘Women’s status’ describes their situation regarding men. The focus of this term has led to the access and utilization of various resources and information.

Question 2.
How were the women treated in the early century?

Answer:
Women of the Vedic period were given equal rights in par to men. However, with the onset of medieval times, women’s Freedom was chained under stigmas such as Sati, Child marriage, purdah system. This leads to the slow subjugation of the status of women in India. However, the Freedom struggle movement paved the way for women to participate and contribute to society.

Question 3.
Why is women’s status essential for the development of the country?

Answer:
Women elevated status leads to empowerment, which further leads to the development of society on the whole. It enhances concerns regarding rights and increases both the quality and quantity of resources needed for growth.

Question 4.
How has India achieved in terms of Women’s status?

Answer:
Women have evolved through the chains of struggle and have now achieved their overall Independence. They have contributed massively in various sectors, whether technology, science, sports, or academics. With the encouragement of Education, women are coming in par with men, and this is one of India’s greatest achievement.