Romanticism Essay: Romanticism was an artistic, intellectual, literary and musical movement that took place in Europe towards the end of the eighteenth century and mid-nineteenth century. This artistic movement was at its peak in most areas in the approximate period of 1800 to 1850.

The prominence can characterise Romanticism it gave to emotional sensitivity and individual subjectivity along with the glorification of all the nature and past preferring the medieval rather than the classical. For Romantics, imagination was the most important creative faculty, rather than reason.

We are providing students with essay samples on a long essay of 500 words and a short essay of 150 words on the topic Romanticism for reference.

Romanticism was an artistic period of attitude or intellectual orientation that was characterised by several works of literature music, painting, architecture, criticism and historiography in the Western Civilisation over a time period from the late 18th century to the mid-19th century.

Romanticism was first defined as the aesthetic in literary criticism around the 1800s, and it gained momentum as an artistic movement in Britain and France. Romanticism was partly a reaction to the Industrial Revolution, the political norms and noble social of the Age of Enlightenment and the scientific rationalisation of nature – all elements of modernity. It was embodied most strongly in literature, visual arts and music but had a major impact on chess, natural sciences, social sciences and education. It also had a remarkable and complex effect on politics with the romantic thinkers influencing nationalism, liberalism, conservatism and radicalism.

Romanticism can be seen as a rejection of the perception of harmony, order, calm, idealisation, balance and rationality. This typified Classism in general and Neoclassicism in particular in the late 18th century. Romanticism was also an aftermath of the French Revolution that took place in 1789. Even though often predicted as the opposition of Neoclassicism, early stages of Romanticism was shaped largely by artists trained in Jacques Louis David’s studio, including Anne Louis Girodet-Trioson, Baron Antoine Jean Gros and Jean Auguste Dominique Ingres.

The movement emphasised on intense emotions serving as an authentic source of an aesthetic experience. It gave a new emphasis to emotions such as horror, terror, apprehension and awe – especially those experienced in confronting the unique aesthetic characteristics of sublimity and nature’s beauty. Contrasting to Classicism and Rationalism of the Enlightenment, Romanticism brought back medievalism. It also brought back the elements of art and narrative perceived as truthfully medieval in the attempt at escaping population growth, industrialism and early urban sprawl. Although this artistic movement was rooted in German Sturm and Drang movement, in which emotion and intuition were preferred to the rationalism of Enlightenment, the ideologies and events of the French Revolution also served as proximate factors. It elevated ancient customs and folklore to something noble but also spontaneity as a helpful characteristic.

Romanticism gave a high value to the achievements of ‘heroic’ artists and individualists, whose example it maintained would raise the quality of the society. It also helped in promoting the individual an individual’s imagination as a critical authority gave the freedom of classical notions of forms in art. The period of Romanticism had a few elements which stood out in the Western Civilisation. Romantics had belief in individuals and the common man, and they shared their love for nature. Romanticism showed interest in the past, supernatural, gothic and bizarre things. They had great faith in the inner experience and the power of imagination.

There was a strong recourse to the natural and historical inevitability – a spirit o the age in the representation of its ideas. In the second half of the nineteenth century, Realism was offered, which served as the polar opposite of Romanticism. The decline of Romanticism started during this time which was associated with multiple processes, including political and social changes and spread of nationalism. 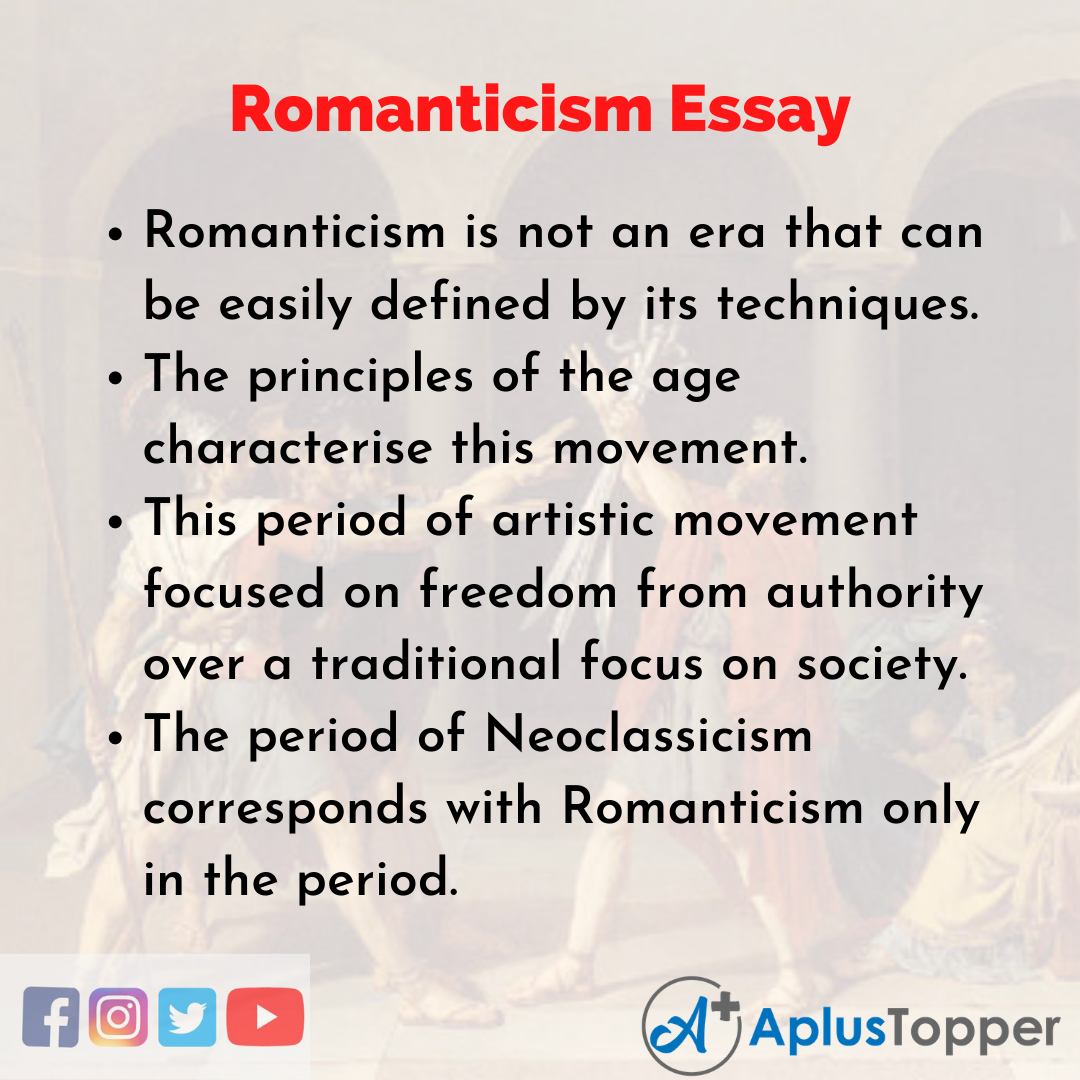 Romanticism was an intellectual as well as an artistic movement that occurred in Europe between the period of the late eighteenth and mid-nineteenth centuries. Recognised broadly as a break from the Enlightenment’s guiding principles – which confirmed reason as the foundation of all the knowledge – the Romantic Movement emphasised on the importance of individual subjectivity and emotional sensitivity.

The nature of the Romantic Movement may be approached with the primary importance of free expression of the artist’s feelings. To express the feelings of the artists, Romantics believed that the content of the art should come from the imagination of the artist. Not specifically for Romanticism, there was widespread strong belief importance give to nature. This particularly affected the nature of the artist’s work, when the artist was surrounded by it – preferably alone. Contrary to the very social art of the Enlightenment, the Romantics were distrustful of the world, tended to be in close connection with nature.

10 Lines on Romanticism in English 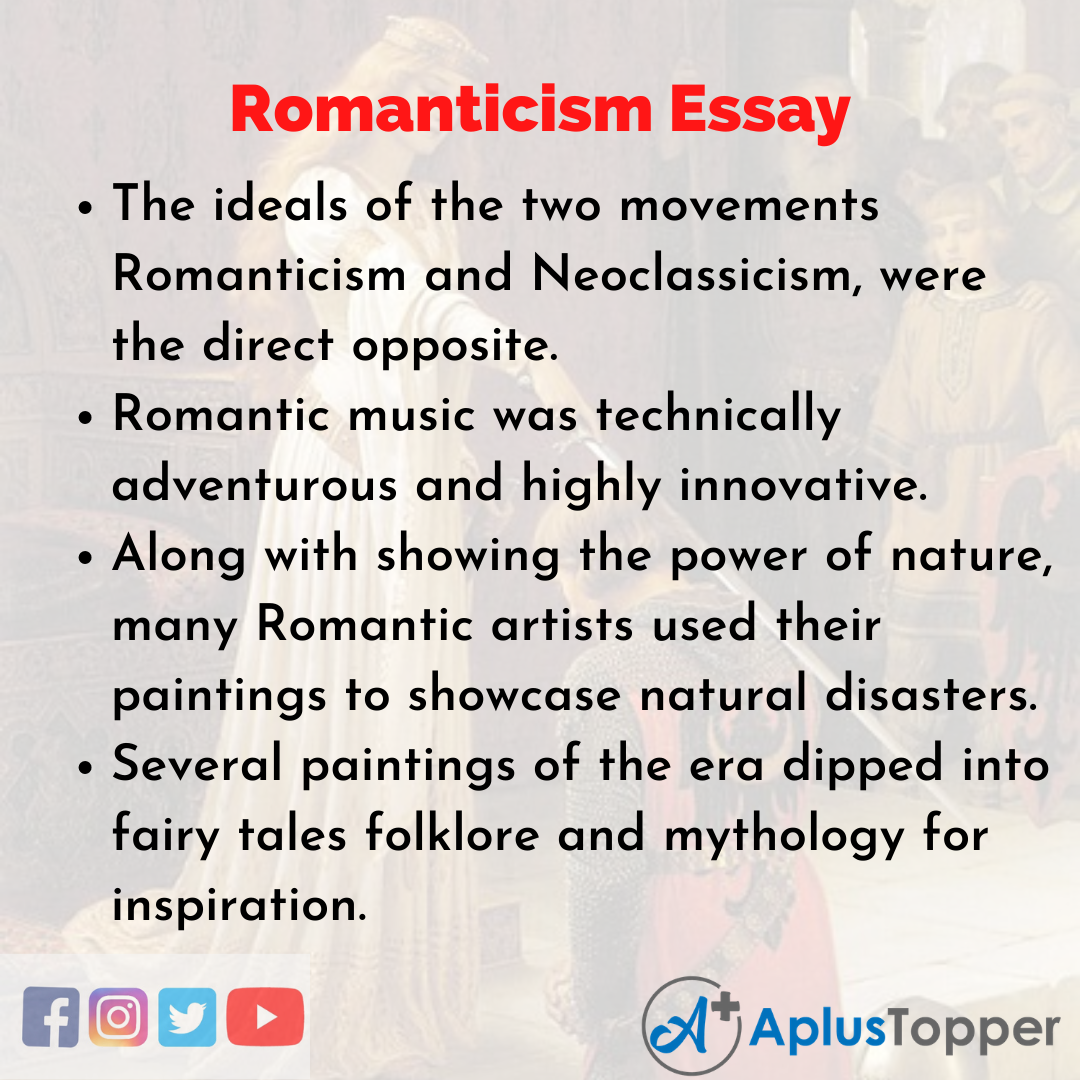 Question 1.
Which is the largest defining painting of the era?

Answer:
Francisco Goya’s painting El Tres de Mayo 1808 (May 3) is considered one of the largest defining paintings of the era.

Question 2.
What did Romanticism focus on?

Question 3.
When did Romanticism begin?

Answer:
The Romantic Movement began approximately in the year 1770.