Right to Privacy Essay: Privacy is a fundamental right granted to every global citizen. It’s the basis of human dignity and freedom. The right to privacy is shown and acknowledged in all the major constitutions, and India is no different.

Some legal experts define privacy as a human right applicable to every human being by their existence. The right to privacy is determined from case to case. In this article, we will see India’s position on this matter. 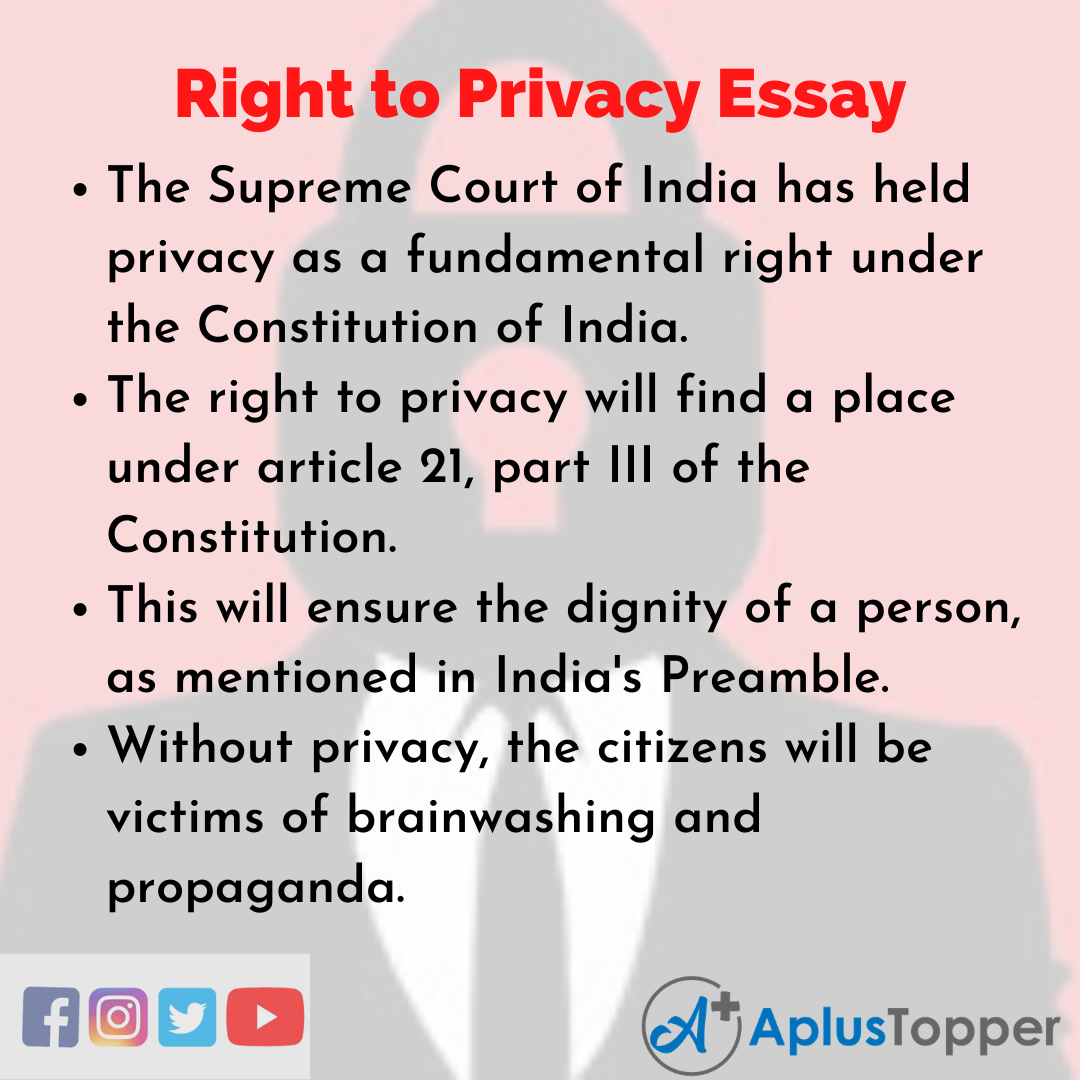 Long Essay on Right to Privacy 500 Words in English

The concept of privacy can be traced back to ancient Hindu texts. In Hitopadesh, it says that certain issues (worship, sex, and family matters) should be protected from disclosure. So the concept of privacy is not new to our country. The Puttaswamy judgment deems that the right to privacy is protected as a fundamental constitutional right under Articles 14, 19, and 21 of India’s Constitution.

This was triggered by the concerns about surveillance worldwide because of Cambridge analytical and other scandals. Economic Survey also shows a data explosion led by the falling marginal cost of data. Privacy, as defined by the U.S. judiciary, is the right to be let alone. Experts now deem this definition of privacy as insufficient in a large interconnected world. Today due to the discovery of the internet and social media, everything is interconnected. The Supreme Court of India opined (in Ram Jethmalani vs. Union of India case.) that “it is important that human beings should be allowed domains of freedom that are free of public scrutiny unless they act in an unlawful manner.” This matter’s trigger is the government’s Aadhaar scheme, where personal details and data were collected to identify eligibility criteria for some government welfare schemes.

Few petitions were filed in the Supreme Court in 2015, stating the Aadhaar card policy a breach of privacy. The petitioners debated that Aadhaar enrolment was the path to a “totalitarian state” and an open invite for personal data leakage. The nine-judge bench, which was led by Chief Justice of India J.S Khehar, engages in an intense discussion for the first time with scholars and lawyers on whether or not privacy is a fundamental right in the Constitution. The dread expressed by the Supreme Court regarding the collection and use of data is risking personal information going into the grasp of private players and service providers. In this modern-day and age, where every minor data of ours is exposed in our digital devices and to the government, data protection has become a major issue. The court highlights the fact that “state is obliged to put a robust personal data protection mechanism in place in this digital age.”

Another clause to the right to privacy factor is the involuntary use of narco or lie detector tests during legal interrogations. This is an “intrusion” into a person’s “mental privacy.” Therefore in 2010, the Supreme Court held a judgment. Such tests on individuals from weaker sections of society unaware of their fundamental rights and unable to afford legal advice are being stripped of a fundamental right.

In India, the right to privacy has developed over a span of 60 years. The right to privacy is protected as an eccentric part of personal liberty under Article 21 and as a part of the freedom guaranteed by part III of the Constitution. After observing these cases, one might say that the Right to Privacy is related to an individual’s liberty, which leads to being recognized as a Right to Life.

Short Essay on Right to Privacy 150 Words in English

The right to privacy can be defined as choosing an individual where he/she chooses which parts of their lives; they have to disclose to society. In India, the right to privacy is to constrict the government and private actions that threaten citizens’ privacy. Privacy also extends to bodily integrity, autonomy, speech, and freedom to move or think. In the People’s Union for Civil Liberties vs. Union of India, Kharak Singh vs. the State of UP —- Supreme Court held that the right to privacy is a part of the right to protect life and personal liberty under Article 21.

Recently the focus on the right to privacy is based on the data vulnerability of the digital age. After the global Cambridge Analytica disclosure of 2018, the right to privacy has been a subject of international debate. Therefore people should be made aware of the technologies that use their personal information to ensure that they are well-informed that their privacy is at risk. Answer:
Broadly speaking, privacy is the right to be let alone or freedom from interference or intrusion.

Question 2.
Is the right to privacy is a fundamental right?

Answer:
On 24 August 2017, the Supreme Court of India declared privacy as a fundamental right protected under the Indian Constitution.

Answer:
Privacy is a fundamental right, essential to autonomy and the protection of human dignity.

Question 4.
What are the four types of invasion of privacy?

Answer:
The four most common types of invasion of privacy– appropriation of name, intrusion upon seclusion, false light, and public disclosure of private facts.