How do you Represent the Data in Statistics

There are many ways to represent numerical data pictorially. Such as pictographs, bar graphs, etc. These graphs help in the suitable representation of the data.

A pictograph is a way of representing data using pictures or symbols to match the frequencies of different information or events.

Example 1: In a class of 25 children, absentees in a particular week were shown by a pictograph as shown here: 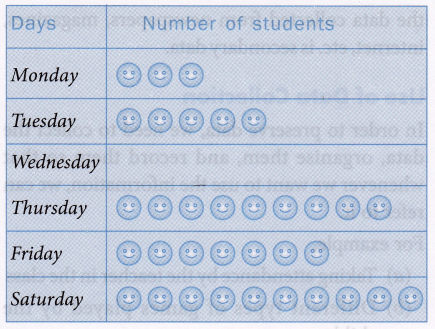 Read the pictograph and answer the following questions:
(a) How many children were absent on Wednesday?
(b) How many children were present on Saturday?
(c) On which day only three absentees were there?
(d) On which day maximum absentees were there?
Solution:
(a) None was absent on Wednesday.
(b) 15 children were present on Saturday.
Number of absentees =10
Total number of students = 25
Number of present students =25-10 = 15
(c) On Monday, there were only three absentees.
(d) On Saturday, there were the maximum number of absentees.

Example 2: In a park, Gaurav collected information about the colours of cars on a particular day. The information is given below:

Draw a pictograph for the above data.
Scale: 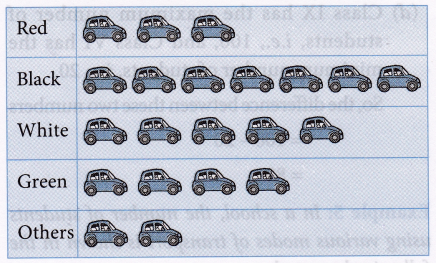 A bar graph is a chart with rectangular bars of equal width and lengths, proportional to the values that they represent. The bars can be horizontal or vertical with equal spacing between them. It is also called a column graph.

Construction of a bar graph
To draw a bar graph, we draw two mutually perpendicular lines on a plane paper. The horizontal line is called x-axis and the vertical line is called y-axis. If the columns are drawn on a horizontal line (x-axis), the scale of heights of the bars is shown along the y-axis or vice versa.
For drawing bar graphs the following points should be kept in mind:
1. The width of the column (bar) should be uniform throughout.
2. The gap between the bars should be uniform throughout.
3. Bars may be horizontal or vertical.
4. Choose a suitable scale for determining the height of bars.
The vertical bars are preferred because they give a better look. To construct a bar graph, a suitable scale has to be decided on either axis, so that the lengths or heights of bars can be represented in the graph.

Example 3: The weekly sale of shoes in four shops is given below:

Draw a pictograph and a bar graph representing the weekly sale of shop no. 4.
Solution: Pictograph for the sale of shoes in shop no. 4: 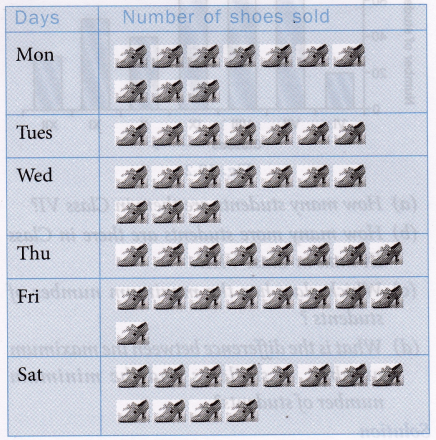 Bar graph for the sale of shoes in shop no. 4 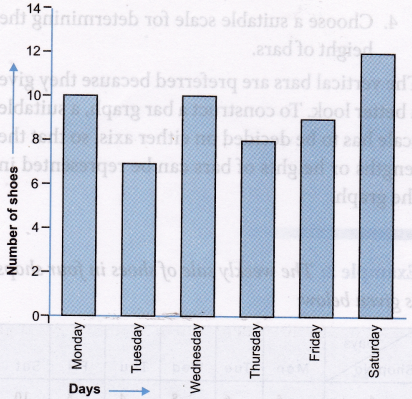 Example 4: The following graph shows the number of students in each class of a school. Study the graph and answer the questions that follow: Example 5: In a school, the number of students using various modes of transport is shown in the following bar graph: 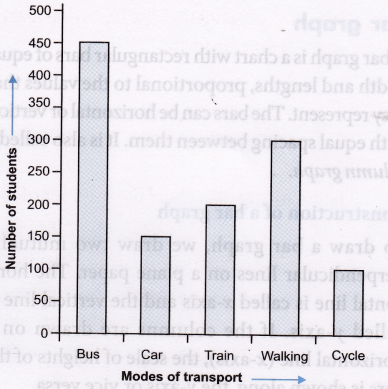