Racism Essay: Racism can be defined as the belief that individual races of people have distinctive cultural features that are determined by the hereditary factors and hence make some races inherently superior to the others. The idea that one race has natural superiority than the others created abusive behaviour towards the members of other races. Racism, like discrimination towards women, is a form of discrimination and prejudice.

We are providing children and students with essay samples on an extended essay of 500 words and a short piece of 150 words on the topic “Racism” for reference.

Racism is the illogical belief that a particular race has distinctive cultural traits endowed due to the genetic factors that make individual races inherently superior to the others and give them the right to exploit the inferior races. When we openly state the meaning of racism, we can see how inexplicable and unimaginable, such a thought is. But, racism is so deep-seated in our consciousness and subconsciousness that we have long bowed down to such infuriating ideals.

Such instances of subtle racism within a society are rampant and lead to inexcusable behaviour of people towards others. Such unjustifiable behaviour and actions are things like mental stress, social harassment, and even physical assaults. Since we have let racist comments and activities unnoticed, it is left untreated and leads to more division and anger between the two different people of different backgrounds. It is a never-ending, vicious cycle and a massive crisis in today’s world.

We should never judge others for the way they look for the way they speak. All people are born equal, and nothing can change that. Narrow-minded thoughts like racism should have extinguished with the increase in educated people and the intermixing of various races. Still, sadly, such behaviour is the blatant reality and shows no signs of toning down.

Racism makes people feel sorry for being born a certain way, of having a particular skin colour. Racism has no scientific explanation, and the racist people are entirely ignorant about the feelings of other human beings.

No one can choose to be black, white, dark, fair, or anything in particular. God has made us, and there is nothing that should make us feel guilty for that. It is ridiculous and inhumane to make fun of people due to their cultural background or colour of skin.

We keep talking about how modern society embraces diverse cultures and diverse people. We try to accomplish gigantic things like World Peace, eradicate hunger and poverty, but we are not ready to unite to make such changes happen.

Racism is a barrier between the social advancement of our society. It is impossible to achieve something great with such narrow-minded and exclusive ideals. It is a delicate topic and requires people to have an open mind and embrace the changes.

It is possible to eradicate racism in our society if we are more open about such sensitive topics and give simple matters like this a thought. Most of us are way too self-centred to think about such obstacles. It is so commonplace a behaviour that we forget its adverse effects. It is high time we made a change.

Since racism is such a deep-seated belief, we will need some time to change. But, we can achieve anything if we put our mind to it. We do not need racism to divide us. People should acknowledge the fact that to achieve anything significant. We need to let go of narrow-minded beliefs. Only then can we advance as a society of the world. 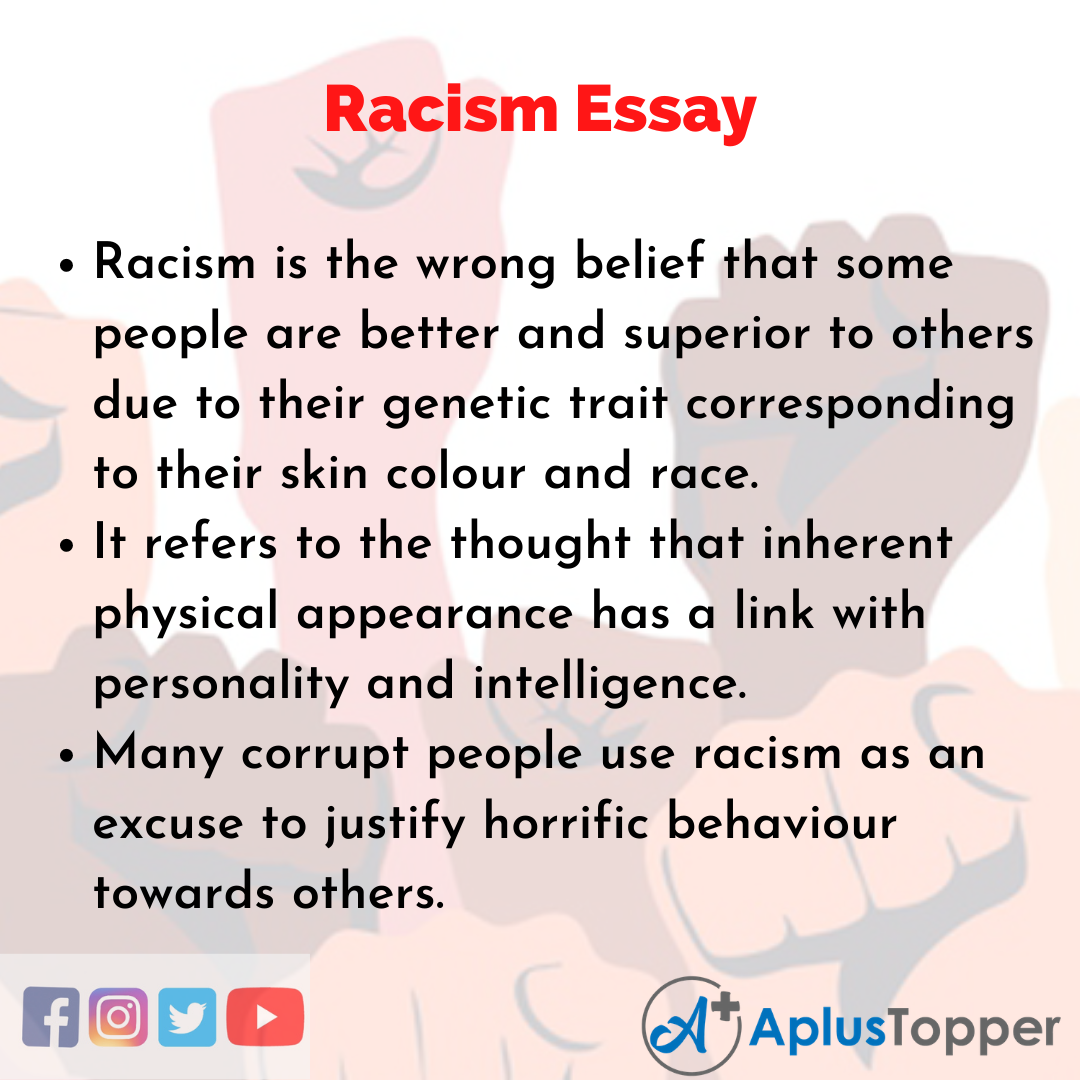 Racism is the prejudiced belief of people that a particular race is superior to others. The idea has resulted from years of neglection and oppression on some races for their traits and skin colour. Racism is a critical social barrier, which prevents our society from advancing.

Racism is a type of discrimination which makes the recipient feel bad about where they were born and how they look. It is an unscientific method of judging people.

Racism is so deep-seated in our culture that we think it to be the norm. The need to eradicate racism has come to highlight after a series of violent activities against people for their race.

We, as a society, need to let go of this narrow-minded thought that some people are inferior to others only because of what their skin colour is. Racism can only be removed by spreading awareness and correcting people when they make a racist comment. Together, we can fight against racism. Let us unite and eradicate racism once and for all.

10 Lines on Racism Essay in English

1. Racism is the wrong belief that some people are better and superior to others due to their genetic trait corresponding to their skin colour and race.
2. It refers to the thought that inherent physical appearance has a link with personality and intelligence.
3. Many corrupt people use racism as an excuse to justify horrific behaviour towards others.
4. The beginning of racism is somewhat unclear but might have originated when migration began.
5. People think that passing casual comments that link people’s work with their ethnicity is a joke.
6. Racism comes in several forms like symbolic, ideological, structural, interactional, etc.
7. Ideas and assumptions about racial categories dictate the behaviour of some people towards others.
8. Racism is a baseless and unscientific method of judging people.
9. Racism is a discriminatory process of thinking which is unacceptable.
10. We must correct people and not let casual racist comments pass when we hear them. Question 1.
What is racism?

Answer:
Racism is hate towards people simply because of their differences. It is the enemy of freedom and should be washed away from society. Racism continues to grow alongside the technological advancements and education.

Answer:
Many people are unaware of their discriminatory behaviour towards their neighbours or peers due to apparent differences in their race. We have become so used to facing racism that we deem it as normal behaviour and let go of it.

Question 3.
Why should we try to wipe out racism?

Answer:
Racism is the barrier between the modernization of our society. There is no place for such unjustifiable behaviour in our community.

Question 4.
What are the types of racism?

Answer:
There are seven forms of racism. Some of them are symbolic, ideological, discursive, interactional, institutional, structural, and systemic racism.