Psychology Essay: Psychology has become one of the most popular and important subjects nowadays. The subject deals with our day to day lives problem. Psychology assists us in understanding the behaviour of individuals all around us.

Psychology’s role is to help us understand why an individual behaves so differently from one another and what is responsible for making them so diverse from each other. The basis of understanding what we do and what others do is explained through this subject.

We provide students with essay samples on a long essay of 500 words and a short essay of 150 words on the topic Psychology for reference.

The scientific study which deals with mind and behaviour is known as Psychology. Philosophers and psychologists mainly conducted the study of the mind. The main distinguishing factor between Psychology and philosophy, which is a very closely related field is that the former subject emphasizes science and particularly scientific methods.

When a psychologist emphasizes on the mind, that means the processes and contents of subjective experience such as thoughts, emotions and sensations. Behaviour is the only thing which can be directly measured; therefore, behaviour and mind are kept separated as long as the action can be observed and measured in a systematic way it may be considered as a type of behaviour. The obvious activities such as gesturing, talking, moving about and the activities of cells within the brain, and internal feelings and thoughts are all considered as types of behaviour.

By studying or knowing some aspects of psychology benefits an individual hugely as it helps them learn not only about how a brain generally works but also how to use critical thinking in particular situations. Although the study of psychology cannot solve all the problems faced by an individual, it does help in offering techniques to handle one’s emotions, eliminates unwanted habits, improves memory as well as positive influences and manipulates a person.

The society shapes the way an individual acts towards any other individual so there is already a psychology present which is taking place. Cognitive and educational psychology helps in demonstrating motivation in someone’s everyday lives dealings and gives confidence which improves the leadership quality of an individual.

The psychologists aim at the study of an organism’s effort to adjust itself to varying conditions both within its environment and itself a because the adjustments to inner and outer urges of the body is a constant process.

Psychology has saturated practically all fields of human behaviour even though it’s very new compared to other sciences. Psychology’s impact has started to be felt in industries, guidance centres, business, clinics and education, and it is no longer just a subject of academic interests.

Depending on their field of specializations, psychologists engage in many things; for example, experimental psychology deals with experimental methods to study human behaviour like how an individual reacts to sensory stimuli, learn and remember things and events, or their actions based on the organic needs or due to their desire for status in society. Physiological Psychology deals with the relationships between bodily behaviour and processes.

Some other specializations in Psychology are social psychology, developmental psychology, clinical psychology, counselling psychology etc. The desire to understand the psychological processes by which a man lives is something that he harboured ever since he was able to think.

Several Psychologist has followed the Pavlovian line of thought and studied animal psychology and experimented upon the phenomenon of resistance, avoidance, discrimination, reinforcements. Numerous psychologists are also working on psychophysiological studies of wakefulness and sleep. Psychology has touched practically all aspects of human and animal behaviour both from applied and theoretical views, almost all over the world. 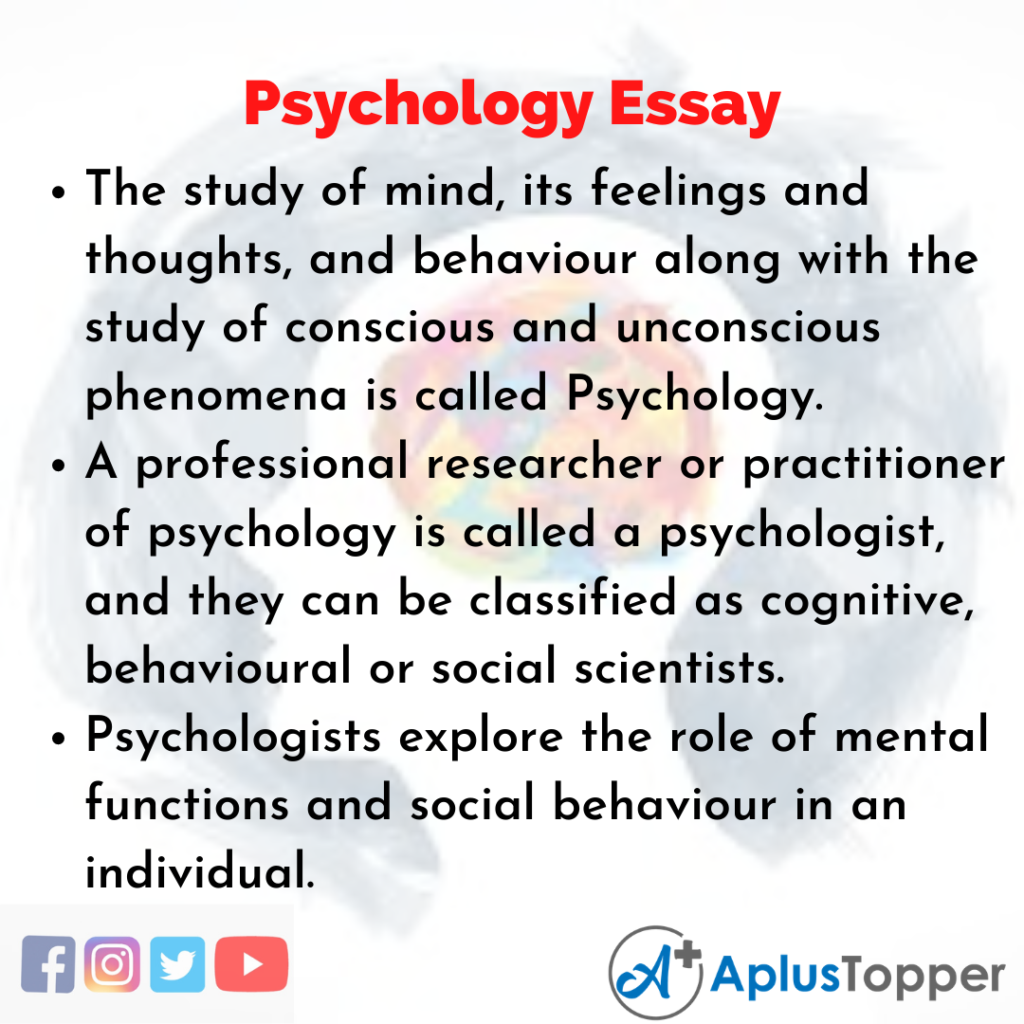 The word Psychology consists of two Greek words Psyche and Logos, meaning soul and science, respectively. Therefore, psychology means the science of the soul. But as the term soul could not be fully understood, psychology is commonly known as the science of the behaviour. Behaviour is an action which can be observed and seen objectively, and it is a very broad process.

Behaviour includes both physical, mental and emotional activities an individual does in his daily life. The collective name of all these activities through which the life manifests is behaviour. Every living being behaves in some way or other as behaviour is universal. An individual may behave differently in various environments.

So the study of psychology is the study of the behaviour of individuals in different circumstances. Some of the most ordinary concepts used in psychology are used to modify a person’s behaviour, including positive and negative punishments, operant conditioning and many more. Psychologists perform scientific researches based on these concepts.

10 Lines on Psychology Essay in English

1. The study of mind, its feelings and thoughts, and behaviour along with the study of conscious and unconscious phenomena is called Psychology.
2. An understanding of the emergent characteristics of brains is sought by Psychologists and all variety of phenomena linked to the emergent properties. In this way, it joins the broader neuro-scientific group.
3. A professional researcher or practitioner of psychology is called a psychologist, and they can be classified as cognitive, behavioural or social scientists.
4. Psychologists explore the role of mental functions and social behaviour in an individual.
5. The underlying process of physiological and biological cognitive behaviours and functions are also something that the psychologists attempt to understand.
6. Cognition, attention, emotion, subjective experiences, brain functioning, personality, perception, functioning and intelligence are all the types of mental processes and behaviour included in research by psychologists.
7. The interaction between individuals, including psychological resilience, family pliability and interpersonal relationship are all explored by psychologists.
8. Psychological knowledge is mostly used to assess and treat mental health problems as well as it is also used to understand and solve problems in various ranges of human activities.
9. Major portions of psychologists practices therapeutic roles in clinic, counselling or schools.
10. Nowadays, psychologists are also employed in industrial and organizational programmes which includes human development and ageing, health, media, sports as well as forensic investigation and other aspects of the law. 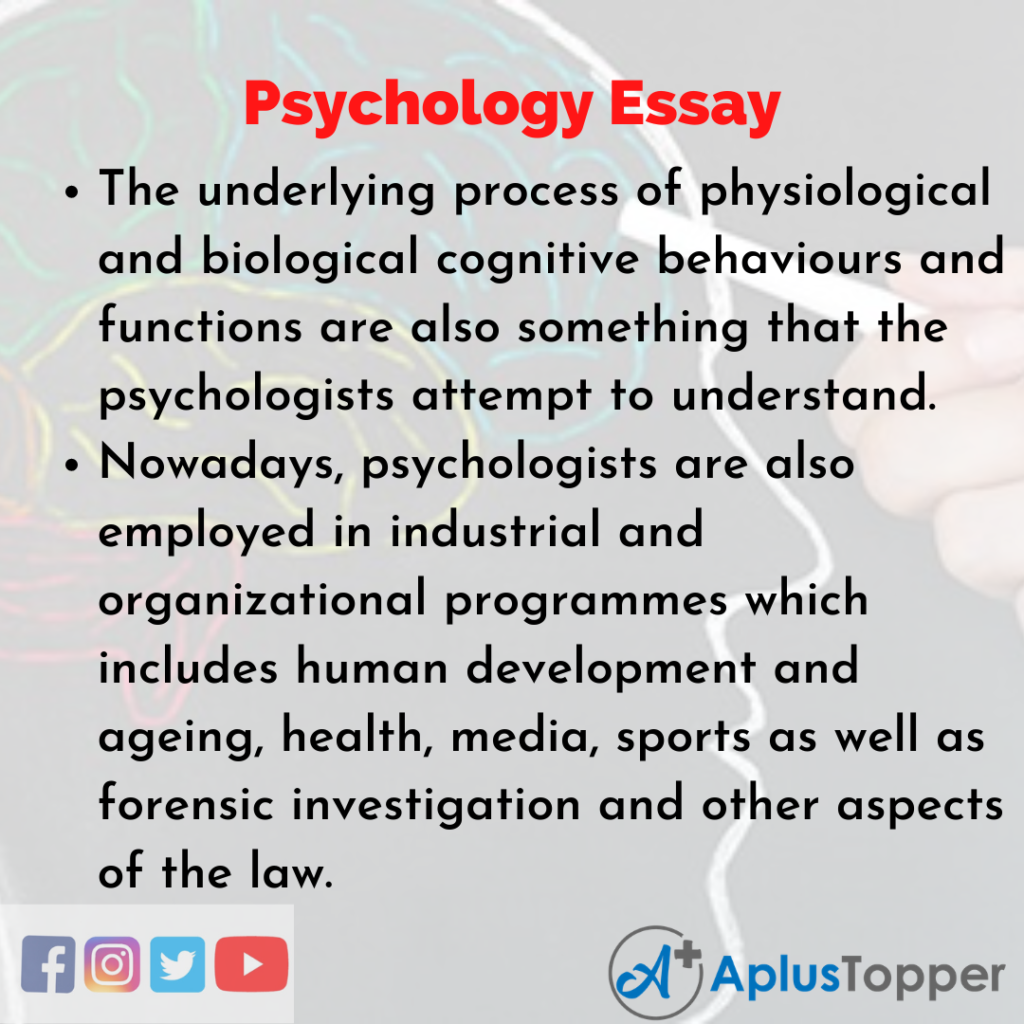 Question 1.
What are the seven major perspectives in modern psychology?

Answer:
The seven major perspectives in modern psychology are:

Question 2.
What are the four primary goals of psychology?

Answer:
The four primary goals in the study of psychology are to describe, explain, envisage and change behaviour.

Answer:
Pure psychology can be explained as a theoretical science which, when applied, is a practical one. The main of pure psychology is to improve and extend human knowledge.

Question 4.
Who is the father of experimental psychology?

Answer:
Wilhelm Maximilian Wundt is called the father of experimental psychology, and he is also the founder of the first psychology laboratory.